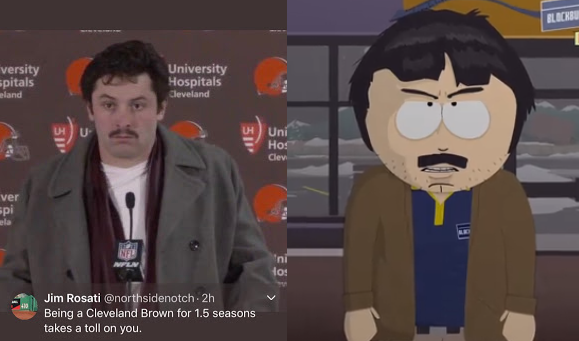 
Yeah seeing Burrow is the only thing that has my attention. I watched a little bit of the Bengals game last weekend. But I was thinking the same thing with another stinker on Thursday night 🤦🏾‍♂️
RE: It's almost impressive how quickly TNF
Jints in Carolina : 9/17/2020 10:43 am : link
In comment 14975210 Mad Mike said:


Seeing the lowly Bengals blow out Baker & Co (the most overrated team ever IMO) would make my night.
Interesting take on the scheduling but, it is more
jvm52106 : 9/17/2020 11:42 am : link
hindsight than on purpose. The schedule was made when people were thinking the Browns, with a new coach and a lot of possible firepower- seriously- OBJ, Landry, Hunt, Cobb, Njoku, Hooper they are all talented players and then the Bengals with the #1 pick Joe Burrow and returning star AJ Green might be a very solid matchup.

Now, the Browns are the Browns so that pretty much took care of that. I think tonight will be a no defense, high scoring affair.
Most of the league and fans
Dave in Hoboken : 9/17/2020 11:52 am : link
were probably wondering why the Giants were in the first MNF game of the year, as well. It's a fair question.
I actually like this matchup
allstarjim : 9/17/2020 12:02 pm : link
I want to see OBJ play again, and hopefully play well. I don't hate the guy, and when he's at his best he's exciting to watch.

I also would love to see A.J. Green put on a show. He's had a long time off and recovering. And of course, intrigued by Burrow, who I think is going to be a great one.

Good RBs in this game with two women abusers and Nick Chubb, lol.
Good game to watch...
trueblueinpw : 9/17/2020 12:08 pm : link
I know I’m in the minority but I love watching pro football and having a game on Thursday night is just fine with me. This is a division game with the number 1 overall pick in the draft starting for the first time on national tv. For the Browns, they’re in a really important game and it’s only game two and it’s short rest. The Browns need this game. The Browns have a lot of talent on and they have a lot of drama. What’s not to like? And these days, what the heck else are you planning? (Put Isles on the big screen and the Bungles v Browns on the PIP).
RE: Most of the league and fans
DieHard : 9/17/2020 12:12 pm : link
In comment 14975335 Dave in Hoboken said:

Also, I still root for Beckham. The Giants have been mostly a dumpster fire since the last super bowl they won. The biggest exception to that was when Beckham was here and producing insane big plays for us. Even combined with a good defense to lead us to the playoffs. He's in the AFC now, so I don't really see the harm in hoping he gets his career back on track. Doesn't affect the Giants (until we play this year that is).
RE: Interesting take on the scheduling but, it is more
RDJR : 9/17/2020 4:33 pm : link
In comment 14975321 jvm52106 said:


I don’t believe that to be the case. The NFL has always put these bad divisional matchups on either Thursday night or Monday night early in the season. Remember, every team gets an appearance on Thursday night or Thanksgiving. And, it still may be a solid matchup. After one week we aren’t giving up on the Giants yet either.
RE: I guess I'm in the minority on a few
Thegratefulhead : 9/17/2020 4:36 pm : link
In comment 14975458 Metnut said:
I am interested as well. Want to see Burrow vs Mayfield and the schmuck in me is down to watch OBJ drop an important pass or 2 :)
Cleveland giving 6 points
montanagiant : 9/17/2020 4:36 pm : link
When's that last time that has happened?
Like someone said I all in on the Thursdays
mpinmaine : 9/17/2020 4:49 pm : link
as long as it doesn't make the % of injuries go up that is.
I play a pool so every game has interest. I have cincy tonite with 5.5.
If I did not play I would still have an interest.

I used to like the Browns cus they got screwed by Modell and they never won a SB, but not so much anymore.

Baker mayfield is kind of a douche, he isn't in the category of A. Rodgers for me but all in all a dick from what I have seen.

Actually gave 11 points to MIA. And covered in all three games.

They didn't, and Giants lost by 1 as 7.5 point favorites.

If Baker doesn't perform well either this week or next week,
Zeke's Alibi : 9/17/2020 5:53 pm : link
the Browns will be looking at QB. The offensive line stinks and he's had too many offensive coordinators, but he's making the same mistakes. Too many dumb decisions improvising. Needs to learn how to play taller from the pocket as well ala Brees.
This is probably going to be the only time I take the Thursday night
Zeke's Alibi : 9/17/2020 5:59 pm : link
road team this year. Still early in season and familiar opponents. Hard to see Bengles winning, but can def see it being a tough one score game.