I'm not an expert, but I recall in the past,that in same scenario, the analytics say to go for 2.

I haven't heard it mentioned at all.

Their D was outplaying our offense all day. We didn't have a powerful back or even a threat of the run in the game so that gives them an advantage vs. a more balanced attack. No matter what the general math says, we shouldn't have gone for it.
Channeling Fiz
Spider43 : 9/21/2020 5:53 pm : link
Take that for data!
Yes the correct move is absolutely to go for 2 here
Metnut : 9/21/2020 5:58 pm : link
It improves your chances of winning the game by a % or two.

However, it's such an unorthodox move that you really can't get on Judge for not doing it. It's not a huge difference per the analytics anyway, so something easy to get over.

The only game management thing of his so far that's really annoyed me are his lame 4th and short wastes of timeouts. We should go for it in these situations. Punts are turnovers and possession is crucial.
Nogain
moaltch : 9/21/2020 5:58 pm : link
what you're saying makes a ton of sense, as there are too many variables, but going for 2 still may be the play there, statistically speaking. I think the forward thinking clubs use the anyalytics a lot more than we do.
The idea of going for 2 after getting within 8
ray in arlington : 9/21/2020 6:05 pm : link
is based on the idea for a team of average ability to make a 2-pt conversion, it is more likely to make one 2-pt try and 1 XP (and win in regulation) than to miss two 2-pt tries and lose in regulation. This was a recommendation even before the extra point was moved back. (I saw it in a journal article in the 1990's)

It has been employed by teams in recent years - particularly the Eagles who used it to get down by 6 but did not get the winning TD.

I think the recommendation only applies if there is only enough time for 1 more possession by each team - i.e. to win the trailing team has to make a stop and score.

An NFL person told me that the analytics people in certain situations want a 2-point try when getting within 9. It goes against the usual idea of staying "within 1 score" but there is a school of thought is that it provides more upfront info about what you will need to do to win.
I don't think it's analytics
pjcas18 : 9/21/2020 6:05 pm : link
it's just smart football that suggests going for 2.

Of course if that were the case CHI probably plays D differently on the final drive defending the 35 yard line instead of the goal line.

And I disagree with NGD - usually if you're struggling offensively, like the Giants, the smart move is to maximize your scoring opportunities, so going for 2 probably the smarter move in the 4th quarter.
RE: I don't think it's analytics
NoGainDayne : 9/21/2020 6:20 pm : link
In comment 14980776 pjcas18 said:


So here is the thing. Getting you to 17-11 isn't that advantageous by your own logic. You are talking about needing to generate 2 scoring drives to tie as the only benefit vs. 1 scoring drive to tie and the bottom line is using 4 downs really helps you especially if you play call knowing that is what you are going to do.

There are a lot of situations that cut the required scoring drives to win in which most cases will have you go for it if that's the case but this doesn't do that, only the need for a touchdown and especially if you aren't winning at the point of attack (see the way the Bears ran on us) it's not easier to get two field goals than one TD.
At 17 - 11
pjcas18 : 9/21/2020 6:26 pm : link
a TD wins it for you. So yeah, in theory you cut the required possessions TO WIN down to 1.

and if, like the Giants, you fail to get the TD and have to settle for a FG, then that FG puts you in a position that another FG ties it. Because obviously it's easier to get in FG position than to get a TD

I don't think it's any more complicated than that.

17 - 10 only means you didn't miss the XP and a TD and XP tie the game, but even if you attempted and missed the 2pt conversion and the score remained 17 - 9 it's still potentially a one possession game.
Ok but then it comes down to probabilities
NoGainDayne : 9/21/2020 6:32 pm : link
and I don't think the Giants that day had a better than 50/50 shot at making one play for 2 yards. That less than 50/50 shot brings the expected value of the attempt below the expected value of an extra point. It's just my opinion there, we can disagree but it doesn't mean either of us have the math or strategy wrong
RE: Ok but then it comes down to probabilities
pjcas18 : 9/21/2020 6:36 pm : link
In comment 14980799 NoGainDayne said:


yeah, I agree and that's a different discussion. Would they make it? IMO that's as much on the play call as it is on the execution.
Total agreement there
NoGainDayne : 9/21/2020 6:41 pm : link
and don't get me wrong, if Judge does that I respect the hell out of him for a gutsy call and going for it.

But it is just as you said as big a bet on yourself as you can get there.

Doesn't mean I think it would have been the right call either because I wouldn't bet on them that day or the week before.

But especially getting two yards you can outsmart your opponent with a call. New England and BB has always been especially good at this IMO.

Would love to see that from Judge this year as a sign of improvement. Conversions where we go "damn odds weren't in our favor that we'd get that but hell of a play call"
when you are down 14 points in the 4th quarter
PaulBlakeTSU : 9/21/2020 6:49 pm : link
and you score a touchdown, you absolutely, beyond a shadow of a doubt, are supposed to go for 2 points on the first touchdown to try and cut the lead to 6. It's simple probability. Kicking XPs gives you a 50% chance to win. Going for 2 on the first TD gives you roughly a 62.5% chance to win, all else being equal.

The odds of scoring a 2 point conversion is roughly half of the odds of converting an XP. By and large, a 2 point coversion is about 48% successful and an XP is like 96% successful. For the sake of argument, let's use 50% and 100%.

No matter the choice, the Giants would have to score two TDs. If they don't, it doesn't matter. So let's assume that they score the two TDs and it just comes down to whether the Giants kick XPs or go for 2.

If the Giants go the traditional route and kick 2 FGs, they tied the game late in the 4th and give themselves a 50% chance to win, effectively.


However, if the team were to go for 2 after the first TD, they actually give themselves a 62.5% to win. 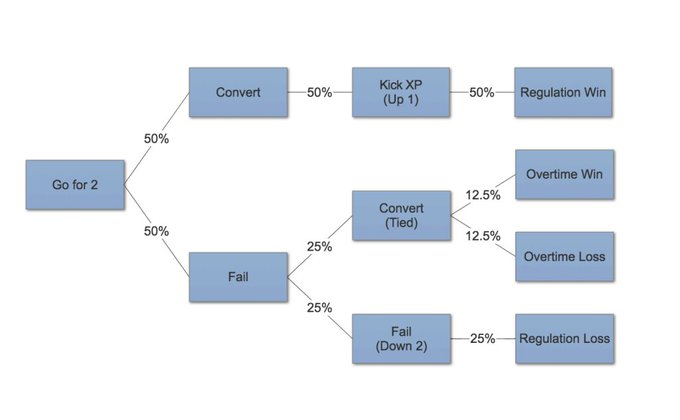 As the chart shows, if they convert the first 2pt, then they'll win the game on their second TD because they will convert the XP. This will happen 50% of the time.

I would say the general math doesn't really apply here because of the following facts:

2) The Bears defense has been above average this year

There is one thing working in favor of the Giants which is a mobile QB but other than that I don't think there is anything to even closely offset these major disadvantages the Giants have vs. the general math.

There is no reason to think the Giants could use general numbers like yours because the expectation that they would perform in the center of the distribution (or close enough to the center that those expected values matter) I don't think holds given my above facts.

But again, I'm just someone that thinks it's good to see the math and know as much of it then use your judgement. But IMO when you are dealing with enough mitigating factors you just need a better model that accounts for more of that not just a historical analysis.
To your point, opponent matters
BH28 : 9/21/2020 9:19 pm : link
If you are playing the chiefs, are you really going to leave it up to a coin flip in OT? You know if they get the ball first, high probability of game over.

If you have the chance to steal the game in regulation by going for two, you absolutely take it.

Watching the chargers/chiefs Sunday, i have no clue why Lynn punted in OT. You knew as soon as the chiefs got the ball it was over.
I believe
moaltch : 9/22/2020 9:57 am : link
the math takes into account all the scenerios, including when an inferior offense is going against a top defense, and vice-versa. The numbers are derived from all, hence the results.