Beezer : 10/16/2020 10:59 am
Four winnable ballgames out of five. Playing with no run game, at BEST mediocre receivers, inconsistent TEs, and an O-line that MIGHT be something eventually, but is decidedly NOT so much right now, a depleted secondary and barely a pass rush ... AND an entirely new coaching staff and plan. Oh, and toss in, no real pre-season at all.

Played the Steelers tough. (Led them until just before halftime. Wasn't out of the woods until less than 6 minutes left. More first downs, 20-19.)

Should have beaten the Bears. (Shit first half. Made a run in the second - shut them out after halftime. More first downs, 22-18.)

Had every chance to beat the Rams. (Trailed by 4 at the half. Cut it to 1 point just into the 4th. Still within 8 the rest of the way. Again, more first downs, 19-15. Offense outgained LA 295-240. Ran the ball decently. Won time of possession by almost 7 minutes.)

I'm a realist. I know this isn't a good football team. But ... we've been in FOUR GAMES!

Flame away, but I didn't sign up for the rose-colored glasses this year. Didn't expect much. While frustrating as hell to lose these close games, WE'VE HAD FOUR CLOSE GAMES!

Damn ... channeling my inner PIRANHA there for a sec. WHO'S WITH ME! 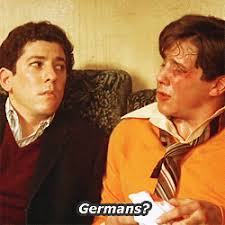 Wouldn't say I'm excited for this game. Trying to see it pragmatically. As it is, versus the dragged-down negatives on this board and more so, away from this board. Lots are content to say "the Giants suck" and leave it at that. I'll keep watching. Losses and even shit shows can't hurt me. I lived through the '70s teams. I like that the team is playing hard. Even if they're not so good right now.
I will keep watching
Giants86 : 10/16/2020 11:42 am : link
Its been rough to be a fan of this team
ebbs and flows my man
UConn4523 : 10/16/2020 11:44 am : link
they stink, is what it is. Not going to let it get me down. When things get better I won't be going crazy about they either.

Actually we'd be exactly what the Bears are right now, a less than average team with a record that doesnt represent what they really are. Those fans are going to be let down big time
This is where my mindset is as well
bigblue5611_2 : 10/16/2020 11:51 am : link
I still get excited to watch, I like seeing the competitiveness this year vs getting the doors blown off too many times the last couple years as well as the in game adjustments that also seemed to be missing the last couple of years.

Disappointed after the losses but I don't get as down about them as I used to, I just carry on...

Unfortunately it doesn't mean the Giants are close to have a winning team.

But enjoy your Friday!


Agree. Even at 3-2, or HELL, 2-3 and they'd be tied for the division lead with Washington next, there could easily be delusions.

Similar to what Bills fans went through for many years - the hot starts and the almost clockwork fall-off. Is it happening to them again after playoffs last year? Or are they decent? Better bet might be them returning to form.
A sad thread
giantstock : 10/16/2020 12:02 pm : link
Please someone remind the OP that we lost. We lost. I don't think he understands the objective is to win games. This is what happens when you stink for so long. You accept losing.

Let's twist this around --

1-- We lost to the Bears backup QB.
2-- We lost to the Cowboys 2nd string OLINE and couldn't beat them with their backup QB playing near half the game.
3-- We're favored in this game and maybe two others the rest of the way? Something to be proud of as a fan after 3 years and being in a division historically bad? -- Ohh wait minute - we might be favored vs Dallas in the last game because they might not give a damn. YES!!! YES!!!! YES!!!! NOW I PUMPED!!!! (sarc)

-- We're a bad team. Being this bad for so long - you need wins in which you show something you are good at. Or in the close games what did they show other than "they paled hard?" They haven't yet showed something that they are very good at.
Clearly I'm not comparing THIS team to championship teams
Beezer : 10/16/2020 12:03 pm : link
from the past. But here are the games for two teams that ended within one score:

That's 11 regular-season games for that great squad, coming down to one score being the difference.

So that team had 10 games within a score.

Acknowledging that this isn't a good team.

Did you expect wins this season? How many? I think the writing was on the wall.


In my humble opinion, all i really care about is more super bowls. the only thing that winning the division in a year like this would do is give everyone a false sense the Giants are "close" But more overhall is really needed, so in order for them to get to where they really need to be, we have to have a miserable year like this. No one from the NFC East is going to make any noise in the playoffs this year.

I'll agree that there are a lot of things i'm seeing that I like, especially on defense, and in regards to coaching. But man the roster is far far far away from having the pieces in place to show what Judge can really do.

i'm just saying at this point the better the draft position the better for the future (Only if Gettleman is not involved, he seems to get very little right draftwise)
RE: I just cannot get hyped up for a Giants game any longer
Sec 103 : 10/16/2020 12:15 pm : link
In comment 15010410 Jints in Carolina said:

Who is the Bears starting Qb right now? He's better than the Qb Giants faced, right?
This is the epitpah of all bad teams
HomerJones45 : 10/16/2020 12:42 pm : link
We are 0-5 in a League where everything is designed so every team can be "competitive."

You aren't "competitive" when the other team treats you like a preseason opponent (as the Rams did when they used us to tune up their running and short passing games -two screen passes inside our 10 FFS or the Steelers did to shake the rust off Ben R before beating us to death with Benny fucking Snell).

Whenever the opponent needed to score or control the ball, they have stopped our offense or shoved it up the defense's ass. That's what happens to bad teams.

In 1972, week 13, the undefeated Dolphins played the Giants. The Giants scored the first td and at the half, we were down 3 at 17-13. It stayed that way until the 4th quarter when the Dolphins managed a couple of field goals and won 23-13. Ok, we hung with the mighty Dolphins! We are on our way back! The following season, we were 2-11-1.

Recognize when the opponent is superior and just putting in a workmanlike effort to get their W and move on to the next week. A close score doesn't mean you are any good.
Yeah they stink
Harvest Blend : 10/16/2020 12:49 pm : link
but at least the games aren't over with 8 minutes left in the second quarter although I'm sure they'll be 4-5 of those before the season ends.

At the end we met at the net and shook hands, at which point he said, "Well I lost in straight sets, but at least it was close."

The Giants are 0-4. The fact that they weren't blown out and have been "in" games doesn't really mean that much, because they lost every game.


Yes sir, but it's all we got. Relax, it was an innocent comment.

2018: 1-7 start. Five one-score losses and a "we were hanging in there against the Saints for 3 quarters." Six moral victories.


Who is the better QB?

Which QB are the Bears better with?

So on this thread you were looking to build up the Giants but you want to close your eyes to the fact that they could've won vs a team not at full strength?

I guess then if you were a Jets fan and took the same view you are doing here in which the last two weeks vs the Browns and Pats in which they used most of their 2nd stringers and the Jest ended up keeping the score close, you'd send the same type of post out like you did on here?

I guess it would be the same too come week 15 - Falcons vs Chiefs - if Mahomes and many other starters benched and Falcons kept game close - it would be something pretty terrific for Falcon fans to be proud of leading into next season?

So in these cases - using your scenario - The Browns, Pats, and Chiefs - - if their "backups started" actually they aren't backups and the fans of Jets and Falcons should be proud "because they went head-to-head vs the opposing team's starters" even though players like Mahomes, Mayfield, and Newton didn't start or play?
it's just sad
MookGiants : 10/17/2020 2:05 am : link
to read posts like this at this point. Basically celebrating that they didn't get blown out.

The fans have taken on the loser mentality that the team has had for a while now.

This team does one thing well, lose. They are shit at just about everything else.


What's even sadder, IMHO, is that the long time struggles this team and fan base have endured has blinded so many of us at BBI to the sea change this franchise has undergone with the hiring of Joe Judge and his staff.

Call me Clytemnestra if you will, but I see a far brighter future in the not too distant future. Not only W/L based, but the way this team will play, a return to Giants' Football.