Does Wentz have a horseshoe up his ass?

It's not exclusively against the Giants either. Same shit happened last week against the Ravens.

Watching him is infuriating, he seems like he should throw 4 picks a game and never does. Anyone else feel this way?
Had a huge post in my browser
Sonic Youth : 10/23/2020 2:07 am : link
and hit back by mistake on my trackpad which cleared it out, FML...

Wentz sucks. He's regressed incredibly since 2017. My Dad told me he'd never be the same after he got hurt in '17 --- which I thought was hilarious bullshit, since it looked like a thigh bruise from my memory as he was diving for the end zone -- but as usual, Dad was right.

Idk if it's his confidence, or getting jittery bc he doesn't want to use his mobility, but he is not remotely the same QB he was when he was actually good.

The eagles are 2-4-1 in the worst division since the 2002 realignment (and maybe all time) -- Wentz sucks, the Eagles suck, they just will probably suck less than everyone else in the division.


He played his best football when he had Frank Reich as the OC. Has only gotten worse since.
Wentz
broadbandz : 10/23/2020 7:17 am : link
is a fucking bottom tier qb. But our defense made him look hall of fame worthy.
You do realize how decimated the Eagles O...
bw in dc : 10/23/2020 8:12 am : link
has been the last two years, right? And despite that, Wentz and Peterson are able to patch together an offense that can move the ball basically against every team in the league. In the last two weeks prior to last night, they’ve put up 68 points combined versus Pittsburgh and Baltimore. Two of the best defenses.

Wentz is a gun slinger. Similar to Favre. And he takes way too much risk. A habit that just seems part of his DNA. He must be maddening to root for.

But he is also a great play maker who has demonstrated an incredible ability to make chicken salad out of chicken sh-t. And he can make some unbelievable clutch throws. There is real top-five-in-the-league ability there.
He made the game winning throw on a perfect pass
Saquads26 : 10/23/2020 8:16 am : link
But other than that yeah he sucks
Wentz’s across the field throw
UConn4523 : 10/23/2020 8:18 am : link
that he had no business making is the epitome of his career, IMO. Like bw said, very favre like but nowhere near as good.

When he made that throw, it’s one most QBs get picked off. Of course we didn’t, it was just incomplete. He’s definitely one of those players who makes all the mental errors to thrnover three ball the same amount as Jones does but for whatever reason the bubbles typically go his way, it’s odd.
Wentz is really bad
Jim in Forest Hills : 10/23/2020 8:49 am : link
I honestly thought he was a top 5 QB, but he's not that. Such poor decision making and some godawful throws.
Yes
pjcas18 : 10/23/2020 8:57 am : link
in fact, x-ray below. 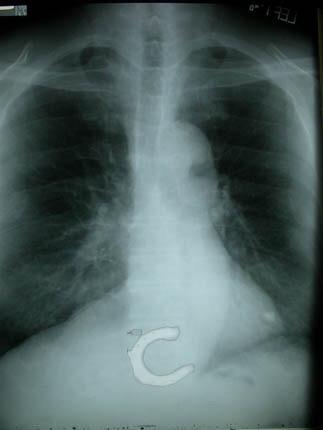 
I respectfully disagree. I think he’s one of the toughest, most resilient players in the league, who gets hit more than anyone but keeps surging forward — yes, making mistakes, but also making huge plays. Wish we had someone, anyone, with that kind of will to win. I’d love to bury Wentz, but he’s gonna be a thorn in our side for a while.
If this horseshoe thing is true
terptacular : 10/23/2020 9:08 am : link
You have to admit that he moves around really well considering.
so wentz is garbage
djm : 10/23/2020 9:11 am : link
what is Jones then? I cant wait to hear this.
let me tell you all something right now
djm : 10/23/2020 9:15 am : link
if the Giants were offered Wentz for Jones straight up at this moment, the Giants would piggy back Jones to Philly to make that trade and if they didn't, every exec responsible would or should be punished drawn n quartered style in times square due to neglect.

Wentz wins games. Jones loses. Wake me up when that changes. And please, save me the BS about talent. Philly fucking blows on offense. Yet Wentz delivered in a must win spot.

You know what, until we do one thing right with one big player we are not allowed to talk shit about better players on other teams. Just zip it already.
down 11 to a division foe
djm : 10/23/2020 9:17 am : link
does ANYONE here truly think Jones wins that game? MAybe he does so 1-20 times, like he did against a shite Tampa team last year. ONE time out of 20. WOOPEEEEEE.

Wentz is twice the QB Jones is.
RE: You do realize how decimated the Eagles O...
HomerJones45 : 10/23/2020 9:20 am : link
In comment 15021264 bw in dc said:
When he stopped trying to win the game by himself, the Eagles blew through our vaunted defense. Two td's in 6 minutes, overcome an 11 point lead throwing to the 3rd string blocking TE, the 3rd string RB, the 4th and 5th string receivers behind a patchwork line.


Two things. Wentz is definitely a legit franchise QB. He just has the uncanny ability right now to keep his team and the other team in the game. If Moderna can find a vaccine for that Wentz will be back in the conversation as one of the league’s best.

He hasn't been healthy for ALL of 9 of those games, but he's only lost one game to the Giants.


He can beat our ass and still not be a top QB. I mean, aren't other QB's beating us too?

Wentz goes through stretches where he looks lost. But his arm talent an escapability make up for that in part. He makes a lot of bad decisions, and is always injured - those are facts. Just because he keeps beating a bad team (us) doesn't change it.
Wentz has elite physical ability
Greg from LI : 10/23/2020 10:02 am : link
Which helps him overcome his mental shortcomings. He makes awful decisions over and over again but throws his way through them.
If you listen to people around here
HomerJones45 : 10/23/2020 10:06 am : link
They seem pleased that "we are in every game" and the "defense keeps us in the game"

Obviously Jones didn't do enough to win the game because we lost. 187 yards passing 6 yards an attempt, a pick and 90 yards rushing were ok but not great. There were vast stretches of the game last night where we were a 3 and out machine. This is Jones. The offense goes nowhere for several quarters, he puts together one nice drive and that's what people around here remember, forgetting all the 4 yard passes and 3 and outs along the way. This is an Eagle defense that has given up 27, 37, 23, 20, 29, 28 points this season. It gave up 300 yards passing and over 400 yards of offense to those two immortals Mullens and Beatherd. So, Jones was ok but he needs to be better.
RE: Wentz has elite physical ability
BillKo : 10/23/2020 10:10 am : link
In comment 15021545 Greg from LI said:


Jones is a very good athlete with good size for an NFL QB.

But these results keep rolling in where Jones just doesn't make enough plays in a game to create wins. He is looking more and more like a QB who is more game manager than play-maker. And will need many more parts to optimize what he can possibly bring to the table.

More simply put - I think we are seeing that his ceiling is much lower than many thought.

And, yes, Engram had a key drop. But that one more play doesn't offset so many others where Jones hasn't delivered.

During the telecast, Aikman said one of the dumbest things I have ever heard. He said when Jones has time and open receivers he is "one of the best in the league." I nearly fell out of my chair. Like nearly every QB in the NFL won't succeed under those circumstances...??

The true difference makers in the NFL don't need optimal circumstanced to succeed. They throw receivers open, they buy extra time, they find the 3rd option, they instinctively avoid a rush, they come up big on critical third downs, etc. I don't see any of those results by Jones on a consistent basis to suggest he's the right guy right now for this organization to hitch their wagon to...