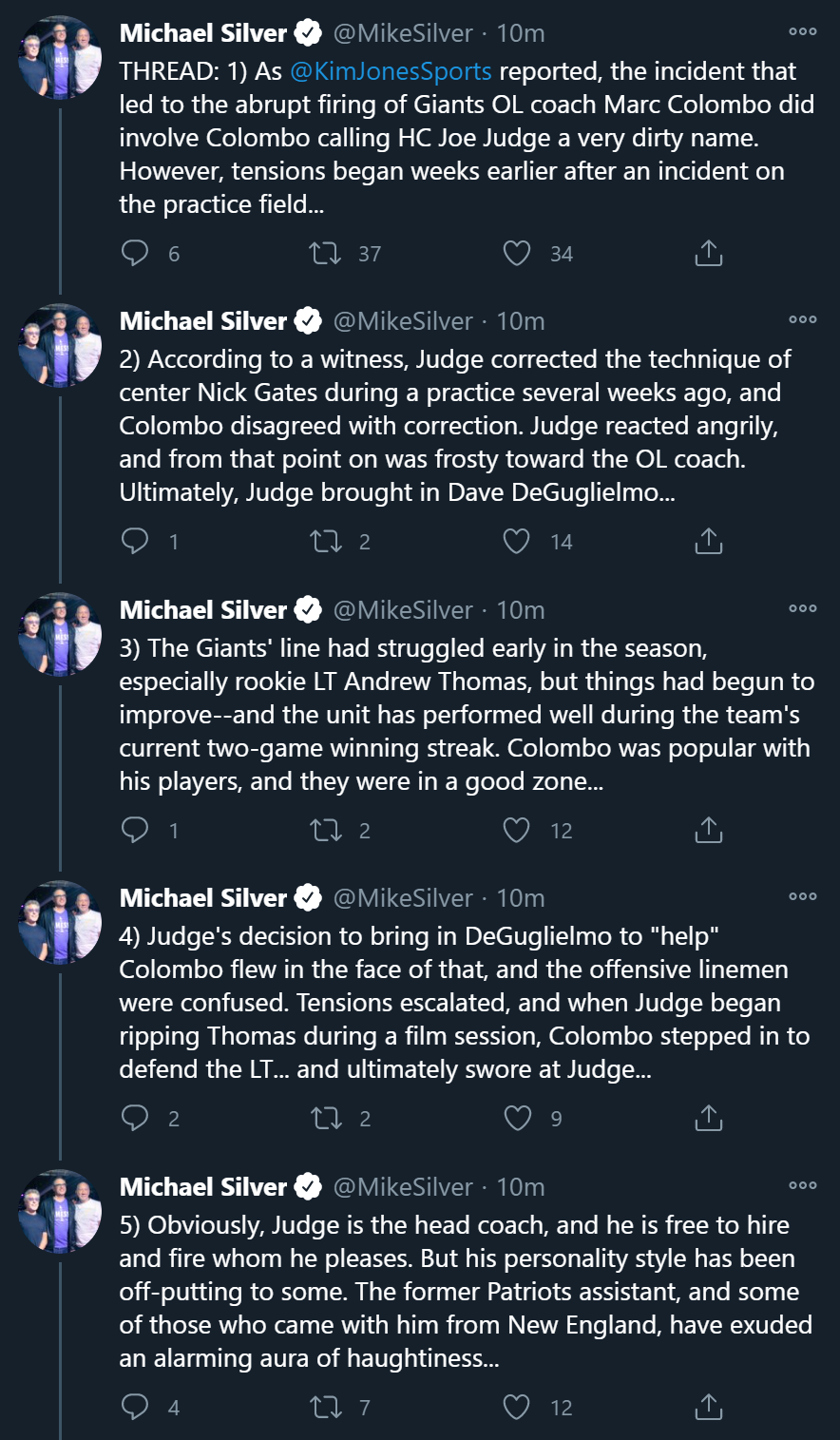 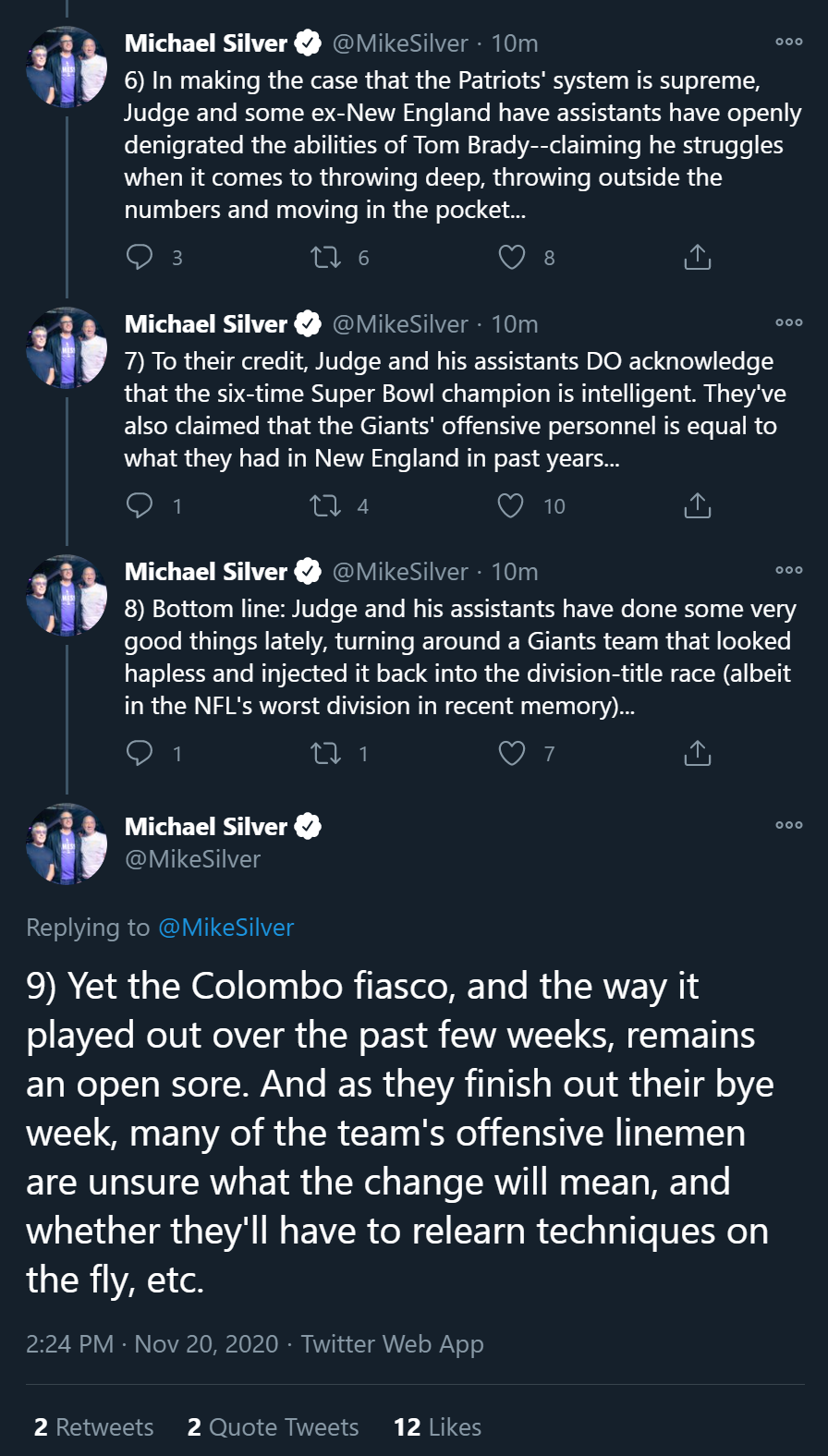 
The improvement coming when Judge got involved is what I’ve heard from several sources. All he wanted to do was hire a consultant to hold Colombo’s hand....his ego didn’t like that so there you go. He asked for it. You don’t cuss your boss out. I don’t think too many bosses do well with that.
Its a BYE week with nothing but
jvm52106 : 11/20/2020 4:23 pm : link
good stories (can't have that) about improvement or bad stuff like Covid and this.. They went with this.

Clearly this stuff started a few weeks ago (and seems about the time former coaches of Thomas were commenting about technique changes here) and then culminated this week.

The Brady stuff is childish bullshit and yes, seems like that came from Colombo. I have zero way of knowing what was said or not said but, I will go with the HC who so far has done things very deliberately and very much by a process and I highly doubt he now decided to act personally to get a buddy brought on board and do something rash in the middle of the season. You disrespect you walk! Seems pretty simple to me.
This situation will speak volumes for this HC
GIANTS128 : 11/20/2020 4:24 pm : link
Lets see how he handles it internally and publicly. He may look like a genius by the end of the season or this will be a terrible move. My take is MC was not his guy. Maybe he was Garretts guy. That makes we wonder how that dynamic will go. However the way Garrett handled Jerruh...this is nothing in comparison.
The ass't offensive line coach stayed
WillieYoung : 11/20/2020 4:25 pm : link
Enough said. Jason Garrett may let Jerry Jones and every other person with an opinion contradict his authority. Joe Judge isn't going to.
RE: a couple thoughts on this
montanagiant : 11/20/2020 4:28 pm : link
In comment 15052400 Eric on Li said:


Sure have. And has a boss ever, rather than firing an underperforming employee outright, taken steps to try to improve the situation first?

that is some petty shit dropping that in addition to making him sound like a dick in the film room.

I don't have any personal attachment to Marc Colombo - I don't care that he was fired. What I care about is whether Judge is breeding the right culture and relationships amongst is coaches and staff.
RE: From Art
Toth029 : 11/20/2020 4:50 pm : link
In comment 15052517 McNally's_Nuts said:


Yup. But so many here gotta be Devils Advocate.
Coaches talk smack about opposing players and teams
DieHard : 11/20/2020 4:53 pm : link
behind closed doors all the time. Like when Antonio Brown surreptitiously filmed Mike Tomlin shit-talking the Patriots in the Pittsburgh locker room. I'd be more concerned about the person leaking this stuff than the actual content (if it's even true).
RE: RE: RE: RE: RE: RE: RE: I wouldn't be so quick to dismiss a report like this.
BlackLight : 11/20/2020 4:54 pm : link
In comment 15052520 eclipz928 said:

Not surprised a few posters who love to bash the Giants accepted it sight unseen
RE: RE: RE: I wouldn't be so quick to dismiss a report like this.
LakeGeorgeGiant : 11/20/2020 5:14 pm : link

Stepping on his toes? Judge is the head coach. He can tell the OL whatever the hell he wants.

Columbo's OL was shit, he wasn't doing his job well.


How are you expecting him to win with such a flawed roster?
The O line
joeinpa : 11/20/2020 5:42 pm : link
Are professional football players. They want to perform and keep their jobs. Colombo is gone, they will embrace the change.


exactly. i've seen it a ton of times in business. an executive gets fired and thinks his "people" will be upset. in reality they only compare about their own jobs and performance. i expect our OL to step up and continue to improve.
RE: RE: A lot of stuff leaking out
japanhead : 11/20/2020 6:56 pm : link
In comment 15052575 Thegratefulhead said:


This. Plenty of assistant coaches get fired midseason, nothing new.
LOL Silver Hates the miilirary communist
big canoe jeff : 11/20/2020 7:33 pm : link
Called him out on Twitter when he accidentally slipped with military fly over live at halftime working a college all star game on nfln on open Mike “what’s going on with this Shit” blocked me ASAP glad the guy working for shit
RE: I don't expect him to win with this current roster
BigBlueShock : 11/20/2020 7:50 pm : link
In comment 15052560 eclipz928 said:

I’m sure Joe Judge would be heartbroken to know some random guy on BBI refuses to give him the benefit of the doubt. It must really suck to go through life that way. And it’s also obvious by your posts that you are not a fan of Joe Judge, just own it.
RE: LOL Silver Hates the miilirary communist
BestFeature : 11/20/2020 7:53 pm : link
In comment 15052637 big canoe jeff said:


What???
Good for Judge coaches need to be accountable
big canoe jeff : 11/20/2020 8:00 pm : link
Has balls MC insubordinate needs to be fired Guge a competent oline coach previous HC’s didn’t do shit
Does anyone actually believe that
ryanmkeane : 11/20/2020 8:01 pm : link
Judge would talk about Brady like that? This seems absolutely outlandish. “Well...he IS intelligent, I’ll give him that....”

My guess is this is what they discussed when coaching up for the Tampa Bay game. They were breaking down his strengths and weaknesses and this was blown up by Colombo's camp to shed a poor light on Judge. But who knows. Truth is usually somewhere just left/right of center... lol
Why exactly is this such a big
section125 : 11/20/2020 8:29 pm : link
deal that would put posters at each other's throats?

Colombo wasn't getting it done. He got on Judge's wrong side. He got fired, instead of just working along with it. Now, with these antics he is going to be hard pressed to find a coaching job in the NFL and maybe even college. That he "liked" a tweet about Judge getting belted is really going to look bad - one of those social media moments that potentially sinks a career.


I mostly agree with your first paragraph.

However, if most of the reporting is true, and there was a confrontation split, that is newsworthy; and a big deal because our OL has been a major problem for a long time.

It is not a big deal because:

1.) Apparently Colombo was not getting it done the way Judge wanted. When corrected he argued and became spiteful(to be fair both probably did)

2.) He is being replaced by a much more experienced coach who will likely be doing what Judge wants

3.) If the line only started to improve after Judge stepped in, then it should improve even quicker now that the teaching environment improves

4.) Football players have many different coaches over their careers. The best learn from all, adapt and improve. This not a change of offense, just a change of voice. Technique should be mostly the same but how to best achieve it will be taught differently.

5.) Remember when Parcells used to cut one veteran late in camp? He did it to catch the attention of the rest of the players. If the players are smart, they will realize that if Judge is willing to fire a coach, he is more than willing to cut them if they don't perform as expected
The OL has sucked most of the year
WillVAB : 11/20/2020 9:24 pm : link
Colombo isn’t a loss. If Judge’s involvement in the OL is true then it’s a win Colombo is gone.


Simple. In the event that Judge doesn’t work out here and gets fired for being another bad Giants HC, those who think he was out of line in this 1 scenario will look back on this as their “I told you so” point.