mittenedman : 11/26/2020 10:26 am
Only a specific group of players — “Scout Team Players of the Week” — were eligible to wear these unique jerseys and it’s safe to say they all made solid choices.

This is just another clever way head coach Joe Judge educates his players on the history of the New York Giants and incorporates that history into everyday life in East Rutherford.


I have a few I purchased through the years off of eBay..Keep checking..
My lengthy analysis for perspective
jamison884 : 11/26/2020 12:12 pm : link
I felt compelled to reply on this topic due to the potential for various fans not considering this minor change as significant.

Short version: Judge is a brilliant coach based on my practical professional experience and his methods of applying business management principals within his team. To win in the NFL, the recognized pattern is essentially the need for a truly passionate coach fully engrossed in football 24/7 and no limit on the time put into the team; Judge is that coach.

Long Version: I attempt to analyze and make analogies related to my personal experiences and challenges, from experiences within the competitive gaming scene, in addition to overall business operations per my industry. Judge has proven to consistently find efficiencies via brainstorming and ambition. This is the mindset of success across all industries. Judge is our coach. we snagged Moby Dick instead of a sardine (as in prior years).


My life experience adds up to a couple decades in widely varied industries, from a PC sole proprietorship in my teens to accounting/auditing/financial analysis/consulting/supervision/mentoring experience in both the gaming industry and at a public CPA firm. About a decade of that time involved direct supervision and mentoring duties for both volunteers & salaried employees.

Judge's idea, based on my knowledge of NFL history, where I assume this hasn't been done before, is quite brilliant and should not be overlooked by considering this to simply be a minor change.

I spent a few years playing semi-professional PC game titles, and I was not only responsible for overall strategy, but also making roster decisions and ultimately applying their strengths based on their skill set and also recruiting the top talent within the respective game. It's not the NFL, but the theories determining the best outcome is essentially the same.

It got to the point where we had to create an entire second team (similar to a baseball farm team, or in this example, the expanded practice squad), as we were ranked #1 in the world, had players begging for a tryout daily, and simply not enough roster room to evaluate new talent on the starting roster.

This was an absolutely critical and relatively revolutionary innovation back in the early to mid 2000's. This is all occurring just a few years prior to E-Sports exploding with sponsors, prize money, Twitch streaming, and full-time contractual players on top teams worldwide making around $100k salary on contract, plus a percentage of prize money won. The prize pool varies by game, but the largest annual competition is the DOTA2 Invitational (to the best of my knowledge since I stopped gaming a long time ago). The prize pool for the past year was around $40 MILLION for this one event. In other words, my team was part of the beginning for E-Sports to quickly trend upwards and attract the necessary number of paying fans to warrant the profession and emerge as a new industry sub-sector growing from the foundation of gaming in general, on a worldwide basis.

All of that information is for the purposes of trying to enhance my evaluation of this subtle change and attempting to give the fan base a smile today.

Adjusting our approach via the creation of a farm team, in order to adjust strategy, rosters, and assignments versus our farm team, resulted in keeping our new bespoke "game plans & schemes" secret, and not being forced to have scrimmages with other top teams while giving away our planning (just as in the NFL, their was post-game recordings to evaluate strategy and performance).

This led directly to our successful championship resulting in a $40k 1st place position for a team of 8 dudes. Airfare and hotel to San Francisco and a $500 stipend were given to all players. This included being one of only 4 international teams invited by the actual game developer and publisher (DICE Studios & Electronic Arts, respectively). It was one of, if not the first "E-Sports" tournament broadcasted nationally via DirecTV in 2007. Sponsors included Microsoft/X-Box and Mountain Dew among others.

During online competitive play that season which didn't involve prizes, our starting roster won the online championship (the top teams were selected for an advanced division of peers, so it wasn't an open tournament). Meanwhile, our farm team also won their respective tournament where registration was open to all other teams. The point being, our farm team was created in order to enhance the capabilities of the starters, but they (practice squad in this analogy) also improved considerably in addition to motivating the starting roster. Inter-team competition in order to enhance the suited up roster breeds improvement; the desire for recognition and ambition to stand out as a "farm/practice squad" player and moving up to replace a starter breeds championships.

One more fact also translates to the NFL in many regards. Despite our hope to improve via development of coaching up talent of this farm team, no one actually moved up to the starting roster. If you eliminate injuries in the NFL (not applicable to gaming), the results are consistent with the NFL, where few practice squad players reach All-Pro levels after years of development. However, it still benefits both groups of players.

If you made it far, thank you, as I hope this improves your confidence in our NYG's and provides my personal contextual experiences to those who may not see this as insignificant.

This subtle change by Judge, to recognize practice squad performance will absolutely increase the success of the team over time. NFL players are professional, passionate, ambitious, and extremely competitive by nature. A tiny adjustment like this will enhance team efforts overall and not just within the practice squad. You know our secondary will want to perform better when QB2 is wearing a Gifford jersey. Even if it's subconscious, it's a mental smack to the head to recognize brilliant careers of past NYG players, and results in all players to work as hard as ever in order to reach that level of excellence. This doesn't work for every player obviously, but it's still useful to recognize the subset of players not displaying the general motivation of their teammates, and ultimately those players will be traded or released.

Judge has been mentored for this job by the best minds in football over a long period of time, and I have not witnessed a single mistake since the day he was hired. His public display of coaching, management, providing motivation, increasing collaboration/teamwork, acknowledging the overall success & failure is squarely on his shoulders (and isn't afraid of making difficult decisions given the league-wide status quo; the Columbo firing as an example), and constantly looking for tiny efficiencies. This translates to the business world equivalent of a top CEO groomed for that role, while still having a higher ceiling for growth, while already being the executive at a Fortune 500 company. Combine this with Judge's age, he'd be considered a prodigy in business. I know there are younger coaches, but again, this is all for perspective.

New York Football Giant fans: we have our coach for many years to come, as long as GM decisions improve and his technique is maintained.

Take pride in this, and on this day in particular, be thankful for our coaching staff. Just imagine what a full offseason could have done to help this team, and no, it's not just worth one extra win. I'm convinced it would absolutely result in the #1 spot in the NFC East given all else being equal. More time for the offensive line to gel, more time for QB1 to learn a new offense, more time to build the team chemistry we've witnessed the past few weeks, such as the Jones rushing TD with perfect execution of blocks by the line, WR's, and TE. 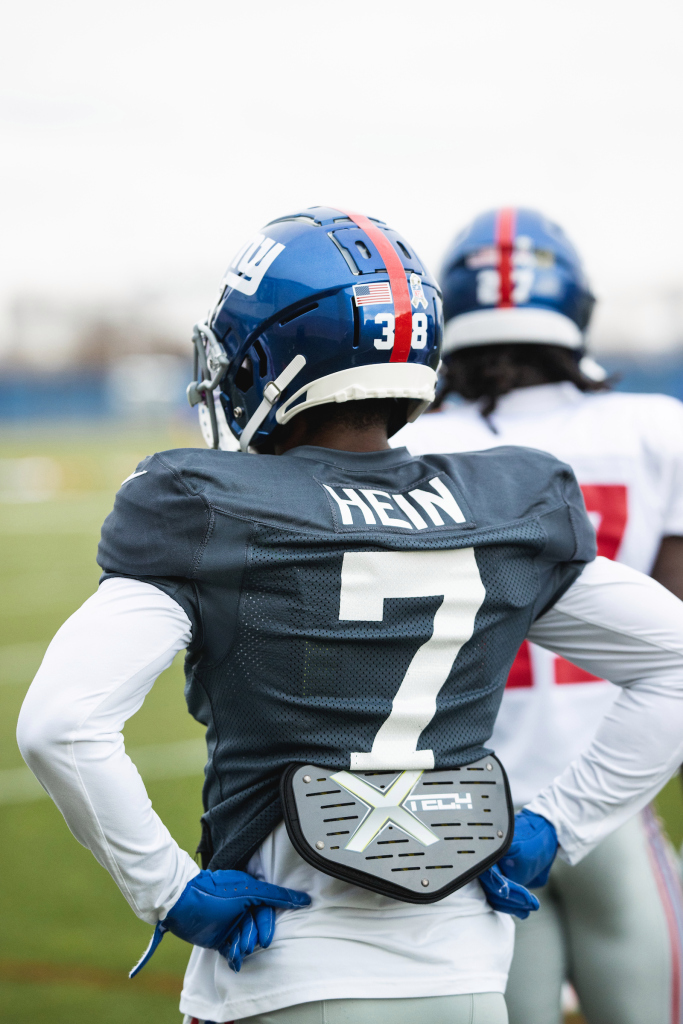 
YES!! With the old blue color on the helmet, too!