If you are stating facts then give it context. McCarthy benefitted from having one of the best QBs ever. He missed team meetings to get massages. And after he was hired he admitted to lying in his interview at his introductory press conference about watching film on his year off.

You can literally say, he gave the game away with those two calls.........otherwise they are probably within one score at the end of the game - and a chance to win. Not saying they win, but he secured a loss with both calls.

And I do understand the special team call maybe wasn't his - but in the end its his responsibility.

If we had our back up QB in and Barkley only gets 10 carries people would be losing their shit.
I listened to McCarthy's postgame interview
No Where Man : 11/26/2020 9:45 pm : link
He said that the information they had gathered told them the fake punt was "a solid call". Just FYI the information was gathered by coach Bones Fassel.
RE: Good news
santacruzom : 11/26/2020 9:57 pm : link
In comment 15057323 Dukie Dimes said:


Not true, several of us did. A buddy of mine gets some inside info from the Pats, and told me before he was even mentioned as a candidate the Giants should consider him, bc he was considered a great head coaching candidate in New England. Several of us were excited about Judge early on

LMAO, this is about the silliest claim of "facts" I have seen on here. Seriously, what do you base this claim on?
The guy has interviewed for one NFL HC job and got it AFTER he was offered the Mississippi State HC job.


No, it wasn't. It was bad, but you leave yourself plenty of time to overcome it if you don't convert.

I actually was semi-impressed by WFT. But was that because the Cowboys were so badly planned or because they played well. Those gaping holes in the dline at the end were rather impressive.


But McCarthy is 1-0 against Judge.


Yep my thoughts exactly insane call and to pass it with dalton. I mean come on you do have zeke. If there’s one thing he can do it’s fall forward.
I've been a Packer fan since the 60's
arniefez : 11/27/2020 9:06 am : link
My father was a hue fan and I met him when they played the Giants in Yankee Stadium. Bart Starr too and bunch of the other players.

When I say fan I mean I like them and root for them when it doesn't effect the Giants. So I watched many many of McCarthy's games. I don't think there is any other coach of the past 20 years that couldn't have won more than 1 Super Bowl with Aaron Rogers. Belichick would have won 10. Jim Fassel would have won 5. I'm hoping Mccarthy has a long run with the Cowboys. Jerry couldn't have made a wiser choice.

If you want a clinic in horrible NFL head coaching go back and watch the Packers Seahawks championship game in 2014 (was played in January 2015 but the 2014 season). It was almost impossible for Green Bay to lose that game.

Of course as a Giant fans we should all be grateful to McCarthy he is as responsible for the the two Eli Super Bowls as anyone in the Giants organization.
Fat phone fingers
arniefez : 11/27/2020 9:07 am : link
my father was huge Lombardi fan...
Getting blasted by Dallas media for the fake punt call
Rick in Dallas : 11/27/2020 10:54 am : link
McCarthy handed that victory to the WFT yesterday.


Rodgers is physically more gifted than TB12 without a doubt. But Tawmy and Bill loved film study and prep as much as game day and Tawmy made a lot of sacrifices that I’m just not sure Rodgers would have even considered. It’s an interesting question, how would the other great QBs have fared in NE during the same years Brady played? But I think guys like Eli, Peyton, Brees, Rivers all seem like better character and work guys than Rodgers. Rodgers is such a head case - I wonder how long a guy like Rodgers could play for a guy like Belichick? Plus, of course, the New England gay club scene is entirely different.
.
Britt in VA : 11/27/2020 11:10 am : link 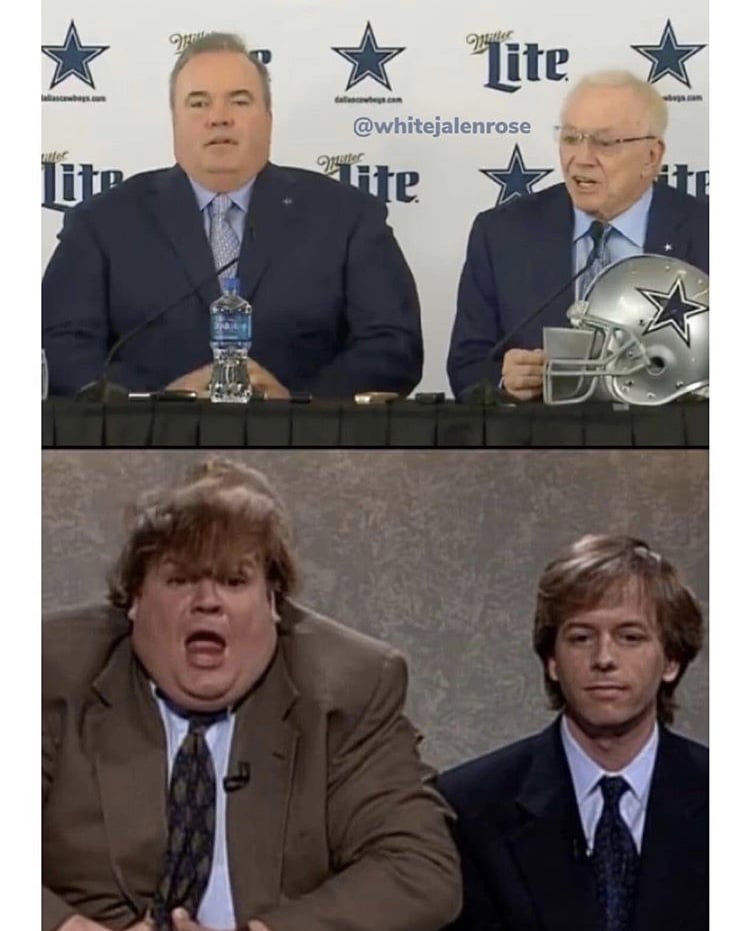 The hypothetical game NFL fans seem to love to make are so ludicrous. “If this guy had this player or if they had this HC they would win X many SBs!!”

I don’t think McCarthy is a good HC but let’s not act like he didn’t play a big role developing Rodgers.
Now we got people taking Rodgers work ethic into question
Zeke's Alibi : 11/27/2020 11:53 am : link
Ridiculous. This narrative around Rodgers is so weird. He’s a guy that reworked his fundamentals coming into the league. You know how hard that is and how much work needs to be put into that at that age? Rodgers has been giving some pretty candid interviews in his weekly spot with McAfee and I got news for you, the guy loves football. You need to see his answer about why football is the greatest sport on Earth. “Every other sport, 1 or 2 players, can bring you a championship, even in soccer an elite forward or GK can get you there. Football is all about all 11 guys doing their jobs on every given play. I love the team aspect of the sport and going to battle with all the other guys in the locker room”.

Rodgers wasn’t the one holding up in his offense getting massages in the middle of practice.
And listening to AJ Hawk and Rodgers talk about McCarthy
Zeke's Alibi : 11/27/2020 11:55 am : link
It’s clear they think he’s a hilarious character, but don’t think all that much about him as a football coach.
Hypothetically...
trueblueinpw : 11/27/2020 12:47 pm : link
Rodgers is one of the most physically talented QB I’ve ever seen. Arm talent, toughness, reading defenses, making plays in big spots and big pressure games, killer instinct, mobility. Dude is the total package and one of the best I’ve seen.

And I didn’t question his work ethic, which I don’t think has ever been rumored or reported to be an issue. What I did question was ARs ability to last two decades in a place like Belichick’s Pats. You know, hypothetically.

There are entirely credible stories of AR ignoring MM play calls. And yeah, maybe those calls were bogus and stupid but still, it makes me wonder how well AR would work with Hoodie over two decades. Like, hypothetically.

Off the field the guy has a pretty weird life. I’m not judging him, I’m really not, but he seems like kind of a head case. I think that’s part of who he is and I wonder how that would have worn in NE? Just hypothetically speaking.

Probably say more about Brady and his willingness to subordinate his ego to Hoodie’s and the Patriot way. Idk. I think it’s clear that AR is more physically talented than TB. But the mental aspect, the emotional maturity? That would seem to heavily favored TB and also heavily handicap AR in a place like NE. Hypothetically.
RE: Hypothetically...
Zeke's Alibi : 11/27/2020 1:16 pm : link
In comment 15057675 trueblueinpw said:


I actually do understand this sentiment, but I think a lot of these have been answered. People have pointed to him being estranged from his family, well his family is a bunch of super weirdo fundamentalist Christians. They've pointed to him being insubordinate to Big Mike, well obviously he should be. Guys is a terrible head coach. They've pointed to some of his press conference answers. After listening to some candid interviews with him he's certainly an extremely smart guy, well thought out, and introspective. He probably gives some answers there that don't sit right with people. In fact this is something that BB would improve, have you seen Cam in interviews lately, talk about towing the company line.

Would he be able to handle getting skewered in team meetings? After listening to him this year in these candid interviews, it's clear he loves the team aspect of the sport and only cares about winning. Brady is the guy that is way more worried about his legacy. The tell all book that just came out on the recent Pats tells you all you need to know "Tommy Foxboro". Who says Bill isn't a funny guy? Jumps ship on a bad Pats team, to go to a very talented Bucs team, with the QB whisperer at coach. Tremendous skill players with an offensive line that can actually pass block, but Jameis would hold the ball so long would make them look much worse than they are.

The fact that people are talking about this season saying well maybe Brady was the one driving the ship there and not Bill is absolutely ludicrous. I live here in Tampa so I see the Bucs all the time, he didn't want his legacy to be so tied to BB, understandably so I probably wouldn't either, but this move was so calculated it's hard for me to give him credit for it. If he cared so much he should have jumped ship earlier to a team that wasn't a perfect landing destination. Even then, hard to see this Bucs team winning a SB with Brady at the helm, just looks like a middle of the road QB out there these days. His stats look pretty good because the offense is tremendous, and the attacking defense doesn't spend much time on the field.
McCarthy and the Packers
yalebowl : 11/27/2020 4:24 pm : link
I live in Wisconsin and McCarthy was a terrible coach here. His press conferences were completely undecipherable. I am so glad the Giants stayed away from him.