Was watching the game with 3 of my friends in one of their basements. We all jumped up and cheered and hugged when McQuarters intercepted Romo clinching the game. Everyone thought we were gonna lose, and the Giants won. Told my friends if the Giants win, I'm going to Green Bay, figuring they didn't have much of a chance. Next daym I'm calling Big Blue Travel and booking a trip. 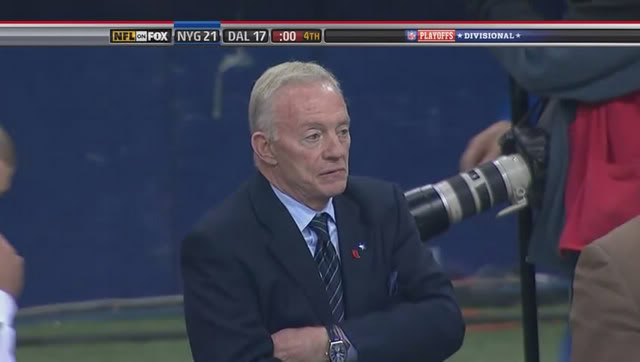 
It's like he knew that was his best shot of witnessing another Dallas Super Bowl.
the key was the TD drive at the end of the first half.
Victor in CT : 1/14/2021 7:58 am : link
Eli calmly and coolly marched down the field. Put them right back in the game.
I loved that game -- just rewatched it
jpkmets : 1/14/2021 10:06 am : link
from Jerrah putting tickets to the title game on every players' chair, to the drive before half, to the TO meltdown and also the first (and best) Hitler Downfall video I've ever seen.
Hitler reacts to Giants d. Cowboys - ( New Window )
Awesome
JaxGiant : 1/14/2021 10:10 am : link
This is easily in my top 3 wins ever. I loathe the Cowboys and especially this particular year. Knocked them out of the playoffs, pissed of Jerry, made TO cry. I mean, what else could you ask for? At the time, I could have cared less if we beat the Pack the next week.

Beating the Packers and Patriots was the gravy to this season.
This game reminds me of the Giants-Bills Super Bowl.
shockeyisthebest8056 : 1/14/2021 10:47 am : link
The Cowboys cut the Giants in half twice during the regular season throwing the ball all over the field. However in the playoff game, the Cowboys ran the ball well and stuck with it. That kept the possessions and the scoring low. It played right into the Giants hands.