Deep-dive research into the record of Ray Flaherty

truebluelarry : 2/16/2021 11:03 am
One of the projects I work on is assisting the gentleman who maintains the Giants all-time roster for the annual media guide. He correlates the bulk of the data (he's been doing this independently since the late 1960s) and when a potential discrepancy appears I'll be recruited for follow-up work.

Last year we made the surprising discovery that Mel Hein's previously assumed perfect playing record actually was incorrect, he missed a game in 1933 (the impetus for that project came from the Pro Football encyclopedia had miscounted his games played by three, so even though we learned he missed a game, his total games played still increased from 170 to 172!). This year the subject was Ray Flaherty, and we sort of fell into it sideways.

This is confirmed by the box score of the game in the NY Daily News. 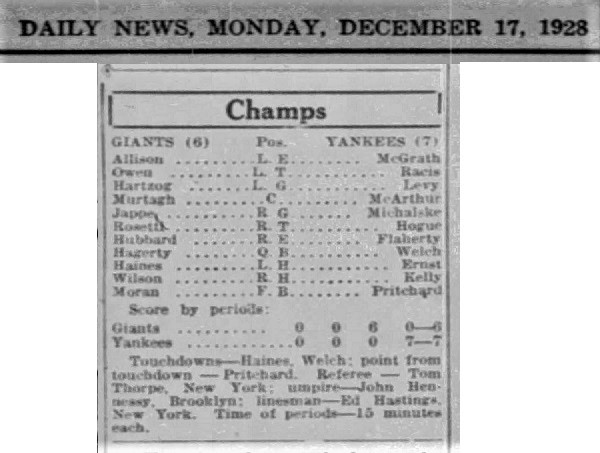 Verification through game summaries & box scores proves to the the critical lesson for what follows.

Don't believe everything to you read in game programs! They're often a good source, but aren't 100% reliable as they are printed days (or even a week) in advance of a game and player status can change on short notice, making corrections impossible.

Knowing Flaherty finished the 1928 season with the Yankees, when did he play for the Giants?

Digging into the program archive I was surprised to find Flaherty listed in two programs:

Several problems immediately jumped out at me. The Flaherty's are being listed with different jersey numbers, different colleges and neither attribute's a fist name.

Long story short - we confirmed the Flaherty of Notre Dame listed in the Pottsville program is Pat Flaherty, and he did indeed play as a substitute for the Giants in that game. 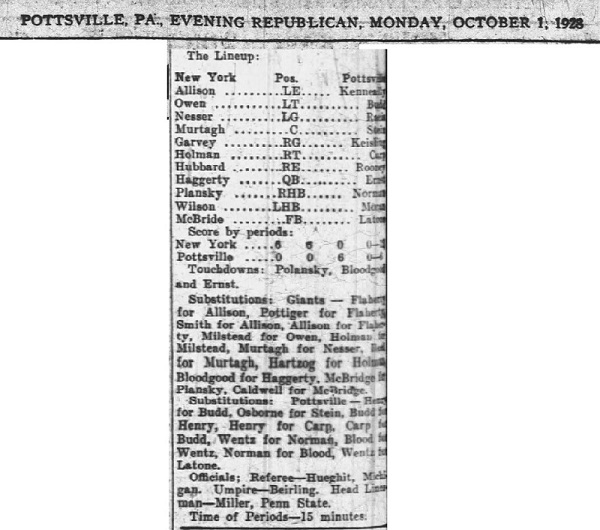 Although the Flaherty in the Green Bay program is listed with Washington as his college, knowing Ray Flaherty played at both Washington State and Gonzaga (in Spokane, WA) we can safely assume this was him.

The next problem was he did not appear in any of the box scores for the game. 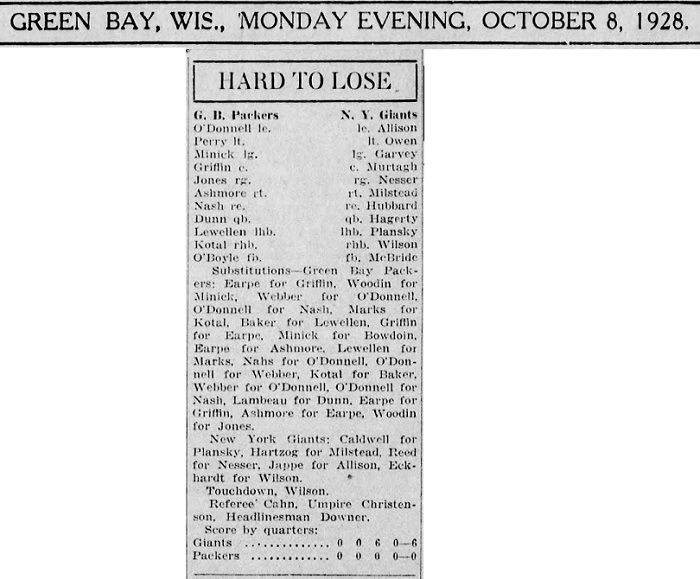 In addition to the box score, the Green Bay Press Gazette printed a meticulous play-by-play account of the entire game, which would discount any possible errors in the box scores. (It's very long, covering two pages.)

What we see though, is that Cal Hubbard played the full 60 minutes at one end position (mentioned in the summary as well) and Paul Jappe subbing for starter Neely Allison at the other end position. While Jappe was a capable player, he was 30 years old in 1928 and past his prime. Knowing that Ray Flaherty was considered a premiere player at the time, one could reasonably expect him to be the first man off the bench were he not starting.

The next logical step seemed to be checking all the NY daily papers (NY Times, NY Herald-Tribune, NY Daily News, Brooklyn Daily Eagle and Brooklyn Times-Union) for transactions regarding Flaherty and his status with either team during the week following the Green Bay game. Unfortunately those came up empty.

I was able to confirm that Flaherty was a full fledged member of the Yankees on the weekend of October 13th as he played both their games on Saturday 10/13 at Frankford and Sunday 10/14 against the Wolverines at Yankee Stadium. 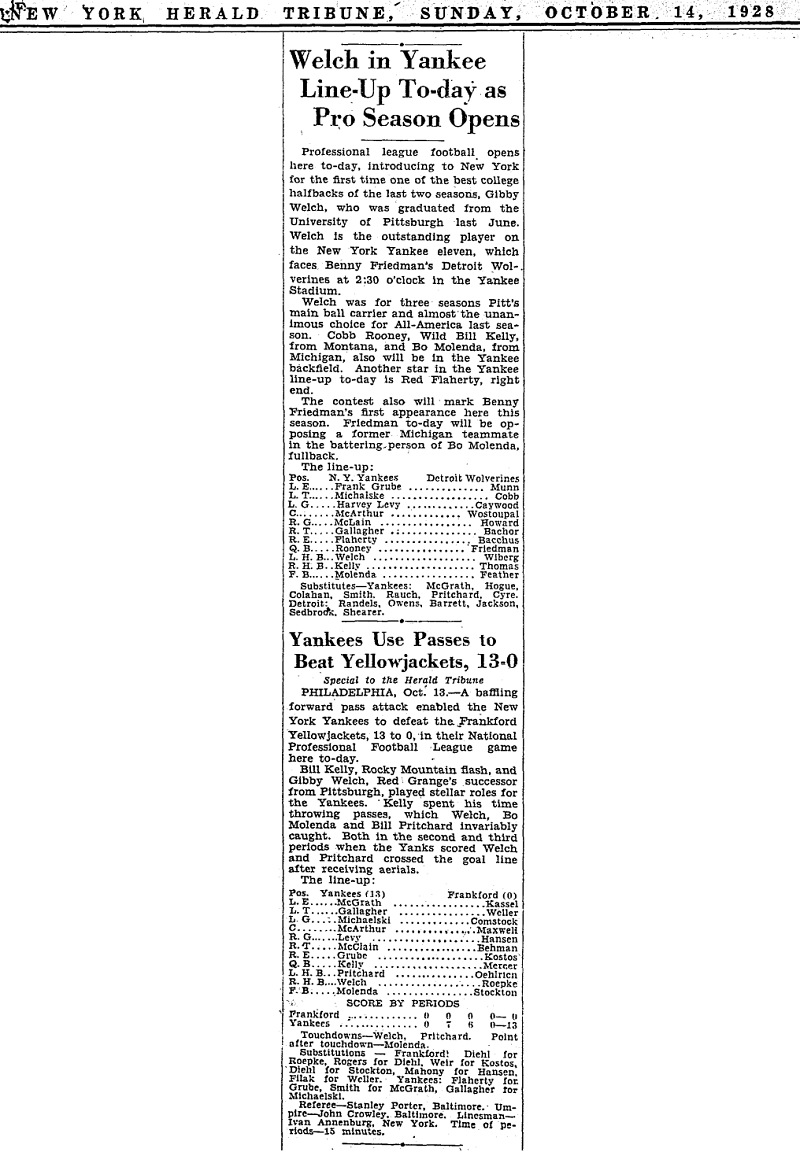 Flaherty ended up catching a TD pass in the game against Detroit, so his participation goes unquestioned.

My next step was going back one week, to see if Flaherty was on the Yankees for their game at Pottsville on 10/7, which coincided with the Giants game at Green Bay.

The Pottsville box score, supplemented by another exhaustive play-by-play account of the entire game, makes no reference to Ray Flaherty. 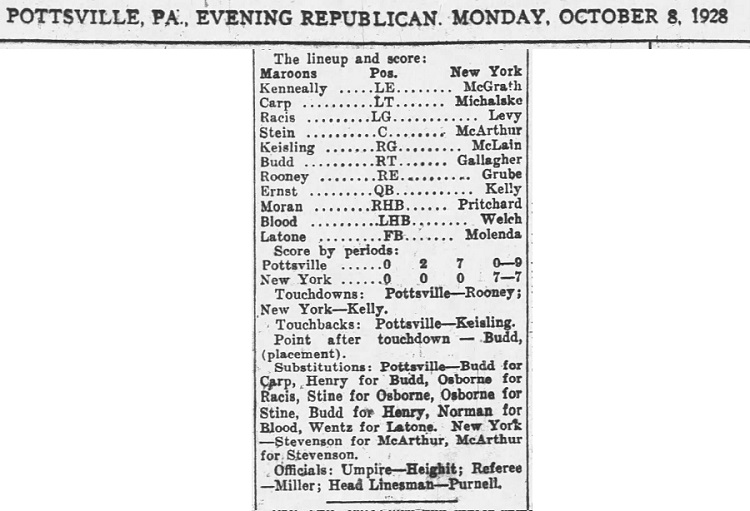 If Flaherty was not on either the Yankees or Giants, where was I to go next?

I did a search for Ray Flaherty in his home state of Washington, and found this notice of his signing with the Yankees dated 10/9. The article mentions he had signed the previous evening and was already en route to the Yankees. This information definitively eliminates the possibility of him being on the Giants roster 10/7 at Green Bay; the game program was in error! 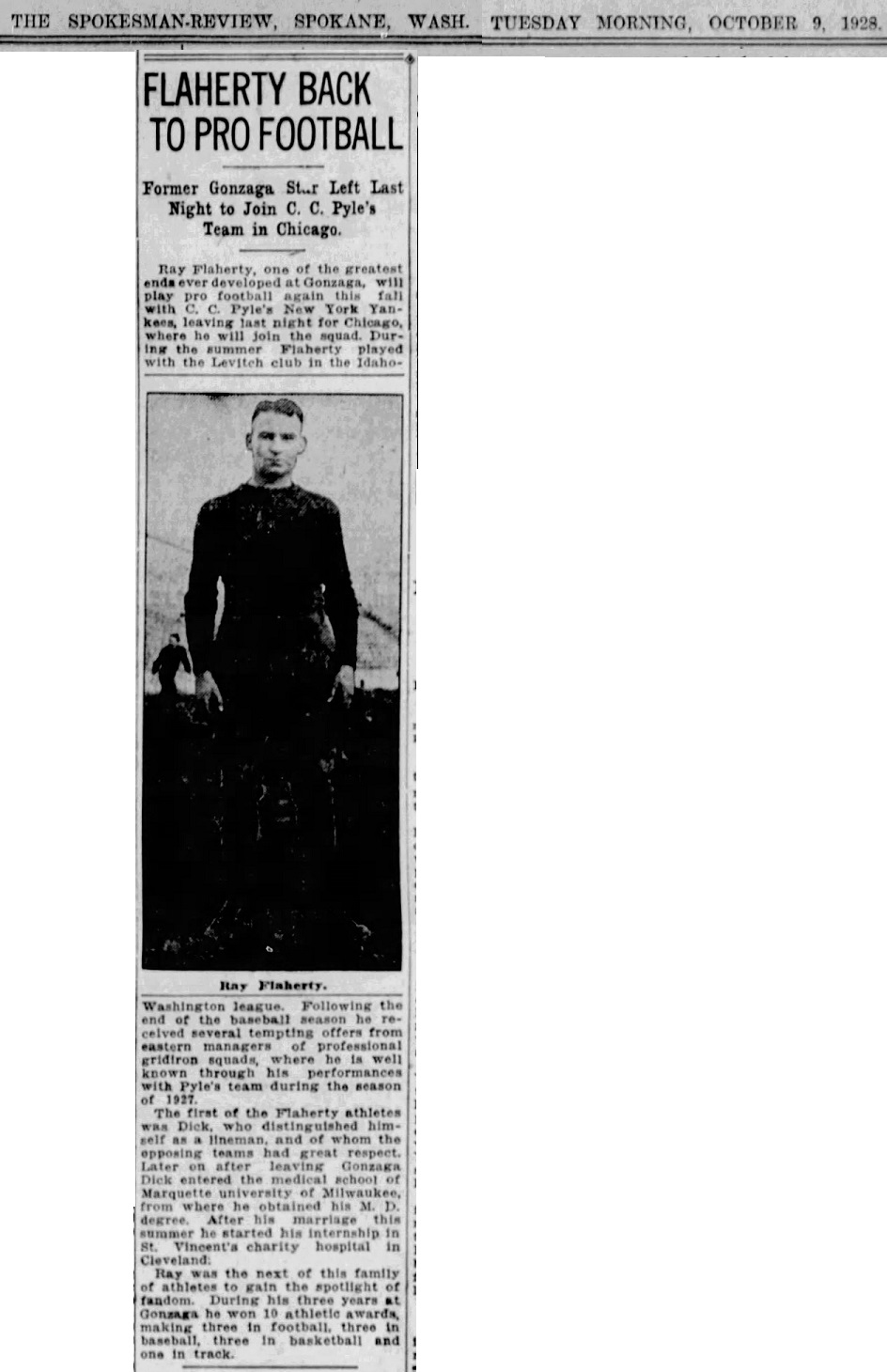 I did a second search of the Spokesman-Review for 1929 and found even more supporting evidence on the date 9/8/29: 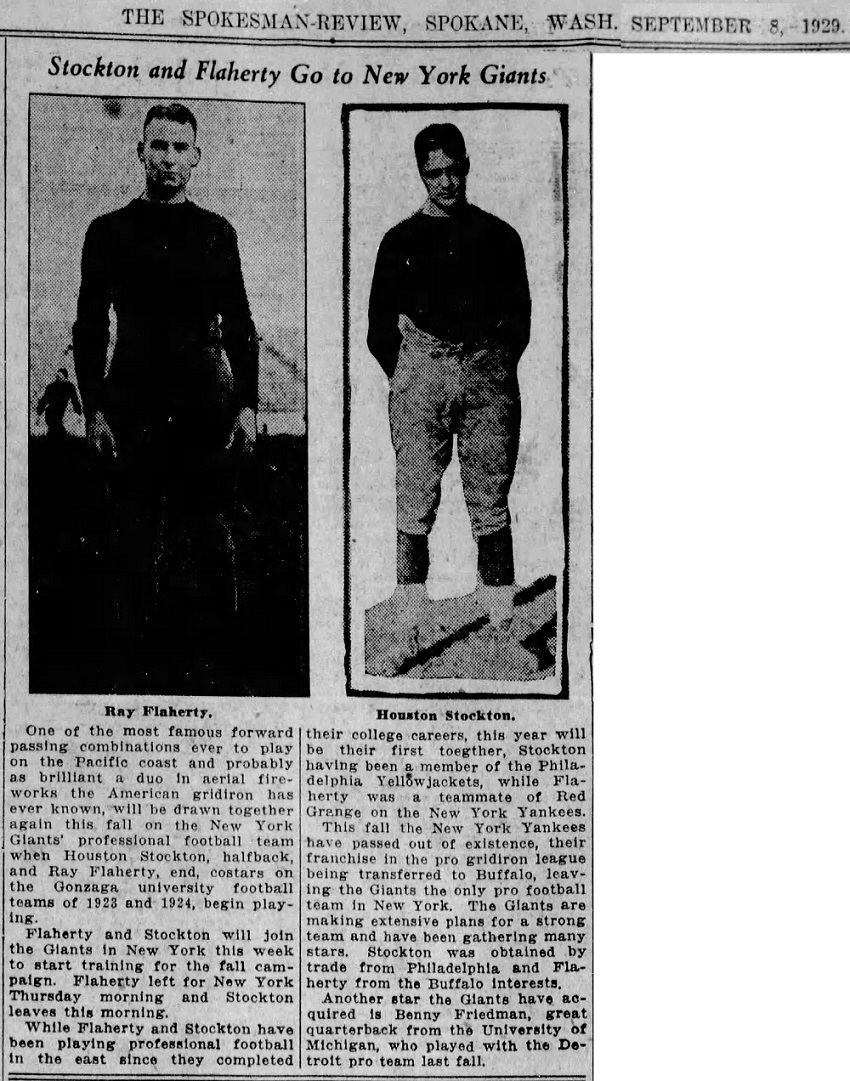 This article mentions that Ray Flaherty had been a member of the Yankees in 1928, and after the franchise's demise had just signed a contract for play for the Giants in 1929 (after engaging in contract talks with the Buffalo Bisons).

Player movement was a common thing in the 1920s and early 1930s and can be confusing to track. Even the best players players only received single year contracts, and many played on a week-to-week basis.

Consider, even after an All-Pro season in 1929 playing for the Giants where he lead the NFL with eight TD receptions, Flaherty opted to coach at his alma mater Gonzaga as he made more money coaching college than playing pro football!

I'll make the ocrrection in my databse.
Thanks for helping me get it right.