Anthony DiComo
@AnthonyDiComo
·
8m
Dellin Betances was focusing on his arm angle/mechanics in today's bullpen session, per Luis Rojas, rather than velocity. 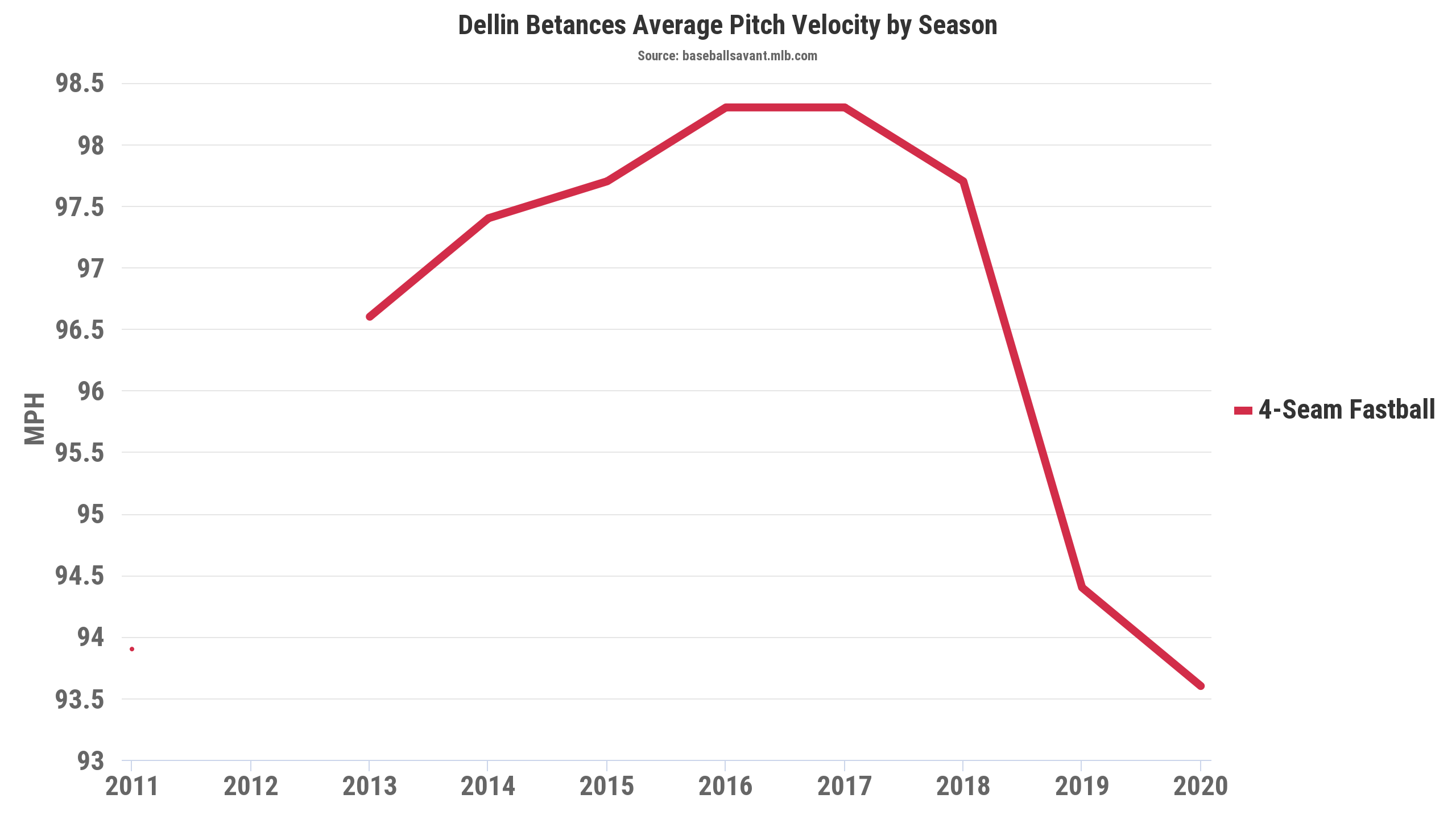 When you’re seen as a sure-fire single-digit pick entering the spring, there’s not much room to move up. While it will take more than four innings against a team better than Air Force to cement that view, Hill certainly impressed in his season debut. He’s a physical beast at 6-foot-4 and 235 pounds, with monstrous stuff highlighted by a fastball that frequently got into the upper 90s, a low 80s power breaking ball and a more refined changeup than had been seen in the past. Between a shoulder issue in 2019 and the pandemic last spring, Hill entered the season with fewer than 25 innings under his belt. Scouts want get past the questions about his command, but if he continues to throw strikes the way he did on Saturday, he will move up on boards despite there being little room to.
DFA'ed by Oakland, Sandy had him there in 2020
DanMetroMan : 2/23/2021 5:32 pm : link 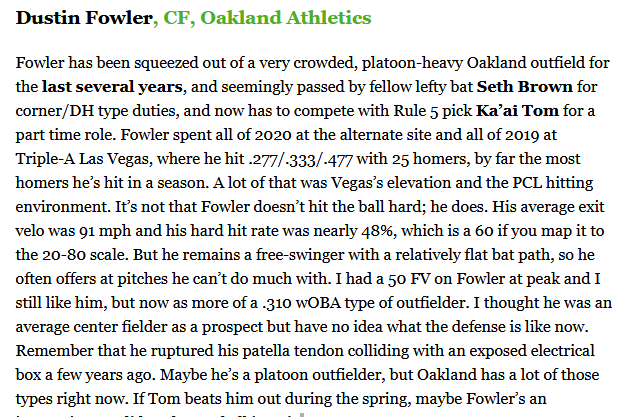 Any players you are particularly interested in that realistically have a good chance of being there when the Mets pick?

Ty Madden is someone I will definitely be following. Obviously, you don't draft in need in MLB, but it would be nice if BPA was a college SP. Mets could definitely use a couple cost-controlled SP in a few years.
Some love the SS from carolina
Shecky : 2/24/2021 9:39 am : link
Need another cup of coffee before I can remember his name

Someone they love will absolutely be available when they pick. It’s a deep enough top. But I wouldn’t be averse to selecting a safe close SP like a Mace, save a ton of $$ and go absolutely wild in second and third round. Remember. This is one of the strangest drafts of all time, and an unusual number will be available later in. Should be quite interesting.

Predication, several teams will think they are smarter than everyone else, and be drafted purely based on Rapsodo, trackman and even youtube pocket radars for pull downs and Max bells LOL
I will say this
Shecky : 2/24/2021 10:31 am : link
This is FAR from the most ‘talented’ group of pitchers in a Mets camp. But you’ve got to go a ways back to find a group of “pitchers” like this group. Hefner is going to love working with this group and more importantly, this is yep he first time in a while they have a collection of very different pitchers. Depending who comes north, in a four game series, it’s going to be real tough for opposing batters to adjust from game to game or inning to inning. Even Loup, he’s just... different. Could be interesting.
Dom
DanMetroMan : 2/24/2021 10:33 am : link
has arrived. So I believe 3 players remaining absent including Cookie.
RE: I don't see Hill being available
DanMetroMan : 2/24/2021 10:37 am : link
In comment 15160260 KDavies said:


Surreal day.
one thing I am curious to see about the Mets
KDavies : 2/24/2021 11:56 am : link
is they have been going position players in the 1st the past 3 years. Wondering if that is the strategy, or it just so happens it is the player they like the most. Past couple years they have followed in the 2nd with SP.

It really was a big part of the Cubs/Astros success going position players and supplemented much of pitching through FA. There seems to be a bit more predictability in outcome, and less injury risk, in position players.
Kazmir
KDavies : 2/24/2021 11:57 am : link
at least with the Kelenic/Diaz trade you could say, well they need a close, and Diaz was great. Any maybe Kelenic busts, even though everyone hated the deal.


The injury risk aspect is key. And why I wouldn't trade all star position players for comparable all star level pitchers at the same age unless that player was absolutely elite. The chances players like McNeil, Conforto, and Alonso are healthy and productive for 1200 ABs over the next several years is dramatically higher than predicting any SP to throw 600 healthy innings.


Funny you mention this, Turk is the most famous baseball alumni from my alma mater. I always liked his idiosyncrasies - kind of fun. Wouldn't step on the foul lines, licorice in between innings and the necklace - among others.


Duquette once subtweeted me joking about the deal


I didn't know really anything about Walker, but based on the recent twitter posts about him, sounds like some refined, cerebral, wine drinker, and reading about Wendell sending him a necklace made of animal teeth just seemed funny to me. I can see Walker opening it and reacting like a parent when your kid gives you the necklace they made in preschool with a string through some pasta.
RE: RE: Walker chose #99
Pete in MD : 2/24/2021 1:48 pm : link
In comment 15160510 pjcas18 said:


I have a child who is there now as a Freshman, not much has changed in that regard (partying) but you wouldn't recognize the school otherwise, it's massive.
Some people
pjcas18 : 2/24/2021 2:19 pm : link
on here were saying how great Alonso was last year, seems like the hitting coach disagrees.

Either way, even if you think Alonso was fine in 2020, looking forward to the bounce back.

44 homeruns (2nd best single season in franchise history behind his rookie year)
100 rbis (2nd time any NYM hitter has accomplished that in a decade, the other being his rookie year)

Also cool video at link below of the top prospects in ST. Allan's build and motion look a little like JDG.
The top prospects in the Mets' system have come into spring training with a bang. 🎸 - ( New Window )
btw just for reference last year Dom's 162 pace was 136 RBIs
Eric on Li : 2/24/2021 2:48 pm : link
not to take anything at all away from him but that would have broken the franchise record by 12 (currently Piazza, Wright both tied with 124).

He'd have also posted the 4th best OPS in team history behind Piazza (2x) and Olerud ('98).

Dom + Alonso have had back to back historical offensive seasons and in no world should those bars be considered their base level of performance. Even if they are both HOF'ers they are not going to outdo all but the best seasons from guys who also posted legitimate MVP seasons like Piazza and Wright every single year. that's just insanely unrealistic.
Matt
DanMetroMan : 2/24/2021 2:52 pm : link
Allan is already significantly thicker than JDG. Closer to Harvey prior to Harvey putting on some bad weight. Allan probably outweighs JDG by 30 pounds
Endy
DanMetroMan : 2/24/2021 2:54 pm : link
Rodriguez the kid they gave up for Lucchesi got a very positive report from FG's and they ranked him the Pirates #20 prospect (in a very good system).
Dom
KDavies : 2/24/2021 2:56 pm : link
was their best hitter last year IMO. I had more faith in him than anyone else at the plate, including Conforto.


He looked like he was in pretty good shape in his interviews today. I really hope he can get his defense playable. That would be a pretty amazing development for the organization.
I'm not a baseball expert like some of you guys
Dr. D : 2/25/2021 8:50 am : link
I'm hoping that with JD concentrating on 3rd base and not working in OF, his D at 3rd will improve a little, but I'm wondering what the potential is for the presence of Lindor at SS making JD appear statistically to be a better 3rd baseman.

Yeah, that's what I meant. If Lindor's range could result in a reduction of fielding opportunities for JD and possibly allow JD to cover the 3rd baseline better (being less concerned about his left side) .. 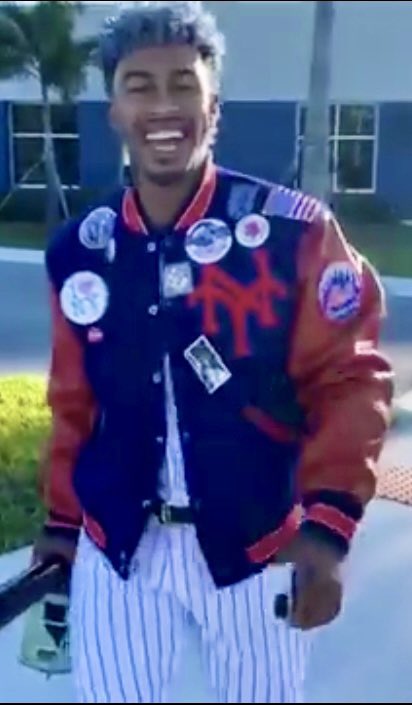 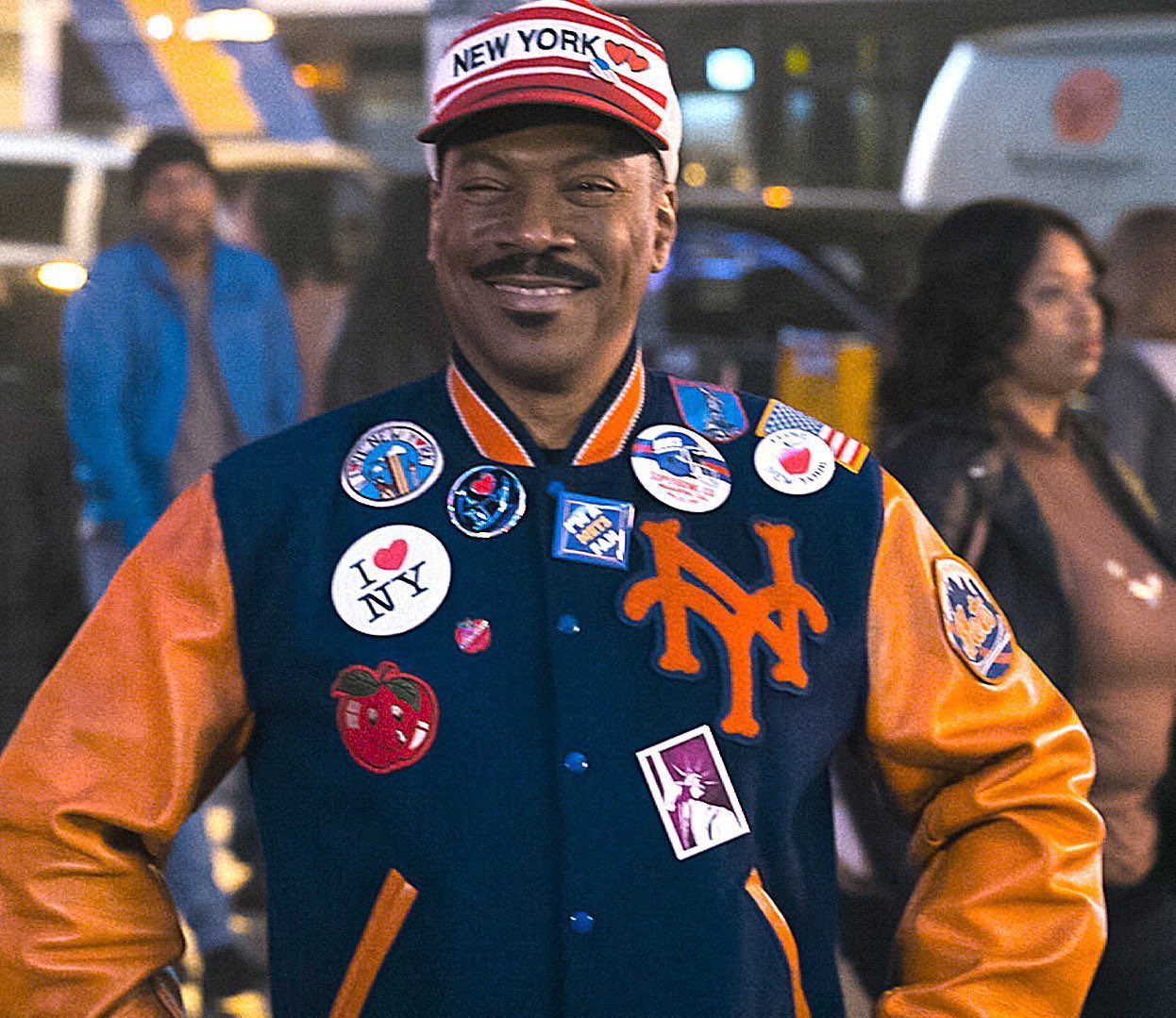 
They have somehow sort of threaded the needle between doing exactly what all of us hoped they'd do, but in a way that hasn't created sky high hype/expectations. Pretty impressive.
Pages: 1 2 3 4 5 <<Prev | Show All |