Matt G : 3/28/2021 7:18 pm
We will use this as a discussion thread to keep the picks thread uncluttered. These threads will be used for the duration of the draft.

Once a team is on the clock, they will have two hours to make a selection. If a team goes on the clock after 4pm, their two-hour window will roll over to the next day. For example, if you go on the clock at 4:30pm, you will have until 9:30 am to make a selection. Picks may be made between 6pm and 9am if GMs are online and following the draft thread. The time limit only applies during the 9am to 6pm timeframe. If the two-hour time limit expires, I will make a pick using any list that the GM for the team has sent me in advance (send lists to the email address in my profile) or in the absence of a list, I will use the GBN Big Board with a little discretion so as not make an obvious dumb pick (i.e. Kansas City won’t be taking a QB in the 1st round this year). If a GM misses two consecutive picks without providing a prospect list or making some form of contact with me (email or posting on the draft thread) the spot will be reassigned to one of the BBIers who have expressed an interest to fill the vacancy.

Cheers
Thank you to everyone who helped make this another fun mock draft
MadPlaid : 4/13/2021 1:03 pm : link
Especially, Matt G, for all his efforts in making this possible. You are the best. Truly.

Thank you to Mike in NY and Big Blue Blogger for all the fun banter and feedback. You and Matt are a big reason I look forward to this every year.

Stay well, fellas. Until next year. 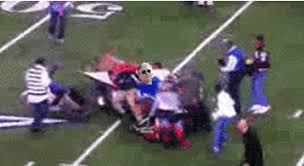 Baltimore UDFA's are done
Mike in NY : 4/13/2021 1:16 pm : link
JONATHAN MARSHALL, DT, ARKANSAS
I was worried about Marshall falling when he appeared on Sy's list. Despite only being a one year starter he was a team captain. Hardworking player who I think offers a lot of versatility in a 3-4 scheme. Reminds me of a poor man's Dalvin Tomlinson. Lack of track record and shorter than ideal arms if forced into 5T drops him to the 6th Round. Ravens need depth on the DL as their starters are getting old so happy to address it in the Mock Draft

SADARIUS HUTCHERSON, OG, SOUTH CAROLINA
Too much of a value to pass up at this point. Has experience at both OT and OG, but his ultimate position will be inside in the NFL. Power and run blocking fits Ravens offense. Reminds me of Shane Lemieux, but with more athleticism (1.75 10, 5.01 40, 31 1/2" VJ). Starting in the SEC means he has played against top level competition in college

TAY GOWAN, CB, UCF
Jumped on my radar last year when scouting Simi Fehoko and Davis Mills. Opted out of 2020 season or would have ranked higher. Offers solid size along with some really nice measurables. A bit of a gamble here, but there is definitely talent to work with

JAKE FUNK, RB, MARYLAND
I thought for sure I would be able to get Kene Nwangwu as a UDFA, but alas it was not meant to be. Looking at who was available, Funk seemed like the most comparable option. Showed outstanding athleticism at his Pro Day which was important considering injury history. Local kid whose experience on Special Teams worked in his favor

ZAIRE MITCHELL, TE, NOTRE DAME (OH)
This is a long story. Our new scout for the upper Midwest typed in Notre Dame into his Uber app then fell asleep. Came back raving about this big TE. Was poo pooed since we knew Tommy Tremble was a mid round pick. Provided some homemade video and we were in awe. Absolute man against boys and, unlike many at that level who are physically dominant, showed a lot of willingness as a blocker. Total wildcard, but figured it was worth the gamble
Here's my complete haul for Miami:
Optimus-NY : 4/13/2021 1:20 pm : link
ROUND 1 (6): Ja'Marr Chase, WR, LSU
ROUND 1 (18): Kwity Paye, EDGE, Michigan
ROUND 2 (36): Najee Harris, RB, Alabama
ROUND 2 (50): Landon Dickerson, IOL/C, Alabama
ROUND 3 (81): Rashad Weaver, EDGE, Pittsburgh
ROUND 5 (156): Richard LeCounte III, S, Georgia

Some solid players were still out there, you guys are on it.


There are still a couple that were on my priority UDFA list that remain unselected for those who haven't yet selected, but it was fun. Not to mention that there was far less overlap than in past years despite everyone posting within the same 90 second window.
Atlanta Draft
NoGainDayne : 4/13/2021 3:00 pm : link
Kyle Pitts, TE, Florida, Round: 1, Pick No: 4, PFF Rank: 5, Sy Grade: NA, Sy Rank: NA

Atlanta is very happy with the draft this year. Was surprised how Melifonwu was ranked in a lot of places and at various times was super happy that Sy posted the rankings shortly after my pick. Pitts was the obvious value to me and it looks more and more like maybe he will go there in the real draft. After that Atlanta really needed help in the secondary and Moehrig, Melifonwu and Deablo are all players built for the modern NFL you need guys with size and speed that can allow you to use them in different ways to disguise coverages. Which was similar thinking behind Pitts.

Mond and Powell I think presented great value where I got them and Mond at the very least could be useful right out of the gate in Taysom Hill "type" packages where you make the defense prepare for more especially in the red zone and short yardage. Powell played behind some talented receivers at Clemson but took a big step forward this year and could develop into a steal if someone grabs him later in the draft.

Jordan and Elerson smith are two guys with NFL frames and some production to match where you could see them developing into valuable pass rushers under the right training and coaching programs. Brown and Deablo are two guys I considered taking instead of Mond, Brown flashed some real potential and I think he goes a round or two higher in the real draft.
RE: Here's my complete haul for Miami:
Trainmaster : 4/13/2021 4:34 pm : link
Wow. Some big names in the first few picks. I doubt Miami really does as well as you did.

Thank you
UDFA Rumor: GB Update
ChicagoGiant : 4/14/2021 12:50 am : link
We are still having conversations with Quntin Morris, TE, Bowling Green

Correct
Matt/Mike: Fantastic job. Thank you for all your work.
Big Blue Blogger : 4/14/2021 8:01 am : link
Sorry about my confusing UDFA list, and the resulting mixup on T.J. Slaton.

One minor note on the spreadsheet: Tony Poljan started at Central Michigan, but finished at Virginia. So in the NFL’s eyes, I think he’s a Cavalier, not a Chippewa.

I learned a lot about the 2021 draft class through this process. One key takeaway is that a deep class at prime positions like CB or WR or OT doesn't mean you can wait longer to take one. It just means they are likely to go faster. By the middle of the second round, it was hard to find a near-term starter at any of those positions who doesn’t have significant warts; and the value at Edge was never particularly enticing either. Of course, QB is stripped fastest of all. The Chargers are happy to be out of that race for a while.
RE: RE: RE: Hi Matt
MadPlaid : 4/14/2021 8:20 am : link
In comment 15219899 Matt G said:

Jhamon Ausbon, WR, Texas A&M
Royce Newman, OT, Mississippi
Chris Garrett, EDGE, Concordia-St. Paul
Pooka Williams, RB, Kansas
I wish I had the time
johnnyb : 4/14/2021 12:05 pm : link
to put together an UDFA list, but that would involve crosschecking each pick in the 6th round and every team's UDFA picks. I just simply do not have the time to do this.