What were they doing with the headset if they aren't allowed to review that?

Also, good on the Mets booth for calling out the crap and not just accepting the win.
When Dietrich was on the Marlins
Mike in NY : 4/8/2021 4:43 pm : link
He did that s**t all the time
I think the head set
pjcas18 : 4/8/2021 5:16 pm : link
was to review if the pitch hit him, sounds like from Ron that's all that is reviewable (if it hit him) the judgment was call is if he tried to get out of the way or leaned into it and is not reviewable.


Yes, from my understanding the determination of whether he leaned in can't be made after the fact on replay and can only be called on the field.
The good news
pjcas18 : 4/8/2021 5:28 pm : link
for Conforto is he's been struggling but he has another HPB coming his way, lol
"Cheap"
DanMetroMan : 4/8/2021 5:32 pm : link
win but that call can only come from the ump. Maybe the rule should be changed but "intent" is tough to prove. McNeil has been hitting rockets "all-season", Rojas/Sandy/whomever need to stop being so cutesy.
.
pjcas18 : 4/8/2021 5:33 pm : link 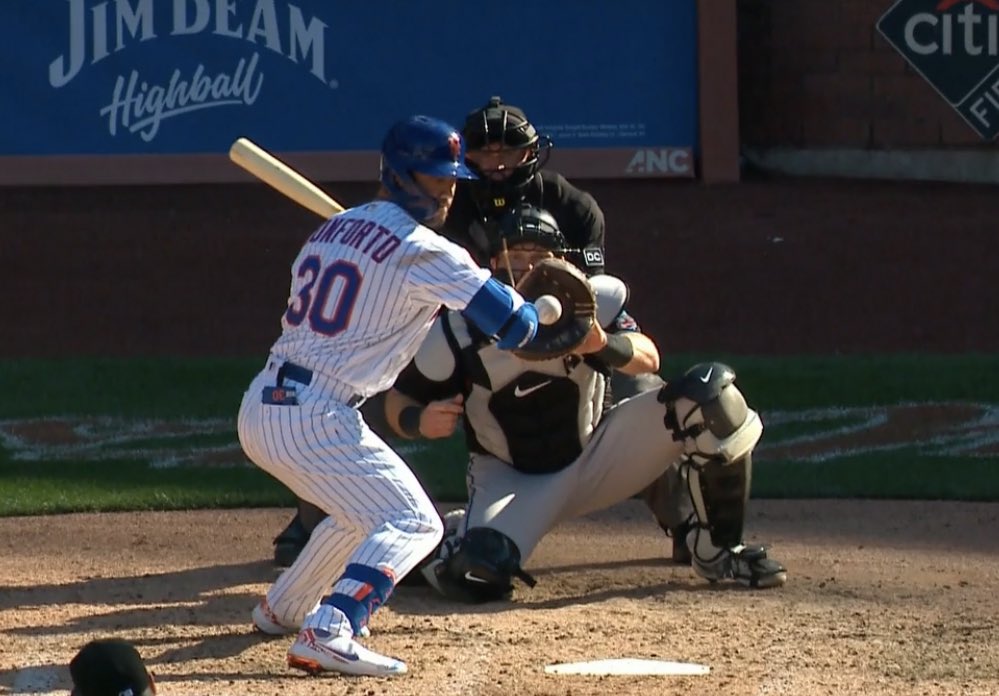 
I like the Top 5 as it was today. McNeil should definitely be batting 6th as long as Davis is out. When Davis gets back it is a little tougher because, as long as there is not nobody out, it prevents from a team bringing in a strong lefty reliever versus Smith and McNeil. If you look at the top lefty relievers, McNeil does not have good numbers and Smith has not faced many.
Jeff
DanMetroMan : 4/8/2021 5:58 pm : link
McNeil should NEVER be hitting behind Jonathan Villar. That's called being too cutesy. It's idiotic. Given Conforto's struggles, an early-season swap of the 2 of them (temporarily) would make a lot of sense. I don't know what the obsession with Villar is. He's a solid bench piece, Jeff McNeil is one of the best pure hitters in baseball
Jeff
DanMetroMan : 4/8/2021 5:59 pm : link
McNeil 252 big league games... 137 OPS+, .316/.381/.497. Villar over him is very, very silly.
Philip Evans
pjcas18 : 4/8/2021 6:03 pm : link
decent start to the season with the Pirates.

That should be the top 6 right now just about every day. When Nimmo Sits you can either move everyone up a spot or just have McNeil leapfrog to leadoff.

Get the best players the most at bats in the best situations possible.
Conforto
DanMetroMan : 4/8/2021 6:18 pm : link
start aside I have zero doubt in the 6 players you named. That's an excellent core. We'll see about JDD and McCann, and even Guillorme. Don't over think this, the bench players are better than they have been but they aren't starters for a reason. Mix and match when necessary but you want your big guns in there almost every day.
yeah I mean we have had a lot of mismatched lineups before
Eric on Li : 4/8/2021 6:32 pm : link
that were lacking prototypical players forcing people to hit cleanup or whatever who had no business doing so, praying for a Duda breakout that never happened. Or hoping Rosario would hit well enough to move to the top of the order. This isn't that.

Nimmo is one of the players in baseball getting on base. That's exactly what you want leadoff.

Lindor is one of the best players in baseball who can do everything. That's exactly what you want in a 2 hitter.

McNeil is one of the best pure hitters in baseball and literally nobody has a better BA than him over career. That's exactly what you want in a 3 hitter.

Alonso is perhaps the best power hitter in the sport and you want him up with men on.

Both Smith and Conforto are sufficiently dangerous to protect him.

So sick of fans who think it's their job to tell other fans what to do.

No one is panicking, but yes people can criticize decisions and be pissed at losses.

No one is send Conforto to the minors or cutting him, but yes people can criticize his slow start.
I love Conforto but he isn't the 2nd best hitter on the team
Eric on Li : 4/8/2021 7:48 pm : link
he's a distant 3rd behind Lindor/Alonso at best and push come to shove I don't even think he's 3rd (I'd take McNeil).

He's been better overall and better with each individual component input. Conforto homers a little more frequently but that's it.
RE: I love Conforto but he isn't the 2nd best hitter on the team
pjcas18 : 4/8/2021 8:01 pm : link
In comment 15214280 Eric on Li said:


Nimmo not far behind either (I think he's ahead of Conforto in some stats like OBP, behind in SLG, probably close in OPS, maybe ahead in wRC+). Mets have a solid lineup.
Nobody's said it yet
allstarjim : 4/8/2021 10:45 pm : link
But how about that bat flip by McNeil.


I think the bat flips are mostly ignored nowadays. The lines of the unwritten rules are a little blurred in modern baseball.

It was a 9th inning game tying homer to a guy that had yet to get his first hit. I seriously doubt he'll be thrown at.


The only thing that really matters is that the ball was clearly a strike. On that alone, he should've been called out.

Home plat umpire Kulpa has already admitted his mistake, but that the only reviewable aspect of the play was if the ball indeed hit him. It did hit his forearm guard, I have zero doubt, the ball ever so slightly changed trajectory.
RE: .
Gmanfandan : 4/9/2021 12:07 am : link
In comment 15214142 DanMetroMan said:


Yeah and I probably overreacted there..

I'm surprised that so many are down on Conforto overall though..

I'd put money on him having higher WAR for rest of his career than any offenses player on the Mets besides Lindor. I think the shoulder sapped him for 2 years and he is the 6 WAR guy he was before the injury and in 2020... But stats don't back me up for his career so I see why people say he is behind Alonso and Jeff...

Nevertheless, it's a good problem to have when you are debating whether your superstar RF is the 2nd through 5th best hitter on the team... That's pretty unreal
only thing more embarrassing
MookGiants : 4/9/2021 1:25 am : link
than what Conforto did on the field was his press conference afterwards.

That's a 1st ballot hall of fame in the bush league for Conforto today, and then he says "From my point of view, "I turned, there may have been a little lift in my elbow, out of habit/out of reaction"


Yeah its complete crap... he definitely deserved to get hit and I hope a coach pulls him aside and tells him to cut it out. Like I said, thats reserved for scum like Utley, who we now know was not well respected at all around the league by the players or coaches.
Here's something I dont get...
Gmanfandan : 4/9/2021 8:31 am : link
First - YES Conforto seemed to purposely get hit and yes I think he should have not been awarded first as a hit batsman - However - the only way he is awarded first by rule is that it is a ball NOT in the strike zone - which would have made it ball 4 anyhow. And the run scores. Again - I completely agree that Michael tried to take a dive but walking in the run vs being hit is still a run.

There is no part of the rule that states he took a dive at a ball outside the strike zone and he's out for interference or its now called a strike.

You can argue whether it should have been a strike or not (it should have) but results are the same if its not.
You do see
Pete in MD : 4/9/2021 8:54 am : link
batters just stand there and get hit but that’s often because the ball is coming at them so fast. They are always awarded the base. I have never seen the ump question if they tried to avoid getting hit. This situation was a little different but usually the batter gets the benefit of the doubt.
RE: only thing more embarrassing
schabadoo : 4/9/2021 11:48 am : link
In comment 15214462 MookGiants said:


Oh dear. People do recover from such things.


He's put on some muscle mass - even my girlfriend commented on it lol. With his pre-existing bat-to-ball skills some more strength could be huge.
Also super early but so far McCann's framing is 68th percentile
Eric on Li : 4/9/2021 12:09 pm : link
and even though all of this is SSS that supposedly becomes a credible statistic quicker than others because of how frequent the events are (called pitches caught per game).

Realmuto is 94th so to your point DMM that's probably going to be "the one that got away" from this offseason when things are all said and done just because of how fair his contract ended up. But I kind of buy the whole "didn't want to go to NY" thing with him since he said he wanted to wait. Maybe he would have come here if there was no other choice but more likely they'd have gotten leveraged like Bauer/LAD and Philly would have just upped their offer with another year if need be. And McCann may have been gone.
The outrage over the Conforto HBP is really overblown, IMO
CooperDash : 4/9/2021 12:20 pm : link
Do I like it? Not at all. But, really, who cares. When Dietrich (sp?) was on the Marlins, he did this EVERY game. We even lost one the very same way. So, their faux outrage can take a hike.

The pitch was not "down the heart of the plate." It barely caught the plate and one could argue that the ball only caught the edge of the plate because of hitting Conforto's elbow. In real time, you can barely tell he moved his arm (obviously slo-mo enhances everything). I'm really surprised at the outrage in the NY media. They say NOTHING when other teams do this to us but now this is national news? Come on.

Feel however you want, I get it. I just don't see it. If the umpires are NEVER going to reinforce the rules, then this is what you get. To me, that was a bit of Karma due to the Marlins.
No
DanMetroMan : 4/9/2021 12:23 pm : link
clue if he were willing to come here or not but the deal ended up being a "no-brainer" price for the caliber of player he is. I will say this, I do think Sandy easily gives Realmuto that (and more) had that been an option. Love me some Lindor but he's not worth 3 times the cash outlay than Realmuto. That speaks to Realmuto's contract vs. any knock-on Lindor. I was pretty adamant I didn't want to givee Realmuto 7-8 years but a 5 year deal? His AAV would have to have been absurd for me to pan such a move. All of that being said, we don't know if he were willing to come or what "option 3" was behind the plate if they whiffed on both he and McCann.
My
DanMetroMan : 4/9/2021 12:25 pm : link
guy Omar Narvaez is hitting .444/.500/.778, Musgrove 6 innings 3 hits 8 k's his first start, pretty clearly I should be GM lol
Realmuto
CooperDash : 4/9/2021 12:28 pm : link
But everything is relative, right. Philly got that deal for Realmuto in large part because the Mets were out. Realmuto definitely could have/should have gotten a better contract if there was a larger market for him. But I guess that's with everyone lol.
Rosenthal TOS
ZGiants98 : 4/9/2021 3:04 pm : link
Paxton TJ, Springer a variety of leg issues, Bauer possibly caught doctoring balls...


Not only that but his insane increase in spin rate last year just screams unnatural development.
Pages: 1 2 3 <<Prev | Show All |