Right, which is why we now have a stacked secondary and made a point to sign Adoree, Golladay and Kyle Rudolph while letting go of two of our largest humans in Davlin and Zeitler.


While I disagree with vehemently disagree with Terps -- you can't can't even sniff his jock
Gettleman
BigBlueCane : 4/16/2021 12:37 pm : link
could be a very bad GM warranted getting fired/replaced yet still have done a good job since Judge was hired and meshed with him.

Also the idea of run the ball, stop the run, etc... wouldn't look nearly as outdated as it does now IF the Titans had held on and beaten KC in the playoffs. Just b/c one team fails at executing the model doesn't mean the model is itself unwinnable.
DG
Thegratefulhead : 4/16/2021 12:59 pm : link
I am a big DG critic but from my point of view he fucking killed this offseason so far. Before everyone else realized what the ramifications of the new TV deals would mean to the future cap, we signed perfect schematics fits at key positions of need for what I think are going to be good contracts.

If you want take that credit and give it to Judge, fucking fine, but then you have to blame Shurmur for his 2 years. Either DG gets the coaches the players they want or he shoves his vision down their throats, can't have it both ways. I don't think he suddenly changed the way he works for a 1st time HC. If you want to go down the conspiracy theory laden, speculative road that the Giants secretly demoted DG, just go away.

Now, the offseason isn't done. I am eager for the draft. The offseason has set us up for what should be a good draft. If DG hits that, my personal belief is that Daniel Jones will have a better year than his rookie year by a decent margin. Even though I am not sold on Jones I am open to the possibility that he can be the guy. If Jones turns out to be the guy, the narrative on DG has to change some. It will for me.

Really, it changes the whole thing. I can play QB, if they add a Waddle/Smith to the offense as constructed, it is going to be a lot easier to make decisions because Golloday is always open if you have the guts to make that throw. We know with certainty that Jones has the guts. His receivers at Duke didn't get open, it is all he really knows. Waddle and Smith get so open, I could make the throw at 52. Rudolph has a giant catch radius, can block and drops less than a pass a year. Read that again. Perfect security blanket. Now add the threat of Barkley. Really, people should drop the Jones bashing, he is set up to break out this year.

Even if they don't add one of the receivers, OL would obviously help too. If they go D fine. Shepard is a decent 3rd option and Slayton/Ross will have to be honored deep.

If Jones doesn't come through with all that, no more excuses, move on. The talk is that Aaron Rodgers is out of Green Bay next year. Those weapons might look good to him. Stack the offense like Tampa did for Brady, let him pick the GM if he wants. Kidding...no I am not.


This is the second time you've approached me about a wager. The first time a couple months ago I responded and you either didn't see or ignored it.

So what are you saying? That the Giants are going to win the Super Bowl? Even you aren't that much of a homer.

My terms would be the same as the first time you asked (though I don't know what we're wagering on): if I'm wrong I'll leave BBI for good and won't come back under a dupe. No more horrible bitching from Go Terps. If I'm right, you as a moderator organize a petition for BBIers to sign and send to Mara asking him to remove his family members from all football operations, and end the culture of nepotism and cronyism that dominates the front office.


if i had a dollar every time everyone thought team A and its GM were trash, only to see that same team get the last laugh, i'd have a few dollars. Which ain't much, but if you invest those dollars wisely, in bitcoin, 15 years ago, RICH BITCH!
everything happens this year
djm : 4/16/2021 2:36 pm : link
either you all get your pound of flesh and the big bad wolf is shown the door, or the Giants start winning and have a young in its prime team capable of making a run for the next few years.

I know what I am rooting for. I also know what I think will happen.
lastly
djm : 4/16/2021 2:37 pm : link
the article completely ignores that the Giants might very well possess the best secondary in football.


Actually the original plan was more about 1935... 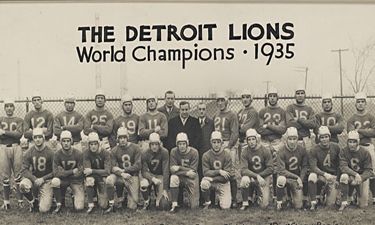 
You haven't made a football point in months from what I have seen. Ranting and bitching from thread to thread, just like you did to in the Mock Draft thread the poster KSIXI put together yesterday which was very good.


Look -- Let's try this -- This is what I think a bet looks like between two men.


I'll bet the Giants go 9 wins this year and then have 10 wins or above next year. That by next season if not this season they'll make it into the playoffs, and if it's next season that they go past the first round in the playoffs. I'll put $250 bucks on the line - and I will also start a thread that says Go Terps won and he was right. If you want to do it once this year and once next year or over two years. I can go either way. You want more money on the line. I'll put in more -- same amount each year? Or you can push up the anti and I'll evaluate.


So if I'm reading this right:


OK it's on
Cut the Bet Bullshit
Samiam : 4/16/2021 3:43 pm : link
We’re all Giants fans here and no one should be betting that the team should lose. I can never bet against the Giants and you can count me in the Gettleman is a bad GM. I would love to be proven wrong.
.
Go Terps : 4/16/2021 4:33 pm : link
I'm not big on betting on message boards either, but I don't understand the inability to separate what you want as a fan vs. what you see in reality. They are easy to compartmentalize.


No, that's not what I see -- I think you have - and I don't question your passion -- but you have written a self fulfilling script that's just not in touch with reality any longer -- you are so far into this loop that you cannot see the forest for the trees -- and it is relentlessly negative
RE: Cut the Bet Bullshit
Jimmy Googs : 4/16/2021 5:10 pm : link
In comment 15223307 Samiam said:


My grandfather told me to never bet against the Giants or Notre Dame. And I never have.

Nobody thinks you’re a bad fan for being critical of the team or expecting more from the team or whatever it is that you truly want from the team...
... criticism of your criticism only becomes a thing when you become unrelenting, hammering the same points on thread after thread.
There are a number of posters who do the same thing and everyone knows exactly where they stand. The issue is not with where they stand it’s with the intensity that they continue to make sure that their opinion is in front of every conversation.
It really becomes a conversation less about the quarterback or the general manager or the team and more about the aggressively negative fan.

So - you can drop the act of “how many games did then win last year? Huh? How many?”


I don't understand what you are trying to say, though I get you are trying to insult me. Taking a dispute over a football opinion to the level of schoolyard insults is bizarre behavior for a mod. But I do appreciate your cooking posts.
Producer
ryanmkeane : 4/16/2021 9:19 pm : link
stop the holier than thou act. Cmon man.
RE: Producer
Producer : 4/16/2021 9:23 pm : link
In comment 15223617 ryanmkeane said:

I mean the jury is still out on 2019/2020 so wont go there but 2017 draft was awful, Taco Charlton and Awuzie were both busts. neither on the team anymore. Jourdan Lewis was replaced by Trevon Diggs (2020)

2018 Leighton Vander Esch had a super down year last year and Connor Williams drafted as a tackle was moved to center then tore his ACL. Gallup did nothing last year and they already drafted his replacement with Lamb (2020).

2019 Trysten Hill will start in 2021 but he rarely did anything of note in 2020, Tony Pollard was probably their best pick and they already have Zeke.


its because the shitty fans compare the Giants to the best version of all the other teams around the league which is unbalance and unrealistic.

So the above is your idea of trying to have a nuanced conversation?


Who would you rather have at the plate with the bases loaded? A .325 hitter or a .125 hitter? It's not guaranteed that the .325 guy is going to get a hit or that the .125 guy will make an out, but the odds are drastically different between the two.

The Giants are the .125 hitter, they have been for years. 2021 by no means is guaranteed to be a strikeout, but until we see them actually get a hit, we're going to expect the strikeout.
Pages: 1 2 <<Prev | Show All |