Longest stretch in my life that I haven't been to a Mets game. My late father took me to games as an infant and I'd been every year before last year.

So, I thought I'd make the game thread. Lineups not up yet, obviously,

Be a great time to get the bats awakened. Tomorrow is yet another off day -- but the team should be playing regularly from now on, and it's time to get to raking!


I think that would be a useful add to the Pen, for sure!

I still wish they'd swap Dom with Conforto in the lineup....Dom is swinging at too many bad pitches.

Road Trip to Philly and St Louis next.


Agreed -- Dom's approach has been a bit off lately. Wouldn't mind a game with Davis in LF and Guillorme at 3B ahead of the off-day.

..
Named Later : 4/28/2021 12:55 pm : link
I absolutely love the idea of DeGrom following Peterson in the rotation. After watching Big Lefty nibble around the strike zone with off-speed.....here comes Jake bringing the heat !!
Sometimes as fans
pjcas18 : 4/28/2021 1:32 pm : link
we don't realize how lucky we are when moves get made or don't made or how close they came to being disasters. We know about acquiring trying to acquire Carlos Gomez vs acquiring Cespedes, the almost trade of Wheeler for Jay Bruce.

And now if you believe Peter Gammons: 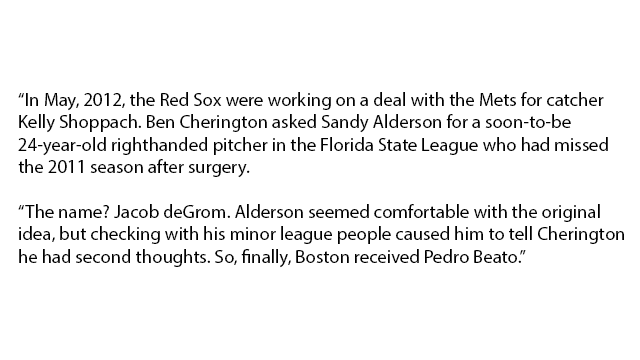 
Vlad is unreal. I personally was never too concerned with him (wasn't sure he'd have monster power due to his launch angle, which obviously would have looked disappointing vs. some of the 40+ homer guys we see now ) but he was still 9% better than a league-average hitter for his age 20-21 years, let himself get a bit porky. Blue Jays are going to be scary for a while. Very young, money to spend, and an excellent farm.

- Some interesting early season "breakouts". Nick Solak (former Yankee farm hand) with 7 homers (13th in the league in fWAR), Cedric Mullins 1.2 fWAR and like Lebron James, fans keep looking for the "best player" and that best player remains Mike Trout. Acuna or Soto are likely "next best player" or maybe it's Vlad etc. But Mike Trout remains the clear best player in baseball and in NY/Boston etc would be a true legend (he's a HOFer either way).
Good stuff
pjcas18 : 4/28/2021 4:39 pm : link
DMM, plus we're seeing the closest thing to Babe Ruth with Ohtani, I forget the stats and obviously it's early in the season for a state like this to be terribly meaningful but the stats was something like he was the only pitcher to start a game while leading the league in HR's since Babe Ruth in one of his last starts.


Ohtani is like something we've never seen before. (Yes, I know people are bristeling at this saying there were Negro league two way superstars), well I wasn't alive to see it, so let me live! (I do think it's very cool MLB is finally shedding a light on some of these Negro league players, some really incredible stuff. I had never heard of Oscar Charleston... some regard him as one of the top 10 greatest baseball players to ever play the sport!

As for Ohtani almost seems like he was created in a lab. He's 17th in the sport in sprint speed! He's very marginally behind guys like Myles Straw and Tim Anderson, 2 legit speedsters, he's 3rd in barrel, only Giancarlo Stanton has hit a ball with a higher exit velocity this season.. oh and as a pitcher he's 8th in velocity (97.2) The Mets have been pretty mediocre but this has been a fun start to the MLB season.
Annnnnd
Everyone Relax : 4/28/2021 7:02 pm : link
Here we go again
This is really growing tiresome.
CooperDash : 4/28/2021 7:04 pm : link
Definition of insanity.
Well, one of these teams at least knows how to drive
CooperDash : 4/28/2021 7:11 pm : link
in runs. The Mets continue to be embarrassing.
Where do catchers get the authority to constantly ask
CooperDash : 4/28/2021 7:26 pm : link
the first base and third base umpires to call check swing balls or strikes? It’s literally all the fucking time and it’s annoying. Those umpires aren’t even looking for it most of the time IMO.
Getting really hard to watch...
dannysection 313 : 4/28/2021 7:30 pm : link
I'd say "poor Jake" but I guess that's probably not the right word.

Of the 155 innings on offense, there have been only three innings where this team has scored more than two runs in an inning.

I mean, who's the batting coach?

Said it in the other thread...Trout, Acuna, Guerrero, Tatis, Harper all off to great starts...and our guy who is supposed to be on their level has been flat out bad at the plate... He doesn't even look good up there.

I know it's still early but he's starting to dig a hole that's going to be tough to get it of .. an MVP type season probably already gone.
Eh, I’m not about the boos. Hate to see it so early in the season
CooperDash : 4/28/2021 8:02 pm : link
with your star acquisition. Lindor will get it going.

The problem is that with a 9 hitter lineup that already includes an automatic out with the pitcher, the Mets have 5 or 6 hitters that are completely lost. Every single game. I get that players across the league get off to slow starts. But I’m willing to bet that it’s not almost the entire lineup for those teams.

There’s too much talent to not turn it around, but this is such a waste of good pitching and taking advantage what they are giving you. Such a letdown to the start of the year. And we are almost a month into it.
Do we have a new hitting coach this year?
BigBlueNH : 4/28/2021 8:07 pm : link
It was Chili Davis last year, right? I really hope this is just bad luck and that coaching is not a contributing factor.
1 hit against who?
Everyone Relax : 4/28/2021 8:26 pm : link
Pivetta?? These games are brutal because I love watching degrom pitch and can’t stand watching the Mets at the plate
One hit?
pjcas18 : 4/28/2021 8:27 pm : link
that's all we got? One goddamn Hit?

It really is depressing watching this. A lot of times you FEEL like your team can't hit and truth is the numbers are better than you think .. but this Mets team is truly at the bottom of the league for everything...


Lol, Matz continues to suck for the Mets even when he’s not on the team. Pitches like a stud the first four games until he faces the Nats. You just can’t make this shit up.
Yeah might do him good...can't hurt!!
moze1021 : 4/28/2021 9:02 pm : link
The scary thing is he is now in a stretch of over 100 games of being an average to slightly below average hitter...

Sure, maybe it’s still early. Totally could be. But all of these guys absolutely sucking all year at the same time? Very odd and likely improbable.
Can’t get
Pete in MD : 4/28/2021 9:41 pm : link
hits off of Nick Piveta? Really need to change something up.
Please - this isn’t Sandy’s fault. He can’t hit for the players too.
CooperDash : 4/28/2021 9:44 pm : link
These are all proven, elite offensive players. They will hit eventually. I’m just curious if something has changed with the team approach.
Last year Chili Davis was at home because of Covid
BocaGene : 4/28/2021 9:49 pm : link
and the #2 batting coach took over for practice & during game and the Mets hit .270+ as a team.

This year, Chili is here...coincidence, I don't know but the results are so startling different.
Disappointing start to the season
moespree : 4/28/2021 9:49 pm : link
Zapped most of the good energy the offseason brought, at least for me it did. I suddenly have the exact same feelings I have all the previous years.

The good news is they really can't do much worse. So, even just 1 guy turning it around on offense will help them.
2 measly singles, 15 strike outs
BigBlueNH : 4/28/2021 9:52 pm : link
at Home, against a line-up of thoroughly mediocre, non-strikeout pitchers. Hard to believe, harder to watch.
Oh and another thought - this is now a minimum of 3 losses
CooperDash : 4/28/2021 9:55 pm : link
because we have poor defensive players in their unnatural positions (JD and Dom). The ball that Dom couldn’t catch earlier in the game - sure, it was a tough play, but he was there and I feel that even an average fielder would have caught it. Even McNeil, Conforto and Luis have cost us on the defensive end.


This is a really good point that shouldn’t be overlooked.
these losses really aren't on the defense
CMicks3110 : 4/28/2021 10:07 pm : link
I think they are much improved this year by and large. McCann and Lindor have made a big difference, Pete has improved, and Nimmo has improved. Conforto has regressed, and JD is well, JD. But you can really see the analytics in play, there have been a lot of balls hit right at our defenders, more than I can ever remember.
Jesus fucking Christ
CooperDash : 4/30/2021 8:08 pm : link
Will this team ever wake the fuck up on offense? Or does Chili Davis have no fucking clue what he’s doing? Just bring back the backup hitting coach from last season.