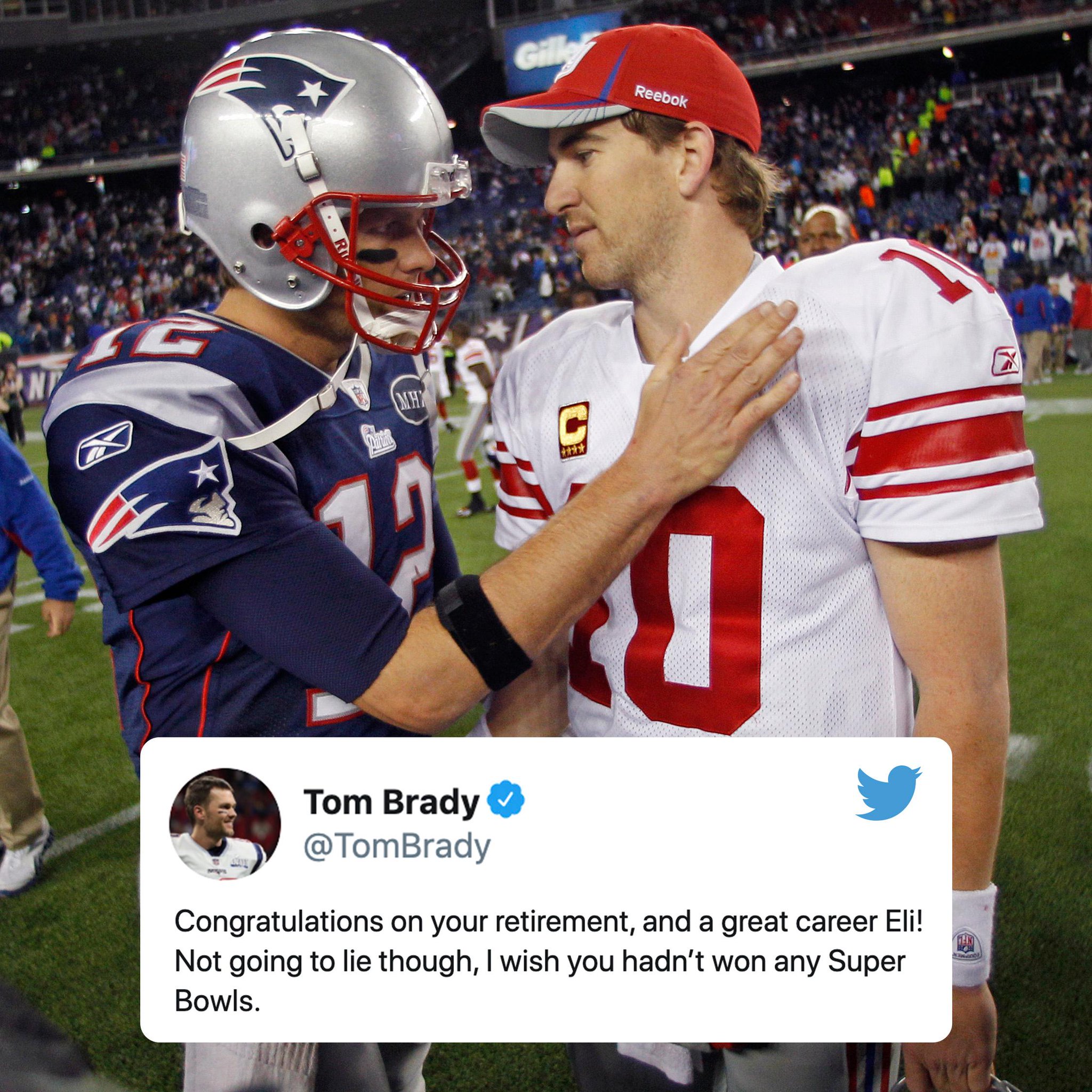 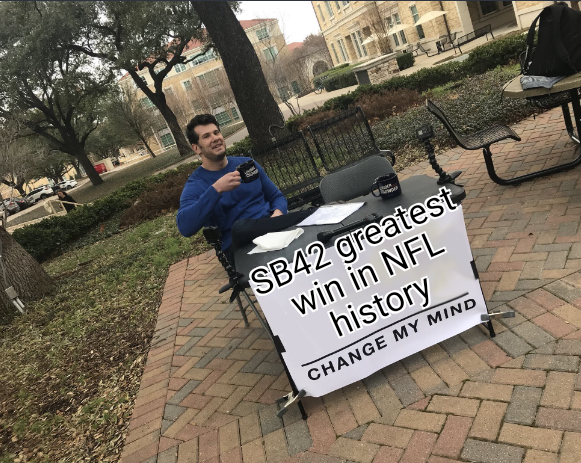 
I honestly don’t think I would. That win to me is the pinnacle of what a fan of a team can experience. I still can’t believe it sometimes. Complete euphoria.
RE: I never really got what was wrong
Trainmaster : 5/3/2021 7:27 pm : link
Really? The smug look on his face and his laughter at the mere suggestion that the Patriots would only score 17 points isn't "over the top"?

What makes his reaction even better is they didn't even score 17 points.


Indeed. It was crazy as it happened, the Giants kept facing more and more impossible opponents, every single one on the road.

And then in the finale, a literally invincible team that would've gone down as the greatest in history if they had won.
Probably the most out of left field
bubba0825 : 5/3/2021 7:41 pm : link
Champions of any major sports league all time.....only to be even more out of left field 4 years later. Beating Dallas on the road had to be the most satisfying win of all time
...
SFGFNCGiantsFan : 5/3/2021 7:43 pm : link
I was rather confident going into XLII. I was buying into the 'Team of Destiny' thing, we had played the Pats tough in Week 17 & nearly won, & the postseason Pats weren't the mid season Pats.

I remember visiting cousin who lives up in Maine that October '07. The Pats were hosting the WFT & beat 56-10 or something. Just a complete domination. And that was a good WFT team. They looked like they were playing on a different level than everyone else.

I don't think I'd trade that one for 2 lombardi's.


I don’t hate Brady. I used to but he’s won me over as a competitor and a person.

That being said, we literally will never have a better Giants win EVER. We beat the best team in NFL history when it mattered the most. We were a wild card team that nobody gave a chance. We were Rocky v Apollo. Greatest non personal night of my life. I’ve still never felt that euphoria again.
bradshaw.
SFGFNCGiantsFan : 5/3/2021 8:20 pm : link
I don't hate Brady either, but he was so damn cocky before that game. 'We're only going to score 17 points? Ha, ha. Okay. Is Plax playing defense?'


Rubbed us all the wrong way. Which no doubt made the win all that much sweeter.
Not a Brady fan, and he never should have SAID that about
CT Charlie : 5/3/2021 8:32 pm : link
17 points. But if you put yourself in his shoes, it really was ridiculous to think that we could hold them to under 20 points, indoors at a neutral site, after they'd racked up 38 points against us at Met Life in December.
I was watching it live
rasbutant : 5/3/2021 8:46 pm : link
I’m pretty sure it was Strahan not Shannon Sharp. Mike went on to clarify that he had to trade the two to him. Not just give up 2 for 1 in general. That the two have to go to Mike. Brady still said yes. I believe but it was hard to make out because everyone was talking over each other. So he may have just been saying yes to someone else.
Brady had ZERO respect for Eli and the Giants. None. Zilch. Nada.
glowrider : 5/3/2021 8:47 pm : link
According to a Skip and Shannon segment discussing the subject, Brady looked down on us as not in his class. Peyton was worthy, Eli was goofy. We were a joke team. It was as much about being taken out by Eli and the 9-7 wild card Giants, a team deemed unworthy, as it was the perfect season.


Me neither. The Patriots hadn't scored less than 20 all season. And they put up 38 pts against the Giants a few weeks earlier. I honestly thought the laughter was more about Plax saying it than the score itself. Hence the "Is Plax playing defense?" comment. It is fun to look back on since they only scored 14, but that quote itself never really bothered me.
RE: Brady had ZERO respect for Eli and the Giants. None. Zilch. Nada.
shyster : 5/3/2021 11:39 pm : link
In comment 15252317 glowrider said:


"According to Skip and Shannon"? I can't think of two guys I'd put less stock in.

I don't recall TB saying anything disrespectful about that NYG team. Unless you have words coming out of his mouth, the thoughts expressed are Skip's and Shannon's, not his.

The 2007 Giants were 10-6 and, of course, finished 14-6.
I've had a very interesting in long life
Grizz99 : 5/3/2021 11:52 pm : link
With many highs and almost as many Low's. It's almost blasphemy and disrespectful to put a football game in the category of greatest moments in a busy life. But that's how I feel. There were a lot of peripheral circumstances, but the joy of that day transcended everything. I called my son on the phone "Dad,can you hear the cars honking in the background?" I was with a high-society lady, a published author and doctor, we walked up 1st Avenue and strangers walking the other way gave me a hug. I am familiar with a life story and work of Bob Capra, and he's the man who took the picture of the sailor kissing the girl in Times Square at the end of World War II. I thought of that that day and not without a little guilt of comparing something so important to a football game. But the euphoria was contagious and nothing will ever compare
It's also the reason that winning now is simply not as important. I Endure the bed years with equanimity. After all I've been to the Mountaintop and nothing will ever equal it.
Late at night, only a phone to work with, apologies for the awkward writing
18 and 1
kdog77 : 5/4/2021 12:13 am : link
I would tell Brady to his face he couldn't trade me anything in the world for the Giants' 2008 Super Bowl win and despite all his success, fame and fortune, Eli's Giants are the one team he could not beat when it mattered most. Let him carry that blemish for the rest of his perfect life.
Good
Geomon : 5/4/2021 12:14 am : link


Cris Carter is also still burning up inside over the 41-0 NFC Championship beating he took at the hands of the Jim Fassel/Kerry Collins Giants.
Best possible news
The Jake : 5/4/2021 3:42 pm : link
The GOAT QB says our Super Bowl win over him is more meaningful than two of his own?

For starters, the fact that they only wound up scoring 14.