Bill L : 5/10/2021 3:41 pm
This article talks about some of the things that we’ve discussed here regarding the interactions between DG and Zeus ge, including how much Judge was the”decider” on draft day picks and deals.

I hope it wasn’t linked previously; I glanced but did t search all that carefully.
Link - ( New Window )
Pages: 1 2 <<Prev | Show All |
I’ll add
Tuckrule : 5/11/2021 9:26 am : link
The rebuild is over. Now it’s adding pieces that fit the teams dynamic so long as jones is the guy. We have 2 first round picks next season. Those 2 players, if jones is the guy, will significantly enhance this team whether that’s an offensive lineman an edge/DE type or even a dynamic tight end like Wydermyer.
I get the..
FatMan in Charlotte : 5/11/2021 9:31 am : link
frustration people have had with DG, especially his arrival after several years of poor records, but the idea that his slow start at rebuilding a team is unprecedented for good GM's is offbase, as is the idea that overhauling a poor roster is easy.

Ozzie Newsome took over a bad Browns/Ravens team and didn't reach .500 until his 4th season. Didn't have a winning record until his 5th

John Lynch (who is often credited here with rebuilding the Niners "quickly") has had 1 winning season out of his 4.

Immediate success hasn't happened for many GM's, but we should at least see that progress is being made.

I'm not a betting person, but if I was, I would place a good bet they're going to win >7 this year. For f*cks sake, they almost won 7 last year (with new coach, new offense, extremely young OL, no OTAs, no preseason and starting 1-7) with the worst offense in the league!

Despite all that, they finished the '20 season 5-3 and then added multiple playmakers. Do you really think Golladay, Toney, Rudolph and getting Barkley back isn't going to make a difference (for DJ and the team)?

Also, the young OL is more experienced and should have a normal training camp, preseason, and our D which was good in '20 should be even better in '21, etc., etc.

He has turned over 51 roster spots of the 53 man roster he inherited, in some instances multiple times. 96%.
That's how bad the roster was that was inherited. And if you're going to say that he shouldn't have shipped some of those people out, please state who and why.

He had 21 draft picks, and 3 free agency periods to do so. He also had to replace the franchise QB.

How fast was he supposed to turn over the ENTIRE roster including franchise QB with finite resources? Seems to me year 3 or 4 should start to show some dividends, and we've now started to see them.
Short-term memories
Eric from BBI : Admin : 5/11/2021 9:33 am : link
you have seen threads like this in the offseason the past two years. Then the Giants have another losing season and everyone wants Gettlmean gone.


Just a point of clarification, the purpose of the article wasn't to tell you that the Giants record over the past 3 or 6 or whatever years is anything other than what it was. The point was to describe and discuss the working relationship among among members of Giant management, with a particular emphasis on Gettleman and his head coaches.
RE: I get the..
Dr. D : 5/11/2021 9:35 am : link
In comment 15260395 FatMan in Charlotte said:

You're right, forgot. Damn it! That's why FMIC said he would give me a million dollars! Sonafa...


Don't take some sarcasm too hard. After all, it was just in response to your post saying its hysterical the average fan doesn't know what a rebuild means, which has to have been made tongue in cheek, right?

But more importantly, back to the question of your definition of rebuilding. I think Jones still could be our go forward QB, deserves a 3rd year to show it but is still a major TBD. So what if he doesn't play well enough in 2021 but now the pieces around him look decent and some even strong...lets say he is determined not to be the future and Judge acknowledges that and go shopping for another QB next season.

Under your view, the rebuild would start over yet again and that makes no sense. It's not like the Giants are going to tear down the Defense and offensive line because they are looking for another QB.

Wouldn't it make more sense to suggest a team as poor as the Giants roster was back in 2018 started some rebuilding right away but the results were still bad so more had to get done, and some rebuilding was done incorrectly so those parts had to be redone altogether. After all, we still have Barkley, Hernandez, Carter, Peppers, etc. as guys who are still part of the starting package so surely they are part of the rebuild even though they came before Jones.

Simply put, the team has been rebuilding since early 2018. There is no perfect timeline for how long it takes but it has continued even through the Draft last week. On paper the NYG roster looks much better than 3 years ago but that has not translated yet enough on field to suggest where they are on rebuilding. If the Giants put up a winning record and Jones looks good the the rebuild has basically been addressed (though improvement and upgrades will always go on). If they continue stumbling through a losing season or Jones struggles, the rebuild just continues.
RE: I’ll add
NYGgolfer : 5/11/2021 10:09 am : link
In comment 15260388 Tuckrule said:


The key part of this post tells us the NY Giants are most likely still rebuilding today. Again, continuous improvement happens with all ball clubs and that is different.

The Giants need to put up a winning record and one that has some realistic chance for sustainability to suggest the rebuild is over.
Dude
Tuckrule : 5/11/2021 10:35 am : link
We’re having a discussion online. Your nitpicking every single word. If I had to respond to your stuff it would take me about 4 days and 50 Pages. The This isn’t an exact science. Some common sense has to kick in. Every teams rebuild is different it isn’t one boiler plate form for a rebuild. I said if jones is the guy the roster building is near done. We are talking roster building. That’s what a rebuild means. To me, jones has showed a lot with very little. Let’s see this year then we can revisit this convo
golfer...
Brown_Hornet : 5/11/2021 10:37 am : link
...maybe this will help:


Considering we haven't had a winning record, the "rebuild" is still happening. Does that change what has been said in the posts? We just added several key players in the offseason and draft. Whether or not that is "continuous improvement" or an extension of the rebuild is just semantics.

So yes, technically, the reshaping of the core of the roster is complete. Now we see if it translates onto the field and whether it was successful or not.


Yes, its just a discussion for average fans. One that is fine to have and really isn't about rehashing the past or blaming anybody. Its discussing what truly a rebuild is and where the NY Giants are in that process.

And agree, it isn't an exact science or boiler plate. Nor is it just about the QB for the future but also realizing how critical that piece is.

And roster building in my view is much closer to continuous improvement & upgrading. Rebuilding means basically an entirely new structure with key core elements need to be found/built from scratch.
Considering..
FatMan in Charlotte : 5/11/2021 10:52 am : link
the roster has been turned over by 98%, that's pretty significant to show that a rebuild has taken place and the GM now has to show results.
RE: golfer...
NYGgolfer : 5/11/2021 10:53 am : link
In comment 15260481 Brown_Hornet said:


Either works. It's not like a playoff-level football team that won 11 games in 2016 didn't exist, right?


Not my intent. Came into the thread when it was posted the average fan doesn't know what a rebuild is, and that it doesn't start until a QB for the future is found. The former which we are discussing and the latter of which I disagree with.

But at the end of the day, as mentioned by several, the rebuild continues until this team puts up a winning record (with some sustainability). Rebuilding/building without ultimately winning more than you lose is just simply roster turnover. And any team can do that.
RE: RE: RE: golfer...
NYGgolfer : 5/11/2021 11:11 am : link
In comment 15260516 Britt in VA said:


I agree that it had those elements. But how many fans really knew that at the time?


A lot to unpack here. I won't address the Rodgers comment because it's just silly. If you don't think he has the ability to make chicken salad than I don't know what to tell you.

As for Jones, yes, I expect the 6th pick in the draft to be a difference maker and create points. Do you really think Jones was picked to be just another spoke in the offensive wheel?

As for Josh Allen, many of us have been over this real estate before with this Josh Allen comp - not sure if you have been - but Allen showed considerably more through two years than Jones. In particular, he showed an incredible ability to make plays with his legs and be force rushing the ball. I could relist the stats, but suggest you check them out.

I mostly agree this should be the year where Jones should have no more excuses.

Again, my issue with your comments was you using the phrase "paying dividends". Like something has been accomplished yet. Nothing has. Sure, we may have felt better last year under Judge and that we seemed to be better prepared and coached. But it means nothing until we finish the season with more wins than losses.
2018..
FatMan in Charlotte : 5/11/2021 11:20 am : link
would have been difficult to sustain without a lot of revamping on the offense and to have the D stay at a high level.

In 2019, several key guys on D were injured, their OL was poor and the offense didn't improve.

While we had several D guys brought in on D last season, the feel was different. Our health was mid-low in the league. We didn't have gigantic contracts that hamstrung future moves. We added talent to the O. OL will still be a key element - but there are significant differences between 2018 and last season.
RE: I did.
NYGgolfer : 5/11/2021 11:23 am : link
In comment 15260551 Britt in VA said:


Ok, so what do you say right now? Is this a successful rebuild, is it done and the team will certainly put up a winning record in 2021?

As an aside the defensive side of the ball from that 2016 team also collapsed the next year and has been ravamped completely as part of this rebuild so it was more than just McAdoo's offense, right?


If the offensive line holds up and delivers what they believe it will, then yes. That's always been the key.


Agree somewhat but would say this differently anyway. The Offensive line doesn't need to hold up, it needs to improve, and fairly significantly.

And that improvement has to come from basically the same guys on the roster as last year sans swapping Zeitler with Fulton since really no other investments were made this offseason. Development of Thomas, Peart, and the other young guys is paramount.
RE: Sorry
NYGgolfer : 5/11/2021 11:34 am : link
In comment 15260578 FatMan in Charlotte said:


How do you know its over? If the Giants put up another losing season in 2021 there is far more still to be done.
He needs to win...
trueblueinpw : 5/11/2021 1:08 pm : link
I think Getty and Jints Central killed this draft and the entire off season. But... a good (and completely untested) off season hardly makes up for all the mistakes. And please, let’s not pretend there haven’t been enormous errors and brain numbing decisions by Getty & company.

I can't WAIT for you to have to wash Dave's old man balls! 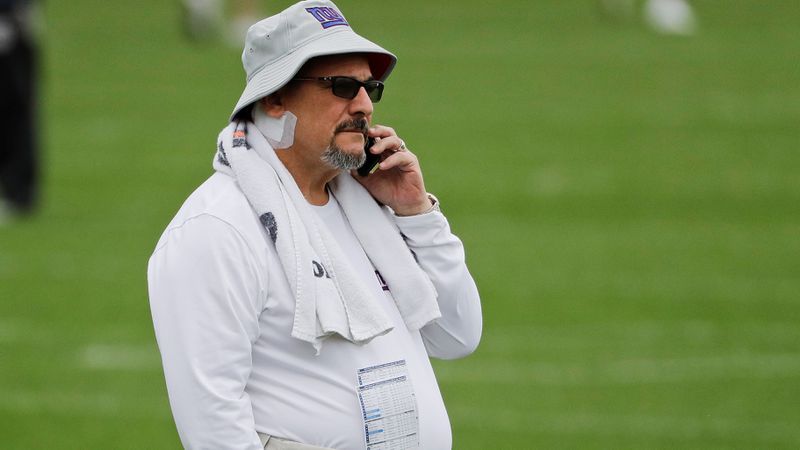