Maybe Gallant isn't well liked among the league and that is why he was fired from Las Vegas despite taking an expansion team to Stanley Cup. Perhaps Ron Francis has eyes on a current NHL assistant coach and did not want to hire during the season.
RE: RE: Ron Francis
Victor in CT : 5/12/2021 12:55 pm : link
In comment 15262112 Jay on the Island said:

Guess I shouldn't be as surprised as I am when I see the knee jerk responses that we so often see.
There could be a lot of reasons
pjcas18 : 5/12/2021 1:10 pm : link
Gallant doesn't have a job right now, my comment was more about Francis than Gallant.

And don't assistants get hired in season to start with their new tea,m after their season ends often? it seems like it to me at least, so I'd be surprised if that's the hold up and waiting only hurts the Kraken IMO as more jobs potentially open up.


And I know nothing
pjcas18 : 5/12/2021 1:15 pm : link
about Knoblauch as a coach, but if that's the 3-game sample being referred to I think it's good to remember that Drury is the one who hired Knoblauch to coach Hartford. Drury was GM of the Wolfpack in addition to his Rangers assistant GM role.

So, the knee jerk reaction would be to think the decision was based off a 3-game sample since Drury knows him well (if Knoblauch is hired to be HC which I don't think he will be)
I don't know what Gallant's deal is
PwndPapi : 5/12/2021 1:17 pm : link
Successful coach, but like Torts, seems to wear out his welcome fairly quickly.

Yes, we want a guy who knows how to coach professional hockey. We also need someone who is a teacher and can bring these young kids along in their development. Based on his history, neither Gallant nor Torts are that guy.
RE: And I know nothing
PwndPapi : 5/12/2021 1:20 pm : link
In comment 15262156 pjcas18 said:


I'm not suggesting Drury will based his decisions on 3 games. My comment was with respect to those playing along at home.

Fine if he doesn't like Gallant there are plenty of other options. They could have hired an assistant coach of a current playoff team now. I am pretty sure that the rules aren't like the NFL.
Here's a longshot
JohnF : 5/12/2021 1:35 pm : link
but he's worth looking at:

He also has Ranger ties, was a player for the team 15 games 1989-92, and had a professional career for 10 years. His teams at Union always seem to play tough and agressive, and have done very well.
Another two names
PwndPapi : 5/12/2021 1:41 pm : link
Rikard Gronborg - Highly though of HC Swiss team and Assistant HC of the Swedish national team. Had success everywhere he's been. Former defenseman. Youngish. May bring fresh ideas to the table. Bonus points for facial hair. 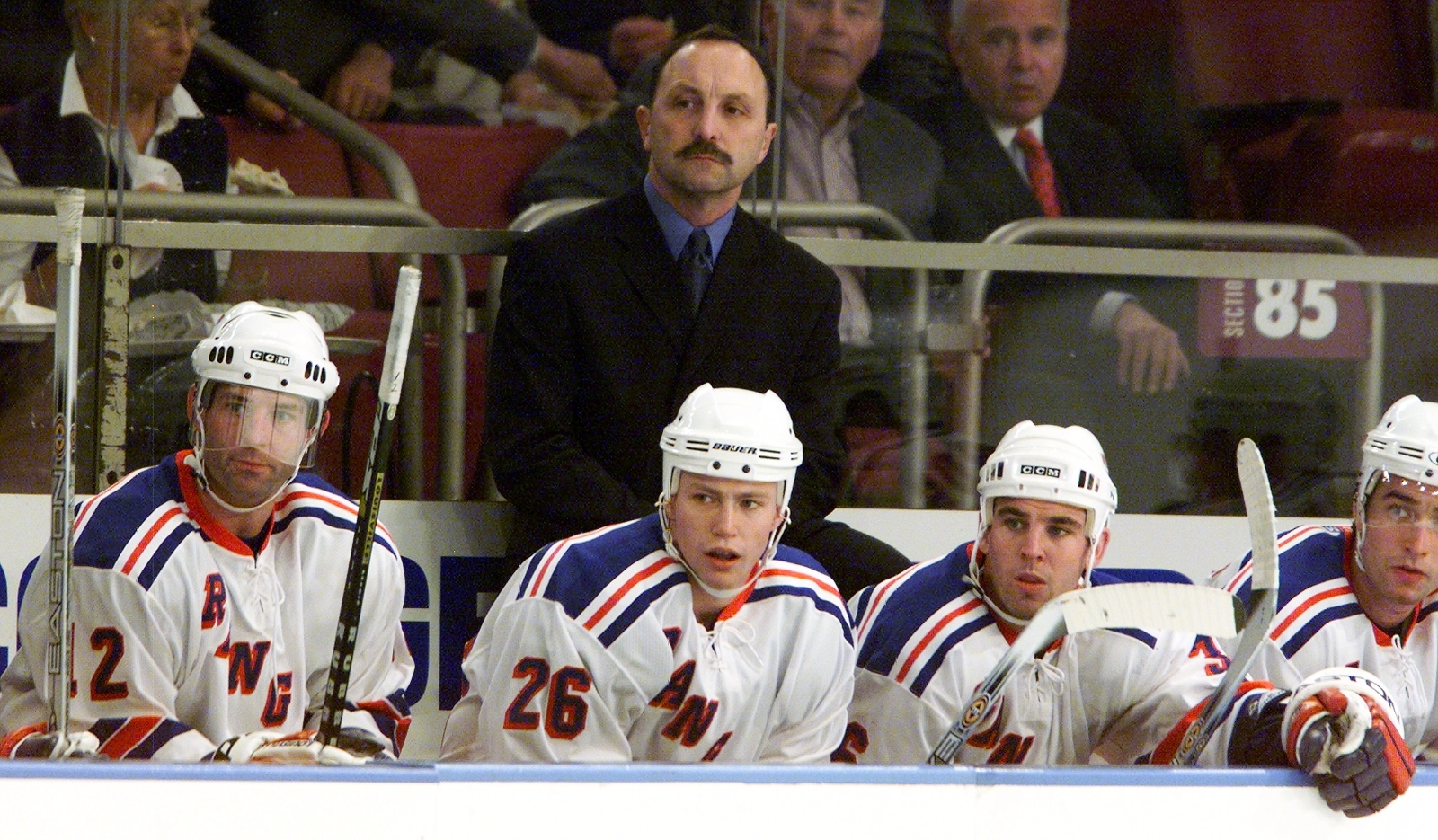 You may remember Burrows as the 2011 SCF villain vs Boston - he (allegedly) bit Patrice Bergeron and had a good series otherwise (an OT GW in game 2).

He is one of the up and coming coaches IMO that the question isn't if he'll be a head coach, it's when.

Love the power play creativity and in general players rave about him - when you hear commentary on an assistant coach you know something is different about him.

and I love his story of working his way up from the ECHL. I wonder how many players went that route - you know you're earning your shit when you don't get drafted and wind up a legit NHLer.

I hope MTL keeps him though.

Gallant - Pros: he did the most with the least. He led the Vegas Golden Knights to the Stanley Cup in their inaugural season and led a somewhat pedestrian Panthers team to the best record in their division in 2015. That team had a nice blend of veterans (they had Jagr and Jussi Jokinen) and youngsters (like Barkov, Ekblad, Trochek and Huberdeau) much like what the Rangers have now. He was a tough-ass player in Detroit and that carries over into coaching philosophy.
Cons: he's been fired unceremoniously by two different teams despite his successes. The Panthers literally fired him, kicked him off the bus and made him call his own taxi. There's something there (perhaps an attitude issue?), but I don't think it's ever been concluded what.

Tocchet - Pros: led an anemic and a dysfunctional Coyotes organization to be somewhat respectable. I mean it can be said that he squeezed every ounce of talent out of that team. Won two Stanley Cups as an assistant with Pittsburgh and was a hell of a player back in the day for the Penguins and Flyers. Tough and hard-nosed coach, who expects the same out of his players.
Cons: in 6 seasons with the Lightning and Coyotes, he only made the postseason once, which amounted to a first round exit.

Boudreau - Pros: He has the second-highest winning percentage in NHL history for a coach who has coached at least 900 games. In 12 full seasons behind the bench, Boudreau has made the playoffs 10 times.
Cons: In those 10 playoff appearance, he never made the Stanley Cup. Also got on Rangers' fans nerves when he said MSG wasn't that loud. Similar to Gallant, he also has somewhat of a short leash despite his successes. Perhaps he rubs ownership/management the wrong way?

Claude Julien - Pros: Been to the Stanley Cup twice with the Bruins. Has a puck-dominant philosophy, which can lead to a lot of offense.
Cons: has health concerns. His most recent stint in Montreal was rather unsuccessful, as PJ can attest to. Hasn't been past the first round since 2013.

Mike Babcock - Pros: He's been a HC since 2002 and with the exception of two seasons has made the playoffs every single (full) season. His teams are very disciplined. Babcock's teams generally focus on skills and puck possession over physical play and toughness. Been to three Stanley Cups.
Cons: many of his players absolutely hate his guts. He can be a real asshole (just ask Mitch Marner). He's essentially a persona non grata.

Bob Hartley - Pros: another highly-winning HC. He's a hard-ass and a disciplinarian (could be a con). Think of Tom Coughlin with ice skates. Coached Chris Drury to a Stanley Cup in Colorado in 2000-2001.
Cons: His most recent stint with Calgary was a bust. Hasn't coached in the NHL since 2016.

Patrick Roy - Pros: HOF goalie. Ex-teammate of Chris Drury.
Cons: only made the playoffs once in 3 years coaching the Avalanche (though he won the Jack Adams for best coach). Made A LOT Of questionable coaching decisions.


John Tortorella - Pros: winningest American HC in NHL history. Gets the most out of his team. Had a lot of success with the Rangers. Knows New York and the media. Dolan loves him. Uncle Larry hates him. Won the Stanley Cup.
Cons: can be very hard on young players. Andddddd his reputation precedes him. He can be a reaaaaaaaal prick.
RE: RE: RE: I think they're almost definitely going to hire a veteran coach
Essex : 5/12/2021 2:17 pm : link
In comment 15262244 Anakim said:


I'm gonna backtrack a bit about what I said earlier about Julien and I'd probably rank it:

They also may sit tight and see if one of the playoff teams fire their HC. Mike Sullivan perhaps?
Sullivan
pjcas18 : 5/12/2021 2:21 pm : link
is probably going to win Jack Adams (or he should), has a Jack Adams winner ever been fired?


More than one ;)
Babcock's time in TOR
PwndPapi : 5/12/2021 2:24 pm : link
Should be a learning opportunity. Even one of the most successful HC in hockey couldn't win until he had the horses to play a particular style and those young kids grew into the NHL game.

A lot of use were absolutely expecting entirely way too much from Laf/Kakko/Krav during their rookie/soph efforts during a shortened pandemic affected season. Patience.
Greg Carvel of UMass seems to be a popular name on Ranger blogs
Greg from LI : 5/12/2021 2:27 pm : link
Turned UMass from a laughingstock to national champions in 5 years, has a decade's experience as an NHL assistant, still fairly young at 50.
RE: RE: This is going back a while but wasnt there a post-game
mfsd : 5/12/2021 2:30 pm : link
In comment 15262264 Anakim said:

I'm not that concerned about the coaching hire - it's not like the NFL where you need a huge adjustment period. I thought they might hang on to Quinn in case someone better pops loose during the season. I don't see an inspiring set of candidates out there right now.
RE: wow....I have no memory of Dixon Ward on the Rangers
Victor in CT : 5/12/2021 2:53 pm : link
In comment 15262232 Greg from LI said:


He's always mentioned as the next Euro coach to get a shot at an NHL job.

The disincentive is Dolan... that's it. And as bad as he is, at least he does tend to put a lot of green in your pocket before he acts crazy and irrationally.
Agree MAB
PwndPapi : 5/12/2021 6:25 pm : link
Also, I'd add that despite the competitiveness in a division of Crosby, Malkin, Ovi et al, the NY Rangers finished just a handful of points out of contention - in a shortened season. A couple additions and some growth from the young players can close that gap pretty quickly.

And to MAB's point, no successful leader takes or declines a job based on their ability to win today. There's always work to be done and a lot can change for us and them between now and the start next seaosn.
Carvel of UMass, etc.
ColHowPepper : 5/12/2021 6:42 pm : link
Strains sense of fit to think that one NE collegiate coach will be hired to replace the fired NE collegiate coach. Quinn had some positives, but he was out of his depth in bringing a young team to a tier competitive with veteran, tested clubs. Can't see it.

Nor do I see Anak's list of failed or re-tooling re-treads who have 'been there done that' with what is, in my parochial view, kind of a unique set-up: a lot of talent, a lot of pieces on the team and on the come, mold and meld them to take a step up, but he has to fit this situation.

I hope Drury is thinking outside the box here, along the lines of pj's Burrows.


You remember the Parcells quote to Simms regarding Washington “they hate us so much they like us”? I wonder if that applies to Torts and Larry Brooks...
Pages: 1 2 <<Prev | Show All |