Pretty crazy. I thought doing it was impossible to do this unless they physically caught the guys. Curious how it was accomplished.

U.S. recovers millions in cryptocurrency paid to Colonial Pipeline hackers - ( New Window )
You would think
JB_in_DC : 6/7/2021 4:34 pm : link
this hurts the crypto market...
The included article to CNN suggests the feds may have gained
glowrider : 6/7/2021 4:41 pm : link
Access to the hackers networks, and that Colonial was following directions for the xfer. Also says they deemed the hackers to be less than ninjas.

My supposition after reading the articles is the hackers got hacked by the good guys, and not that a transaction was reversed by a govt actor on the blockchain, based on the info provided.
This whole story doesn’t smell
eric2425ny : 6/7/2021 4:46 pm : link
right to me from start to the apparent finish now.
Unless they nabbed the hackers
KeoweeFan : 6/7/2021 4:55 pm : link
What's to stop them from doing it again, if only for retaliation?
RE: Unless they nabbed the hackers
Semipro Lineman : 6/7/2021 4:57 pm : link
In comment 15281777 KeoweeFan said:


They'll probably rush a Hollywood agent team to get them signed to a reality TV contract. Every Sunday Night, it's "Real Hackers of Russia"
RE: RE: Unless they nabbed the hackers
Chris in Philly : 6/7/2021 6:18 pm : link
In comment 15281780 Semipro Lineman said:

Just a guess, and the article definitely says otherwise, but it sounds like they caught the perpetrators (maybe) and worked out some kind of plea - give us back some of the BTC and maybe tell us how you did it to help us build safeguards against future ransomware attacks and you can keep some.


I believe Colonial did. But the hackers typically threaten to publicly release (or at least dump it on the dark web) some of the encrypted/stolen data if the ransom isn't paid. That data could easily contain a company's IP and/or personal information for its employees.
RE: RE: RE: Why did they only
Bogey : 6/8/2021 7:51 am : link
In comment 15282112 pjcas18 said:


IP would be changed, but employee personal info would be bad.

Still cannot understand how these hackers do not get caught. I would have to believe the US Air Force has much better equipment and hackers themselves. (I think the USAF is in charge of US cyber security, iirc?)
RE: RE: RE: I don't know anything, but
Bogey : 6/8/2021 8:27 am : link
In comment 15282172 section125 said:


They're not caught because they often operate on foreign soil, typically in countries that are unfriendly to the US (Darkside is Russian-linked). Even if we produced rock-solid proof, Russia isn't likely to extradite the individuals to us.

I imagine the NSA was involved in tracking the money, though FBI itself probably has some significant capabilities in this area as well.
and while IP can be changed
giants#1 : 6/8/2021 9:38 am : link
it's still expensive for a company to do that (exact costs depending on what the IP is), not to mention the costs of monitoring any litigating any cases of infringement that pop-up (assuming that's even possible).

IP in this context = Intellectual Property
Regarding how they recovered it - from NYT newsletter this AM
Heisenberg : 6/8/2021 9:45 am : link 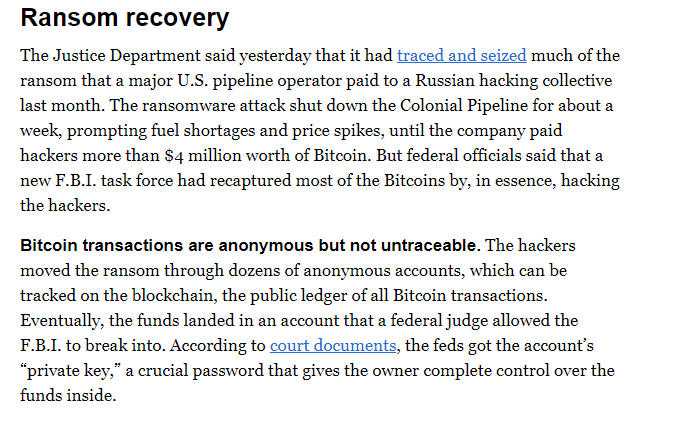 seems they hacked the hackers.
the FBI tracked the transactions through the blockchain
Eric on Li : 6/8/2021 9:46 am : link 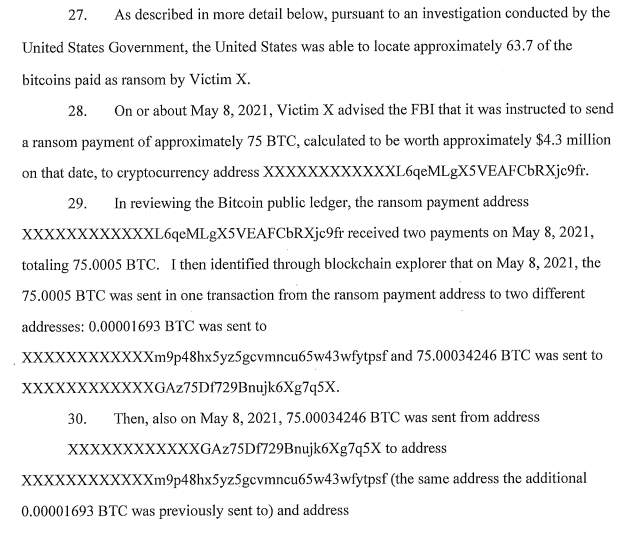 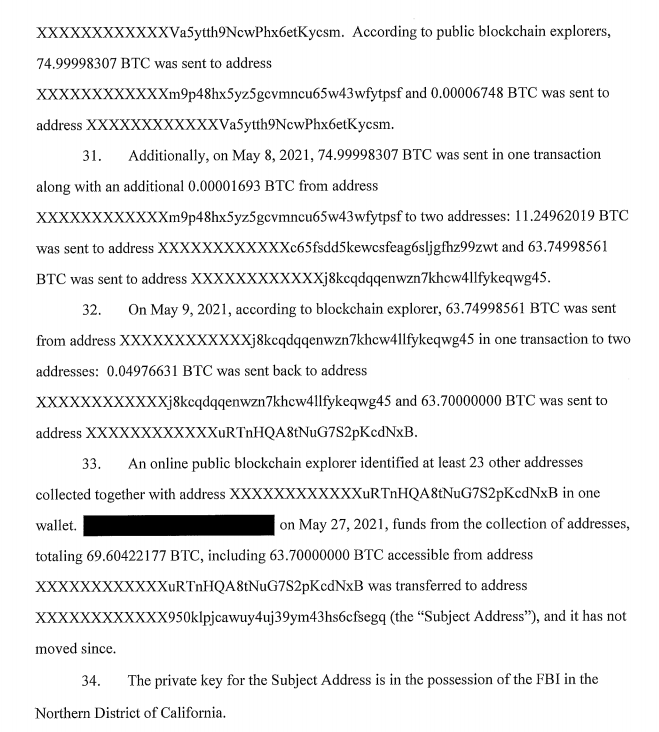 
Not necessarily true. It's possible the hackers left the money on an exchange like Coinbase and the FBI was able to force the exchange to turn the private keys over.
here's the seizure warrant for the 63 btc in the address they tracked
Eric on Li : 6/8/2021 9:51 am : link 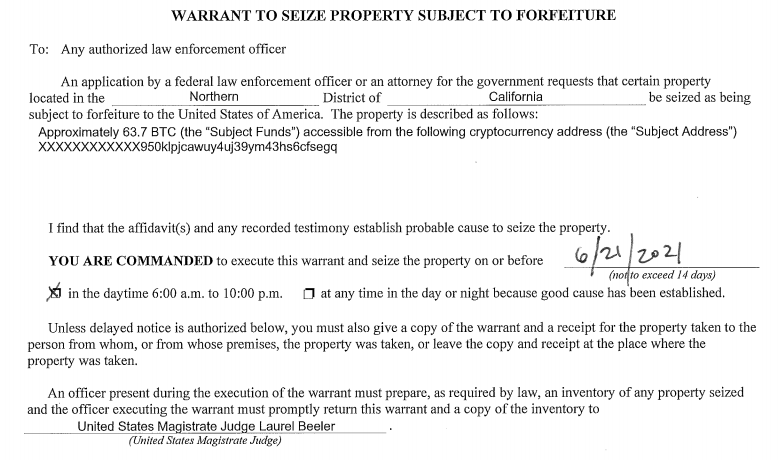 Looks like they were only able to seize the funds in the last few days so I guess add Colonial to the list of people pissed at Elon Musk.
from Bloomberg - the feds found a 'virtual wallet'
Del Shofner : 6/8/2021 9:52 am : link
"Because of the declining value of Bitcoin since the ransom was paid, the U.S. seizure in late May amounted to $2.3 million, just over half the $4.4 million paid weeks earlier after the ransom was demanded.

Deputy FBI Director Paul Abbate said at a Justice Department briefing announcing the seizure that law enforcement identified a virtual wallet used in the ransom payment and then recovered the funds. He said investigators found more than 90 companies victimized by DarkSide, a Russia-linked cybercrime group blamed in the pipeline attack."
I think IP is being used two ways in this convo
glowrider : 6/8/2021 9:55 am : link
IP is intellectual property and also IP address.

Agree value of the coins is less relevant than the number of coins. I like the idea of “Friday Night Hackers,” featuring Boris and Yevgenia. Last week they took over a meat processing plant. What hijinx will our cooky hackers get up to this weekend? Is love in the air?!? Will the annexation of Crimea be complete before the pipeline?

Tune in Friday at 8pm, Belarusian time so you won’t miss out! Special super anonymous guest star Vlad P, will be joining us in the Seventh half hour!


Excellent point
These guys were not the brightest
glowrider : 6/8/2021 10:24 am : link
There are so many ways to shuffle Bitcoin around that to not have done it is beyond negligent. There are dozens, if not hundreds, of “tumbler” services on the DarkNet where you deposit your Bitcoin, the transaction dead ends, and you get back a percentage that is completely untraceable from a pool of usually dirty btc mixed with clean btc people have deposited for spin-to-win type contests, that’s now all clean as a whistle with basically no trace route.


An offensive cyber operation such as this was almost certainly done by US Cyber Command/NSA. CISA is more of a defensive outfit.
Most of the articles I have read
pjcas18 : 6/8/2021 2:38 pm : link
said the recovery was done by the DOJ recently formed Ransomware and Digital Extortion Task Force.


When it comes to tech and cyber security the government is waaaaaay behind. It's just not built to have either the best or up and coming, and things move fast in that world. Not to mention the people good at this certainly have an anti authoritian streak. I joined the Navy to become a CTN back in 2011 because I saw this as the next major issue. Apparently, my 98 ASVAB wasn't good enough in a post-housing crisis world and downsizing the military. Soon I'll be joining a cybersecurity SaaS team on the other side selling. That's the one thing I'm envious about China with, they give you the best opportunities when you show aptitude.