Sox are playing the Blue Jays while we're there. We're Mets fans, don't care about the Sox or Jays, but thought it might be fun night anyway. Never been to Fenway and the tx are reasonable (glad they're not playing the Yankees!).

I normally try to buy good seats, but will prolly go cheap this time, since we don't care about the actual game.

Any advice? Any sections to stay away from?

"Classic old stadium" atmosphere. Probably worth a visit, unless you want all the "newest stadium creature comforts".

Also obstructed view seats have to say it on the ticket - I believe.

If you want to really spend for a fun experience, try Monster Seats if you can get them. Pretty cool view/experience.

Fenway is awesome despite the small seats. cool area around the stadium, cool atmosphere in the stadium, just a fun stadium.

Note: You may end up getting an obstructed view. It's hard to tell where those seats are in the stadium. If that happens, go see the "fenway embassadors". They can often find better seats and will exchange them for you. Good job by that place in general.
Use the seat websites that show you views from seats
jlukes : 6/8/2021 3:54 pm : link
there are lots of obstructed view sets that really aren't that obstructed and you can get those tickets for less than other tickets
Seats are tight, I left the seats
Jim in Forest Hills : 6/8/2021 4:10 pm : link
and went downstairs to drink.

Highly recommend sitting in the Pavilion Boxes on the 1B side. Great view of the entire park with the wall as the backdrop.


i love this level of hate, it's what drive rivalries and sports (all sports) are better IMO with rivalries.

I will say though from 1999 - 2004 when the Red Sox finally won I went to a ton of Yankees Red Sox games at Fenway and often there were seemingly as many Yankees fans as Red Sox fans.

I was at the Mussina almost perfect game on Labor Day weekend (2001 I believe) and the place was going nuts until Carl Everett ruined it.
..
Named Later : 6/8/2021 4:57 pm : link
We went to Fenway about 20 years ago. Tix were very difficult to get....the Sawx were playing well early that season and they were selling out every game. This was before they built the Monster Seats.

We ended up 'On the Roof' I think they called those seats Pavilion Box Seats, but we were actually on the roof along the first base side. They were good seats and the entire neighborhood around Fenway just oozes baseball.

Enjoy your game.
Careful, you may walk out
Bob from Massachusetts : 6/8/2021 4:57 pm : link
A red Sox fan! It's an old ballpark and lots of the seats are small and uncomfortable, but it's a great atmosphere to watch a game. It's great that Boston only has one baseball team vs New York, so except for the NY transplants, of whom I am one and of whom there are a lot, it's a Red Sox town.

I highly recommend going. I find that seats down the right field line between third base and the Pesky Pole are the best value. Right field seats are great for the bullpen and the right fielder, but it's too far away from the action. The third base side is fine but I think there are fewer seats.
Loved Fenway, except for the leg room
John In CO : 6/8/2021 5:56 pm : link
which, being 6'3", was kinda tight. So tight, in fact, that for the second of the two games I went to, I let my buddies sit in the seats and instead watched the game from the Bleacher Bar which is kinda built inside the monster (one of those gates you see in left/center field). Not sure if the bar is still there or not (this was in like 2009), and obviously not somewhere you would want to bring your son, but I loved it, especially when a ball rolled up to the wall a foot away from where I was standing. Pretty cool.
Dr.D
HopePhil and Optimistic : 6/8/2021 7:50 pm : link
Are you sure tix are available yet?

I’m doing a stadium tour later this summer with my son (8 stadiums in 13 days) and many teams just put tix on sale this past weekend for the rest of the season. Previously it was only one month in advance.

Yankee Stadium, Citifield and Fenway not yet available for August dates, but didn’t check for July.

My advice is to find our when they first go on sale and buy that day. They sell out quick and prices from secondary source increase quickly.
Fenway is a great stop anytime in Boston
Jimmy Googs : 6/8/2021 8:10 pm : link
Been numerous times and always love it. Amazed at what a little crackerbox feel it has but that's part of the charm.

The bars right near there (and mentioned above by others) are really fun as well and absolutely worth stopping by for to grab a drink, before or after...
RE: I have never walked into that ballpark.
Jim in Tampa : 6/8/2021 8:15 pm : link
In comment 15282634 Giant John said:

That's an odd take. You're missing out not going to visiting stadiums, especially Fenway.

I'm a die-hard Yankees fan and I think I've actually been to more games at Fenway than I have at any of the 3 Yankees Stadiums.

I don't think your "not giving them a dime" stance is hurting the Sox that much, since they pretty much sell out every game anyway (especially Yanks vs. Sox games).
Some great tips
Dr. D : 6/8/2021 9:47 pm : link
Appreciate it!
Obstructed View seats
Chocco : 6/8/2021 10:27 pm : link
Almost all the grandstand seats ( lower level behind field box) have some sort of obstructed view due to the poles. Some are really obstructed (I once sat directly behind a pole) and some you may just miss a small section of the field and is really no big deal. The link below lays it out pretty well
Fenway views - ( New Window )
Always go to any MLB park…
trueblueinpw : 6/8/2021 11:23 pm : link
Yeah, the seats were made for leprechauns. And of course B’ahstan fans fucking blow each other’s ass and there’s a wicked ton of ‘em at that dump.

But, seriously, it’s a classic MLB park and you’ll have a great time.
Walk to the park from back bay
Reale01 : 6/9/2021 12:24 am : link
Get there early so you can take time to enjoy the atmosphere outside the stadium. Smell the sausages and peppers and listen to the vendors accents as they hawk their wares, "Getcha Sawx caps heya."

Stay until the end. Take me out to the ballgame for the stretch, Sweet Caroline in the middle of the 8th, and Muddy Water and Tess if they win.

I personally don't like the roof seats, more energy in the bowl, and you can't see The Monsta from some of the bleacher seats. Pretty safe park, Fans are passionate but generally well behaved for all but Yankee games.
RE: I have never walked into that ballpark.
Eman11 : 6/9/2021 8:08 am : link
In comment 15282634 Giant John said:


I’ve always had the same take until I saw Springsteen there several years ago. We were in the GA Pit on the field in Center Field and entered through the bleachers and over ramps setup over the bullpens. I could picture Mariano warming up in that rickety old thing, and even took a stroll up to the seat in the outfield where Ted Williams jacked a monster blast.

We got there early and walked out to a great view looking at home plate, and strolled around the outfield from the Green monster to the Pesky pole. They had the infield roped off but was able to get just about to the infield grass and just look around and take it all in.

I hate the Sox with a passion but that ballpark and its history was a really cool thing to experience and taking in a ballgame there has been on my bucket list ever since.
RE: I have never walked into that ballpark.
Heisenberg : 6/9/2021 9:14 am : link
In comment 15282634 Giant John said:


I'll never understand this position. I've gone to see the Yanks play there a LOT. It's great.

In 1998, I went to a Yanks game there and got to see David Cone outduel Pedro for 7 innings. Tremendous.

Around the 6th inning or so, a dude who was listening on the radio stood up, turned around and yelled "62 HOME RUNS!" because McGwire had just broken the record. The stadium went nuts, totally confusing Chuck Knoblauch during his at bat. They then showed his homer on the jumbotron.

In the end, Mo came in for a 5 out save and ALMOST blew the lead in the ninth. Sox fans were hyped, thinking he might choke. When he locked it down, the stadium went completely silent and I'll never forget how awesome that moment was. Great game. My favorite Yankee game I've been to.

Grandstand Infield section 15, row 12. It's not obstructed view according to Vividseats.com. 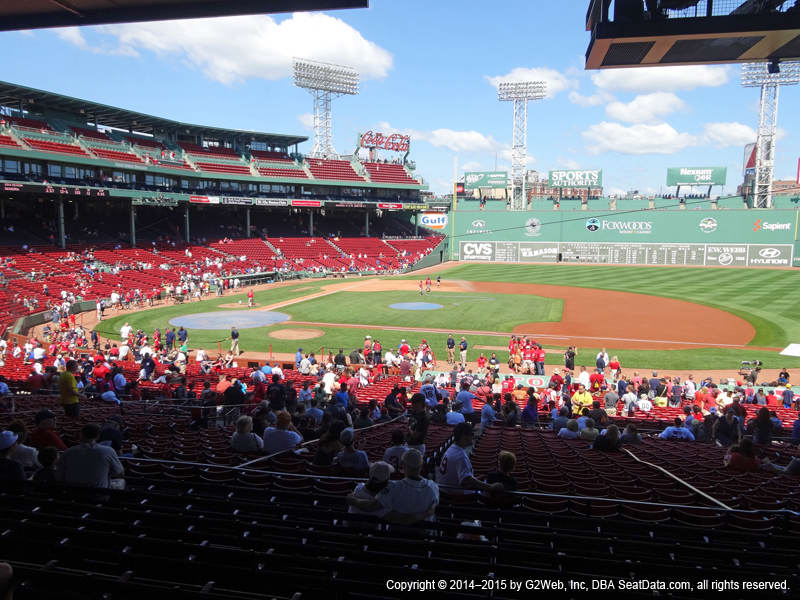 Dr D, it's a decent spot, it's good to see plays off the Monster
schabadoo : 6/9/2021 12:20 pm : link
I always sit on that side.
Lived in Boston in 90's
PatersonPlank : 6/9/2021 1:55 pm : link
Went out to many bars and clubs around Fenway. When I first got there I really didn't know where Fenway was. We were waiting in line to get into a nightclub, and I looked up and saw the foul pole nets to keep the baseballs in. I thought I was standing in front of an old warehouse, it looks just like that from the outside and its built right into the area.

Used to go see all the games when the Yankees were in town. Sat in the bleachers and had a great time. Would drink at Copperfields or The Cask before
RE: Dr D, it's a decent spot, it's good to see plays off the Monster
Heisenberg : 6/9/2021 1:57 pm : link
In comment 15283143 schabadoo said:

The upper grandstand seats have 'poles' or pillars in the way. So you could wind up with obstructed view seats.
Also, keep away from sections 1-5 down the right field line, around the Pesky Pole. The seats are actually pointed
more towards the rightfielder and not towards the plate!
I have probably been there about 75 times in my lifetime.
What can I say, I live in Mass., but not in recent years.


I'd like to see that.
My son and I went to Mets-Saux a couple season ago.
Beezer : 6/10/2021 4:42 pm : link
Sat in the outfield. We were fortunate enough to have a friend who knows someone in the PR department set us up with pre-game on-field access. Met a few of the Mets (Jerry Blevins, Seth Lugo and Steve Gelbs! Ha! All 3 good dudes). Watched BP up close ... we were among the last 10-12 fans to leave the field. Took it all in.