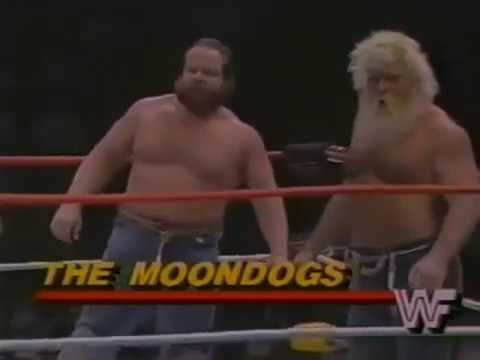 
Big Al, I will put my Jobbers against yours any day of the week.

Darsow and Eadie were terrific workers as singles or as a team, but there's no way they had the impact the Road Warriors had. There's a reason the Road Warriors are the only team to hold the belts in the AWA, NWA, and WWE. They were that good.
My Four
BigBlue2007 : 6/10/2021 2:48 pm : link
1. Harlem Heat
2. Hart Foundation
3. Strike Force
4. Demolition

this is tough
Platos : 6/10/2021 2:57 pm : link
Road Warriors/Legion of Doom has to be on there, too iconic even though they no sold everything and were just big meatheads.

The Steiner Bros, both great entertainers. rick wasn't a talker but i always liked his style. Scott was a machine and an innovator.

after that idk, too many teams have come and gone.

Overall, I think the best tag matches out there
Matt M. : 6/10/2021 2:58 pm : link
were the battles between the Bulldogs and Hart Foundation. Great combinations on both sides of brute strength and tactician/athleticism.
umm
Rory : 6/10/2021 2:59 pm : link
brothers of destruction ..


its crazy how that works. Jessie James/Brad Armstrong had so much charisma on the mic. hardly any athletic ability like his WHOLE ENTIRE FAMILY.


I always loved how Mean Gene and Gorilla Monsoon would refer to Bret Hart's "Excellence of execution", and attribute it to growing up in the basement of Stu Hart.

I never knew until years later watching wrestling docs on youtube that wasn't kayfabe, Stu Hart's "dungeon" was a legendary training ground for his family and several other wrestlers.

Also didn't know as a kid that Bret is related through marriage to both Davey Boy Smith and the Dynamite Kid.

I grew up with Tony's kids so that tag team has to be there on my mount rushmore, plus he's old school WWF and I was the Samoans paper boy - so they belong as well.


Tony Garea was one of my favorite wrestlers when I was a kid. I remember when he and Dean Ho beat Fuji & Tanaka for the WWWWF Tag Team Title, his first belt. In the pantheon of pro wrestling "workers," he's right up there with the best of them.
The Rockers
bradshaw44 : 6/10/2021 3:29 pm : link
All day long. By far my favorite.
The Headbangers were an underrated team
moespree : 6/10/2021 3:29 pm : link
I know Cornette loved them and tried to get Vince to push them, but Vince never got the whole metal gimmick. Which is ironic since he's the one who signed off on it. Typical.
I'm trying to keep stables out but going with Freebird's rule
Larry from WV : 6/10/2021 3:30 pm : link
Teams of 3, or less, who focused on tag teams work.


My favorite wrestling quote of all time is from the Powers of Pain.

There’s a lot of good tag wrestling in NXT.

I hate the Young Bucks.
60's through the 90's
arniefez : 6/11/2021 10:17 am : link
when there was still some shadow of a doubt what was real and what wasn't - not that it wasn't predetermined finishes - my opinion would be based on who were main event box office guys memorable wrestlers