Giants vs Saints 2015 (Summers are for nostalgia)

52-49 final score. 3rd highest total score of all time at that point.

One of the most fun Giants regular season games to watch in recent memory.

Highlights. Lowlights. Either way was a fun game.

Such a typical Giants ending.


Indeed he did. Of course, so did Snead, but the refs of course didn't notice that. 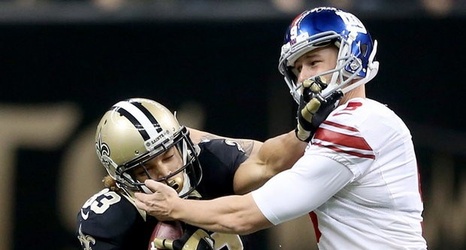 Hated it. ZERO defense. It infuriated me so much I turned it off and went for a walk in the 4th Q.
Enjoyable?
djm : 7/20/2021 7:20 pm : link
I broke something that day. Strictly an involuntary reaction.

That 2015 team should have gone to the playoffs. The D just had to be kinda bad and they’d make it. Instead it was god awful. Eli was really good that season. He had one wr worth anything. No OL. No running game really. And the worst d in the NFL. Still put up over 400 pts.
djm...
SFGFNCGiantsFan : 7/20/2021 7:23 pm : link
It's insane how many games that team pissed away in '15. The ones that come to mind: the opener in Dallas, Week 2 vs. ATL, the Saints game, the Pats game (where Collins had the game ending INT in his hands & couldn't come down with it), & the Jets game. I'm sure I'm forgetting others.

2015...that was 'Bartender, please bring out a funnel' type of season.
That was the most fun loss I've been to.
BigBlue in Keys : 7/20/2021 7:59 pm : link
One of our absolute best losses in this last decade of some bad losses. The New Orleans crowd, and the fans around us were such a blast. Especially with both teams scoring like a basketball game it was an emotional rollercoaster. Got to watch Eli throw for 6TD's, his career high so that was cool.

The penalty and FG was heart breaking in the moment. The penalty felt like such bullshit and the home town fans agreed but they weren't giving the win back. Also what made it worse was NO fumbled that punt. So for a second it looked like we were getting the ball back ourselves, then we didn't, then the penalty, F$#@! The way our defense was playing there's a good chance they would have gotten into FG range even without the penalty. One of those games where the team with the ball last was going to take it.


Yeah. Imagine that you're told before a game your QB will throw for 6 touchdowns and he'll lose the game.


The week one loss against Dallas was on Coughlin and was the pt I began to believe it was time to move on. Horrible loss that set the tone for that season.
I've seen a lot of putrid losses, we all have.
BigBlue in Keys : 7/20/2021 8:43 pm : link
Not like this was SF '03 or anything. I used to be like you. Being upset over a loss, carrying the hurt all week, being cranky to the people around me - that doesn't change the score, doesn't help win next week, doesn't make you a better fan. Just robs you of your happiness.

Gotta see a silver lining sometime, accentuate the positive ya know? Enjoy the good times and shrug off the bad, life's short man. Had a great time in one of the best cities on earth all weekend with great friends, one no longer with us. I've always loved defense too, but watching your team score 7 td's is a thrill. Sure it sucks the other team did too, plus a FG. It's sports your not going to win them all, or most, but when you finally get to that big one and do win it it makes it all worth it. So until then enjoy the ride!
......
Route 9 : 7/20/2021 8:59 pm : link
OMG. That week 1 in 2015 vs Dallas pissed me off. Fucking idiotic.

Brutal. I’m as a big a Coughlin fan as there is but just about any coach would deserve to be fired coming off that season.

For my fellow Giants/Mets fans, Harvey tossed the game 5 WS loss just hours later. Great times!
......
Route 9 : 7/20/2021 9:27 pm : link
Holy shit. I forgot about that World Series. If you were to ask me minutes before your comment "when was the last time the Mets were in the World Series?"

I would've answered with "2000 vs the Yankees" because I never thought of that series since the night it ended.
Geez I had put that debacle out of my memory!
Stu11 : 7/21/2021 8:24 am : link
I was in my late 40's going to grad school then and working full time with a family it was a brutal grind. Class weekends a few times a month were 6-9pm fridays, 9-6 sat and 9-3 sundays after a full work week. I literally would count the seconds till I got home Sundays to relax and watch the rest of a football Sunday. It was my escape. Some escape that season was! I was so pissed at the end of that game I tossed a textbook and ripped the cover. The kids really ride me for my game tirades, that was a legendary one. Oh and you kumbaya zen masters that don't take losses tough any more and love to post about it- go F yourself.
RE: Geez I had put that debacle out of my memory!
Victor in CT : 7/21/2021 9:39 am : link
In comment 15309297 Stu11 said:


Yep and if you think about it, 2015 was one of if not the most damaging NYG seasons I can ever recall. Think about the fallout from that season. NOTHING good came of it, only pain in the moment, and pain to come. Eli had a good year so naturally the front office was going to stick with McAdoo. They lost games in brutal fashion so they also felt compelled to fire Coughlin. And since the games were so close, the Giants felt that Coughlin was the problem and not Reese. What they missed was Coughlin likely got every shred of game out of that roster and Reese and his team building plan was in fact the bigger issue.

So not only did that season kick us all in the nuts time and time again. It led to 2017.

I still think we would have been so much better off keeping both Coughlin and even Reese (to be fair) and letting them go at it one more time, in bed together, for the 16 season. If they win in 16 fine, you get 2017. I promise you, that 17 season never goes the way it went if Coughlin is still here. And I have a hard time believing the Giants won't win 10-11-12 games in 2016 IF Coughlin is the HC.


Was it? I distinctly remember Eli doing something really dumb in the dallas red zone with minutes left.

Ill die on this hill. Coughlin got every ounce out of that 2015 team. That team had NOTHING other than Eli and Beckham.
and I understand
djm : 7/21/2021 11:58 am : link
you can find many gaffs or questionable moves throughout that season, but Coughlin knew damn well that team couldn't stop anyone. He game planned aggressively because he had to.

I always thought it was awfully convenient to blame Coughlin every week when the Giants would play aggressively and still lose, yet they were scoring points every week. And I think ageism was at play from just about everyone. He wasn't too old. He was coaching a terrible team. And we saw that all come to fruition the next few years save for the blip in 2016 where the D finally came together for a minute.

Coughlin might have been losing his fastball and some of his decisions were open to scrutiny, fine i'll allow that, but we'd still have been better off keeping him and letting things go organically. I think 2016 could have been very interesting if Coughlin is coaching that offense. They ain't scoring sub 300 pts that's for damn sure.
RE: RE: djm...
Victor in CT : 7/21/2021 12:12 pm : link
In comment 15309444 djm said: