The Avalanche and captain Gabriel Landeskog come to terms on an eight-year, $56 million contract extension.

Pierre LeBrun
@PierreVLeBrun
·
1h
All signs point to UFA G Jonathan Bernier signing with New Jersey today.
As we reported before, UFA G Jaroslav Halak should be signing with Vancouver.
I wonder if UFA G James Reimer ends up in SJ or Vegas?
Still lots to play out with goalies.

Oilers News and Updates
@oilersaccess
· 18m
Elliotte Friedman on 630CHED says he wouldn't be surprised if Darnell Nurse's extension comes in around $9M given the contracts the defenseman has signed recently.
Tatar likely
pjcas18 : 7/30/2021 4:13 pm : link
gone from MTL - multiple teams in on him - decision soon.,

Randy Timmins
@The_Creasy
·
7h
Apparently after a full day of back and forth yesterday between Montreal and Buffalo, Habs have upped their offer for Eichel and are waiting for a clear medical report. A few teams have dropped out of the sweepstakes, notably, Minnesota. Few teams remain. #GoHabsGo
my guess on Canadiens offer
pjcas18 : 7/30/2021 4:14 pm : link
is Kotkaniemi, Romanov and a 1st. 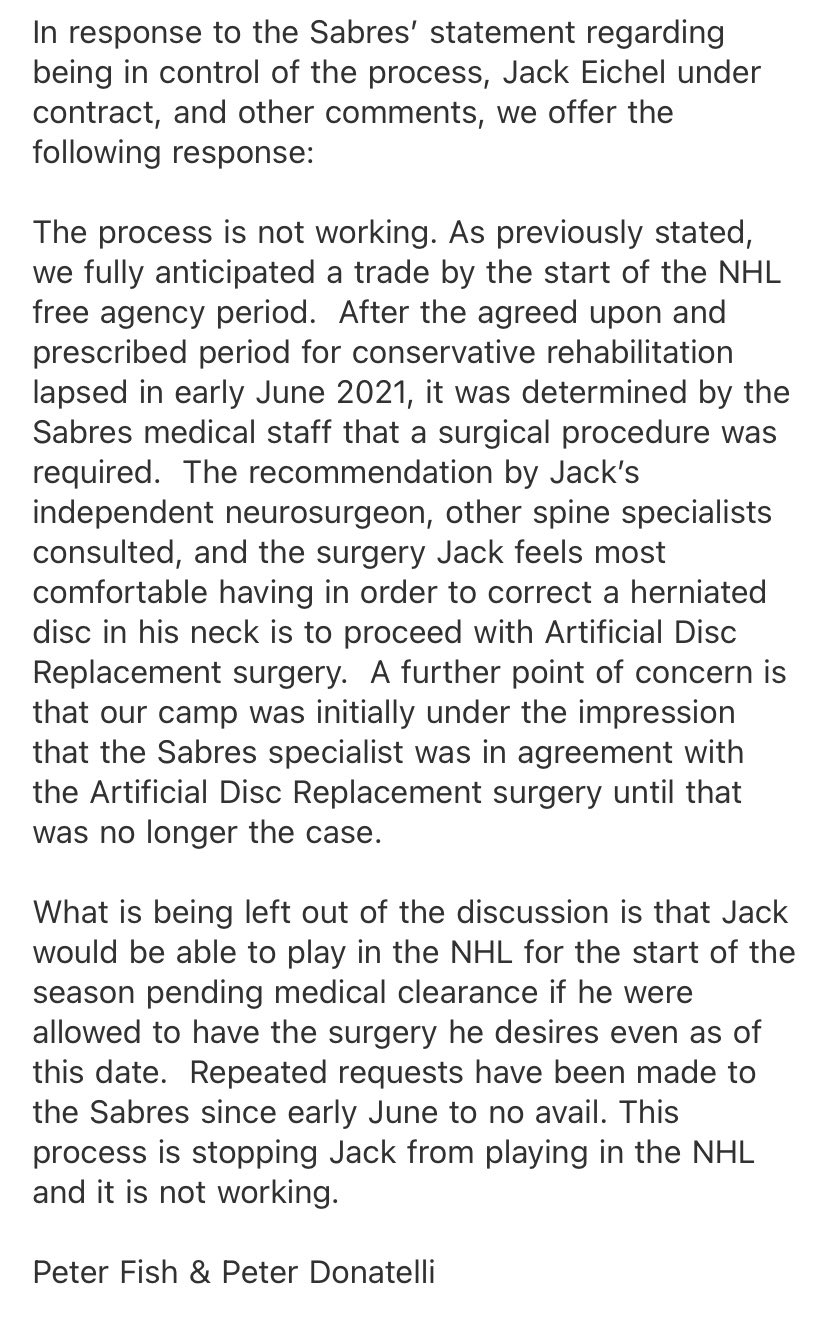 
Where's Kevyn "Baghdad Bob" Adams when you need him?

LOL, a 10M per year diva with a bad neck and the Sabres think they can dictate terms? I'm not even trading Chytil or Kravtsov for Eichel, let alone Kakko, Lundkvist or Schneider. They can go fuck right off. They'll take what they can get for their damaged goods and just be happy that they'll be off the hook for his 10M per and be free of the distraction.
The Sabres are such a shitshow
Jay on the Island : 8/1/2021 10:13 am : link
I actually feel bad for their fans.
I have a feeling
5BowlsSoon : 8/1/2021 10:20 am : link
Mark Bergeron on the Habs Will trade for Eichel. I think he thinks he now is going to have to go further with this team and win the Cup. He may think Eichel is the missing piece.

Personally, I think this will be a big mistake because I’m sure Habs will lose some very top players like Romanov, Kotkaniemi , maybe not Suzuki, and give up a #1……all for a guy who may now be damaged goods.

and if it costs Kotkaniemi, Caufield, Suzuki or Romanov I wouldn't be happy.

I'd deal Poehling who seems to be a forgotten man in MTL. But that doesn't get close and he's coming off his own injury (wrist, so nothing like Eichel), but still.

Not sure if anyone is following it.

divorce brings out the worst in people (and I'm not guessing who is being more honest in this story - I have seen it with close friends too, divorce just makes people vicious)
RE: Not free agency
PwndPapi : 8/1/2021 1:08 pm : link
In comment 15318923 pjcas18 said:


Tough to ay what's true or not. NHL investigators should be able to find out quite easily. Whether they publicly announce the findings is another thing. If true, he should be banned from the NHL. If not, this is likely to work against her in divorce proceedings.


Remember Michael Strahan’s divorce that was fodder for the Post and other tabloids? His ex said he was gay and that he taped her sister changing in their home.

(In unrelated news, Strahan’s ex was recently arrested for stalking a woman she had previously been in a relationship with.)
RFAs
pjcas18 : 8/1/2021 7:09 pm : link
filed for arbitration 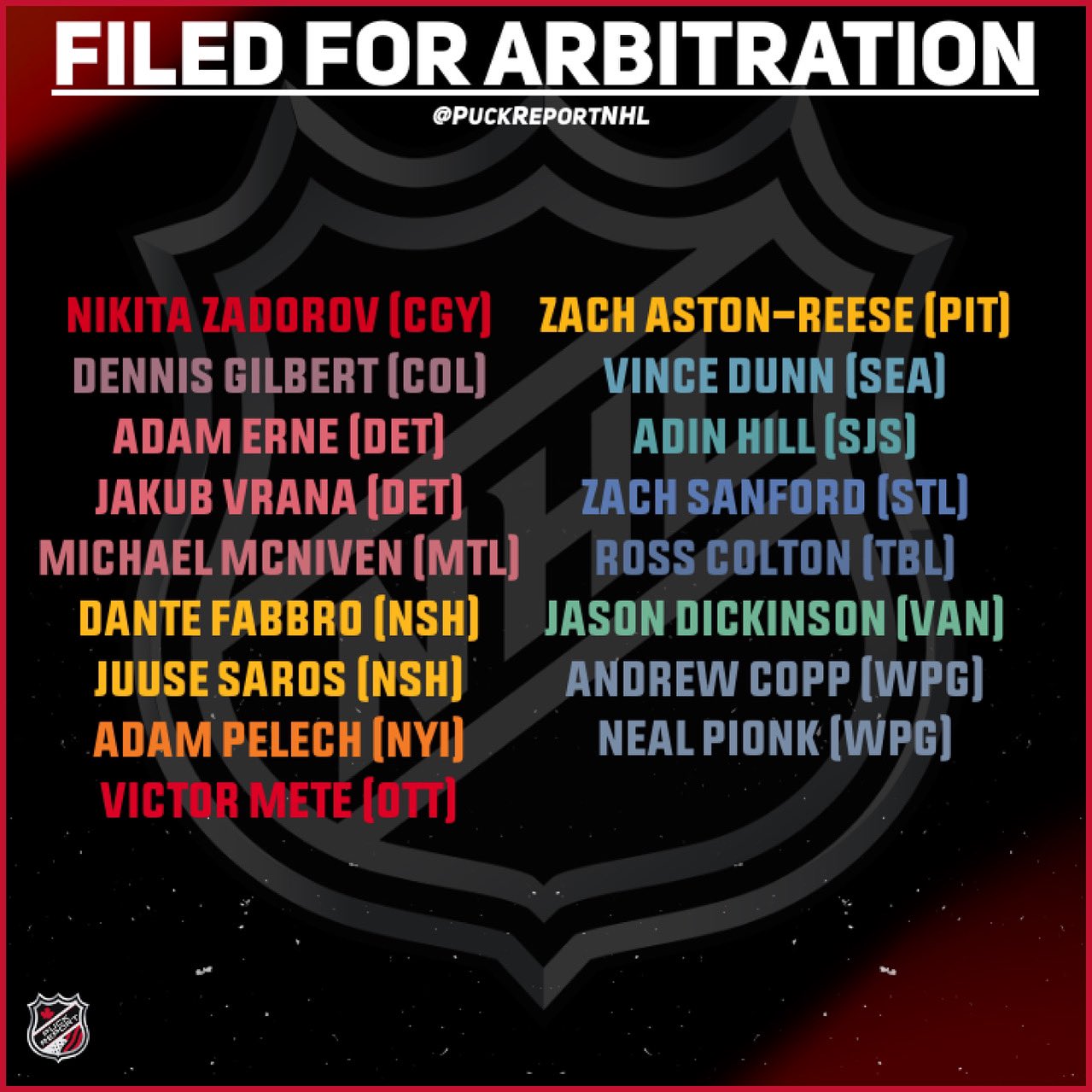 Last year was canceled due to COVID.

It's a U18 tournament, so no one who's been drafted.

US has Mike Knuble's son and a couple other players.

Matvei Michkov from Russia is *the* player to watch. He's amazing.

Very solid move plus they are still trying to land Tarasenko. Ths Devils also signed Sharangovich to a 2 year $4 million dollar contract. They have plenty of cap room left.
The Devils are having an excellent offseason
Jay on the Island : 8/5/2021 3:36 pm : link
While maintaining future cap space needed to extend their young core players Hughes, Smith, Blackwood, Zacha, Bratt, and Sharangovich.
If they can keep their key players healthy
Jay on the Island : 8/5/2021 3:40 pm : link
I think he Devils have a great shot at securing the 7th or 8th seed especially if they land Tarasenko. Their depth was abysmal last season but this year they will have Foote, Holtz, Clarke, Mercer, Walsh, Okhotiuk, Vukojevic, and Bahl in the AHL.

I’m assuming Tatar will start on a line with Hughes and Sharangovich knocking Kuokkanen down to the 3rd line.
…
Jay on the Island : 8/5/2021 6:35 pm : link
Tomas Tatar, signed 2x$4.5M by NJ, has simply been one of the league's most effective 5v5 offence creators in the past three seasons. This is a major discount considering his recent body of work. #NJDevils pic.twitter.com/DxapHkdzZV

That is one of the best deals of the offseason. Great move by Lou.
Chytil?
ColHowPepper : 8/7/2021 2:28 pm : link
Ryan Mead @OhRyanMead notes that Chytil does not appear on NYR roster online, which may signify something or nothing at all, with one tweet saying he has not been listed in the online roster for weeks, which can't be verified.