Don’t worry about Daniel Jones. Yet.

Marty in Albany : 8/2/2021 9:33 pm
If you are worried because Jones has not completed a lot of passes in training camp, I would not worry. He has not had problems completing passes in the past.

His problem has been turnovers. Interceptions and fumbles. Hopefully this problem has been addressed by improving his offensive line and by adding some pretty good receivers. If the interceptions and fumbles continue, then it will be time for us to worry.
Pages: 1 2 3 4 5 6 7 8 <<Prev | Show All |
What victory laps
UConn4523 : 8/5/2021 4:49 pm : link
?
RE: I'm optimistic absolutely
Brown_Hornet : 8/5/2021 4:58 pm : link
In comment 15323748 NoGainDayne said:
I'm enjoying the offseason.
I'm even warming up to DG...partly because he's made what appears to be multiple positive moves in the past 2 offseasons. He is also working well with JJ.

I will admit, I'm also beginning to like him because it tweeks the miserable lot that can't go a week without denigrating him.

This has been a great offseason for the Giants. You stated that the Giants need to win the Super Bowl in order to not be the laughing stock of the league...
...I don't know how you manage to fit that much hyperbole in the room but as I have said...


NGD - you are kind of all over the board on this now.

After going thru a few soliloquies earlier and concerning yourself about Browns fans ridiculing your team, you are now stating you are as optimistic as ever. If its truly the latter then good...you're all set to watch the season.

And coming from the biggest DG critic on this board, I seldom see anyone seriously taking victory laps. They would be doing it to goad a reaction if so and only wind up looking foolish. Plenty of DG defenders mind you, but very few brave enough to take laps. Most have converted to Judge advocates anyway because confidence in that GM, by himself, smartly fell out of favor.
I'm optimistic about them not being terrible
NoGainDayne : 8/5/2021 5:20 pm : link
doesn't mean I think they have the right people in charge, especially outside of Judge.

And am not feeling great about Jones or what a commitment to Jones could do for the overall success of the team.

As for Brown Hornet and DG, they've been the worst team in the league since he's been hired. The Giants have had a total of 37 wins in 8 seasons since the Super Bowl victory or about 4.6 a year. You aren't witnessing any discomfort with DG it's his performance that makes many squirm.


Wait so does that mean Yankees fans can't be critical of the team ever because they've won 27 championships?

Past success doesn't excuse current failure
Yankees threads are also a disaster
UConn4523 : 8/5/2021 5:31 pm : link
thanks for pointing that out. If you didn't follow the MLB and just glanced at a thread you'd think they are 20 games under .500
Nobody is feeling 'great' about Jones
Jimmy Googs : 8/5/2021 5:31 pm : link
but if he isn't the guy then you won't have to concern yourself with Gettleman anyway. Nobody will ever let him pick another QB.


Lol well I don't often participate in the Yankees threads here, yeah I've seen that before. The first half of the year the criticism has certainly been warranted though.
RE: Nobody is feeling 'great' about Jones
NoGainDayne : 8/5/2021 5:46 pm : link
In comment 15323796 Jimmy Googs said:

Possible
Jimmy Googs : 8/5/2021 5:55 pm : link
but not plausible
The fact that DG still has a job is a minor miracle
NoGainDayne : 8/5/2021 5:58 pm : link
and despite that horrible record Mara showed little to no interest in talking about him being on a leash. If anything he showed more interest last season.
Scooter..
FatMan in Charlotte : 8/5/2021 6:19 pm : link
you are missing my point about the success:

It isn't about being critical. It is the act that the team is an abject failure and that there's been no tangible record of success. If somebody says the Yankees are the worst franchise in the MLB and are getting laughed at by Pirate fans and acts like the team is dogshit year in and out, they should get ridiculed, especially if their tone is that the team will never get better with the people in charge.

Again - taking a snapshot of any franchise in any sport at their lowest point or during a dry stretch is going to look really bad., yet people still remain fans.

The folly is thinking that if the Yankees do poorly that I can post on a message board ripping Cashman and ownership and thinking they have a mandate to act upon my bitching. That if there is positive comments about a young pitcher, that they are being said just to protect a fragile psyche. That, as a fan, I need a plan.


I hope you're right. Even so, the team is still constructed around Jones and Barkley, both of whom were drafted under the Gettleman methodology (whatever that is).

I want Judge and his people to bring in a quarterback using their scouting and evaluation methodologies, which I would trust a great deal more than Gettleman's.
RE: RE: With our OL
christian : 8/5/2021 7:11 pm : link
In comment 15323852 crick n NC said:


All fine and good. But if it's Abrams next that would signal that it's going to be more similar to DG than not IMO.


Imagine the Yankees of the late 80s and early 90s, especially after a Mets title, with social media.

I understand that what's posted here, on Twitter, etc means nothing at the end of the day. Doesn't mean I can't be upset with how the team has played, been constructed, and run even though I've seen more titles than some teams combined
RE: RE: I think all this talk about DG is moot
BigBlueShock : 8/5/2021 7:38 pm : link
In comment 15323883 NoGainDayne said:

This is such BS. You don’t know the first thing about how Abrams would conduct business. Abrams and DG have nothing in common other than they are in the organization. Which I realize is your hang up. If he’s part of this organization in any capacity he’s part of the problem. Got it.

Abrams is a cap guy. It doesn’t take a super genius to figure out that if he were to take over, it’s with the idea the coaching staff would have a ton of input into roster construction. Well, they already do, but that would go against your narrative that DG is the devil. I’m not a fan of Gettleman. Would prefer someone else. But that dude never stood a chance here from the time he was hired because he’s not a computer geek. Let’s not act like you want him fired because of the performance. You wanted him fired the second he walked through the door. Because he doesn’t look and sound like you. That is a fact.
RE: RE: I think all this talk about DG is moot
Mike in NY : 8/5/2021 7:39 pm : link
In comment 15323868 Go Terps said:

Haha. This is great. You simply cannot make this shit up.
My problem with Abrams and DG are the same
NoGainDayne : 8/5/2021 8:02 pm : link
they move forward a power structure and overall mode of thinking that has proven to be quite ineffective over a long period of time. That's the common thread. If Abrams or anyone was so very good at their jobs how could the Giants have been this bad? Nothing about the way they handle the cap or trades, my understanding of his oversight stands out one bit.

As for this gem of a quote

Couldn't miss me by more. I actually value leadership above all else. Good leaders are accountable, they are open minded, they want to soak in new ideas and never miss any potential edge.

DG graded quite poorly in my book because of the way he discussed ideas and the structure of the organization around and below him. Yes, the way he acted and spoke, I rated it highly likely that the Giants would continue to lag behind on innovation, I spoke out about that and it wasn't the hardest prediction to make. It's good to understand all the potential innovations, explore them, hire the right team to put you in a place where you can get ahead. I don't want a "geek" I want someone who unlike DG has a curiosity for what he doesn't know, instead of acting like he has all the answers. That pompous fake keyboarding was everything that is wrong with him.
Very..
FatMan in Charlotte : 8/5/2021 8:04 pm : link
odd to have confidence in Judge drop if he thinks that Jones is the right QB, but no reaction to Judge going into a season where several weapons were added with a QB he shouldn't want.

If I was going to ding Judge for keeping Jones past this year (without even knowing how the fuck Jones does this year), I'd absolutely rip Judge for going into a year on a QB he doesn't believe in.


Why do I picture this guy? Just a fucking joke at this point. A meme 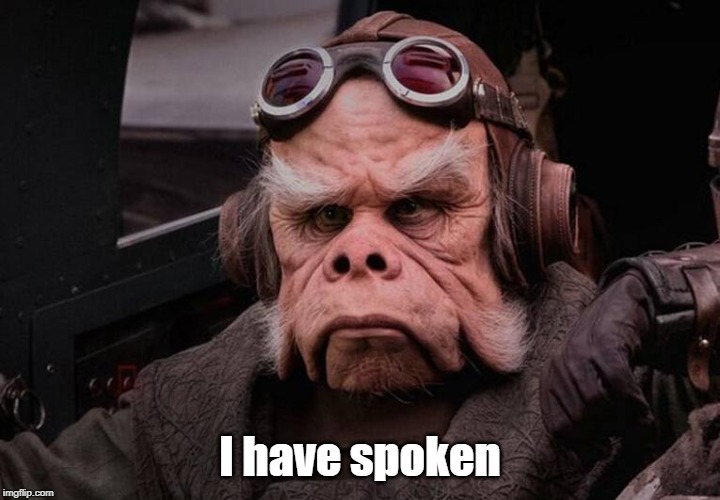 Well, that’s that! Google search “stats” has spoken! Evaluation complete. No need to see any more! Judge is an idiot. Its obvious to any nerd that’s gone to Pro Football Reference to evaluate players. I’ve lost confidence in Judge. Because posters that have probably never even put their hand on a football, let alone play the game at any level, make evaluations on Google.


Of course Scooter is right.

But I meant further up with the nice pic and comment. Here’s your chance...
It looks like
crick n NC : 8/5/2021 9:53 pm : link
A planet of the Apes picture from what I can tell, hopefully the movie signed off on posting that picture here.
Well then things are still accurate but not celebrated.
Jimmy Googs : 8/5/2021 10:07 pm : link
Maybe another opportunity will avail itself...
Yes
crick n NC : 8/5/2021 10:17 pm : link
I treat you differently than other posters. We had already established that.
And..
FatMan in Charlotte : 8/5/2021 10:22 pm : link
you wonder why people call you out for trying to start shit and not knowing how to present any analyses.

That was a great post Doc. I couldn’t have said it better myself.
No one will know what JJ thinks of Jones.
Ten Ton Hammer : 8/6/2021 7:47 am : link
It's the QB he inherited while accepting one of the 32 most coveted jobs in sports.

What he says in public is moot. He would not be doing his job if he wasn't saying all the right things to support him and cultivate his success. He might be wild about the guy. He might simply think Jones is the best QB option available right now.
Yes...
Brown_Hornet : 8/6/2021 9:03 am : link
...coaches toe the line...but let's not get all Q about it and allow ourselves to assume that leadership is automatically all bad simply because it is possible that they might soften a stance out of support for the team.
year 2 or 3? - ( New Window )
RE: …
santacruzom : 8/6/2021 1:37 pm : link
In comment 15322416 christian said:


Googs, I have reflected upon your point and admit that it is a valid point. When it comes to other people's behavior I should just keep quiet. It is not like I do not have many things to work on with myself.