Some All-22 on Jones


Thought the throw to Rudolph was worse....he's one on one - isolated - but totally overthrows the big TE.
I think the issue
crick n NC : 9/13/2021 5:28 pm : link
With the Golladay throw is mostly because he was late. Since he was late the throw became much more difficult.
That last play was extremely well defended
Zeke's Alibi : 9/13/2021 5:28 pm : link
There wasn't anything there I'm not sure what that dude is talking about. Maaaaybe you can hit the slant, but throwing it directly into double coverage. "Anticipation" there probably results in an int. Sometimes the defense wins. I'm much more concerned that Garrett can't call anything inside the 5 that doesn't result in these extremely difficult plays to make.
To my uneducated eye
crick n NC : 9/13/2021 5:29 pm : link
Jones plays nervous.
RE: That last play was extremely well defended
ajr2456 : 9/13/2021 5:33 pm : link
In comment 15365195 Zeke's Alibi said:


Lol jeeze man. Never a fault in Jones huh. That play only became well defended because he was late. If he throws that as Golladay is coming out of break towards his outside shoulder the corner isn’t making a play on it.
RE: The last throw is very informative
bluewave : 9/13/2021 5:34 pm : link
In comment 15365184 Go Terps said:


Look at the routes. Everyone breaks on some type of curl or stick route. That means Jones would have to read ALL OF THEM AT THE SAME TIME, make a decision, and then throw. They need more crossing and drag routes.
RE: RE: The last throw is very informative
ajr2456 : 9/13/2021 5:35 pm : link
In comment 15365201 bluewave said:


1) that’s not how it works
2) he’s a quarterback in the NFL not high school.
Great video
Thunderstruck27 : 9/13/2021 5:35 pm : link
The analysis is right on. Did some great stuff and did some bad stuff. I still think we lose if he doesn't fumble. Tough to blame anyone for the Rudolph play considering how little the TE was on the practice field. Throw was late to Golladay...you gotta give him a chance to make a play there.
It was 4th
crick n NC : 9/13/2021 5:37 pm : link
Down. Find your playmaker and use him whether directly or indirectly. On Golladay's side a defender was waiting on the slant, so have confidence in Golladay and throw with anticipation.
RE: RE: That last play was extremely well defended
Zeke's Alibi : 9/13/2021 5:37 pm : link
In comment 15365197 ajr2456 said:


The corner has total outside leverage, there isn't anything there. We need to be more creative in the redzone because Garrett is making it impossible for the QB.

That wastes valuable time, especially in the redzone where this is less space to get open, and defenders can close quickly.
RE: RE: RE: That last play was extremely well defended
Jimmy Googs : 9/13/2021 5:40 pm : link
In comment 15365209 Zeke's Alibi said:


That play is designed for the throw to go to Golladay right out of his break. Pause the video at 8:00 exactly. The throw should have went to his outside shoulder right then. You’re completely wrong on this.
Look where the damn corner is sitting on the route
Zeke's Alibi : 9/13/2021 5:45 pm : link
If he throws with "anticipation" there its just as likely its picked to the house than it is a TD. And then youd bitch about how he couldnt see it. It's all so damn predictable at this point. He doesn't have the benefit of hindsight to see the corner get caught flat footed. Instead he waited for him to break to the corner and hopefully get a jump ball situation, but the corner showed great recovery ability.

The Rudolph play was almost certainly on Jones, but it's absolute bullshit to point out what develops after the fact when you need to make decisions in real time.
RE: That last play was extremely well defended
Football Giants : 9/13/2021 5:47 pm : link
In comment 15365195 Zeke's Alibi said:


You’re completely wrong. The play is designed for anticipation, that’s the only way the rub works. The corner isn’t making a play if he throws it in the right spot. Instead he throws a shitty jump ball a second late with the defender draped all over Golladay.


This is not accurate. Golladay established himself between the corner and Jones. If the ball is on time it is then a matter of what Golladay was signed to do - catch the ball in contested situations. That's a key point here - Golladay isn't a guy that gets separation. He's a guy that catches the ball in traffic.

This is the NFL. That's got to be a touchdown.
As a rookie Jones had 13 tds and 0 ints in the RZ
Eric on Li : 9/13/2021 6:04 pm : link
this offensive scheme is broken and unless there are major changes implemented by Judge the season is going down the tubes. If this offensive scheme remained I feel confident in saying it would serve whichever QB cycles in next poorly too.

Cycling Garrett out for someone else may make things better, like it did in Dallas, so I'd try that first.

btw the 4th and 6 was one of Jason Garrett's signature sticks routes. And not only that he got the play in so late it should have been a delay of game. The Bronco's DBs were literally in shell waiting to break on the ball around the goaline. It's hard to see in the 2nd screenshot because it's low res but the Bronco defenders hardly had to move and there were 2 of them breaking in on each NYG target regardless of where the throw went.

Link to the clip is below too. 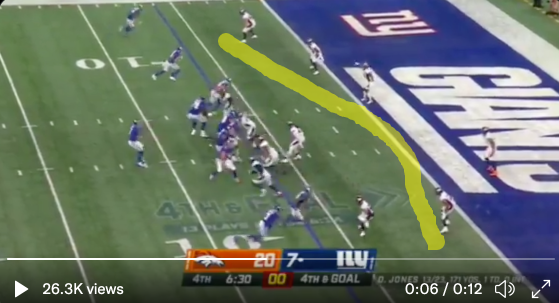 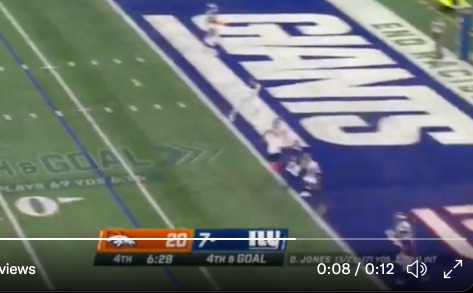 
BINGO ... something bad happened to his confidence when Shurmur left and JG came in ... I noticed it in his eyes last year. He just doesn’t look comfortable.
Why wasn't Jones used in the preseason games?
Fishmanjim57 : 9/13/2021 7:00 pm : link
The coaching staff are putting too much trust in this guy. He shouldn't be given the keys to the car if he keeps dropping them.
I am not a fan of Daniel Jones.
Not only did Gettleman screw the pooch when it came to the OL, but Gettleman drafted Jones.
The Giants should still be in the market for a starting QB.
Thank you for sharing
gmen4ever : 9/13/2021 7:11 pm : link
I really enjoyed the perspective
...
SFGFNCGiantsFan : 9/13/2021 7:12 pm : link
Jones looked like a different QB under Shurmur than he has with Garrett.
RE: RE: Watching that
joeinpa : 9/13/2021 7:19 pm : link
In comment 15365266 Jimmy Googs said:


There are plays where he demonstrates the skills to be special . Some of his throws are as good as it gets. He is a weapon with his legs

His problem continues to be inconsistency. Are we absolutely certain he won’t continue to develop to the point where his outstanding plays become the norm?

He has great potential. Maybe I should have stated, “I see why the Giants are hopeful maybe even optimistic he becomes the guy”


I don't know if he isn't the guy yet either.

But inconsistency is not his problem in my view. He hasn't shown enough highs yet to go with the fairly consistent lows to be labeled inconsistent. 3 really good games 2 years ago against 3 bad defenses doesn't qualify.

He didn't help his cause yesterday though, and he's got to start doing that...

We have a full season
ryanmkeane : 9/13/2021 7:31 pm : link
to see if Jones is the guy. It should be pretty apparent halfway through the season if that’s the case or not.
4 down territory
Giants73 : 9/13/2021 7:36 pm : link
Correct play on Rudulphs is to waste it and not throw a pick have the next down. Can’t argue that he is being too aggressive and fumbles and then Argue that he has to be more aggressive and try and make a throw that’s not there. KG route is a horrible play design. 5 yards from the sideline and cross the WRs. By the time the underneath CB turns his shoulders there is no room at front pylon. The route needs to be a back corner fade. Really with KG and that close they should have ISO’d him two plays in a row. That’s why you pay him
RE: ...
Sammo85 : 9/13/2021 8:01 pm : link
In comment 15365351 SFGFNCGiantsFan said:

I wonder if the WR next to KG should have had a better rub on the corner...?

Regardless, there was a play to be made if Jones is (1) on time and (2) throws the ball on the high side of KG's catch radius because Fuller is only 5'10".


I tend to see potential in players and almost always believe the mistakes can be eliminated. Some other fans see performance

You re right about Jones on a per game basis, he s been more consistently mediocre


It's quite clear to me the Shurmur/Reid offense is much easier for QBs to play in, or at least certain types of QBs. And Jones played really well in it his first year.

And I've been saying this all the way back in the early 2000's when Reid took over Philly. There's a ton of easy pitch and catch throws.

This offense is going to be the demise of Garrett - and DJ - as far as being Giants IMO.

There is no rhythm to Garrett's play calling, no taking what the d is giving. It's mechanical, JG's head buried in HIS playbook, WITH NO FEEL FOR WHAT'S HAPPENING IN THE GAME. How do you run SB between the tackles six, eight times and not realize you don't have the Cowboys' OL and Ezekiel running behind it? How do you not get SB in space, some play action, man in motion with reverses with your new toys? Mind boggling. Keep the d off balance.
Pages: 1 2 3 | Show All |  Next>>