BigBlue in Keys : 9/24/2021 1:07 am
So starts a weekend to celebrate our beloved captain #10. A man who never missed a game and took us to the promised land twice. Giving all of us some of the best and most unforgettable moments of our lives along the way. Post your favorite Eli picture below and let's celebrate all he gave to The New York Giants.

Yeah. LT was a better player but he came with the baggage.


Loved that exchange in the locker room. I think it was after the first SB. That woman had balls to do what she did in front everybody present and the entire country.

Think about it - all those people (mostly men) and she calls out Bradshaw (who is and has been a Football celebrity since the 70's) in front of everyone ... and on national television!!!

Tough: See the San Fran playoff game. Or that first hit he took versus the Eagles. Or when they said he'd be out 10 weeks with a shoulder injury and he started 7 days later.

Clutch: Game winning drives against the Pats in 2 Superbowls. 35+ come from behind victories.

Class: Has any giant ever represented the city and organization any better. "Once a Giant, only a Giant."

Talent: Top ten in every statistical category of all time.

It was an honor and a privilege to watch him play QB for my favorite team.
''How come you never pick the Giants!''
BigBlue in Keys : 9/24/2021 8:06 am : link
Great memory from that time. Eli's face in that picture to me shows a man at the top of his careeer. A validation of all the crap that was said about him and now he holds something you can never take away from him. A face full of such emotion by a guy who rarely ever showed any.

Iconic pic above from San Fran as well calling for time out while probably seeing double after the hit he took. The toughness he showed over 16 years personified in one game and that image in particular.
RE: Eil Manning
exiled : 9/24/2021 8:09 am : link

Same.
That 2011 Playoff Gane in SF
LTIsTheGreatest : 9/24/2021 9:37 am : link
solidified his legacy in NY in my mind. He took a tremedous beating from that SF defense and just kept getting up. That throw he made on the run to Bradshaw for a 30 yard gainvery late in the game was typical Eli, making something out of nothing. That and the Championship game in GB on that frigid night were my two favorites. Congrats Eli on a great career.
Listened to the “All In” episode with WRs yesterday
Daniel in MI : 9/24/2021 10:24 am : link
They talk about how just on top of the game Eli was re: what the other team would do, looks they’d give, adjustments to make, and plays to run. They said he had it down so cold, they took it for granted. They’d have a late week meeting with E and the WRs and he’d just say “they’re going to do this in the red zone, so I want to do that. They’ll show like it’s this coverage, but it won’t be, they’ll really be in that here.”

Some went to other teams and were like, “oh, yeah, not everyone is Eli.”

Also earlier episode said plays like Manningham in the SB didn’t just happen. He set garage cans at different sideline distances and wouldn’t go in until he dropped it in enough times.

Ruining one hell of an an amazing streak.

Thankfully BBI will never forget his resilience and toughness and desire to just be on the field and win a game.


Ditto! Agree 💯
I was fortunate enough
EliIsEliteX2 : 9/24/2021 12:10 pm : link
To be able to attend the 2011 NFC Championship game in person. Flew out to SF with my dad and witnessed one of the most unbelievable performances by a QB. Every single hit made you think he wasn't going to get up but of course, he did. Eli was so special. He will forever be my favorite athlete. Can't wait to be in attendance this Sunday for what should be an awesome ceremony.
.
Ron Johnson : 9/24/2021 12:29 pm : link 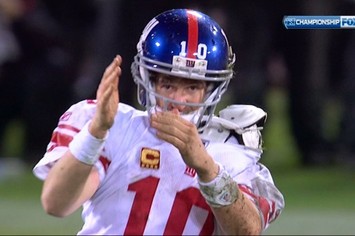 I gotta go with this one because
myquealer : 9/24/2021 2:26 pm : link
I'm in it. On the right my brother is holding the cheesehead under his arm. I'm the guy between him and the security guard in the yellow coat. I have an Eli jersey on, but it's under my coat as the -23 windchill was quite brutal. 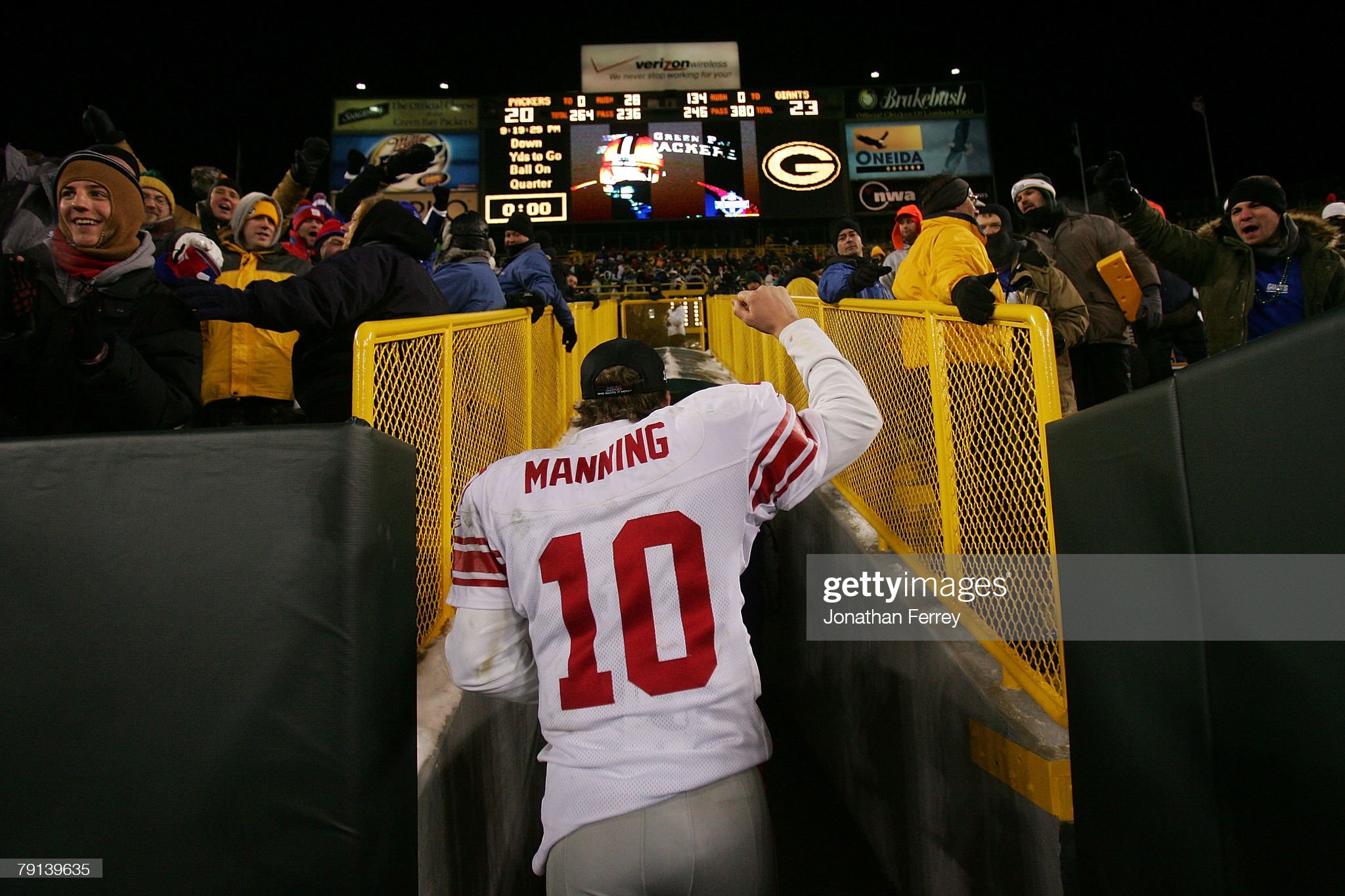 I think I might have been more excited winning that game than actually winning the Super Bowl. Winning the Super Bowl was as much relief as it was joy. No one gave us a chance against that Packers Team.
RE: Here you go Myqueler
myquealer : 9/24/2021 5:32 pm : link
In comment 15381504 BigBlue in Keys said:


Thanks, Big Blue in Keys. Yeah, that win in Green Bay was huge. The last game I’d been to was the Seattle game where Jay Feely missed three game winning field goals. The Green Bay game was feeling awfully familiar…. Once we won that game I knew we’d have a good chance in the Super Bowl given how close we played the Patriots in week 17.
Giants.com had the same idea.
BigBlue in Keys : 9/25/2021 1:06 pm : link
800+ pictures looking back across his career if anyone is interested
Eli By the pictures - ( New Window )
I didn't see all the teammates with him yesterday
Matt M. : 9/27/2021 8:47 pm : link
And, with them all wearing Manning jerseys, it was hard to tell. Who was there?
It was incredible, they came off the field right next to us.
BigBlue in Keys : 9/27/2021 9:37 pm : link
I got a wave from Eli. Tuck and Cruz stayed hanging out in the tunnel right under me. Just kept yelling thank you to all those guys. Manningham, Plax, Diehl, Tyree, Feagles, O'Hara that I could pick out. Bunch of others as well. Such an incredible scene.