NFT: NHL Thread: Season Less than a Week Out

A lot of things to discuss:
1. Eichel activity picking up (LAK, NYR and LVG the rumored landing spots) I read yesterday it's beyond medicals at this point and the teams involved have seen them and are comfortable they have a treatment plan.

3. Rule changes: not much, mainly just stricter enforcement of cross checking. Not sure how it will manifest, but my guess is two places - along the boards and in front of the net where cross checking has become almost an accepted method of play will become a penalty - early in the season expect a lot of those calls

4. Obviously COVID protocols, and cross border. The NHL has a lot of protocols for unvaccinated and fines or suspensions for missing those protocols, I'm not clear on all of them yet, but I do know in Canada if you are not vaccinated you cannot leave the team hotel for anything except team activities. Not sure if that's true in the US too.

NHL News
@PuckReportNHL
·
25m
INJURY UPDATE: Vegas Golden Knights forward William Karlsson expected to miss roughly 6 weeks with a broken foot, per @JesseGranger_
. #VegasBorn
RE: Mercer has been the brightest spot on the team so far
Jay on the Island : 11/2/2021 12:42 pm : link
In comment 15435954 Stu11 said:

I think that Sharangovich will turn it around as I believe last season was not a fluke. He clearly misses Hughes but I would like to see him get more time with Nico until Hughes returns.

I loved the Mercer pick when it was made and he has been as good as advertised so far. A 19 year old playing top six minutes in the middle and producing is very impressive. This kid is solid in all situations and he is becoming a key long term piece. Johnsson is having a great start but Mercer is a big reason why. The Johnsson Mercer Bratt line has been one of the few bright spots so far.

In other habs news, Cole Caufield was sent to down to the AHL. I don't mind that other than he was playing 1st line mostly and PP1 in the NHL, so it's not like he wasn't playing. Just not scoring.

I was choked up watching that.
Watching the Devs on ESPN +
Stu11 : 11/2/2021 10:35 pm : link
This broadcast is like amateur hour. I like Kevin Weakes in the studio but he's stiff as a color guy and this woman doing okay by okay is like a bad AHL play by play person.
Superb job by Linda Cohn between the boards
Stu11 : 11/2/2021 11:30 pm : link
Managed to relay to us that Troy Terry improved because he bought a dog this summer but she hasn't gotten around to telling us that Dougie Hamilton is apparently injured. Thankfully the Devs team reporter Amanda Stein is always all over this stuff on Twitter...
.
pjcas18 : 11/3/2021 1:13 pm : link
Emily Kaplan
@emilymkaplan
·
13h
Here’s the latest on Jack Eichel.

Multiple sources tell ESPN it’s down to Calgary and Vegas. Sabres GM Kevyn Adams is working hard to get it done, but neither team has met his asks yet.

Sources say both teams are OK with Eichel getting his preferred surgery.
Kravtsov is a RFA after the season
pjcas18 : 11/3/2021 1:27 pm : link
I see a divorce coming not a reunion. Probably a deadline trade.

Larry Brooks
@NYP_Brooksie
·
2m
Rangers are working on loan agreement for Kravtsov with KHL Traktor Chelyabinsk...From what I can glean, never say never to possible reunion with Blueshirts...
It's a great day
Jay on the Island : 11/3/2021 2:20 pm : link
Wedgewood was just placed on waivers. I'm not sure what the Devils are going to do with him because they have their top two goalie prospects Nico Daws and Akira Schmid in the AHL right now. I hope they just release Wedgewood rather than send either one of the prospects to the ECHL.
If Dougie Hamilton is out for an extended period of time
Stu11 : 11/3/2021 2:31 pm : link
Like Jack, this season is gonna go south in warp speed. Last night was as an uninspired effort against a mediocre Ducks team as I've seen in a long time. How Naserdine and Rechi
Still have jobs is a complete mystery to me. We have had by far the worst specials in hockey for a season plus now. It's a complete embarrassment. We took 2 too many men on the ice penalties within 5 minutes last night. That is a new level of ineptitude.
RE: If Dougie Hamilton is out for an extended period of time
pjcas18 : 11/3/2021 2:38 pm : link
In comment 15441702 Stu11 said:

Well said, I was expecting Recchi to be let go after last season. As you said the Devils will hit rock bottom if Hamilton is out for an extended period of time. Hopefully they fire the entire coaching staff at seasons end.
No idea if this is true
pjcas18 : 11/3/2021 6:06 pm : link
but if I were BUF I'd jump at this trade offer - especiallky if no salary is retained.

Absolutely. If that's a true offer Buffalo will never do better.
Eichel
pjcas18 : 11/4/2021 7:42 am : link
trade done, not positive if the terms matched above, but details coming out now. Not sure it needs it's own thread.

If they don't make any Skinner-like gaffes they can remake the whole complexion of their team.


No, if they threw in Schneider or Lundqvist with or maybe even instead of Strome maybe a stronger offer (since Tuch's health is a question).


Krebs is much better than headcase Kravtsov. Strome I think benefits from the talent around him that he won't have in Buffalo. In addition, I think Buffalo wanted the more physical play of Tuch.
Thanks, guys.
BrettNYG10 : 11/4/2021 9:30 am : link
The offer seemed a little light, but my knowledge of prospects is very weak.


I think the key is that Tkachuk is an RFA and no way BUF takes the risk that Tkachuk would not sign and they'd want a window to negotiate an extension.

That's a good point, I would jump at that offer if Calgary allowed an extension as part of the deal otherwise I would pass.
Something to keep an eye on around the deadline
pjcas18 : 11/4/2021 10:56 am : link
when Eichel is expected to be back.

From what I know, neither Pacioretty or Stone is expected to be out long term.

Nick Kypreos
@RealKyper
·
21m
Besides Travis Dermott, hearing that @leafs
have also made it clear to @NHL
clubs Justin Holl is available in trade discussions. More detail with @jtbourne
and @SamAMcKee
today 3-5pm est @FAN590
The Devils have promoted Alexander Holtz
Jay on the Island : 11/4/2021 2:10 pm : link
He is expected to play tomorrow versus the Kings.
RE: The Devils have promoted Alexander Holtz
pjcas18 : 11/4/2021 2:20 pm : link
In comment 15443198 Jay on the Island said:


Holtz vs Raymond is one of those debates hockey nerds would have for hours. In the end not much separated them (in draft terms) Raymond went #4 and Holtz #7.

I admit I was torn. I love Holtz shot. Not many players at any level can wire it like he can. The sniper is becoming more and more rare in hockey so if he proves his shot is still elite at this level he will have a long and prosperous career.

I thought Raymond was more well rounded and off the charts from a play maker standpoint. He looked great a couple nights ago vs the Habs though didn't convert to the stat sheet. Which is sort of the issue with players like Raymond (who does have a hatty this year) is when they don't score, a lot of the good they do is lost on some fans.

I wanted Rossi there because he's a center but I was very happy to land Holtz because he seemed like a perfect fit next to Hughes or Hischier. The Devils desperately needed a sniper.
The Isles
KDubbs : 11/4/2021 3:05 pm : link
traded Boychuks rights to buffalo to help them get to the cap floor
.
pjcas18 : 11/5/2021 11:12 am : link
NHL News
@PuckReportNHL
·
13m
BREAKING: Ottawa Senators name Brady Tkachuk the 10th captain in franchise history. #GoSensGo
Fox is the goods
pjcas18 : 11/5/2021 1:00 pm : link
but so is TDA, giving him away is unfortunate. 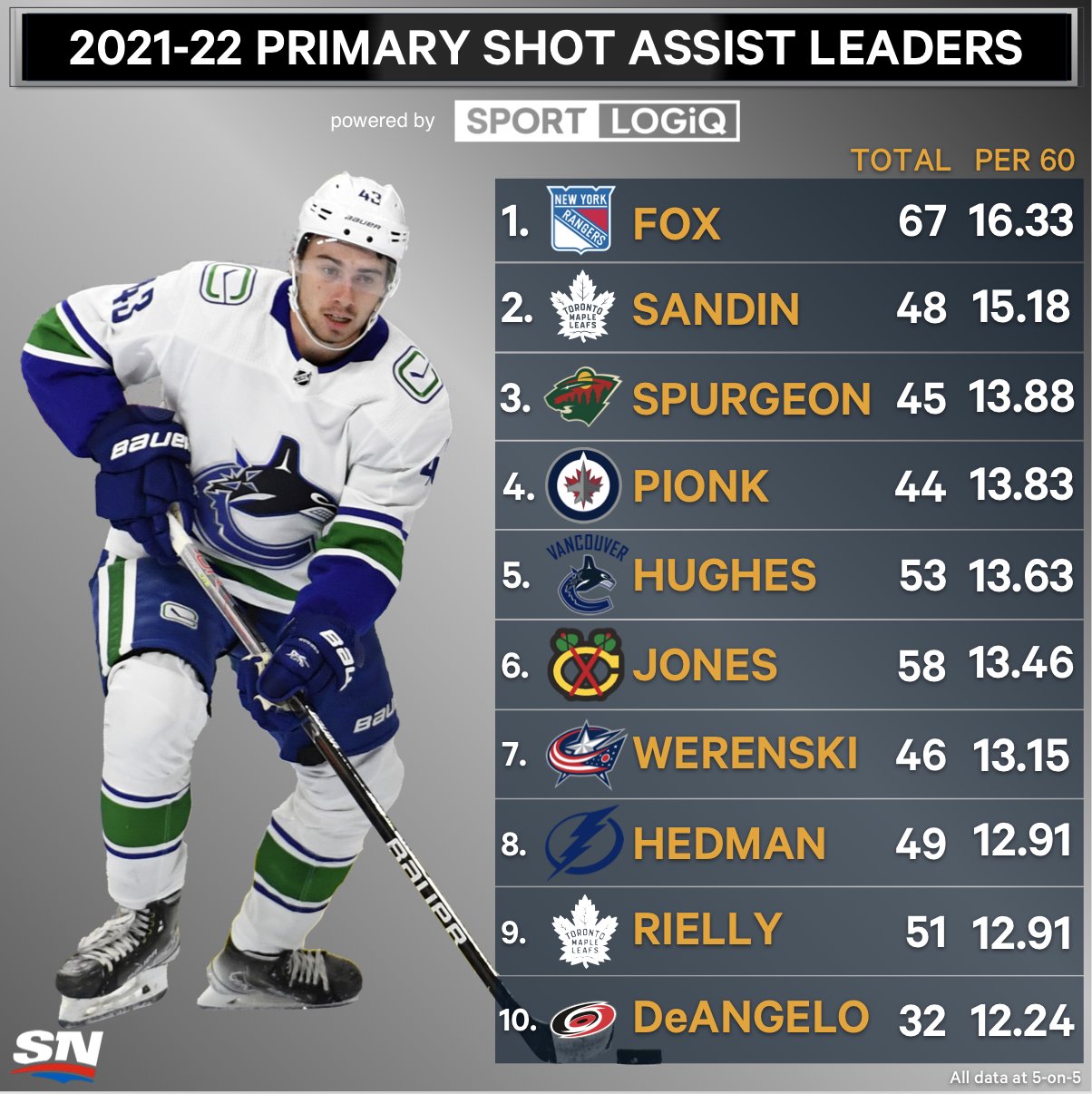 that Trouba trade sure didn't work out very well
Greg from LI : 11/5/2021 1:06 pm : link
.
Lindy Ruff has to go
Jay on the Island : 11/6/2021 10:40 am : link
Sharangovich received just 10 minutes of ice time last as he has been buried on the fourth line along with Kuokkanen who received just 7 minutes which is less than Gauthier who still doesn't have a point despite playing in every game.

The defensive breakdowns on the goals were horrific. Severson played like he bet on the Kings. Even Graves coughed up a clear with 5 seconds left in the 2nd. Zacha and Bratt were the bright spots on offense. Zacha is going next level with goals in big spots this year. Blackwood looked sharp in his debut except for the 2nd goal which he should have had. Agreed on the playing time. Sharengovich is obviously in Le chateau bow wow. We need his scoring especially without Jack. He needs to be a top 6 fwd.
No idea
pjcas18 : 11/6/2021 4:38 pm : link
why teams continually recycle coaches.

never a fan of Ruff in any capacity. I did think it was funny when rangers fans used to blame Ruff for the defense deficiencies last year when they were running out guys like Brendan Smith, Marc Staal, and young guys like Miller. Like it was Ruff's defense "scheme" that was the cause of the defensive woes.
Pages: 1 2 3 4 5 6 7 <<Prev | Show All |  Next>>