Who is your favorite Giants kicker of all time

I think feel very comfortable with Gano but he hasn't done anything truly memorable yet.

Matt Bahr was kind of before my time, but he seems like the obvious pick.

No one else stands out to me. 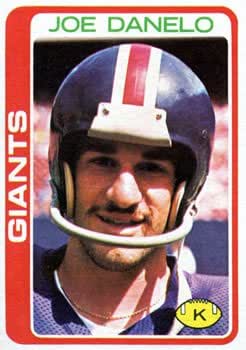 Danelo - fun nostalgic choice, but he simply wasn't a very good kicker. And FWIW, during his era, Brad Van Pelt, Dave Jennings, Harry Carson were the only Pro Bowlers on the team in general.
Pete Gogalak
WillieYoung : 10/8/2021 7:58 am : link
First soccer style kicker in the NFL. His signing by the Giants from Buffalo Bills ignited the process that led to the NFL/AFL Merger. He grew up in Ogdensburg NY and kicked in the Northern League where I played (sparingly).
Tynes has the statistical edge over Bahr
truebluelarry : 10/8/2021 7:59 am : link
Tynes career FG% is 83.6, Bahr is only 75.3.

Bahr is most (and correctly so) for his 5FG performance in the 1990 NFCCG, but I think that skews fans perception of him. The Giants have had more accurate kickers than Bahr since.

Matt Bryant was an 80% FG kicker, Jay Feely 84% and Aldrick Rosas and Graham Gano are both above 90%.

Kickers in general continue to be more accurate over time (hence the move of making PATs at 35-yards)
Pat Summerall
NYGgolfer : 10/8/2021 8:00 am : link
everybody else is a rung down in the all-time ladder.

And I’m blanking on his name, but the Tynes era punter who ran around yelling “Super Bowl Kick, Baby!” when he went to hold in the NFC Championship.

Bahr and Tynes were clutch. Tynes is also all big blue on Twitter, too. He was psyched when we beat NO and posted of him jumping off the couch and high fiving his kid.
Of course it would be Jennings if this was to include punters.
chick310 : 10/8/2021 10:05 am : link
He was the only weapon the Giants actually had on the team during the 70s always flipping the field.


HAH there it is!!!
Ben Agajanian. And Pat Summerall.
Red Dog : 10/8/2021 11:56 am : link
Was missing three toes on his kicking foot but was still a very good place kicker. Good enough to have a job as solely a place kicker when that was not common in an NFL with 33 man rosters.

And Pat Summerall. 49-yards, probably more in a driving snow storm to beat the Browns. The very definition of clutch.

Matt Bahr and Ali Haji-Sheikh are right up there, too. Bahr was another clutch kicker, and the Sheikh set a GIANTS season FG record. Besides, Ali was born in Michigan and when the press asked if he'd ever been in a foreign country, he said Canada.
RE: RE: RE: Not one mention of Bjorn Nittmo?
myquealer : 10/8/2021 12:01 pm : link
In comment 15403006 Bold Ruler said: