Doesn't excuse punching a guy with a helmet on simply because there is no reward to it other then breaking your hand.

Bigger picture though, we have to keep this guy's head on straight - he's electrifying on the football field.
get the maturity/learning
bigbluehoya : 10/11/2021 11:16 am : link
stuff out of the way when you're getting smoked, and don't let it happen again when it can actually hurt the team.

Joe Judge better be careful about how he handles that internally. Everyone is giving the Giants credit for playing hard despite their situation, but if he goes after KT in the locker room - it's going to end badly for him.

As it is, being the kind of coach he is and the record they have...it's not real hard to see them packing it up on him.

we need him.
Good news
Jay on the Island : 10/11/2021 11:24 am : link
Judge was visibly angered by the punch but hopefully that's the end of that.
Banks had an (uncharacteristically) inane
NoPeanutz : 10/11/2021 11:25 am : link
criticism of the team that there was no 'Alpha' in the locker room. No emotional heart to react and fire up the troops.
Toney is an alpha. The guy looks like a complete emotional maniac, who channels his passion onto the field, and I'm 100% here for it.

Meanwhile over in Dallas
Everyone Relax : 10/11/2021 11:25 am : link
Jabrill Cox bragging on his instagram about knocking out Jones
Link - ( New Window )
I have no issues
thedogfather : 10/11/2021 11:28 am : link
with one of our guys fighting back when provoked. Someone needs to show some fight! My only issue was Toney risking hurting his hand punching a helmet.
I'm genuinely interested
Everyone Relax : 10/11/2021 11:33 am : link
to hear what his "serious character concerns" were pre-draft. He's a unique personality and loves his side hustle of rapping, but the kid gives it his all every week. I see no diva in him either. What am I missing?
No need to apologize.
Dave in Hoboken : 10/11/2021 11:35 am : link
Might be the only guy on the team (hell, the entire organization) with a pulse.


That needs to be on a Giants bulletin board until they come up to NY.


I'm not ready to proclaim that, but a few more games like we've been seeing and he may indeed have that crown.


to quote Bruce, maybe I'm just like a dog thats been beat too much, but I don't see his career with the giants going smoothly. I predict just as many highlight reel plays as bone headed actions on and off the field and Giants fans clamoring to cut him.


8 out of 10 times that is a PF. In college, probably an ejection - close but Cox did lower his head too. 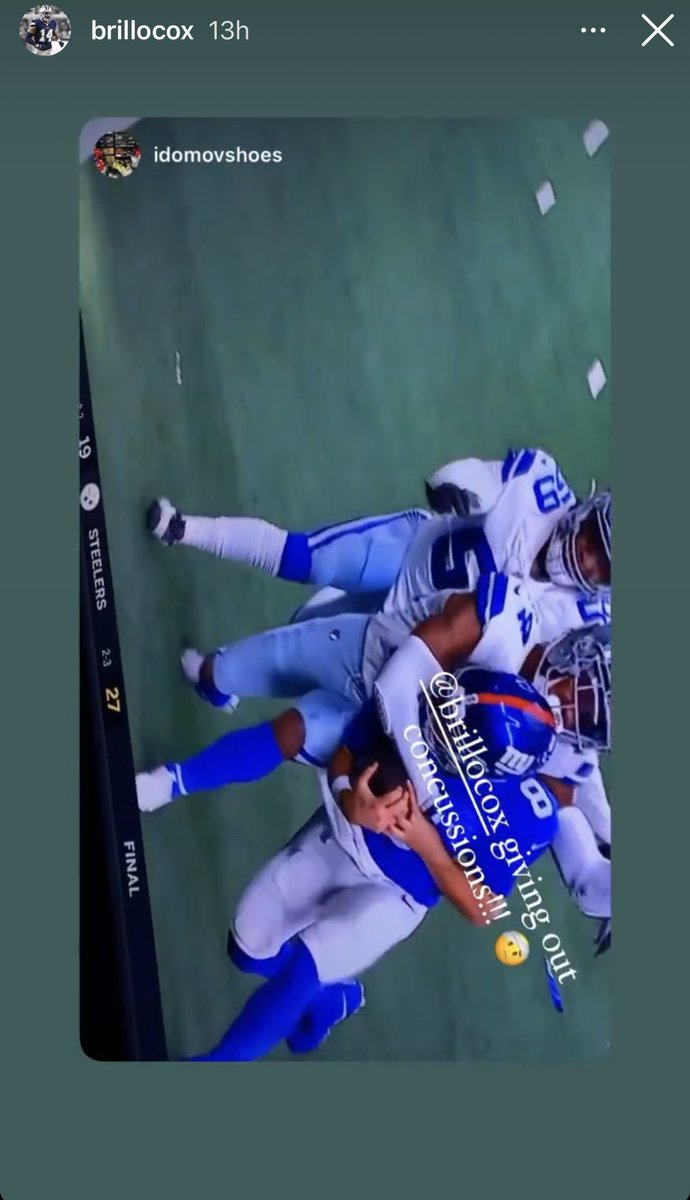 
Not sure about the penalty since Jones was a runner and lowered his head. Either way, really cowardly move taunting Jones about it hours later on social media.
UConn
bc4life : 10/11/2021 12:30 pm : link
Agree it wasn't a dirty hit by Cox, Jones lowered his head - it's football and helmets are dangerous weapons.


How many times have we seen a RB/WR lower their head and the DB or LB collide with it and get called. Jones has every right to go low. In fact, I want to see anyone run and try to get low without their head out front. It is a physical impossibility for a runner to extend forward without their head leading. I have seen numerous times the same play and the defense gets called, even ones I totally disagree with.
. . . .
jeff57 : 10/11/2021 12:33 pm : link
Kadarius Toney: 93.3 receiving grade in Week 5


I dont think the Judge you see in Press conferences is the same guy the players see behind closed doors, Judge is the type that is a hard ass to the media but i thibk he cares a lot about his players and has their back and i thinkt he players appreciate that..
RE: NY Sports Media Will Try to
ron mexico : 10/11/2021 1:00 pm : link
In comment 15408535 clatterbuck said:

"This is not a game for the most well-adjusted people"


There's better and smarter ways to exact revenge, eg, keep doing what he was doing on the field before his ego took over. There's always going to be chances for that, and to drill the same guy later on a block downfield.
No excuses for poor Giants' play..,,,,,
royhobbs7 : 10/11/2021 1:13 pm : link
but officiating, seems so one-sided, it almost looks like the zebras are paid off to side with the Cowboys. They are quick to throw personal fouls against the Giants, but rather reticent to do against the Cowboys for similar or worse fouls.

There was a whole lot of blindness when the cowturds were on defense.
When's Rudolph going to apologize for getting Jones bell rung?
trueblueinpw : 10/11/2021 1:47 pm : link
He's a disgrace. Forget about walking away from the fight - he's "block" on the play where Jones got his bell rung was fucking pathetic. If he stays on his block or even if he leaks into the end zone after his shitty little push then Jones might have made it to another play.

But posting “giving out concussions” in a league fighting a PR battle that football is a game that damages players’ brains permanently, where youth football is dropping off on this issue? Baaad look.

He should be fined big time.
We forget that these players are very young
lawguy9801 : 10/11/2021 3:55 pm : link
How old is Toney? 22, 23? Speaking as a male who was once that age, most males that age are incredibly immature. Hopefully he will learn from it and that it is part of the maturation process. Glad that not only does he appear to be the real deal talentwise, but that he gives a shit and has fire in his belly. He was maybe the only bright spot from yesterday's dismal game.
RE: Jones is a runner
ron mexico : 10/11/2021 3:57 pm : link
In comment 15409096 Daniel in MI said:


I mentioned on that other thread that it wouldn't surprise me at all if Toney was hearing all game about Jones being KO'd from the Dallas players and finally had enough once he took his own cheap shot.


Yeah, we saw him run to the cart when Jones was taken off. He also threw the punch after the Cowboys started shoving Engram after Engram started some pushing of his own in reaction to the late hit on Toney. He may be just one of those dudes who is hyper protective (I think the painted gun incident was in an effort to defend his friends as well). Don’t get me wrong though, it was still stupid, and as JonC said, there are better, smarter ways to get back at Dallas. Just playing a little arm chair psychologist.