On October 22nd, the New York Giants filed a trademark application for GIANTS (logo below) for use in relation to football helmets, football schedules, and media guides.

Description of Mark: The mark consists of a stylized version of the word GIANTS.

I’d prefer they bring back the old uniforms. The color rush tops should be permanent
They can wear overalls...
BamaBlue : 10/27/2021 12:04 pm : link
just win baby.
Doesn't mean anything really
Ben in Tampa : 10/27/2021 12:19 pm : link
just keeping control of their intellectual property
Could mean nothing,
truebluelarry : 10/27/2021 12:35 pm : link
but then again it could mean something.
Possibly they've been inching toward this with the gradual move toward permanent use of white pants the past few years.
This year grey was officially removed as an official team color as well.

These unis are the BEST!!!

The Giants looked "BAD-ASS" when they ran out of the tunnel and it translated into their marauding defensive style. 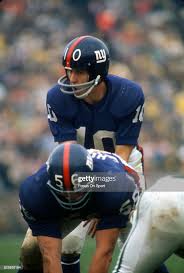 Not gonna break my heart if they went back to the Parcells Era unis, though.
Those era uniforms and helmet are my favorite
moespree : 10/28/2021 4:44 pm : link
Not just for the nostalgia of the winning days either. I just like them the best.