RIP #70
RIP to an all time great.
truebluelarry : 11/13/2021 5:31 pm : link
Huff made playing defense cool. Cover of Time Magazine, his very own TV special hosted by Walter Cronkite, Huff was the shit.

He was also my father's favorite player. He talked about Huff every time we went to a game at Giants Stadium, I feel like I saw him play myself after hearing some many stories of Huff going head-to-head against Jim Brown and Jim Taylor. 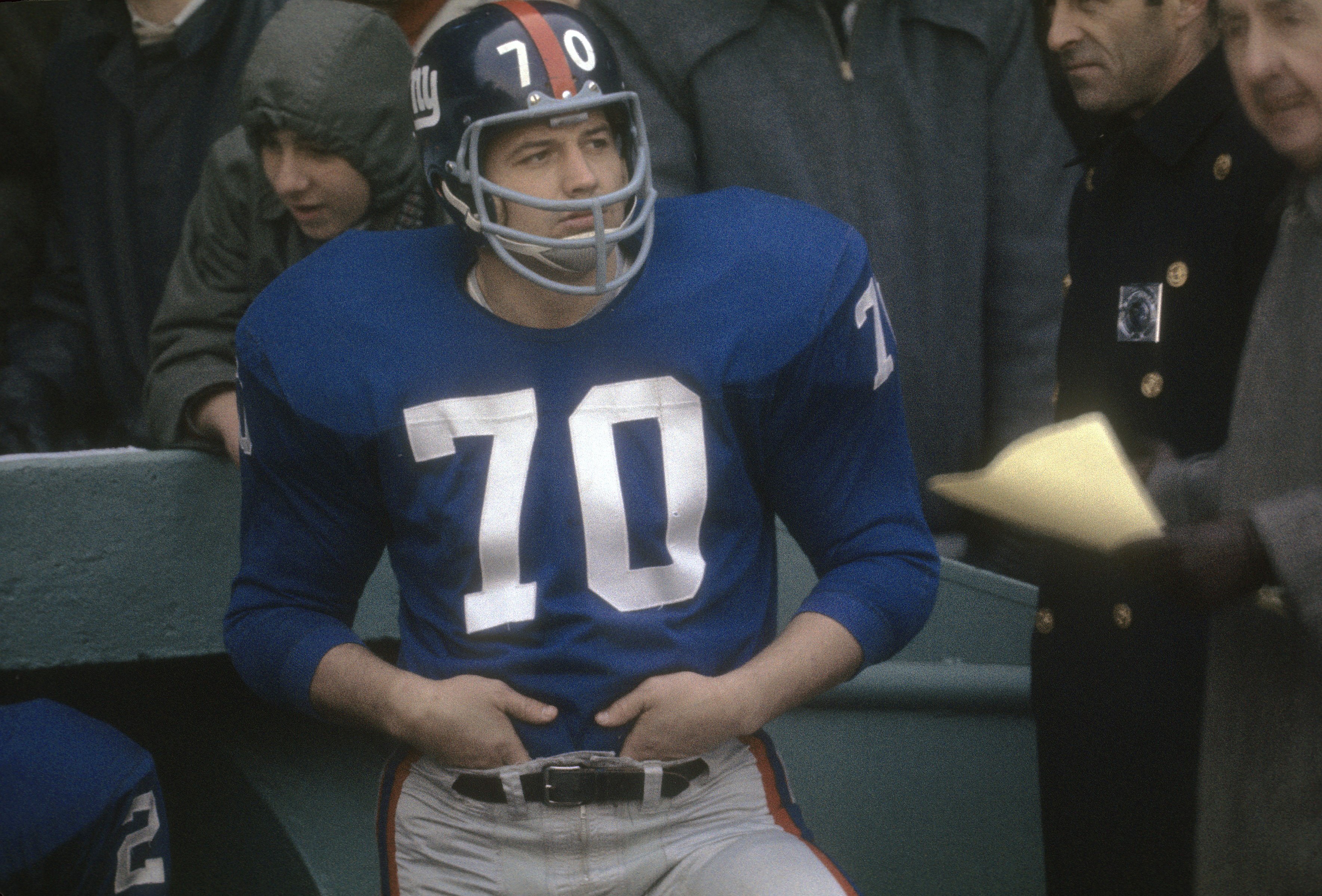 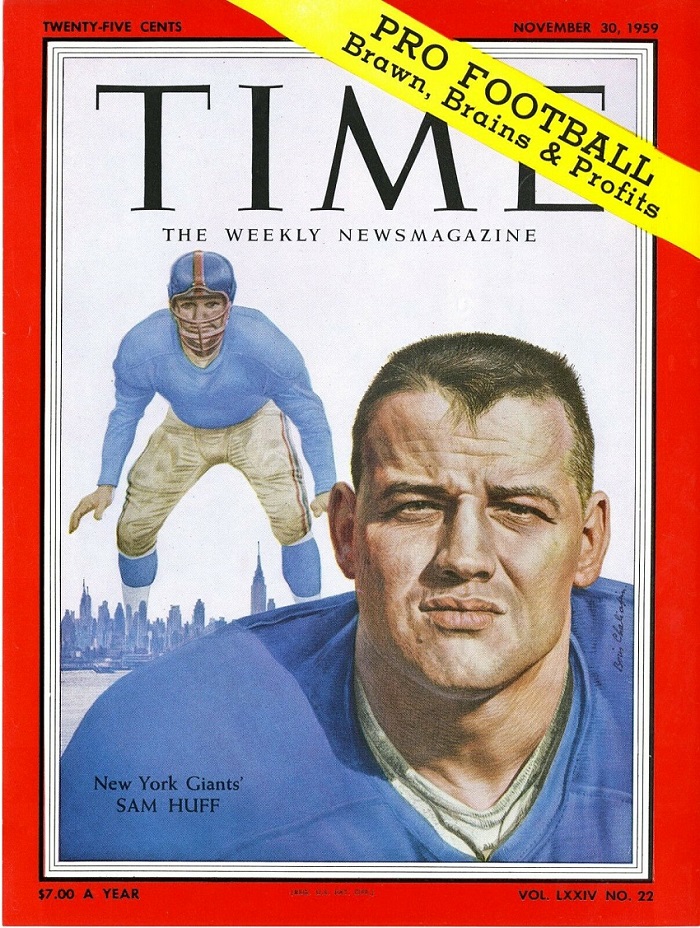 R.I.P. Sam, and condolences to the family.
A sad day. I rememberr sitting in Yankee Stadium
DSPCSP : 11/13/2021 5:57 pm : link
screaming Defense!! Saw the '56 championship game there. What a day.
RIP Sam.
The Violent World Of Sam Huff
Dennis : 11/13/2021 6:21 pm : link
Wonderful football player.
He and Gifford were at odds with each other, as part of the rivalry that the offense and defense had. Huff thought Gifford was a pretty boy, and in general, the defense disdained the offense at times. This was when the defense began chiding the offense to "Just hold em".
The Violent World Of Sam Huff - ( New Window )
RIP
dpinzow : 11/13/2021 6:42 pm : link
Didn't see this thread initially

He was one of the greatest LBs of all time, perhaps the greatest of the old school LBs along with Butkus
RIP
US1 Giants : 11/13/2021 6:45 pm : link
Great player. Wish that he had always been a Giant.

From the NY Daily News - including a Bill Galo cartoon! :)


Larry, were you alive then? You've made reference to your father, so I don't know if you're old enough to remember the trade?
I remember I felt like I had been kicked in the stomach. Same way I felt when I heard Tom Seaver had been traded.
The Trade
truebluelarry : 11/13/2021 8:32 pm : link
from the Washington Post


No, I was born in 1968.
My deep appreciation for football history comes from my father. He loved football and the Giants (my grandfather first got our season tickets in 1961 I beleive) and Huff was his favorite player. When my father would take my sisters and I to the games at Giants Stadium he'd always tell stories of the Giants teams with Huff, gifford, Tittle, Webster, et al at Old Yankee Stadium.
Defence vs Offense Rivalry
truebluelarry : 11/13/2021 8:48 pm : link
The earliest mention I've found, so far, comes from this November 11, 1959 article in the NY Herald-Tribune.

My father’s favorite player too. Dad passed 3 years ago, and today would have been his 79th birthday.


Larry, it's clear how much you love and respect your father. He must have been a really special guy.
Huff predicts 1958 Giants-Colts
truebluelarry : 11/13/2021 9:13 pm : link
as, "probably the greatest gaem ever played"

Holy shit! This might be one of the coolest finds I've ever come up with!

This comes from the December 26, 1958 edition of Newsday. The quote is in the 2rd paragraph.

Give 'em another one for me, Sam!
RIP Mr. Huff.
short lease : 11/14/2021 5:42 am : link
The article that I read said that Tom Landry moved him to middle linebacker as a rookie and all the plays were designed to be "funneled to him". First Linebacker to start in an NFL championship game as a rookie.


Your upbringing with the Giants sounds a lot like mine. My Dad did the same thing with my brother and I while we were watching them get killed during the '70s. I was born in 1964, my brother 1967.
Absolute Insanity
varco : 11/14/2021 6:48 am : link
Trading away the heart and soul of a championship caliber defense at the peak of his career and to a division rival! I recall the Giants having real problems replacing him. Initially, I believe they tried Jerry Hillebrand! The only half way decent MLB in the ensuing years was a year or so of Vince Costello after he was waived by Cleveland. Good Lord, what was Allie Sherman thinking? Seems they were intent on tanking the team, trading Little Mo, Erich Barnes, Rosey Grier and Huff. I also recall Sam Huff taking great pleasure in beating the Giants in the ensuing years. RIP #70.
btw, his autobiography is excellent if you haven't read it.
Victor in CT : 11/14/2021 7:11 am : link
Tough Stuff
Tough Stuff: The Man in the Middle - ( New Window )
Wow, brings back my first memories
5BowlsSoon : 11/14/2021 7:28 am : link
Of being a Giants fan. This guy stuffing the Great Jim Brown.

RIP oh great one. Thanks for the many great memories back in the 50s-60s.
Just a great NY Giant player
Jimmy Googs : 11/14/2021 8:02 am : link
If my grandfather were still around today, he would say Huff his favorite player of all-time...guaranteed.
Allie Sherman was both an idiot and a monster
GeofromNJ : 11/14/2021 8:22 am : link
for trading Sam Huff. It was the beginning of the long decline of the Giants, not to be reversed until the league force Wellington Mara to hire a GM who would be independent of Mara's meddling.
Sam Huff didn't hate the NY Giants
arniefez : 11/14/2021 10:01 am : link
He loved the NY Giants and hated Allie Sherman.

Like a several people who posted on this thread that are my age I am a NY Giant fan because my father was a NY Giant fan. Sam Huff was his favorite player and again like several people who posted on this thread he passed down the stories of the great NY Giants defense of the late 50's and early 60's that I was too young to appreciate.