Even if they signed Matz, they still needed to acquire 2 starters better than Matz..

They need to sign Stroman and then at least 1 guy better than Stroman.


Frustrating when players/agents do this...I'd be pissed of I were Cohen too. Remember when Steve Smith did it to the Giants? I still haven't forgiven him for that.

it doesn't have the effect he thinks it has, it makes him look weak and whiny.


Meh..his Twitter doesn't bother me ever. I don't get the bobby reference because that character is played by one of my top 2 least favorite actors of all time (him and Spader)

I suffered way too long with the Wilpons to be upset over Twitter nonsense that beat reporters will blow out of proportion...

Axelrod's character is loosely based on Cohen. Certainly not the looks part.
Agreed, I dont care about the Twitter stuff, just sign some good f'n players already. Honestly happy we arent bringing back players that didnt work for us the first time around/
RE: RE: I don't care if Cohen
pjcas18 : 11/24/2021 9:55 am : link
In comment 15465857 moze1021 said:


I'm not upset. I'm unemotional like I wish Cohen would be. At least publicly.

And you do realize Bobby Axelrod was based on Steve Cohen, right?

Sherman spoke Cohen and said Matz
Metnut : 11/24/2021 9:56 am : link
had reached out to the Mets and not vice versa and told them that he had unfinished business and wanted to come back. Cohen felt like the agent had crossed the line.
missing on matz feels like dodging a bullet but i agree with PJ
Eric on Li : 11/24/2021 10:03 am : link
no reason to whine about it in public. sign someone else who most met fans weren't clamoring to non-tender or outright cut a couple years ago.

and if you are going to whine, do it in a productive way. If something had to be said it should have been something that at least portrays his position of strength - after all he claims he's willing to spend more than pretty much any owner over the next 5-10 years. that's not someone any agent or player should get on the wrong side of.

"In pursuit of a championship I intend to spend more money than anyone in baseball over the next 10+ years so if you want to win and get paid I'm your guy. If your agent is dishonest and untrustworthy I'm not so choose wisely."


Exactly, he certainly isn't helping his front office sign players when he bitches whenever a guy signs somewhere else.


obviously - im not saying they should do something they don't want to do but rather that they should put the full court press on to get something done they have already been trying to do. If it means they pay some small% higher than what their previous ideal number was or agree to 1 extra year or whatever then this might be a situation where it's worth that if it's the right player. put the message out to the agents/players they have been actively offering on that in the next 48 hours they are paying someone's full quote and if they want that player to be them this is their chance.

you don't want the narrative of players choosing to not even give the chance to get paid more by the mets to take root because perception can become reality.
I have zero issue with this
bhill410 : 11/24/2021 10:30 am : link
Why not call out an agent for acting shitty? If they are simply trying to use the Mets for leverage and in direct contradiction to what you stated you shouldn’t be allowed to do that without a direct harm to reputation. Now obviously what he is saying internally with other owners is more on target but why should people not care about sh*tty behavior? Weird thing to get upset about
RE: RE: RE: I don't care if Cohen
moze1021 : 11/24/2021 10:51 am : link
In comment 15465905 pjcas18 said:


Yes I realize that character is based on Cohen...I just know nothing about the character except he's played by a guy who speaks out of the side of a barely opened mouth with a terrible American accent...
From Matz agent
pjcas18 : 11/24/2021 11:14 am : link

I still think Cohen could have sounded less whiny but I give him credit for reacting publicly. Agents/players need him and his wallet far more than the other way around. They cannot continue to let agents leak to leverage the Mets spending power when it suites them and then also not negotiate in good faith.
more from Martino and if true Matz and his agent can just go F off
Eric on Li : 11/24/2021 12:15 pm : link
Andy Martino
@martinonyc
From Mets perspective, it was tone and timeline of events that bothered, not Matz' decision. Told: 1) agents reached out to Cohen specifically on Saturday, professing Matz's desire to be a Met 2) Zoom meeting w Matz and Cohen Sunday w same themes. Tues: Matz signs w STL.

Andy Martino @martinonyc
38m
Apparently the narrative of Matz wanting to return to Mets to complete unfinished business with the organization that drafted him was compelling to the team, which thought a deal was probable.


Seems like a lotto ticket like the McWilliams signing last year. The consistently high walk rate is interesting and his 2021 was Nimmo-esque. Link below is from FG last summer.


great use of whatever $ this cost. Take shots like this all day. No downside.
Cohen has to realize
Vanzetti : 11/24/2021 11:50 pm : link
that the perceived dysfunction caused by him and Sandy is what is responsible for guys not wanting to join the Mets

They were turned down by a bunch of GM candidates and now Thor and Matz, two guys who seemingly wanted to be in NY, go elsewhere on very favorable contracts. And neither guy gives the Mets a chance to match.


Since when is Matz some grand prize? FG predicted he'd get 3 years 42m and if the reporting is accurate he reached out the mets because he wanted to come back. IMO they dodged a bullet because he is not a guy I'd have been prioritizing to pay beyond market rate no matter how much he begged (and reneged).

Sort of separate I really hope we don't end up in a position to have to desperately overpay stroman. In an industry (entertainment) of self centered and non-self aware people he has to be in contention for top 1%. 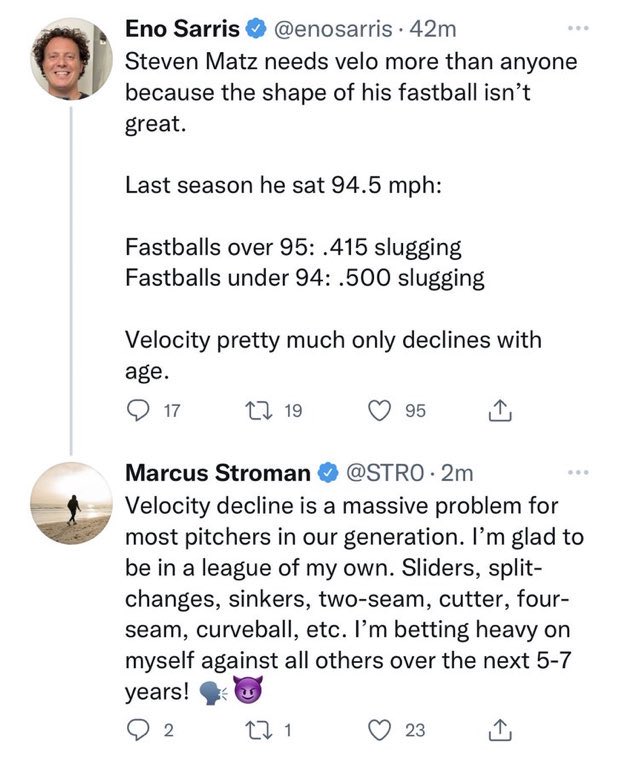