CMicks3110 : 11/28/2021 8:34 pm
Andy Martino
@martinonyc
·
18m
Sources: Mets have offered Scherzer more than $40 million per year. Length unknown. Doesn’t mean he’ll sign there; that’s still unclear.
Pages: 1 2 3 ... 16 17 18 <<Prev | Show All |
you don't seem to understand the difference between HSS and NYM
Eric on Li : 12/5/2021 10:56 am : link
The hospital for special surgery is probably the top ortho / sports medicine hospital in the world. That's why basically every local pro team is affiliated with them and why for many different injuries the best pro athletes get the surgeries there. dr omalley was kevin durants surgeon long before he was a net. They employ the board certified imaging specialists and the board certified doctors who do the surgeries - not the Mets. The HSS's reputation and track record is as good as there is. That's why when their doctors put their name to a public diagnosis (as they did with JDG's elbow) I consider it tinfoil hat level absurdity to question it. I'd imagine one of their orthos are similarly the outsourced authority on decisions re: Daniel Jones right now too, not Ronnie Barnes.

Separate from the HSS the Mets employee their own team of physicians, trainers, PTs, performance team, sports science, etc who run the training programs, manage the rehabs/pt, and generally do probably 99.9% of the actual interacting with the players. Most if not all of those people aren't board certified doctors. Revamping that department is actually something BVW stated as one of his goals (like building the analytics team) though also like analytics it's unclear how much he was able to change beyond making quotes to the press because most of the people from the wilponzi era he inherited remained.

You can read the article below that quoted former head trainer Ray Ramirez (who they fired in 2018 and is not an MD) from this past June re: the scope of that group's daily involvement which he summed up with this quote.

and to put it plainly that right there is where the Mets have had issues going back decades going back to when they tried to make Reyes change how he runs. they haven't had problems with incorrect surgical diagnosis or botched procedures because that was outsourced and would have led to massive malpractice suits.

This is also an area where I think we can have hope Cohen's $ can make a big difference going forward. It didn't last year because we generally saw more of the same in the results because they had 3 key rehabs suffer major setbacks (2 that were non-surgical) but the size of the department has grown so presumably it's on the list of things they've been trying to upgrade.
Former Mets trainer Ray Ramirez reacts to fan criticism over injuries - ( New Window )
lol
pjcas18 : 12/5/2021 11:05 am : link
I'm not confused on the difference about anything.

You seem to think team trainers I guess have sole discretion on a players rehab and treatment plan, not the doctor(s) who operated on them (Syndergaard) or treated them (Carrasco).

Who did the Mets have examine Rocker?

Here is Boras' statement and it will be pretty telling since Rocker allegedly has underwent no medical treatment, no surgeries, and no other specific procedure.

a physical gets done by a doctor. MRIs get reviewed by doctors. the mets head trainer (brian chicklo) is not a licensed dr and neither is his boss who leads their performance team, so im pretty sure they are not the ones who veto'd signing Rocker (which the mets had no incentive to void unless there was a good reason).

since words aren't getting through let's try pictures.

I think this group with the letters "dr" in front of their names - almost all of whom are hss including altchek and the other 2 orthos - has track records we can trust on the medical decisions that require certified doctors involvement. 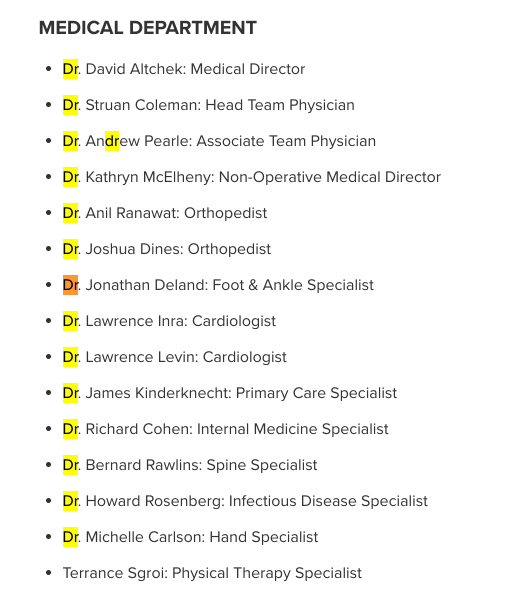 On performance issues separate from acute injuries handled by the drs I think this group on the other hand has a very spotty track record - some over long tenures in the organization. 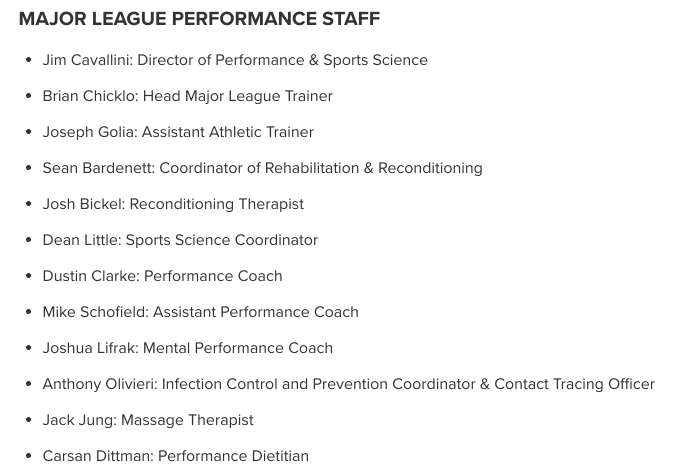 https://www.mlb.com/mets/team/front-office - ( New Window )
Your pictures are as meaningless
pjcas18 : 12/5/2021 11:45 am : link
as your words since you make points no one argued against and you are specious with details when it suits you.

Which doctor did the Mets cite with their medicals?

Who do you think (or more accurately, who do you have knowledge about) determining Syndergaard's recovery process and when he was cleared to return?

Was it someone with an MD in front of their name or do you suggest the Mets left that trivial decision to a trainer or some coordinator or therapist?

you are not discussing things in good faith, you are trying to loosely fit an agenda, and that doesn't interest me.

I'm out. Have a great day.
Thank you for contributions captain good faith
Eric on Li : 12/5/2021 11:59 am : link
You most definitely didn’t try to side swipe a gotcha because I made the audacious claim of trusting that the Mets - who were willing to use the 11th pick and pay 1m over slot for lunar rocker - let him walk for no good reason a week later after his physical.

Also not quite sure how youre in any way proving me wrong about something when I said Thor coming back ahead of the original schedule was a bad idea when it then went…badly.
let me slow it down for you
pjcas18 : 12/5/2021 12:07 pm : link
or maybe I should draw a picture.

My question was, isn't it very possibly the same doctors who came up with Syndergaard's rehab plan and return to throwing (that you did not trust) that examined Rocker (who you do trust).

or you just blame trainers when it suits you because you think a physical therapist or a trainer or coordinator would be left to make such important decisions as to a player returning from TJS.

And your quote about trainers trying to get players back on the field as soon as possible...isn't that their job?

Strange point to make and strange discussion, seems like any time I post something you launch into a diatribe about why you disagree.

I just don't have the time, energy, or desire to respond today. especially when I do not believe you are discussing it in good faith (for whatever reason) and no idea why you would mock that, but whatever.