Giants defense -- anyone else have the feeling this unit

is maybe good enough (or almost good enough) right now to propel the Giants toward a playoff berth, assuming some semblance of a competent offense (which of course is a bad joke right now)?
No
jvm52106 : 12/5/2021 7:16 pm : link
No, not at all. We don't stop people when we have to and we just do not dictate to the opposition in any way whatsoever..
The lack of a pass rush is hurting the Defense......
Simms11 : 12/5/2021 7:17 pm : link
However, I believe they’ve been good enough to get the team to the playoffs if only the offense could score more then 20 points a game!!
No defense is
Giantimistic : 12/5/2021 7:21 pm : link
Strong at every position but we are really just an impact pass rusher away from being really good. I think we have our #2 pash rusher already. We need someone who will get to the an even with a 3 man rush.

Miami scored on half of their first half drives. The defense allowed yet another 80 yard drive for a TD right before halftime. How many times has that happened this year? 10 times?

Yes they forced four straight punts in the second half, but they gave up two key drives in the 4th quarter that salted the game away for the Dolphins.

Don't get me wrong... the NYG offense lost this game, but the defense wasn't that good. This is a bad Dolphins offense that had its best player get hurt during the game.
Liked them better last year
HewlettGiant : 12/5/2021 7:25 pm : link
With Martinez and Fackrell......they were a cornerback short of being real good.....now their DL without Tomlinson and the likes of Crowder, and other scrubs at LB make them weaker regardless of what appears to be improved play.

Let me just throw one other thing out there
M.S. : 12/5/2021 7:30 pm : link
We all know it's a game of synergy and great offenses can aid the defense, and vice versa. Of course, the opposite is true, and the Giants offense is doing absolutely nothing, zero, nada to help this defense. They rarely put up any points and they rarely sustain any drives, and that has the accumulative effect of leaving our defense high and dry.
Absolutely not
noro9 : 12/5/2021 7:37 pm : link
No fucking way
Absolutely not
j_rud : 12/5/2021 7:45 pm : link
They've gotten very little return at the areas they've invested in the most. They're a collection of sidekicks (Bradberry, Williams), underperformers (Lawrence, Jackson, Ryan) and marginal starters (Crowder, Johnson, Carter). There's not a single Alpha among them. Maybe McKinney, but he ain't there yet.
the defense is somewhat respectable I suppose..
BillKo : 12/5/2021 7:46 pm : link
..but how can you even mention playoffs with this offense?

The only thing I will say, plenty were busting on Graham earlier in the season but I think he's got more of clue than the HC at this point.

Translation: he'd be better at the HC gig I think.
In
Eric from BBI : Admin : 12/5/2021 7:49 pm : link
all the years I've watched the Giants, including defenses that were bottom feeders, I have never ever seen a defense give up so many touchdowns at the end of the first half in one year as this one does. It's unbelievable.

Even when you had guys like Jeremy Lincoln at CB, they weren't doing this. Perry Fewell's defenses didn't do this.
yeah
gidiefor : Mod : 12/5/2021 7:54 pm : link
I'm not a believe in this defense either

It's like frikken Swiss Cheese. You put any competent QB against it and they can pick it to death, and it's frikken constant. They also have real difficulty stopping the run when the other team has a semblance of a run game.
RE: In
M.S. : 12/5/2021 7:56 pm : link
In comment 15482749 Eric from BBI said:

True. It is just one more annoying thing about this team that allows TDs at the end of the half. Really frustrating.
No pass rush
joeinpa : 12/5/2021 8:23 pm : link
Equals a defense you can’t trust. Seems every game first half ends with a time consuming drive from the opponent

Our lack of pass rush would be killing us even more if we ever had leads in the 2nd half of games and our opponents weren't just running out the clock to close out games.
Have no idea what Bradberry was doing out there at times.
Jimmy Googs : 12/5/2021 8:32 pm : link
Safeties play too deep, especially when we needed a 3rd down stop.

Fins had plenty of drops which helped this D get off the field. Other than that they were just okay. 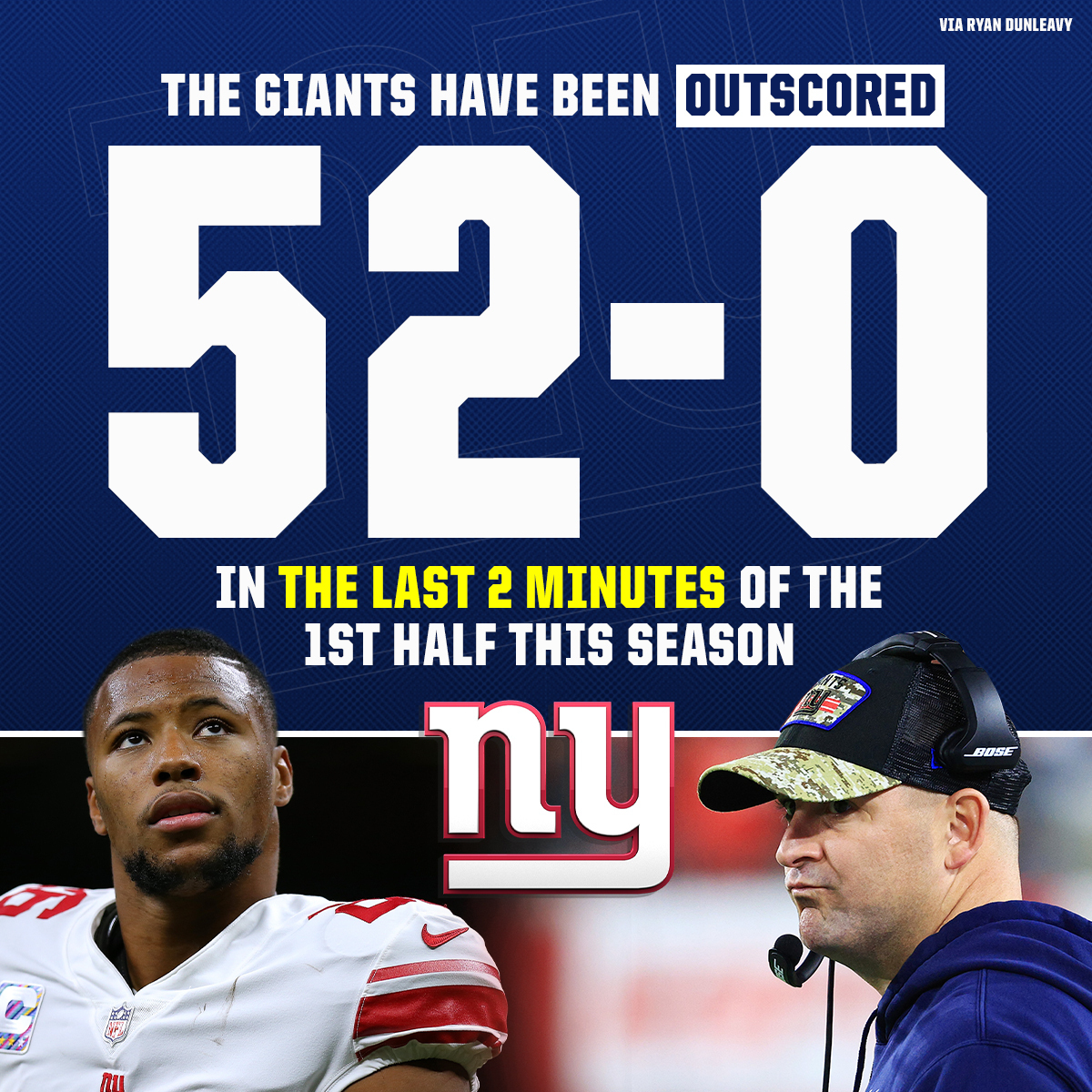 "You can never have too many pass rushers."


Completely agree. There is this misconception that this defense is elite.


The defense wouldn’t need to hold teams all game and make every stop if the offense could score 20+ points consistently. The offense does nothing to compliment the defense...defense holds a team in check or competes hard and the offense can’t make it interesting. Defense gets a turnover cue the 3 and out . The defense is a pash rusher away from being in that 5-8 range and maybe another linebacker .
.
Go Terps : 12/6/2021 12:15 am : link
Coming into today the Giants were conceding 23.0 PPG, ranking them 15th in the league.

Graham is a good defensive coordinator. I think he covers up a lot of issues with his scheme and what appears to be a philosophy of bending and not breaking.

This team loses football games primarily because the offensive personnel is terrible top to bottom. Getting to 20 points is a challenge for this offense, and that is untenable in the modern NFL.
I think graham shortens the game
GNewGiants : 12/6/2021 8:53 am : link
by forcing the team to methodically to go down field, and thats the only way the game stays close. We really dont give up big plays. Its usually 10-12 play drives by the offense.

I am not sure Graham is a great coordinator, but he is looking at the other side of the ball and saying we have to shorten the game or else it will be even uglier.
I thought the Dolphins were serially misfiring on offense in the
cosmicj : 12/6/2021 8:58 am : link
2nd half. They were taking turns making drive killing mistakes. If Tua and the receivers play as well as they did in the 2nd half as the 1st, we might have lost by four TDs.

I probably won’t watch the visit to LA next week. It’s going to be brutal.
I like Graham
bronxct1 : 12/6/2021 8:59 am : link
I really like Graham. It's been pretty obvious all year that the offense being bad has dictated how the Giants coach games. Graham has adapted to a system that can keep the game short and the scores low because we cannot score offensively. He can't afford to take chances and let up big plays or games would be over in the first half.

If this team could put points on the board I'd bet the defense becomes more aggressive. That's not something we'll find out this year.