Petit and Konz are gone with a new gm. douchbag or not, competent or not. A mew Gm will have his own "braintrust" for decision making.


It's remarkable that a professional reporter could be so mistaken about this fundamental fact of NYG ownership.

Comes down to laziness. John Mara goes to the owners' meetings and acts like an owner, so he must be the majority owner, right?

La Canfora doesn't offer an email address. Someone with a twitter account could instruct him on his error.

If you further informed JLC that John Mara actually only owns 4.5% of the Giants because he shares the Mara family's 50% with 10 siblings, and that Steve Tisch also shares his family's ownership with siblings, his head would probably explode.

Ernie Accorsi: "Just went through the whole thing, John. Everything is fine! You have a great foundation, just give it a few more years!"
...
SFGFNCGiantsFan : 1/8/2022 6:42 pm : link
It is so fucking said that Steve Fucking Tisch-who is out in LA- might realize how bad things are & Mara doesn't.

People on this fucking website know this organization needs a massive reboot & apparently the owner who runs the football side wants to promote Abrams & keep Judge, but probably won't because of the public reaction? JFC John. Are you THIS fucking dumb?
Tisch runs the business-MARA runs football
GiantsFan42 : 1/8/2022 6:44 pm : link
Football decisions will always be made by the family.
RE: LOL!
Eric from BBI : Admin : 1/8/2022 6:44 pm : link
In comment 15536168 vonritz said:


Tisch appears on the sideline, wearing a Superman outfit, accompanied by LT. After game, LT is announced as the new GM and director of football operations. Team proceeds to bottom-feed for another 10 years. At age 82, Tom Coughlin is brought in to right the ship. Ship sinks; NY Giants become the Meadowlands Redskins.
RE: RE: LOL!
SFGFNCGiantsFan : 1/8/2022 6:48 pm : link
In comment 15536208 Eric from BBI said:

The percentages aren't the deciding factor. Yes, he shares 50% with the rest of the Mara family. John is the one with the title. They do not have a conference call with all Maras on the line in order to make decisions. It's John's job. Tisch is involved in some things, not daily operations.
RE: RE: Steve Tisch...
FStubbs : 1/8/2022 7:33 pm : link
In comment 15536210 BMac said:


Understanding the actual ownership situation is pertinent for certain purposes. Issues are potentially being raised that go beyond how daily football decisions are currently being made.

For one thing, John is approaching 70 years old, isn't going to live forever, and succession plans have no doubt been considered. Understanding the actual nature of the ownership situation is pertinent to understanding where things are likely to go and who is likely to take his place.

Haven't seen a beat reporter demonstrate that understanding and JLC's mistake is significantly worse than average.
Here’s my analysis
eric2425ny : 1/8/2022 7:45 pm : link
The team sucks. Players, coaches, scouts, GM, and owners. Probably didn’t want to hear the last part of that lol.
If any of you go to this shitshow
SirLoinOfBeef : 1/8/2022 7:47 pm : link
of a game, just boo the whole time.

I don't know what it will do. How can we nationally embarrass Mara? That's what it'll take for change unfortunately.


Moreso they are up for promotions...
Ten Ton and Shyster and those others that recognize…
richynyc : 1/8/2022 9:13 pm : link
That ownership percentage, even being 50-50 between the Mara’s and the Tisch’s, gives us no inkling about what the operating agreement dictates as to operational control. My uneducated guess is that when Steve Tisch signed on as a co-owner 25-30 years ago with no football experience he may very well have agreed to a minority voice in football operations.

If and when the Tisch’s tire of of being affiliated with a loser franchise and they have no legal power to overturn the Mara’s in their operational control of the football operations, one might think they might want to force a sale of their 50% interest. After all, by several accounts the Giants franchise is one of the top five most valuable sports franchises in the world. Worth an estimated $4.5+ billion.

But then again, the devil is in the details. Often privately-held companies have buy-sell agreements with the party desiring to sell their interest granting their co-owners the right-of-first-refusal to purchase the selling party’s interest before offering it for sale to a third party. So if the Tisch’s wanted to sell to rid themselves of the the stench of Giant’s ownership while making a 10x profit or more, the Mara’s may well have the right to buy the Tisch’s interest should they be able to finance such an acquisition , and then the Mara’s would have regained total ownership and control of our beloved NY Giants football franchise.

I think Robert Tisch bought Tim Mara’s share 30 years ago - not Steve Tisch who inherited the deal is father struck. Robert Tisch was not an idiot in the entertainment industry, so I’m sure he retained enough leverage to request a thorough review of the organization at any time.
Upon further inquiry I see that Steve Tisch bought their family’s…
richynyc : 1/8/2022 9:42 pm : link
50% ownership of our beloved Big Blue in 1991 for $80,000,000. So we’re they want to sell their interest now it would represent not a 10-fold profit but more like a 30-fold profit, unless the team has been leveraged. But such an enormous LT capital gain might weigh in any decision by the Tisch’s not to sell, unless they gave offsetting capital losses. So maybe the Tisch’s hang in for a while more.

Then again, once one has perhaps made 30x their money on their investment, paying taxes on it to be able to save with face your NY and Hollywood friends without embarrassment might be worthwhile. After all, let’s face it, it’s not about the money for the Tisch’s at this point.
RE: RE: LOL!
Justlurking : 1/8/2022 9:48 pm : link
In comment 15536208 Eric from BBI said:


As Ivan15 says, it was Bob Tisch, the father who made the purchase. And he didn't leave his share all to Steve. Jonathan Tisch, Steve's brother who is on the NYG front office page as Treasurer, is also a co-owner.

And Charles Tisch, Jonathan's son, is on the FO page as a Football Operations Assistant. See link for fact that is an actual job.

Steve made himself very visible in the Eli benching crisis and John was evidently very concerned to appease his displeasure at the turn of events.

I don't expect anything drastic from the Tisches at this moment but I don't see why they would have agreed to legally restrict their rights as co-equal owners. 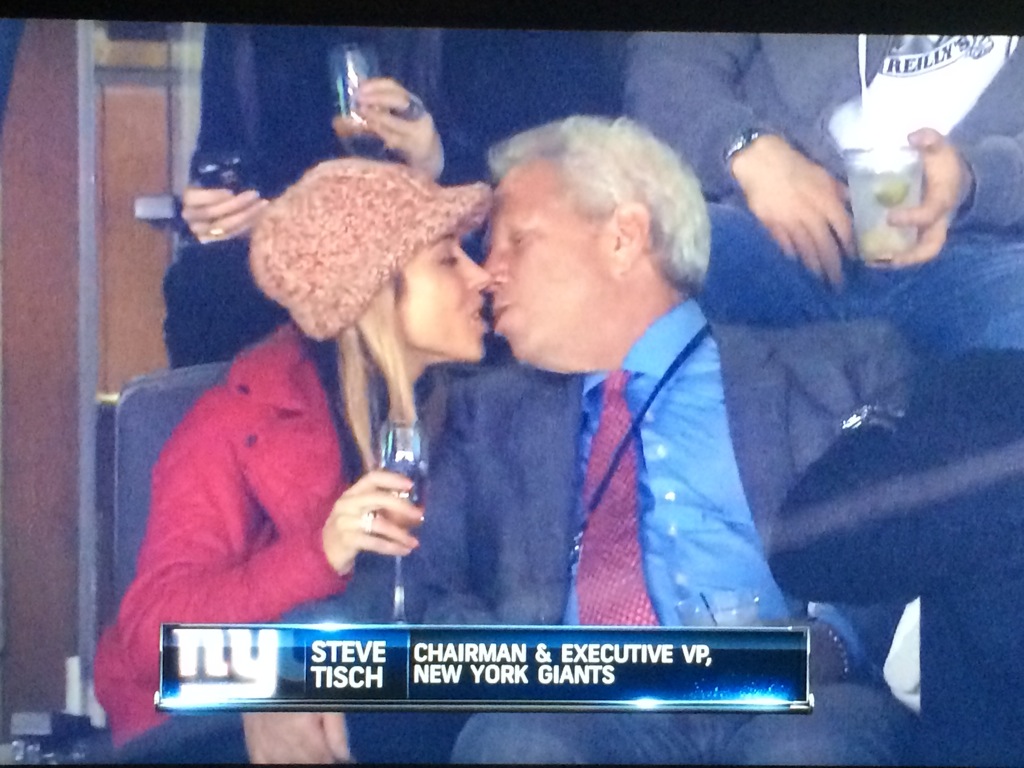 
Who gives a shit who he's boinking. If I had his money my dick would fall off. Rich guy getying laid by young tail, news at 11. Honestly, what he dips his wick in is irrelevant to what his influence is to the team, which I hope will be a powerful hedge to Mara's nepotistic operation.
I really don't understand why people keep posting that
Ten Ton Hammer : 1/9/2022 2:08 am : link
Photo of Tisch. Who gives a shit. John Mara is a choir boy. He sucks at his job but what a squeaky clean guy.

Bob Kraft got popped for soliciting hand jobs at a massage parlor. I wish Mara was that busy in his spare time. He'd stay away from football.
Rich older guy has young blonde girlfriend
Greg from LI : 1/9/2022 2:15 am : link
Film at 11.

The real point is that he doesn’t seem particularly interested in the team outside the additional revenue stream and investment. I think he lives I. LA and comes back occasionally. My understanding was with the last coaching hire he participated on zoom and not in person.
Tisch aside, a comprehensive review will take time.
Big Blue Blogger : 1/9/2022 6:06 am : link
One reason I wouldn’t mind Kevin Abrams or even Chris Mara as interim GM is that the organization is too FUBAR for a quick fix, and nobody currently in house is qualified to fix it, or even contribute meaningfully to a fix. Just assembling the necessary mix of management consultancy methodology and subject matter expertise will take weeks, if not months. Then that outside team will have to perform their assessment, develop a strategic plan, sell it to management, and recruit the right people for a complete rebuild.

All that ain’t happening before free agency. It might not happen before the Draft. And even if they could expedite the whole process without compromising quality, they will have missed the interview cycle for top front office and coaching talent.

The 2022 Giants will not be good. Even if they get lucky with injuries and random bounces, their ceiling is probably mediocrity. It’s fine with me if lame ducks like Kevin Abrams and Joe Judge and Daniel Jones and Saquon Barkley et al hang around for 17 games that will suck no matter who is out there getting booed. Those guys can live in the building while it is being renovated.

I would worry about a 2016-style false spring, but I think that’s wildly unlikely with a team this bad and no cap space
interim
fkap : 1/9/2022 9:24 am : link
could very well turn into permanent if John has any inkling of making it so. It's already reported that he wants Abrams, and rumors abound that he wanted Chris a while ago.

I'd rather have a GM hire, then let him spend a year evaluating and then let the bloodletting begin.

Has there been any/many interim GM beginning in the off season and on into the next year? It's one thing to have a mid-season temp replacement. Quite another to have one now.
RE: Tisch aside, a comprehensive review will take time.
Gatorade Dunk : 1/9/2022 9:29 am : link
In comment 15536763 Big Blue Blogger said:

Companies like McKinsey, Bain, BCG, etc. can perform a full 360 even in the midst of a teardown reorg. There's no reason to put an interim GM in place, especially if the candidates for that role are potentially a key element of the org review.
I agree with Gatorade
cosmicj : 1/9/2022 9:39 am : link
A consulting review not only could occur with a new GM in place, it SHOULD occur with him in place.
Who cares
HomerJones45 : 1/9/2022 9:40 am : link
another member of the lucky sperm club. His last "review" led him to side with Reese who was in the process of his "blame everyone but Jerry" tour which led to McAdope being named the head coach, $100 million spend on that boob instead of a guy that might know what to do with it and our current unfortunate circumstance.


no one gives a shit.

its still hilarious that in-game they cut to a shot of tisch and he's making out with some piece of ass 40 years his junior.

and some giants fans think tisch is the guy who is going to come riding in on a white horse and save the day.

Who cares if they want an organizational review
csb : 1/9/2022 4:54 pm : link
It’s about 8 years past due. The fact is that they’ve owned the team with the Mara’s for 30 years; just because they don’t have family members in the front office doesn’t mean that they are any less culpable than the Mara’s. They are equal to blame for this dumpster fire.
Pages: 1 2 <<Prev | Show All |