O’Connor:Giants are still getting bombarded by execs


Did Mara not say himself he did was not in favor of firing another coach after two years?

After the vote of confidence, there was a 6 game losing streak with 5 blowout losses and a string of public follies and Judge was still thrown a lifeline and hung on for two more days of meetings and deliberations and was talk of passing the can to a new GM to fire him.

So he did it, but it was about as fluid as yanking teeth out.


Yes, add this development to the never-ending list that proves the Giants skeptics are always wrong, and the Giants optimists always enjoy the last laugh.
since the judge firing its a pretty attractive job
mphbullet36 : 1/13/2022 11:11 am : link
assuming the Mara's don't meddle.

GM gets to pick his own coach

Build his own scouting staff

Basically has a blank canvas of a roster (not saddled with a QB and can decide who he wants).

There is some talent here.

To get 0 TDs from Golladay is ridiculous. Nothing in the red zone from Rudolph. 0 TDs from Toney.

Someone can step in here and get these proven commodities functioning to expected levels they'll look like a genius.
RE: RE: guys the fact is
Slowasski : 1/13/2022 11:14 am : link
In comment 15551049 santacruzom said:

If true, that's good news. But I was sold when I heard the list of candidates that are currently lined up for interviews! I am truly hopeful that this is the offseason that sets the franchise up for many years of success.
It’s the lead job…
Chris in Philly : 1/13/2022 11:15 am : link
of an NFL team in New York City with ownership that is willing to spend money. Anyone saying good people wouldn’t want the job is an idiot.
And believe it or not, injuries are a major factor
Chris684 : 1/13/2022 11:15 am : link
Who knew!?


Yeah, there are definitely attractive aspects, and the challenge alone is going to appeal to certain personalities, as will the potential opportunity to mold what's nearly blank slate to their liking. Getting people in the interview door won't be a problem.

Whether we're more favorable than another team when the time comes to consider offers is yet unknown.
Yeah, it's just brain-dead around here
David B. : 1/13/2022 11:18 am : link
Who would want to work in NY? The biggest market in the league. Who would want to work for a guy like Mara who sees the best in you (even when you suck), and tries like hell to find reasons to keep you and NOT fire you? Even when he should move on.

And though the personnel department and rosters are a mess that need fixing, the Giants still have a long standing rep as an organization that,once you're an employee,, the Giants try to do everything in a first-class way. Even if you move on. Once a Giant, always a Giant.


its not about the last laugh but it certainly is nice to see some of the same guys with the same lame hot takes be wrong on those things. sure there are posters here who are overly optimistic and im not saying thats the way to be but 9 times out of 10, give me the guy who believes in can happen versus the guy who says no way. believing is important.

that being said, i consider myself in the realist category. have i been wrong? of course. its life. but overall, i like to think im in the middle on pessimism and optimism
This job has challenges
Daniel in MI : 1/13/2022 11:21 am : link
For sure, but it also has a lot of attractive things in no particular order:

- despite recent events, this is still known as a class place to come with class ownership that are at the Rooney level of history in the NFL. That matters to football guys.

-there’s almost nowhere to go but up. Seriously. You could throw darts and do better. The comparisons will be easy, you’re not following a legend.

- you have a very chastened, almost desperate ownership group

- there’s a lot needed, but you have an OLT one of the hardest positions to fill. Get the OL up to average around him and they’ll look miles better.

- if you believe a better coach can get more out of these guys, you can look and see a roster with a few more wins in it now.

- win in NYG and you get a parade in the canyon of heroes, there’s nothing like that, winning here is winning on the biggest stage


Exactly!!! This is what's going on. Easy payday with no effort to just be a mouthpiece for Chris Mara
Some of you people…
Chris in Philly : 1/13/2022 11:27 am : link
live in an alternate reality.
Is there a confirmed interview with Hortiz?
arniefez : 1/13/2022 11:29 am : link
I hope so. The Ravens are amazing the way they keep plugging in the next guy and keep winning. I know they have a great coach. But he'll get to pick his coach.

I said this yesterday. These are New York F'n Giants. You come here and win a Super Bowl there's a good shot you're going to the NFL HOF.

The Giants have some talent in place. They also have some gapping holes and they have no cap money for 2022. But the 2023 cap situation isn't an issue at all and they have 5 picks in the 100 this year.


So like any other job in the NFL?
It is a very attractive job for GM candidates
Walker Gillette : 1/13/2022 11:48 am : link
as the Giants have shown patience with GMs. For coaching candidates it is not nearly attractive. The potential coaches who are in demand from other teams will really have to believe in the new GM and will have to get some assurances from ownership that they will be given some time as rebuilding the offense is going to likely take a while and the Giants have been going through too many coaches over the last few years.
Who knew?
section125 : 1/13/2022 11:52 am : link
I do believe letting Judge go was what tipped the scales for most of the "prime" candidates. Basically, a free hand. May lead to a VP/Director of Football Operations job if he builds a successful team.

I know shit from shinola, but Schoen and Horitz seem to be the cream. Love the Baltimore roots with Horitz. Cannot believe anybody had been a better GM than Ozzie Newsome was, so people that learned under him a likely well schooled. Schoen has built a nice team in Buffalo.
RE: And believe it or not, injuries are a major factor
BlueVinnie : 1/13/2022 11:55 am : link
In comment 15551065 Chris684 said:


The Tennessee Titans ranked 3rd in games missed due to injuries (336) behind the Giants 356. Those injuries included arguably the best RB in the NFL (D. Henry) and a top 5 WR (AJ Brown).

Maybe injuries don't have to be an excuse...if you have a GM and head coach that actually know what they are doing. Maybe you can even become the #1 playoff seed in your conference.

Wait, those two morons are still on?
some positives mentioned
Lines of Scrimmage : 1/13/2022 12:12 pm : link
already. Mara recognizes this is a project which is acknowledging the team needs a ton of talent added and probably a cleansing of many on the roster.

So the GM gets to
1. Pick HC
2. Has several very high draft picks 2022 and can maneuver as he sees fit. I think Mara involvement will be low the first two years waiting on results to jump in or stay out.
3. Free to unload any player. Mara spoke to that.
4. Can gut the team and stink and the fans will be happy getting a very high pick in 2023 and feel they have a plan.

Start of 2023 he has a young, talented OL with several impact D players and a top rookie QB prospect on year 1 of his contract.


Yup, I’ve killed this franchise consistently for the past 5 years. By finally committing to the tear down they have remedied lots of the ailments. The reality is the maras crave stability. This position is extremely attractive for a million reasons. Not the least of which is the fact that mild competence is a huge step up. If the GM has the ability to speak coherently he may be here 10 years
optimism today
Alan W : 1/13/2022 12:23 pm : link
accompanied by sound reasons.

Hallelujah!
Why not try to get an interview
Big Al : 1/13/2022 12:26 pm : link
even if you don’t think it is particularly attractive? Go in and see what they say on how you fit into this organization. Make yourself the interviewer. Probably won’t get the job with this approach and with all the candidates but what is downside of interviewing even if not currently that interested? Who knows where an interview might lead?
all this interest in the job
Enzo : 1/13/2022 12:40 pm : link
only makes their limited search 4 years ago look even worse. What were they thinking?
RE: all this interest in the job
Eric from BBI : Admin : 1/13/2022 12:43 pm : link
In comment 15551375 Enzo said:


They weren't thinking. John felt like he owed it to DG to hand him the job.

It's a huge win for fans if John Mara was sufficiently humbled by his failures that he has decided to quit the responsibility of handpicking coaches and GMs.
RE: Giants and Vikings jobs
Producer : 1/13/2022 12:53 pm : link
In comment 15551391 Sammo85 said:


I really believe that Mara thought that things weren't that bad and he had Gettleman sitting in his pocket as a guy that could quickly right the ship using the "Giant's Way" This was by far the worst decision he has ever made!
RE: RE: Giants and Vikings jobs
BigBlueShock : 1/13/2022 12:56 pm : link
In comment 15551416 Producer said:


This is an interesting thread from the archives of what BBI was thinking at that time back in Dec 2017. Some were seeing right thru the GM search nonsense...and many were not


You may have closed the book on Fields but many have not. He had some decent moments in what was an up and down rookie season.
Anyone casting judgements on fields
Ten Ton Hammer : 1/13/2022 1:14 pm : link
After one year is silly, even without the Chicago context. 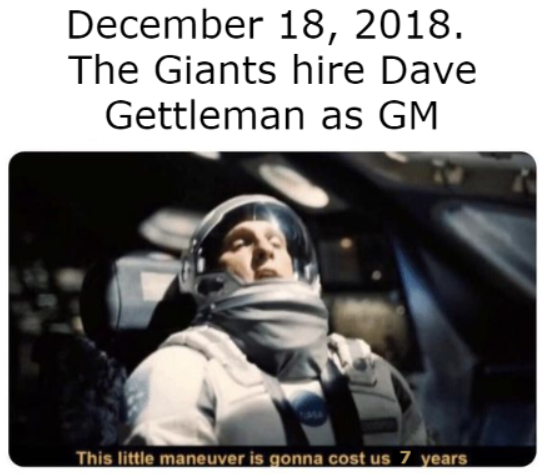 There is an enormous gap between “elite” and closing the book on him.


Completely agree, I've seen Fields make some throws this year that made me take a 2nd look. WAY too early to close the book on him.

I just think that a GM candidate might rather have his own choice at QB. A new GM in Chicago is going to have to give Fields next year at least, where here he can start fresh. I think that is appealing to most candidates.
RE: RE: RE: RE: RE: Giants and Vikings jobs
Producer : 1/13/2022 1:40 pm : link
In comment 15551493 BigBlueShock said:


You're just being argumentative. Fields obviously still has a high ceiling. it's why Chicago traded an extra first to get him. I don't really get your point.

I know there are those who believe this team is mostly void of talent. But IMHO, this team in spite of its performance and record in 2021,has a number of good pieces in place (particularly at the skilled positions) to the point if they draft properly (in key positions) they could show significant improvement next year.

As a GM looking to make a name for their-self, its not as bad a situation as some might believe. I would rather inherit this team than the one DG inherited.
these candidates
Ron Johnson : 1/13/2022 5:12 pm : link
want practice for their Chicago GM interviews
Pages: 1 2 <<Prev | Show All |