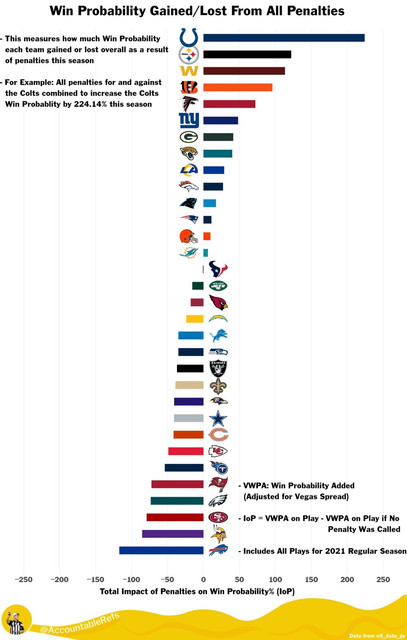 And that's with that awful game-losing penalty on the late FG attempt?

Most of the penalties I see against those two teams are in situations where it doesn't matter.

IE - It's 3rd and 15 from the Buccaneers 12 yard line and they get called for a false start. Okay, they weren't doing anything on that drive anyway.

That sort of penalty.
Shocking to see the Steelers near the top of the list.
St. Jimmy : 1/14/2022 7:12 pm : link
.
Something
Daniel in MI : 1/14/2022 7:56 pm : link
Is strange about this metric, a lot of bad teams at the top, a lot of good teams at the bottom. This suggests some kind of artifact causing an inverse relationship between their metric and winning. It could be something like if your team is bad enough a penalty gives them a bigger boost than a team capable of doing it on their own. Or good teams are more aggressive and Hager more penalties? I don’t know, but it’s a strange one.