Also all the play off teams seem to have very good tight ends.


Hurts was playing today, and was the QB for a team that scored 26 PPG.

But when he's good, he can really rack up the points. Which is the job description of the QB. To date, and I'm far from a Hurts advocate, Hurts is better at his job than Jones.

Still, Philly has a lot of thinking to do this offseason about their QB.
Both Hurts and Jones suck
GNewGiants : 1/16/2022 6:35 pm : link
Not wanting Hurts doesn’t mean Jones is good. Hurts is like every other running QB in the league…

Get up a few scores and enjoy the show as the “try” to throw the ball. RGIII, Lamar, Hurts… doesn’t matter.

Hurts has been playing with a better OL but Jones has had better skill players.


Hurts sucks. He’s not any better than Jones. He can run a little bit but he’s not near as athletic as Jones is.

The biggest reason the Giants suck is their shitty players. Jones is a shitty player.
RE: Hurts and Jones are really similar statistically
Thunderstruck27 : 1/16/2022 7:25 pm : link
In comment 15556253 cosmicj said:

No idea how anyone can read what I wrote and call it "trolling".


Sorry man, it’s inane to try and introduce that obvious context. Better to just pathologically inject Jones into every thread on the site.
Hurts blows with the passing aspect of playing QB
ZogZerg : 1/16/2022 7:35 pm : link
He runs well.
Hurts was exposed today...
moze1021 : 1/16/2022 7:51 pm : link
Even Eagles fans know and expected it..he can't make all the throws and when you get to the playoffs you need to


He beat Bridgewater, Trevor Siemian, Jake Fromm, Garret Gilbert, Taylor Heineke (barely), Jared Goff, Zach Wilson, Sam Darnold and Matt Ryan on opening day. His teams always get off to “slow starts” and eventually the elite Offensive line overpowers the tired defenses because the defenses are out there all game with the three and outs with those non-nfl starting type QBs
RE: RE: Hurts is not an NFL quarterback
GNewGiants : 1/16/2022 8:29 pm : link
In comment 15556752 GMen72 said:


Pretty sure you got it backwards. The eagles took Hurts to the playoffs and ultimately shit the bed.

Hurts is late on every throw he makes. He doesn't anticipate the top of the route and if his receiver is not wide open the defender has an excellent opportunity to make a play.

If not for Hurt's legs, he wouldn't be in the league.


Devonta Smith needs a QB who can make all the throws and Hurts can't do it. They have the three first round picks that are potential trade bait for a Russell Wilson or Deshaun Watson, both of whom can make all the throws. If Eagles go with a QB in this draft there's no guarantee anyone from this draft is better than Hurts; that's how weak the QB class is
I think both Philly and Wash would trade their QBs for Jones
BillT : 1/16/2022 10:10 pm : link
Because they know for certain their QBs will never take them anywhere. Jones may not either but they could hope. Better than knowing they’re going nowhere.
Prescott is the only legitimate starter in the division
Jerry in_DC : 1/16/2022 10:18 pm : link
Big drop-off then I'd take Heineke 2nd because he has some clutch and improv ability. Jones and Hurts are pretty close. Both are good backups and bad starters.
But I don't know if it's worth arguing about
Jerry in_DC : 1/16/2022 10:34 pm : link
Both guys suck as starters. It's kind of dumb to argue over which team's scrub is better. Nobody is ever like "Will Hernandez is so much better than [insert other scrub OG]"

We just say Hernandez sucks and we need a better player. Sure there are other RGs who suck like he does, but it's not all that important to rank them.
Philly wasn’t calling
cjac : 1/16/2022 11:23 pm : link
The type of plays they usually do because of Hurts ankle


This is where I'm at. If Jones is on the Eagles, they win more than 9.

I've watched Hurts 4 times now, and he's looked no better than Jones every single time. Jones will probably have a long career as a solid backup in this league, but that's an absolute draft failure if you're drafting him 6th overall.
Hurts may be the worst thrower
Giants73 : 1/16/2022 11:57 pm : link
Of the football in the NFL. Prescott has been gifted a great supporting cast but is a loser. 40 million a year and the team would be light years better with Tannehill. NFC East does not have a real QB.
RE: RE: RE: Hurts is the worst QB in
Thunderstruck27 : 1/17/2022 3:21 am : link
In comment 15556720 GMen72 said:


Based on? Did jones even light up hid his high school league?
Yes
djm : 1/17/2022 1:39 pm : link
I’m sure the giants would be better if hurts moonwalked into this 2021 ready made nfl offense here with the giants. Same with garoppolo. All our troubles just go away. Hurts here with the giants means we’re the ones scoring 26 garbage time pts in the playoff game yesterday.

When you guys dig in your heels it’s truly a sight to behold.
Since the Giants have gone to shit,
Go Terps : 1/17/2022 6:14 pm : link
the "If X was on some other team instead of the Giants he'd be better than Y" argument has been all over the place on BBI. It's not a good look.

If you want to live in the real world and find out what Hurts, Prescott, Jones, or any other player actually are...just go to the site linked below.
No excuses, no bullshit - ( New Window )
Actually I think going by how they played this season, Hurts and
PatersonPlank : 1/17/2022 6:19 pm : link
Jones are about even. Hurts was drafted in Rd 2, so he's a better deal, but they both do a lot of the same things. Jones on Philly would have been the same, still in the playoffs, IMO.


I like QBs who step up in big pressure and can actually throw the ball against good teams when playoff time comes. 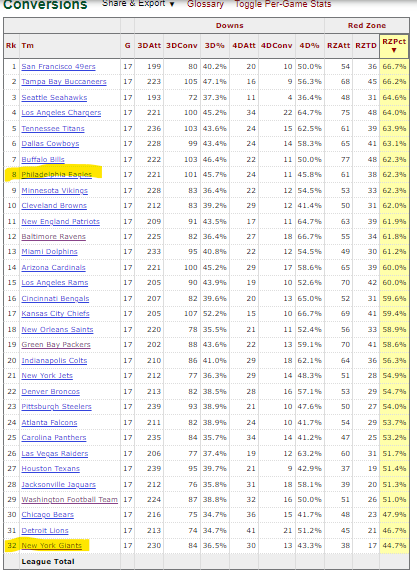 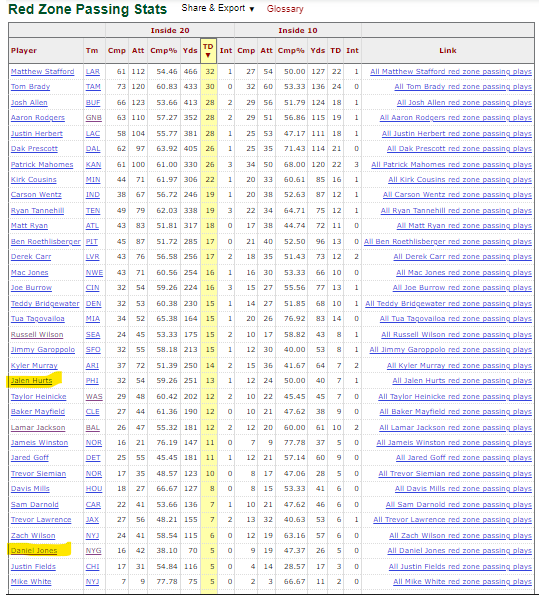 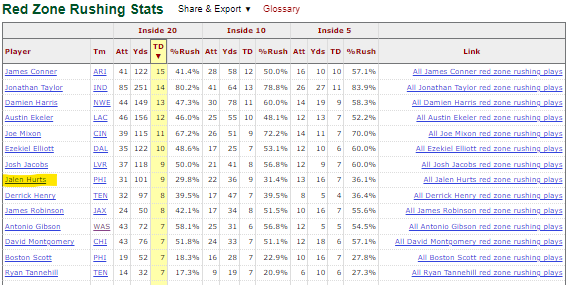 
I'm not a Hurts guy for the reason you mentioned. But he can find the endzone. 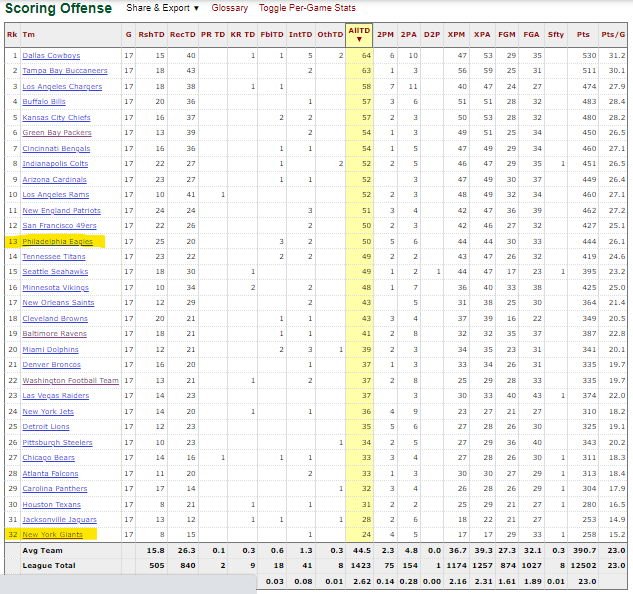 
But it would be like climbing Everest with him behind this OL. And throwing to a mental midget like Engram. That is the entire point that you are shitting on.

You want reality, I posted it above.
The fact Terps believes Hurts
GNewGiants : 1/17/2022 9:34 pm : link
Would make this offense watchable and scoring 25-26 PPG is hysterical.

And let’s not act like 26 TDs in 15 games is some great number either. The Giants incompetency has brainwashed our fans thinking what others QBs are doing is great. When I’m fact, it’s pretty ordinary.

Hurts blows. And people thinking he would make our offense something anything more than average is just fooling themselves. Hurts behind thisnOL and injured WR core would be a comedy show like we watched this year.
I'm not asserting anything
Go Terps : 1/17/2022 10:03 pm : link
I'm showing you the difference between the performances of the two players. It's not a small difference.
RE: RE: RE: RE: Philly finished 12th in PPG...
bw in dc : 1/17/2022 10:06 pm : link
In comment 15558599 GNewGiants said:


I hope your first paragraph isn't directed towards me. I never said Hurts was "great", and think Philly needs to consider other options going forward.

Compared to what Jones "produces", however, 26 TDs is great.

And let's be honest, Philly doesn't have top tier offensive weapons either.

I agree, btw, Jones didn't have preferred pass protection. But I also believe Jones doesn't do nearly enough to offset the team's deficiencies.


Ok, and yet again, I am not debating the difference between the performances of the two players. I did not bring up Jones. I am not arguing Jones is good or better. I am simply arguing Hurts is not good. You keep injecting Jones because the comparison makes if useful for your argument that Hurts is a good player, when really all it shows is that he has better stats than a player that is not part of the debate. Carry on.
Hurts trying to make plays behind our OL
dpinzow : 1/17/2022 10:09 pm : link
would be an unmitigated disaster. He'd probably get hurt multiple times running for his life
Well the results for Hurts this year were alright
Go Terps : 1/17/2022 10:16 pm : link
Playoffs, 26 PPG. That's not someone that can't play.


Eagles will definitely be in the Russell Wilson trade talks at some point. They have to know Hurts won't get them any further than he did this year. Devonta Smith was running wide open pretty much every game and Hurts never got the ball to him
Hurts is not good
Jerry in_DC : 1/17/2022 10:50 pm : link
He's actually OK for an extremely low ceiling offense with a good OL. Basically what the Eagles have. But thats all he is.

And the Eagles are not good. They pretty much had zero chance to win a playoff game. And they're obviously by far the worst NFC playoff team. If you simulate the season 1000 times, the top 6 would make the playoffs a lot. The Eagles would not. QB is their biggest weakness.

They beat up on trash teams/QBs down the stretch of the year - they are not built to beat good teams.
It reminds me of that Tebow year
Jerry in_DC : 1/17/2022 10:55 pm : link
when the Broncos made the playoffs. I'm sure Hurts has better passing #s than Tebow, but it has a similar feel.
Hurts has been a winner…
trueblueinpw : 1/18/2022 12:36 am : link
Something Jones has never been. I was surprised how poorly Hurts threw the ball against Tampa, but he got his team to the playoffs.


What a shock! you conveniently ignore the stark difference in offense talent between what Jones has s the other QB’s


Once again, you fucking ignore the talent each has…


You keep saying I have a narrative. What's my narrative?
It's not true that Jones had no talent to work with
Producer : 1/18/2022 2:41 am : link
They got him Kenny Golladay who is a known quantity, and he couldn't get him the ball.

That's on Jones. He's garbage. And to try to compare him to Dak is an insult to our intelligence.