Of note is Matt Corral being mocked at #6 to Carolina. A few thoughts:

(1) If the Giants new GM/HC want a brand spanking new QB, then Matt Corral IS the guy IMO;

(2) If they don't want a QB, maybe the Giants #5 becomes a very, very valuable chip in the game;

(3) If Carolina wants to increase their odds of snagging their QB, then a flip flop with our 5 makes a lot of sense;

(4) Or maybe Washington and Denver seek to jump over Carolina into the 5-hole.

Link - ( New Window )
Seems high for Linderbaum but I’ll take it
illmatic : 1/17/2022 2:24 pm : link
Fix the OL.
This is crazy talk...
BigBlueJ : 1/17/2022 2:24 pm : link
Why would you EVER use both of these picks at their current value positions to select players respectively. I promise you the next competent GM is trading one of these picks, maybe both, to hoard assets for 2023 (The real QB draft). This is the dream scenario, and you can still build out your offensive line later in the first round and day 2/3. Remember, you have already solved the most difficult position on the oline. LT = Andrew Thomas. Any competent front office can fill in the other positions.
I’d be fine with this.
Keaton028 : 1/17/2022 2:25 pm : link
Fix the lines. Also, wouldn’t mind Edge or QB in one of those spots.
BBI will be like
LakeGeorgeGiant : 1/17/2022 2:28 pm : link 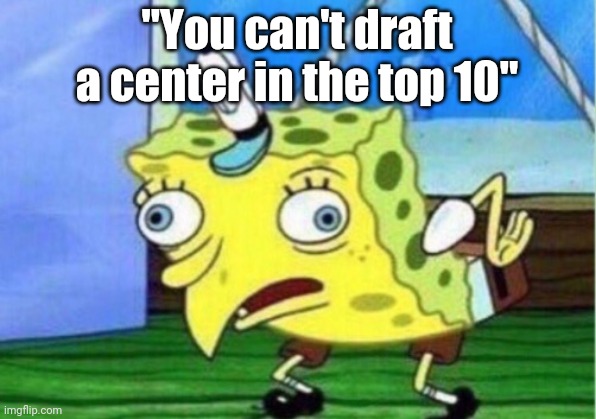 
Exactly
This is a difficult trade year
DavidinBMNY : 1/17/2022 2:30 pm : link
The consensus is there are less blue chip players this year but overall a deep class particularly at te, s , edge and lb.

I personally think that 2 OL are fine in rd 1, but I’m not sure those 2 are the best. Linderbaum is a pure center ansd Neal is not an LT in the nfl.

Neal or Cross at 5, Linderbaum at 7 and Zion in the 2nd

-Hire competent coaches to coach up picks made in rounds 2,3,4+. Everyone else does it!
-It's a misuse of draft capital, you leave higher graded players at other positions on the board
-You'll end up with wayyyy too much cap space dedicated to the O line when you resign them all (or worse, when you don't)
if KT, Hutch, or Neal are gone by 5
mphbullet36 : 1/17/2022 2:42 pm : link
I would very much be fielding calls for #5. Maybe a team wants to jump the panthers for the 1st QB off the board.
The NFL Does NOT Value Centers That Highly
Jim in Tampa : 1/17/2022 2:46 pm : link
I posted this on another Linderbaum thread, not as my opinion, but as a fact.

Think about that for a second.

That means every GM on every team in the top 10 for 53 straight drafts saw better value in other players at other positions.

Hopefully the Giants don't break this trend and they pass on Linderbaum for one of the many players that are a better value.

I wouldn't be disappointed if the Giants took Evan Neal at 5 and Charles Cross at 7. I know some would be puzzled by going OT with both picks but I would play Cross at RT and move Neal to LG. I think Neal could be an all-pro guard plus he would provide incredible value as he can also play OT. If Andrew Thomas or Cross are injured then Neal could move outside without a drop off in play.
RE: I’d be fine with it
Jay on the Island : 1/17/2022 2:53 pm : link
In comment 15557920 jeff57 said:

It would be incredible if the Giants landed both Neal and Okwonu in round 1. Many scouts believe that Okwonu is a better fit at guard where he could be one of the best guards in football. Players like Okwonu are even more valuable because of their versatility. If Okwonu struggled at OT he can still provide value as a quality guard.
Cant take 2 OL
Snablats : 1/17/2022 3:06 pm : link
When you desperately need a front 7 defensive playmaker. And you shouldnt sit at 5 and 7 since there are several OL 1st rounders this year. Trade down with one of the picks if you can

Ojabo is an athlete trying to play football. Completely disappeared vs UGA. You would be hoping he develops in a few years. No thanks. Give me someone who produces for sure now, not hoping to develop because he is an athlete
I like Neal. Like Ekwonu. Love Cross.
j_rud : 1/17/2022 3:07 pm : link
I don't know about Linderbaum. I haven't seen a whole lot of him. 290 seems pretty light but then again Jason Kelce has been one of the best in the business for a decade. If you think he's that kind of player obviously you take him at 7. On the flip side, you'd essentially be calling him the best C prospect in the history of the draft.

I understand being enamored with taking 2 OL given the state of the team. But there are needs up and down the roster and likely to be better players available at 7. Personally I'd rather go with Hamilton at 5 and hope one of the OTs is available at 7. If not there's still no reason to panic, the draft is deep at the position and they have a lot of day 2 picks to play with.
RE: Linderbaum isnt going at 7
BigBlueBuff : 1/17/2022 3:09 pm : link
In comment 15557886 Snablats said:

The Giants do not have a #1 receiver. It's down the list but if that's the BPA I hope they don't force someone like Dexter Lawrence or an OL who is an average starter that could have been filled in the later rounds.

Thomas was the #4 pick and will need to be paid. Grab a bookend for him and fill in the middle with good but cost effective players. Good teams don't need 3 top 10 picks to make a good OL. I think the Giants need more power and speed on the defensive front almost as much as they need OL.
The Kelce to Linderbaum comparisons need to stop
Sy'56 : 1/17/2022 3:15 pm : link
They aren't similar at all.


If Thibodeaux and Hutchinson are gone, there are front 7 Ds better than the OL we’re talking about. Some may say Karlaftis, but I’m not so sure especially if the Giants stay in 3-4. But there are several good front 7 players who will be available on day 2.
RE: The Kelce to Linderbaum comparisons need to stop
j_rud : 1/17/2022 3:31 pm : link
In comment 15557979 Sy'56 said:


No, Linderbaum is ahead of Jurgens. But the skill set Jurgens plays with his closer to Kelce if you are looking for the athlete at that position.

I have a very fluid stack system right now. Still have a ton of all-22 to grind through. Getting hours in every day though.

There may be some changes with who I work for soon...so it is possible how quick I pump put ranks/stacks will be sooner. The combine and pro days are needed for my final grades though.
RE: The NFL Does NOT Value Centers That Highly
shyster : 1/17/2022 3:43 pm : link
In comment 15557918 Jim in Tampa said:


I had to look up who that was.

Johnson played for a decade without making a Pro Bowl. There were seven future Hall of Famers who went later in that draft.

My feeling is the Giants need a guy like Dean in the middle of the field - sideline to sideline, incredibly smart, incredibly fast. He is who I want at 5 or 7, with a trade down in 1st round to take an OL. Who in the 2nd or 3rd round is Dean? Maybe Christian Harris at the top of round 2, but what if he doesnt make it to the Giants pick?
RE: RE: The NFL Does NOT Value Centers That Highly
Bill in UT : 1/17/2022 3:56 pm : link
In comment 15558015 shyster said:

Linderbaum could be Richburg all over again. I didn’t come to that conclusion on my own, but heard that theory on one of the thousand podcasts I listen to. Maybe Skinner?
Cross who is who sounds the best to me
Giantimistic : 1/17/2022 4:29 pm : link
I have only to go on what I read here, but I want two tackles that can play left or right tackle.

We talk of being set with Thomas because he is excellent, which is true, but what happens if he gets hurt--there goes any chance of a season.

I want two top tackles and a guard that can swing out to tackle like we had with Diehl.

Not only do we need to build a solid 5 on oline, but we need a solid 8. They will all play in the course of a season.


Damone Clark of LSU and Chad Muma of Wyoming are two others. And I like Devin Lloyd better than Dean.
My ideal scenario
Matt M. : 1/17/2022 4:37 pm : link
is we trade down one of those picks and end up with Cross and Linderbaum. I don't want to hear about positional value. We have 4 black holes on the OL and outside LT OC is probably the most difficult to fill via draft or FA. Both Cross and Linderbaum would start from day one and Linderbaum is the best OC we would have had since O'Hara. Who would they add who would be better?
RE: RE: RE: RE: Cant take 2 OL
Snablats : 1/17/2022 5:46 pm : link
In comment 15558066 jeff57 said:

Neither one is close to Dean. I liked Lloyd better than Dean until the bowl games. Lloyd looked like Crowder while Dean was everywhere against Michigan and Alabama
RE: RE: This is crazy talk...
PatersonPlank : 1/17/2022 6:24 pm : link
In comment 15557890 Mike from Ohio said: