Giants: Most Injured Team Since 2009 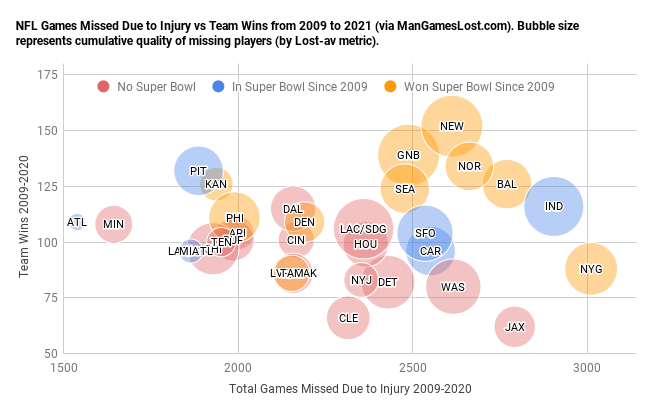 Ah, remember all of the years on here
Dave in Hoboken : 1/20/2022 11:55 pm : link
being told mostly by posters who no longer post here that the Giants "aren't anymore injured than any other team in the league."


Ronnie Barnes is yet another symptom of the gross nepotism within this organization. He's being inducted into some local hall of fame. Other than tenure, I'm not sure why.
Yes, another big problem that needs addressing
ZogZerg : 1/21/2022 6:50 am : link
.
Training center
Bryanjints : 1/21/2022 6:55 am : link
Giants new training center opened in 2010. We've been cursed ever since then.
Don’t get some of the comments here
BillT : 1/21/2022 7:42 am : link
The Giants use the same turf as half the league. The Giants docs come from HSS a top five orthopedic hospital in the country. Blaming injuries on the trainers never has made any sense to me. This is just “things went wrong so we need to blame someone”. Sometimes things just go wrong.
RE: Don’t get some of the comments here
TroyArchersGhost : 1/21/2022 8:02 am : link
In comment 15563735 BillT said:


This is not random chance. Saying there's no problem is really burying your head in the sand and doing the fans, the organization, and most of all, the players, a huge disservice. I am sure the new GM will take a serious look at this data and figure out a plan for lowering the injury rate and not just saying there's no problem here, because there clearly is.
RE: RE: Don’t get some of the comments here
BillT : 1/21/2022 8:09 am : link
In comment 15563759 TroyArchersGhost said:

Every team in the league studies injuries. Every team takes that seriously including the Giants The Giants have had brutal injury issues no matter the turf they used or the trainers and doctors they hired. They’ve also had years of healthy teams. Happens all over the league.
What is Atlanta and Minn doing?.....also turf
George from PA : 1/21/2022 8:10 am : link
.
RE: RE: Mara witch doctors and trainers on the payroll
Dnew15 : 1/21/2022 8:11 am : link
In comment 15563680 Eric from BBI said:

No surprise it has led to many injuries...
It has been fashionable
River Mike : 1/21/2022 8:29 am : link
on BBI to pooh pooh injuries as a reason for a poor W/L record. "Every team has injuries!" they say, which is true, but the injury totals and impact are NOT the same. I never bought into that. Are some teams better than others at handling that? Sure. But they take a toll that can't be denied. The fact that the most injured team has the worst record should come as no revelation to anyone.
The surprise for me
Pepe LePugh : 1/21/2022 8:46 am : link
is that the majority of SB teams are among the most injured.
Strength and Conditioning coach
I Love Clams Casino : 1/21/2022 9:23 am : link
The data isn't there, but I would bet that the 2 years the Giants had Aaron Wellman as their S&C coach, the injuries went down significantly, and they went up significantly once he left.....Giants need to get that guy back....I am pretty sure that wherever Wellman goes, the injuries go down
Anyone who thinks bad luck hasn't been a part of this
Chris684 : 1/21/2022 9:38 am : link
is kidding themselves.

They've had a bunch of career killing/altering injuries both on and off the field to players who were lined up for long term roles.


I think there are a number of issues at play here.

As suggested above Training and Conditioning is likely subpar

Also as suggested above, individual players getting beaten likely puts them in more awkward physical positions which is more likely to lead to injury. It seems like we tons of WR injuries, which may be related to poor QB play putting the ball where it is leaving the receivers vulnerable

playing on a losing team, players are more likely to make a business decision rather than push themselves to get out there for the games

Ty Siam! This is supposed to be hi analytical expertise. "A rising star" we were told. Most of the Giants analytics have focused on health and training of players. Working back from results, it would appear the Giants efforts here are subpar as well.
RE: These muthafucka embedded images in a muthafucking OP
Osi Osi Osi OyOyOy : 1/21/2022 10:56 am : link
In comment 15563620 adamg said:


I was going to comment how Reddit and other places seem to rank our turf as one of the worst in the league, but the fact that the Jets are mid-pack makes that excuse less reasonable.
RE: Anyone who thinks bad luck hasn't been a part of this
Pepe LePugh : 1/21/2022 2:56 pm : link
In comment 15563951 Chris684 said:


Can't rule out a combination of the turf, medical, and strength staffs. Maybe the Jets would be ranked higher if not for the turf. Hard to say definitively but this goes beyond random chance.