It's more complicated than that. It was clearly pretty effective early on and has since seemed to peak or fall off in effectiveness. Note with image below, Rooney rule effective in 2003 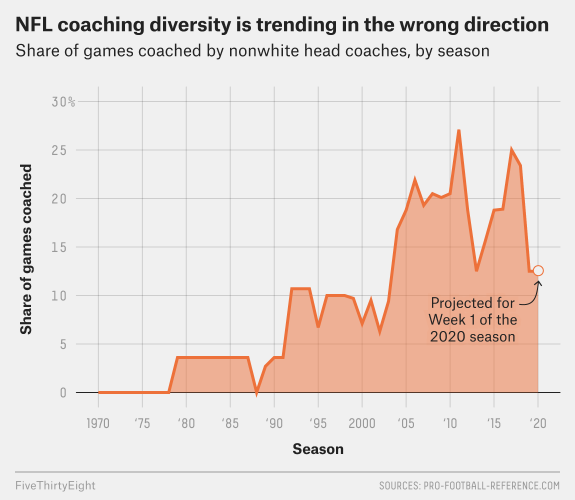 
I suppose you're right. Caldwell would be an interesting hire. Not interested in Harbaugh.
Thanks for pointing this out
Lines of Scrimmage : 1/24/2022 3:39 pm : link
Right now the NFL has one black HC. The rule is not working and a big part of it is they need to thing more long term imv.

Mara is on the committee. I do believe the Giants HC will be merit based but I believe Mara is aware that his franchise is amongst the last of the older franchises to not have a minority HC.
The video thing seems like a silly distinction.
Mad Mike : 1/24/2022 3:41 pm : link
Maybe normally one could view a video interview as less serious than in-person, so you'd require it to be in-person to "count", but for the time being it seems that should be waived. And even ignoring COVID issues, when you're interviewing guys who are still alive in the playoffs, like Frazier, that makes it harder to arrange in person meetings. Regardless of the merits of the Rooney Rule, this aspect of it seems unduly burdensome.
If the upper crust
fkap : 1/24/2022 3:44 pm : link
works with minorities on a regular basis, which they do, and still thinks they're unfit for being a head coach or GM, any forced interview is just going to be going through the motions to be in compliance. I doubt latent racist/old boys club Joe White is going to come out of an interview with any more of an opinion than when he went in.

Maybe the rule has had some impact. It's not really all that much of a nuisance. In this case, Daboll could be hired in all but name, and is rounding up his team as we speak. Every search includes a bunch of candidates unlikely to be hired, but who are interviewed for appearances. So what if a couple of those are forced to be of color? There's no limit to the number of interviews that are held, so it's not like some other candidate is left out because of quota. But, from my cheap seats, I don't think the Rooney Rule is all that necessary any more. It served its purpose of highlighting the need to consider minorities, and now it's just a box that needs to be checked, but isn't likely to change any results.
It's probably gonna be Daboll. Let's be honest.
Dave in Hoboken : 1/24/2022 3:44 pm : link
Considering the lack of inspiring candidates, I'm okay with that.
I wonder if Daboll would consider Flores as a DC,
Simms11 : 1/24/2022 3:45 pm : link
if Flores is not offered any HC jobs?!
RE: ...
Platos : 1/24/2022 3:48 pm : link
In comment 15572265 26.2 said:


no because guys like michael silver keep crying about the hires and fires. until everyone hires a black coach and never fires them it will always be an issue.

black, white, whatever, these owners are a good old boys network and it extends into college alumnis.

best chances for these young coaches to get a shot is be really good at coaching and have some connections.

There's always a tension between wanting experienced people who can hit the ground running, and wanting to diversify your workforce. If you prioritize experience, you are always going to be following the hiring practices of 10, 15 or 20 years ago. You never get diversification that way. If you want more minority candidates, you have to be willing to hire some people who seem to be talented but are demonstrably less qualified, and then train them up. Knowing that some of them will fail.

If you are trying to diversify your workforce, you have to take chances on people. Otherwise you are always going to be a prisoner of old practices.
They should interview
Biteymax22 : 1/24/2022 3:58 pm : link
Byron Leftwich. Nothing regarding the Rooney Rule, they should just interview him. I think he's a really good candidate we should be looking at.
I don't have reason to think the Giants are a racist organization,
81_Great_Dane : 1/24/2022 4:04 pm : link
but they've never had a Black QB as a regular starter (Geno Smith is the only black QB to start a game for the Giants, right?) and they have have never had a black HC. It looks bad. Yes, they've had a Black GM. They've had black DCs. They're still an outlier.

I don't know these people, I am way, way on the outside, just reading the tea leaves. I think it's less a matter of racism ruling people out than nepotism and cronyism off the field ruling too many mediocrities in. There may not be any racist intent, but the effect can be largely the same.
81GD
Lines of Scrimmage : 1/24/2022 4:24 pm : link
I would not subscribe to how corporate and I did not say what my long term plan is. I have experience working this very issue and saw a lot of the pitfalls and subsequent strategies that helped improve it.
RE: Thanks for pointing this out
k2tampa : 1/24/2022 4:29 pm : link
In comment 15572321 Lines of Scrimmage said:


It needs to be looked at in its entirety. When the rule was put in place there were 2 minority head coaches. The number went to 3, then 5, then bounced between 6 and 7 for six years, then went to 8, back to 6 and 4, then climbed three out of five years to get back to 8 in 2017. Then five black head coaches were fired after 2018. And now there is just one after Flores was fired. So in the first nine years the rule was in place, the number of black head coaches quadrupled. But five were fired in one year, leaving the numbers right back where they started.

You have to remember two things: Coaches get hired to get fired, and the majority of coaches who get fired get fired after a couple of years. So over 15 years you had a plus 6 (there were actually more than 6 hired) in the number of minority coaches. Then you had five get fired in the same year.

To say the chances for blacks to be head coaches hasn't improved is wrong. Is it still equal? No. And it probably never will be because you are dealing with multi-millionaire and billionaire white guys doing the hiring.

Nothing is going to result in half of the NFL head coaching jobs going to minorities (heck, even adding a draft pick at the end of the first round probably wouldn't do it). But the rule has increased the profile, and experience, of minority candidates. When the rule went into effect you had very few black coordinators. Those numbers have risen greatly (can some of that be attributed to GMs getting to see them during interviews?). That creates a bigger pool of minority head coaching candidates with experience one step away from the top job.
I understand what they are trying to accomplish
Beer Man : 1/24/2022 5:50 pm : link
with the Rooney Rule, but it has to be somewhat demeaning to some of these coaches who are given a courtesy interviews just for show. Hypothetically, lets say Bill B. leaves the Patriots, and Schoen says I want the GOAT leading my team. Would you want to waste your time on an interview just to satisfy the Rooney Rule knowing that the team had probably already made their decision to go with the GOAT?

According to the above graph
Bill in UT : 1/24/2022 6:15 pm : link
every year since 2003 has had more minority HCs than any year before 2003. I can't say if the Rooney Rule is cause or correlation. To say it's trending in the wrong direction is a stretch- there was a prior peak and valley, this could be no different than that.
Lol Rooney Rule and points used in the same sentence
fanoftheteam : 1/25/2022 6:07 am : link
+ the rule where if you get poached a black cosch you get drsft picks. Black people are currency in the nfl - oh the irony of the NFLs initiative and the dystopia that is 2022
The last thing we need is for Mara to hire a minority...
EricJ : 1/25/2022 7:34 am : link
for reasons at all tied to the Rooney Rule. This franchise is at rock bottom. We need the best coach possible for the team regardless of race. Once it begins to enter the conversation when making a decision... it is over.
RE: I don't have reason to think the Giants are a racist organization,
bebopson : 1/25/2022 9:22 am : link
In comment 15572392 81_Great_Dane said:


they seem to have a soft spot for irish catholics.
Perhaps we need a Rooney Rule
Grizz99 : 1/25/2022 1:24 pm : link
For cornerbacks where whites are severy under-represented.
Meantime, some 20% of coaches are black - or about the same ratio as the general population.
I conclude that the intent is no longer equal representation but unequal representation.
Meantime, the players are 85% black or 400 % the ratio of the general population. So maybe tdd this is where we should be looking to making things equal.
RE: They should interview
Milton : 1/25/2022 5:35 pm : link
In comment 15572376 Biteymax22 said:
Why? I liked him as a QB but he's another coordinator (like Eric Bieniemy) who is running the head coach's offense. How can any of us have a clue what kind of candidate Leftwich is when his head coach is Bruce Arians and his QB is Tom Brady?
RE: If Josh McCown...
Mook80 : 1/25/2022 5:45 pm : link
In comment 15572271 Chris in Philly said:

They could give an extra 1st round pick to every team with a black coach. The could have every team that fires a coach draw a card to determine the race of the next coach.

Lots of ideas - no bad ideas in brainstorming