And this is not a slight on Fox. He's a fantastic player. Makar is better. Like I said it's like Peyton vs Brady, there is no loser in the contest.

And I hardly think feeling Makar is a better player is a contrarian view.

When Igor starts, the Rangers are allowing more than 1 goal LESS than expected based on his play.

Igor is on another level right now. 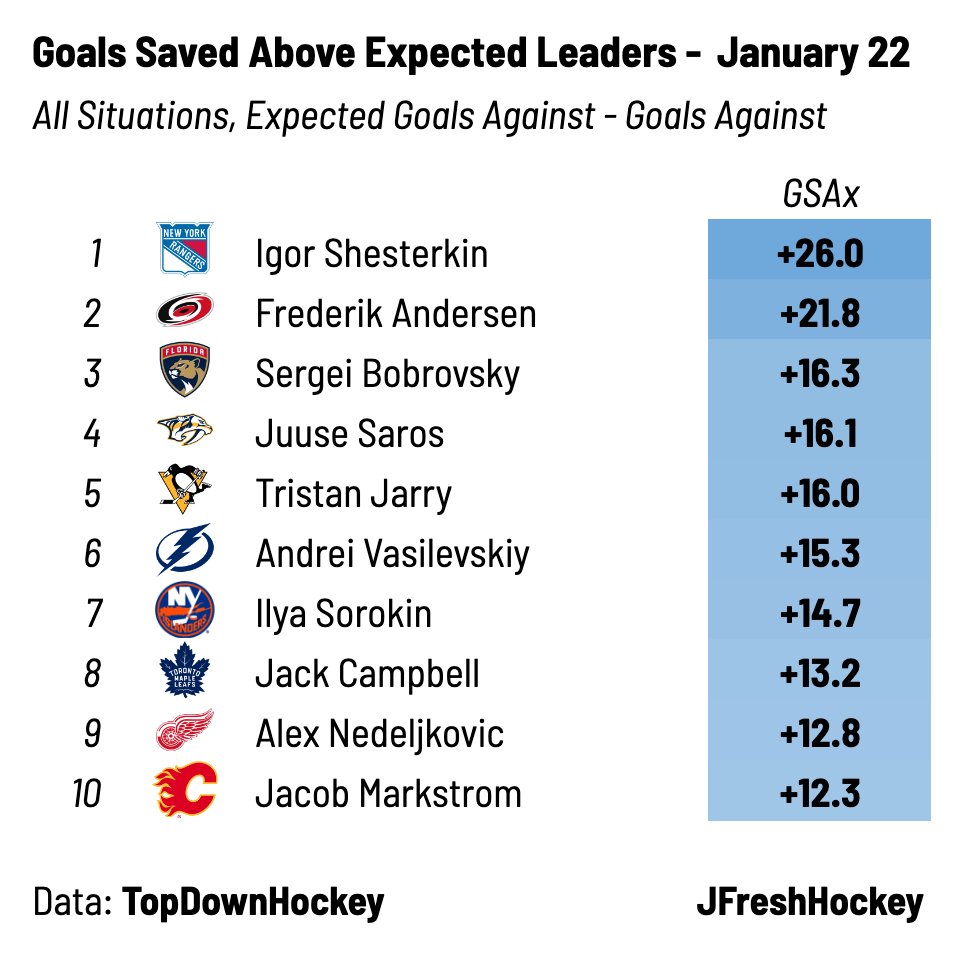 
yep, Sorokin is really good, and getting better after a slow start to the season (he's been lights out in January), but Igor is better.

If I were NYI I'd go with less of a tandem and more of a Sorokin starter Varlamalov backup situation (if they haven't already).

Then a bunch of young premium star potential players like Byfield (who is still only 19 years old until August - he was very young when drafted), Alex Turcotte, and a bunch of other prospects who are on the cusp.


I've been saying this most of the season. Both of them get better with more regular work. Sorokin started slow but was on fire playing almost every night. Then Varlamov came back and when they started alternating Sorokin's play dropped off and Varlamov has never gotten into a rhythm.

Shesterkin is playing really well, but I think a definitive conclusion on the better goalie is a little premature unless you are talking about this season is isolation.
Yes,
pjcas18 : 1/25/2022 8:43 am : link
I meant this season for Igor vs Ilya. goalies performance fluctuates. Look at Binnington right now (and about a hundred other goalies who caught a hot streak, rode it, then lost it).

Adam Fox
Ira : 1/25/2022 9:05 am : link
postgame interview.
Link - ( New Window )
I was at the game last night
ShockNRoll : 1/25/2022 9:05 am : link
As someone who hates the shootout, I have to say that last night's shootout was really entertaining. I thought it was awesome that Byfield and Lafreniere scored in the shootout back to back. Panarin mishandled the puck on his shootout attempt, I was shocked that he was able to re-gather it and beat Quick.

I continue to be concerned with their 5 on 5 play. The only line that really generated any 5 on 5 pressure last night was Panarin-Strome-Goodrow. Quick didn't have that difficult of a night, though that save on Trouba was remarkable. They did pretty well in the 3rd period, but a great 60 minute game 5 on 5 is very rare for the Rangers this year. But, they win games with great goaltending and enough skill to break through when they need to. Fox is a magician. I'm not going to get too much into the Fox/Makar debate, let's just say you can't go wrong with either. That said, I don't think I've ever seen someone process the game the way Fox does.
IMHO if the Rangers don’t start playing a full 60 minute game on 5v5
Rick in Dallas : 1/25/2022 9:18 am : link
They will be a early out in the playoffs.
Right now they are depending too much on great goaltending and special teams.
Offensively, they are not deep enough in the 4 lines that play. They are depending way too much on 4 or 5 guys for their offense.
Having said all that I am really excited how far the Rangers have come in their total rebuild.
It’s been a fun year watching them play on my iPhone via ESPN +
Go Rangers
RE: I was at the game last night
Snablats : 1/25/2022 10:03 am : link
In comment 15573429 ShockNRoll said:

Then you didnt see Brian Leetch, who did it in a much more physically demanding era
I think Schneider
ManningLobsItBurressAlone : 1/25/2022 10:33 am : link
has been very impressive in his short time with the big club, and in my opinion, deserves to remain up. Hell, Hajek even acquitted himself nicely in last night's game. Teams can do a lot worse than Hajek for a 7th defensemen, as we let Nils continue to get comfortable in the AHL. I thought Barron bounced back nicely in the 2nd half of the game, especially in the OT.


I saw Leetch, I think he was a more physically gifted player than Fox, I'm talking more about Fox's subtle motions, patience, etc. Leetch is my all-time favorite Ranger, I'm not saying Fox is better or anything. I'm talking more from a hockey IQ standpoint.
RE: IMHO if the Rangers don’t start playing a full 60 minute game on 5v5
ColHowPepper : 1/25/2022 1:20 pm : link
In comment 15573457 Rick in Dallas said:
Pretty much spot on, imo, Rick. I'd add that, outside Fox, Trouba, and pretty much steady Eddie Lindgren, still questions in my mind about the proper pairings (I posted late after Friday's game on d-men, incl. JT's terrific season), focused on KAM. It would not be easy to break up 2nd pairing as JT and he have worked together for 1.5 seasons now, but it would be in my mind to move #45 up.


Way too early to know. He looks good to my untrained scouting eye in what little I’ve seen of him, but he hasn’t made a major impact yet (hasn’t played very much due to a variety of circumstances). As someone above said, he’s still super young. Him and Turcotte both look good but haven’t been the kind of players that come and light up the team in year 1. The Kings are doing well this year because of a truly unexpected renaissance from Doughty and Quick, and to a lesser extent Kopitar (though Doughty and Quick are more “returning to their old form” while Kopitar has been pretty good all along).

Last night's shootout
ColHowPepper : 1/25/2022 1:29 pm : link
was entertaining as hell. It was funny when GG was asked about, 'why Fox? How did you come up with him?' And coach said, 'Foxy told me early in the season he doesn't like it, but with how he played in the OT and running down our list, I asked him and he said ok.'

Lindgren was grinning like a cheshire cat when he came out to hug Fox, nice chemistry.

I knew in my bones that neither Kreider (it's just not his game to come in close to crease and stickhandle--take your good wrist shot) nor Strome was going to beat Quick. I was scared shitless that Lay would not, as someone above said, after QB scored, the gauntlet was laid down.

One thing about Igor I've noticed this season, to my eyes: I don't think his glove hand is quite as sharp and quick as it was peak last season. He's become a better keeper, so calm and steady and quick. But when he is beaten, as often as not (not counting when d-men leave an empty net for the opponent) it's high on the glove side. That's where Kopitar went on his sharp wrister. Byfield went high to the stick (his right) side across to the far post, pretty nifty shot. So I'm happy when opponents try to deke and shovel in close.
it's too early to talk or proclaim SCF
djm : 1/25/2022 2:12 pm : link
haven't all the good teams had some questionable moments this season? I would think they all have, especially since the Rangers are near the top in terms of pts. They can't be that much worse or more concerning than any other good team.


Do you think Dallas trades Pavelski? They're currently in WC contention. Not saying they can't be sellers, but he is their leading scorer and plays on their top line.
I'd rather have Miller than Pavelski
Greg from LI : 1/25/2022 3:09 pm : link
Miller can play center or wing equally well and is a much tougher, more physical player.
RE: I'd rather have Miller than Pavelski
pjcas18 : 1/25/2022 3:21 pm : link
In comment 15574410 Greg from LI said:


I am a casual Rangers fan. Really glad to see them doing well this year.


Good call, he's been playing much better recently, so not sure if DeBrusk's trade request still stands, but probably the right compensation - DeBrusk and a pick probably.

I also fully expect Krejci to come back to Boston for the playoffs. Or if fully expect is too strong maybe I wouldn't be surprised if he did - any time after the Olympics.
.
BrettNYG10 : 1/26/2022 12:16 pm : link
Sam Stern
@SammmyStern
Here’s the second season ATOI of every forward drafted first overall from 2010-2020:


Yakupov was a bust, but he had a really good rookie year. Sometimes people forget that or never realized it.

the piece of context missing from all this is in Yakupov's (for example) 2nd year EDM was near the bottom of the standings (28th out of 30 teams) so you can and should give young players more time. He rewarded his team by playing zero defense and showing up with a cocky attitude that alienated anyone and everyone around him.

the Rangers are in 1st place and Lafreniere is flashing (IMO) and is a great teammate by all accounts who is growing into the role, but that role is based on team need right now.

Context matters sometimes. and lol, half of those players are/were Oilers it seems (Hall, Nugent Hopkins, Yakupov, McDavid) and they're still struggling.

Kakko has been terrible lately. Guess he was injured. Laf has flashed. I think he needs more ice time.
Pages: 1 2 <<Prev | Show All |