Some info on Flores interview on OC process per Art/Schultz

BeckShepEli : 1/28/2022 1:02 pm
Art- "That's why, I'm hearing, Flores went into yesterday's interview with the Giants expressing an open mind and a desire to put together a collaborative offensive plan. Sounds like Flores is willing to accept the road he was on in Miami won't work in his second chance, if he gets one"

Schultz-"Source says part of Brian Flores’ pitch to the #Giants is being more open to which offensive coaches the organization wants to hire. This is a stark contrast to his time with Chris Grier and the #Dolphins, where Flores was more adamant about coaches/personnel. Smart move by Flo."
Art - ( New Window )
Schultz Tweet
BeckShepEli : 1/28/2022 1:02 pm : link
..
Jordan Tweet - ( New Window )
Again what the hell is wrong at 1925 Giants Way
arniefez : 1/28/2022 1:04 pm : link
why is this public knowledge? Although in the is case it's possible maybe even probable it's coming from his agent. Why can't anything stay a secret in that building?
This guy is literally saying anything to get this job
Brandon Walsh : 1/28/2022 1:05 pm : link
And then when he does will probably turn his old ways. Sounds alot like Mike McCarthy.


My hunch is that Flores agents have been actively feeding the media with information about Giants process to make their client look better. Mara confirmed yesterday that he called Flores to let him know he would be interviewed but how did the media know about it before Schoen was hired as GM? Flores team is leaking this stuff.
.
Matt in SGS : 1/28/2022 1:11 pm : link


I know Bill O'Brien was mentioned, but it sounds like he might return to New England, especially if Josh McDaniels gets hired in Vegas. And Matt Nagy would make sense to return to Kansas City if Eric Bieniemy gets a HC, job.
Flores wanted Herbert
BigBlue7 : 1/28/2022 1:13 pm : link
Dolphins GM and owner wanted Tua 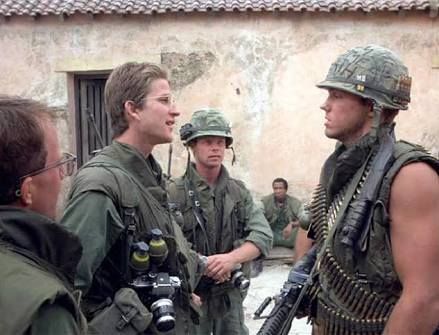 "You talk the talk. Can you walk the walk."
I think its speculation
Lines of Scrimmage : 1/28/2022 1:26 pm : link
He is a smart guy and knew what he had to overcome going into the interview. If was not prepared to answer with a clear cut solution than we should not want him as our HC. My guess is he has been the phones and went into the meeting with options he would have and perhaps said he is open to suggestions.
RE: Breaking news
MotownGIANTS : 1/28/2022 1:26 pm : link
In comment 15580196 Ten Ton Hammer said:

The questions are Will he actually do it? Is he a person that can really self reflective, take constructive critism change and grow? His resume is the most impressive when you look at it in totally to Daboll ... Actuall Quinn would be the close 2nd considering he actually to a team to a SB as the HC vs an Assistant or Coordinator and some could say he should be 1st if you weight that even more heavily.
I do like how 'collaboration' keeps on coming into all the
Jimmy Googs : 1/28/2022 1:27 pm : link
the Giants conversations. 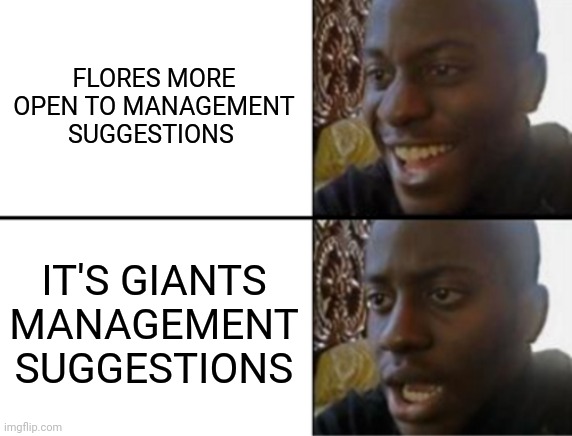 
My feeling as well. It'd be like if Schoen asked ownership to pick a head coach for him because he's not good at it.
The Bills FO
AdamBrag : 1/28/2022 1:51 pm : link
had a ton to do with the Bills offensive scheme. The offense completely changed when they built their analytics department.

I think a major concern by Schoen would be that Flores would insist on running the offense his way. Flores likely made the right statement that he'd be willing to follow the FO's lead on how to run an offense.
Ugh
Blue The Dog : 1/28/2022 1:52 pm : link
So Flores, a guy who couldn't find a competent OC, is saying his plan to fix the offense, is defer to the people that forced Jason Garret on the last coach.

True; funnily enough, Flores has never actually been a DC before. He jumped right from being the New England linebackers coach to the head coaching job at Miami.
RE: The Bills FO
LakeGeorgeGiant : 1/28/2022 2:05 pm : link
In comment 15580277 AdamBrag said:


Read this post a couple times guys. I think this is what's going on here. Flores is trying to cozy up to Schoen here.

Mara isnt picking the OC, but Schoen will likely have an idea of what kind of offense he wants to run.
Wow.
River Mike : 1/28/2022 2:08 pm : link
BBIers are unsurpassed at reading the most extreme negative things into every comment made by anyone connected to the Giants or involved with the Giants. I guess I should find it amusing.
RE: Ugh
Sammo85 : 1/28/2022 2:09 pm : link
In comment 15580279 Blue The Dog said:


Ditto for special teams coordinators, no?

If Garrett was forced on Judge, it was because he had trouble getting solid coordinators and position coaches to join him and the owners seemed to admit they made a mistake trusting a coach who had limited higher level coordinator or any head coaching experience. He had a very small tenure with Alabama and was part of the Pats more closed end staffing network.

This is a sneaky reason why Daboll has value in how many places he's been. He's got a lot of networks/relations mingled about the last 15-18 years in NFL and college.
How is this really a big deal
Chris684 : 1/28/2022 2:19 pm : link
Reports out of Miami were saying he doesn't work well or collaboratively with others.

This sounds to me like Flores was obviously trying to address that.

If stuff is said about someone, should they not try to address what was said?
Even if he is more open,
Dave in Hoboken : 1/28/2022 2:25 pm : link
the problem is that there is no great or good OC for him to bring here. There's just no one available on that level for a defensive minded HC to bring here. And unfortunately, while our defense isn't any great shakes (they're okay), our offense is a ton worse off than our defense and needs to be brought into the 21st century. Daboll has a much better chance of achieving that than a defensive minded HC with no quality OC to bring here.
The
Professor Falken : 1/28/2022 2:33 pm : link
one thing that the Flores team hasn't leaked is that even one person liked working with him in Miami.
There seem to be some good options
Chris684 : 1/28/2022 2:33 pm : link
Why not either Mike Kafka or Mike McDaniel the latter is already an OC but neither call plays in their current role.

Has Joe Brady's star already burned out? What about Jim Caldwell? He's likely not getting any other HC gigs.

only on BBI is the world "collaboration" so frowned upon
UConn4523 : 1/28/2022 2:38 pm : link
its been dumbed down to a term describing inability, insecurity, cowardice, and probably murder while we are at it.

He definitely just sat there and said "you guys pick the OC".
I also don't know why it's said
Chris684 : 1/28/2022 2:44 pm : link
that there are these offensive geniuses taking over the sport and you need one to compete.

Look underneath the hood. For every single one of these so called "geniuses" there are a stud/franchise/top 10 QBs with the exception of maybe only Shannahan.


I don't even think any team has nterviewed Bieniemy. I think his only hope of ever becoming a HC is if Reid wins the Superbowl in KC this year and decides he's going out on top.
RE: Breaking news
Festina Lente : 1/28/2022 3:14 pm : link
In comment 15580196 Ten Ton Hammer said:


Hahaha!
If John Mara wants “consistency”
STLGiant : 1/28/2022 3:45 pm : link
Flores’ record doesn’t illustrate that no matter what he saying he’ll do in the future. We are creatures of habit. One just doesn’t change cold Turkey…then again Mara’s gave Kerry Collins a chance…