All 8 playoff teams have clinched, only jockeying for position/seeding is left.

All teams have anywhere from 2 to 4 games left.

If nothing changes the 1st round matchups would be:

If I'm the Rangers I'm fine where I am and they have clinched at worst the 2 seed in the Metro. I'd rather play the Pens than the Bruins.

I will add the West in a separate post (5 teams have clinched and basically 4 teams vying for the final 3 spots).

26 years old, good on the dots, defensively responsible, can play SH and in a pinch PP, with some scoring punch. Under contract the next 3 years @ a fair $4.45M.


This isn't a Rangers thread, I said teams who need a C in general.

And who is a 2C? How many 2C's are better than Dvorak and for the price?

Tavares? Point/Stamkos? Pettersson? Draisaitl when he's not on a line with McDavid?

The Avs won a cup with Kadri or Compher as their 2C.

Look up Kadri's 25/26 year old stats and tell me how he's better than Dvorak.

The Panthers won the East with Sam Bennett as their 2C. Which areas is Bennett better than Dvorak.


and they suggest pairing him with Panarin.

The Rangers need a proven guy, not someone making 4.3 whom you hope can raise his game

Unless the NYR are sure they can extend him, that a dicey gamble and would be a costly one (in prospects) and probably a $6M min cap hit for the one year.
Plus, as talented as he is
Greg from LI : 6/29/2022 12:18 pm : link
PLD has pushed his way out of two organizations now. Seems like something of a malcontent, frankly.

a top prospect + a 1st round pick.

Wow did the Devil's dodge a bullet there. Not that I was ever that into getting him. You have to be careful evaluating guys who had big point spikes this year. Scoring went through the roof this year. I don't mind the Devils spending for an elite fwd like DeBrincat or Pasta or Johnny Hockey as a UFA. However 8 mill a year for a talent like Fiala just isn't good use of our space right now.
Brayden Point
pjcas18 : 6/29/2022 7:36 pm : link
played with a torn quad two games in the SCF. He was injured vs Toronto in the first round.

I agree, those 3 are the only three I would be willing to sign for market value and I would add Tkachuk to that list obviously if the Flames re-sign Gaudreau and have to move Tkachuk but I don’t see a chance in hell of that happening.

There are maybe two or three players I'd put above Tkachuk right now.

I agree, Tkachuk is one of the few players I would be willing to move the 2nd overall pick for but again the Flames would never go for it. I would be willing to surrender the #2 overall pick, Alexander Holtz, and a couple of 2nd round picks for Tkachuk.
RE: RE: I'd rather have Matthew Tkachuk
ColHowPepper : 6/30/2022 10:52 am : link
In comment 15744358 Jay on the Island said:

In order to sign him to an offer sheet you would need to pay 4 first round picks if he accepts it.

Elliotte Friedman
@FriedgeHNIC
·
27m
TB has some tough choices to make. It's not what they want to do, but what they might have to do

He is what the Rangers need defensively, a top LD. But Tampa would have to retain salary, and he is 33
From Staple in the Athletic 30 minutes ago
Snablats : 6/30/2022 6:33 pm : link
"Two league sources told The Athletic that Chytil has been the most talked-about Ranger in Drury’s various trade conversations and that the Rangers are willing to lose Chytil in order to acquire an older, more established top-six center."

"The sources said that Chytil and Kakko could potentially wind up in a deal, though it’s certain Drury would only package them both for the likes of Scheifele or Larkin, and it’s not known if the Rangers and Red Wings have spoken about the Detroit captain, who has one season left at a $6.1 million AAV before hitting unrestricted free agency."

"Shedding Chytil and Kakko, both of whom would need new deals in the next year or two, could be a wash against the salary cap. And the Rangers may see a clearer path for Will Cuylle and Brennan Othmann in the top nine with Chytil and Kakko gone"

Sportsnet
@Sportsnet
·
2h
Oilers winger Jesse Puljujarvi is once again seeking an exit from Edmonton. This time, the club appears willing to oblige the former fourth-overall pick with a trade.
.
pjcas18 : 6/30/2022 9:12 pm : link
Kevin Weekes
@KevinWeekes
**Keep an eye 👁 on ** While there is no concrete signed deal, sources tell me Rick Tocchet is the leading candidate at present time for the HC of the @NHLJets
. The situation remains fluid, but I’m told it’s Tocchet’s decision to make . @espn
@NHL
#HockeyTwitter
an example
pjcas18 : 6/30/2022 9:20 pm : link
of just how wrong sometimes scouts can be lol. Someone re-tweeted this today and the guy then went and deleted the original. but, as they say, the internet is forever...

this guy was a paid scout. In fairness, Strome went #3 overall so it's not like he was a late round pick, but how do you miss this bad as a professional? maybe explains his short career as a scout. 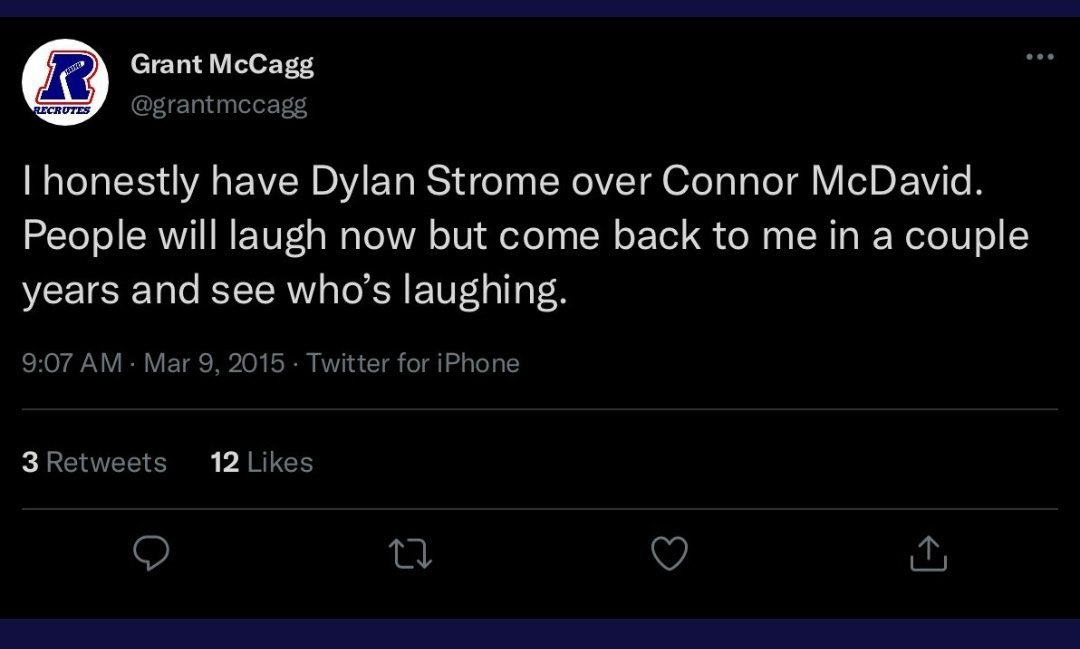 Murls
@mattmurley19
· 11h
Hearing Jim Montgomery is the next coach of the Boston Bruins. Absolute unreal hire!!! #insider @NHLBruins @marinakmaher @FeitsBarstool @spittinchiclets @BizNasty2point0 @ryanwhitney6
.
pjcas18 : 8:46 am : link
Elliotte Friedman
@FriedgeHNIC
·
34m
Not sure what’s happening with GM search in SJ, but it appears that the Sharks have made a coaching change. Word late last night was Bob Boughner was informed he will not be returning.
And apparently Drury is very interested in Name Kadri
Anakim : 12:52 pm : link
Who would be a fantastic fit, but again, where is this money coming from?
If the Rangers go the route of "better than Copp/Strome"
Snablats : 1:22 pm : link
then, as I've said for a month, the money comes from trading Chytil and/or Kakko

And Staple's article I posted yesterday says they are looking into that very scenario
PJ Have you seen this
Jay on the Island : 1:23 pm : link
Pierre LeBrun: “There are some who believe that Montreal is waiting to see if the Devils make a move closer to the first round in terms of picking up the phone and asking Montreal what it would take to flip the No.1 and No. 2 picks so that the Devils can make sure they can get their hands on winger Juraj Slafkovsky. But the Devils are telling people ‘if a centre is the best player available in our eyes, we have no problem with taking another centre,’ even though the Devils have Jack Hughes and Nico Hischier.” [TSN]

Corey Pronman with an interesting pick for the Devils here in this mock draft. “If Slafkovsky goes No. 1, it opens up the possibilities. League sources seem somewhat skeptical they will take Wright, or at least they don’t view this as the likeliest scenario.”
RE: One player
Will Shine : 1:53 pm : link
In comment 15742698 pjcas18 said:


well Gorton has deep knowledge on most of the Rangers prospects.
RE: From Staple in the Athletic 30 minutes ago
Will Shine : 1:56 pm : link
In comment 15745123 Snablats said:


Giving up chips for a guy close to Free Agency makes no sense given who they have to renew over the next few years.
Dylan Larkin doesn't move the needle for me at all
Greg from LI : 2:08 pm : link
Don't see the point there.

Somehow, Rick Bowness got hired to yet another head coaching job.
RE: RE: From Staple in the Athletic 30 minutes ago
Snablats : 2:26 pm : link
In comment 15745860 Will Shine said: