Eric from BBI : Admin : 4/30/2022 2:06 pm
...
Good
Mark from Jersey : 4/30/2022 2:07 pm : link
blitzer apparently.
I think
RicFlair : 4/30/2022 2:08 pm : link
This guy starts.
5th round projection
jeff57 : 4/30/2022 2:09 pm : link
Indiana’s Micah McFadden enters the draft after a stellar four-year career for the Hoosiers. A three-year starter at MIKE backer where he earned All-American honors as a junior and senior. McFadden has above average size and athleticism for the position but lacks top-end length. A physical, downhill player, McFadden plays the game with his hair on fire and is an attacking player in both phases. In the run game, McFadden displays very good eyes and instincts to diagnose run and is quick to trigger downhill. He is a physical player who has a nose for the football and is a very good tackler in the box. His lack of length and power at the point of attack is evident in the run game as he struggles to deconstruct blocks and will get covered up by bigger offensive tackles. In the passing game, McFadden is an attacking linebacker who is brought on A-gap blitzes on most passing downs. He displays excellent timing and burst to shoot gaps and make plays in the backfield. His lack of length does appear as a blitzer as there are times he is just a second late to finish. He displays good overall ability in zone coverage, having the eyes and awareness to hit his landmark, and is quick to trigger with things in front of his face. In man coverage, he possesses good straight-line speed but shows stiffness in space as it pertains to changing direction. Overall, McFadden possesses the necessary instincts, toughness, and straight-line speed to be an effective player, especially as a blitzer on passing downs, but his lack of strength and fluidity will make it hard for him to ever become a full-time starter at the next level.
Link - ( New Window )
Gook value pick in the 5th.
solarmike : 4/30/2022 2:10 pm : link
I like him a lot.
RE: Gook value pick in the 5th.
RicFlair : 4/30/2022 2:11 pm : link
In comment 15692311 solarmike said:


Did he even have a ranking on him?


Damn, why did we take him then?
Sy'56
Eric from BBI : Admin : 4/30/2022 2:22 pm : link
Summary: Senior entry from Tampa, FL. Three-year starter that earned honorable mention All-Big 10 honors in 2019, first team in 2020, second team in 2021. Also a third team All-American in 2019. McFadden is a well-put together, quick and sudden linebacker that flies all over the field and brings a high success rate as a tackler. He can defend the inside run with stout power and will get to the sideline against the outside running game. He excels in pursuit. McFadden does have the occasional lapse in concentration and will over-pursue his intentions, leaving him vulnerable and top heavy. He does not factor well in man coverage, as his hip tightness and eager mentality can be easy to toy with. He projects as a solid special teamer that could develop into a rotational inside linebacker in a 3-4 front.
Don’t know much about McFadden but love seeing this
Eric on Li : 4/30/2022 2:23 pm : link 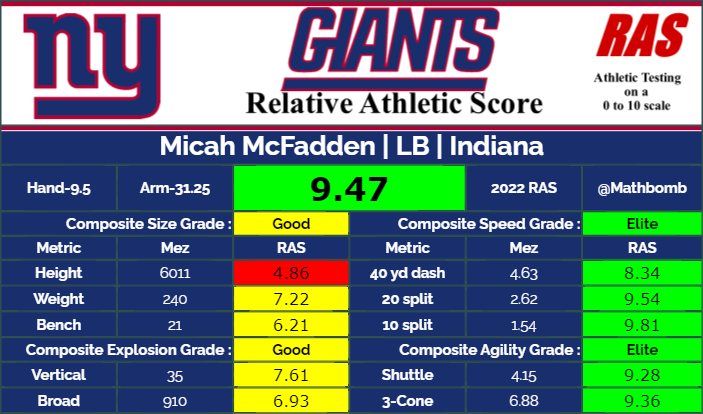 
Here is the rank and grade:

Dependable and smart bruiser with surprising game speed to the sideline. High success rate as a tackler and will reach his points in coverage. Has the ceiling of an elite special teamer + solid starter.
RE: RE: RE: Sy likes him
bw in dc : 4/30/2022 2:42 pm : link
In comment 15692368 The Mike said:


Gracias. On my phone at my son's baseball game.

The war is over Mike.