Am I misremembering, or is Kurt Warner FOS?

Don't like this calling out people via Twitter. Pick up the phone KW. Like he is willing to assist the young man but could do without calling out others or looking for a pat on the back.
I think KW was salty about being benched
Giantfan in skinland : 5/9/2022 7:42 am : link
and feeling like he didn't get a fair shot.

My recollection is that he was still always good to Eli (and I think they've both talked about that aspect).
...
Mdgiantsfan : 5/9/2022 7:47 am : link
I watched that interview and immediately thought he was coloring that part of his history with Eli with some vibrant colors...when in actuality it felt much darker lol. I was hoping he would reference his experience with Eli as an example, but he never did. Which only added to my recollection to that time.
RE: Early on he was not the best
NYGgolfer : 5/9/2022 8:06 am : link
In comment 15702617 Lines of Scrimmage said:


Mostly recall the same as above.

Eli definitely said Warner was helpful but that could also just have been Eli taking the high road because he had class.

Warner has had instances of putting off some with his choice of words and edgy opinions since he left the field of play.

was a total hypocrite when it came to being a good teammate
Eli
ron mexico : 5/9/2022 8:27 am : link
remembers it differently


Eli Manning
@EliManning
Thanks for being such a class act and great mentor for me.
Kurt Warner
@kurt13warner
I know what my man #FitzMagic is feeling, in 04 w/ NYG we were playoff team after 9 games (& i wasn’t playing as well as Fitz) when they moved 2 @EliManning - sucked 4 me - but I knew it wasn’t about that season but the future & I’d have to say it worked out pretty well 4 Gmen!
Link - ( New Window )
Warner wasn't happy he was benched and
Enzo : 5/9/2022 8:40 am : link
he was critical of Eli once Waner became an analyst. But I don't recall reports of Warner not being a a good teammate during that one season they spent together.
I think Warner was good to Eli
Rudy5757 : 5/9/2022 8:41 am : link
I think it was the benching that pissed him off. I do think if Warner finished the season we would have made the playoffs that year but it was about getting Eli some reps and we had a bad stretch of games so the timing was right.
Initially Warner was butt-hurt and whiny about being benched
PatersonPlank : 5/9/2022 8:50 am : link
Eventually he got his head around it and was helpful. So in a sense both points of view are true
There is a big difference in situations though
Rudy5757 : 5/9/2022 9:12 am : link
Warner was brought in after Eli was drafted so he knew it was a short term gig and why he was brought in. Tannehill has been the incumbent and they drafted a guy to replace him.
Yeah, KW might have been butt-hurt,
Big Blue '56 : 5/9/2022 9:16 am : link
but even though he was doing ok getting us off to a 5-2 start (then losing 2 straight and being replaced by Eli), he was specifically brought in to get Eli ready to start that year and KW knew that..
And save for Tiki(who deserved it), who has Eli ever bad mouthed?
Big Blue '56 : 5/9/2022 9:18 am : link
So saying nice things about KW is Eli being Eli, even if KW did give him advice from time to time, imv
RE: I thought it was
upnyg : 5/9/2022 9:19 am : link
In comment 15702611 johnnyb said:

That's what I remember. I think the team wanted Warner to finish the season becasue they had a winning record, but he was still recovering from his thumb injury.
His original advice to Tannehill was correct,
Section331 : 5/9/2022 9:21 am : link
it is ridiculous to ask the starting QB to mentor his backup. If he chooses to, great, but his responsibility is to get himself ready to play.

That is not how this went down. This is spin. We talked about this for years. He was pissed at being benched. Maybe by the end of it he sucked it up. But that would be the same thing for Ryan give him some time to live with it, not just jump on him for his initial reaction and hurt.
RE: I thought it was
jnoble : 5/9/2022 9:25 am : link
In comment 15702611 johnnyb said:


Kerry said after the Giants hired Tom Coughlin, Coughlin walked past in the hallway and didn't even look at him he knew his time with the Giants was over. It probably wasn't just that they drafted Eli
getting pissed about being bench is not only normal
UConn4523 : 5/9/2022 9:33 am : link
it should be expected. I don't think that's a sleight on Warner at all. I also don't remember him being shitty to Eli, I think that was more something fans made up to be pissed about something.
I remember him thinking he didn't deserve to lose his job...
sb from NYT Forum : 5/9/2022 9:43 am : link
...because he had a winning record for the Giants at that time.


He was an interception and sack taking machine. Years ago, there were these funny Tecmo Bowl gifs someone created and, Kurt Warner was one of them. He just stood there for about 15 seconds and then gets sacked. Completely accurate.
seems like Eli was good with Kurt
widmerseyebrow : 5/9/2022 9:54 am : link 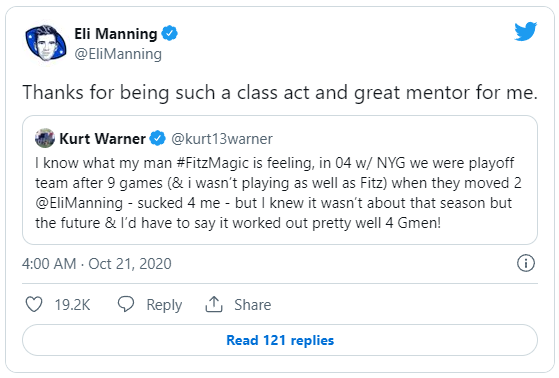 He seems to have mentored Eli
Matt M. : 5/9/2022 9:57 am : link
Eli says as much. Where it went sideways was when he didn't like getting benched at 5-4, on the fringe of a playoff hunt. Many fans agreed with him at the time. We essentially threw away the rest of the season, for the long term benefits.

About to go up 3 scores and then your whole season unravels after one penalty call?

Do other teams do that shit?
Far as I remember
JonC : 5/9/2022 10:25 am : link
he was salty about losing the starting job, but it was very clearly related to his concussions flaring up, causing him to be ineffective, struggled with decisions, etc. But, it seemed like he mentored Eli at least to some extent, though I didn't get the sense he was 100% into it.
It’s generally a safe bet that Kurt Warner is full of sh!t.
Big Blue Blogger : 5/9/2022 10:47 am : link
In this case, though, it’s complicated. He was a complete ass about getting benched at 5-4. A month later, he had made his peace with Coughlin’s decision, which was clearly the correct one because that team was going nowhere.
RE: Early on he was not the best
Gatorade Dunk : 5/9/2022 10:51 am : link
In comment 15702617 Lines of Scrimmage said:

Yes Collins flat out refused and that was the end of his Giants tenure. Warner was brought in and was very vocal about being benched when we were 5-4. Actually there grumblings from a few of the vets on the team (most notably Tiki Barber).

Hard to know how much he "mentored" (or not) Eli while he was here.
RE: Early on he was not the best
ElitoCanton : 5/9/2022 11:02 am : link
Nonsense. Not only was he not helpful, but he was a passive aggressive asshole who took shots at Eli in the media for years after he left.


I read an article interviewing Collins after he retired, and in it he did say that the Giants offered him the opportunity to stay with the Giants and mentor Eli but he had no interest in doing that and instead chose to move on.
......
Route 9 : 5/9/2022 12:21 pm : link
Yep. Not only did they not do anything on offense from that point on (penalty) it seems as if they just hit a "moron" button.

Giants actually recovered an onside kick and had a chance but somehow fucking blew it. That game was pure shit. I was really steaming after that one.
......
Route 9 : 5/9/2022 12:24 pm : link
The second Eli was traded for, I knew Collins was a goner.

I remember all the goofy rumors we came up with at the lunch table .... actually all came true.
Warner wanted to play
arniefez : 5/9/2022 12:28 pm : link
He made it known he wasn't happy being benched and the most of the other starters on both sides of the ball weren't happy either. I have no reason to not believe Eli but Warner didn't seem like the mentoring type that year. He was however professional at all times and that could be what Eli is referring too.

Just because a QB isn't happy about being benched
steve in ky : 5/9/2022 1:03 pm : link
while having his team above.500 doesn't have any bearing on whether or not he was a good mentor to Eli. You can be a great mentor and still have a burning desire to compete.

Neither will Charlie Conerly's, even though you claim to have a handle of the fan consensus back then.

If you're old enough to remember #42 and the fan sentiment surrounding him, go play some shuffleboard.
It's complicated, Warner came here, in his mind ...
Manny in CA : 5/9/2022 5:51 pm : link
Not as a "washed up" has-been, but very focused and knowing he had the ability to go to go his 3rd Super Bowl. He felt very disrespected by the Rams. (Recall, how we, here at BBI, heard about it ad nauseam from Kurt's wife).

So there you have it, a frustrated champion wit a huge chip on his shoulder, trying to prove himself, thrown in the water to teach the young kid (Eli) how to swim. Most fans here, were very excited about Eli, not about the possibility of the Old man delivering a Lombardi.

Kurt started, and stunk it up; Eli watched him and learned nothing except the conviction that he could do better.(All this while Archie and brother Peyton whined about why Eli wasn't starting). Kurt grew bitter.

Eli, ever the gentleman that he's always been, kept and remains complimentary and gracious to Kurt. Kurt, these days, sees a little bit of his old ugly self in guys like Tannehill who are not interested in passing the baton, and doesn't like it.


Thanks Gator ...
Manny in CA : 5/9/2022 5:59 pm : link
Don't have a shuffleboard stick, guess my walking cane will have to do.
Those games back then with Kurt Warner holding that ball
Jimmy Googs : 5/9/2022 6:03 pm : link
so long and then ultimately taking the sack or whatever...were excruciating. He had to have been dealing with some concussion or brain issues. He also had that thumb or finger thing going on with his throwing hand which he always denied.


IIRC, Hester ran back a punt or KO for a TD too.
Maybe because he matured over the last 18 years
MtDizzle : 5/10/2022 10:44 am : link
And sees the errors of his ways. He’s a competitor he knew he still had gas left in the tank and he wanted to play, so what’s the big deal? I mean it wasn’t like he made Eli carry his bags and treated Eli badly. I recall Eli mentioning how Kurt prepared him to be a professional and they have a pretty decent relationship today. Some of you fans have vendettas that you’ll never let go it’s weird.
RE: The '04 season was a weird one...
Route 9 : 5/10/2022 2:05 pm : link
In comment 15703682 SFGFNCGiantsFan said:

The Giants were deep in Chicago territory and again about to go up 3 possessions but there was a hold on Toomer and Warner fumbled and everything fell apart there. It was a completely different game.