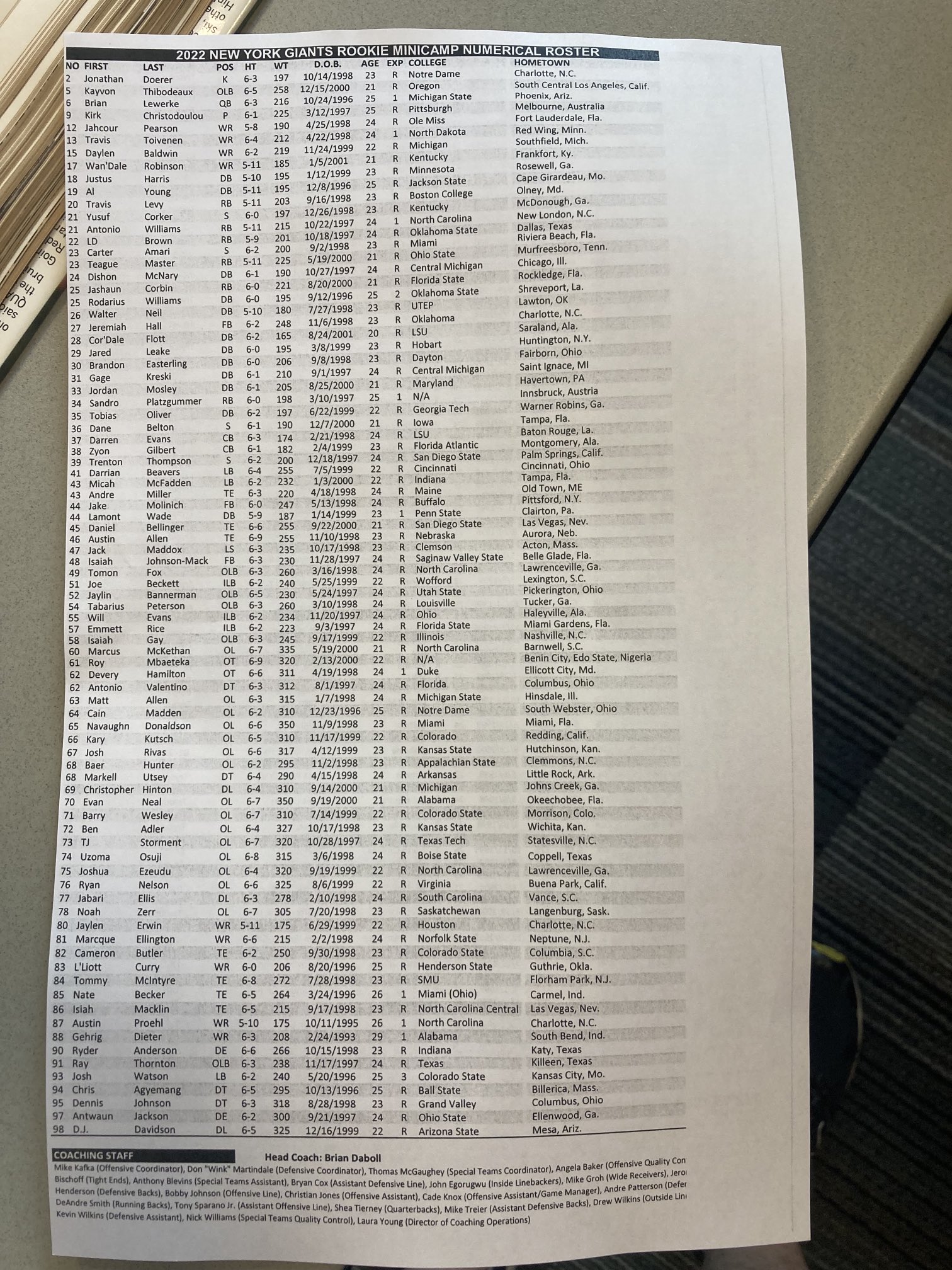 QB Brian Lewerke
RB Sandro Platzgummer
RB Antonio Williams
WR Austin Proehl
WR Travis Toivonen
OL Devery Hamilton
OL Roy Mbaeteka
CB Rodarius Williams
...
Eric from BBI : Admin : 5/13/2022 12:20 pm : link
GiantsWFAN
@giantswfan
#Giants have 17 offensive linemen and 14 defensive backs in rookie minicamp....there is clearly very active radar on those two units
...
Eric from BBI : Admin : 5/13/2022 12:23 pm : link
The Giant Insider Newspaper & Podcast
@GiantInsider
Wan’Dale Robinson showing some hands on punt returns
RE: ...
ColHowPepper : 5/13/2022 12:25 pm : link
In comment 15707588 Eric from BBI said:
Rodarius Williams had a star-crossed '21 camp and abbreviated season. He was decried here because he is so 'old' ~25 by now?
Came in as an outside CB, even though his speed is not elite
Then, to the surprise of many, Judge and DBs coach put him in the slot, where not surprisingly he struggled. He's not a twitchy, easy acceleration guy, so the decision was, well, weird. He got burned, but he competed, kept his head about him, then came the injury.
I am not sure we don't see him at S before too long, because I think his tackling is good.
RE: ...
Professor Falken : 5/13/2022 12:27 pm : link
In comment 15707590 Eric from BBI said:

Master Teague is interesting. Was never the featured guy at Ohio State, but did score two TD's in the national championship game against Alabama last year. Ran a 4.44 40 at Ohio State pro day.
...
Eric from BBI : Admin : 5/13/2022 12:33 pm : link
Art Stapleton
✔
@art_stapleton
Former Ohio State running back Master Teague is a tryout at Giants rookie camp. He was signed as UDFA by the Bears and participated in their rookie camp last weekend.

Ultimately, Bears released Teague and opted to sign Ohio RB De'Montre Tuggle instead.
...
Eric from BBI : Admin : 5/13/2022 12:34 pm : link
Art Stapleton
✔
@art_stapleton
Sounds like Tuggle can be more of an option in the return game, which is why Bears made the switch.

Not in Sy's top 30
...
Eric from BBI : Admin : 5/13/2022 12:42 pm : link
Jordan Raanan
✔
@JordanRaanan
When your GM used to be a college QB (for a minute). Yes, that is Joe Schoen throwing passes at #Giants rookie mini camp.
...
Eric from BBI : Admin : 5/13/2022 12:59 pm : link
GiantsWFAN
@giantswfan
#Giants rookie minicamp 7 on 7 - Wan'Dale Robinson showed impressive quicks and jukes on three straight short catches that would have been big gains
Cain Madden turns 26 late in the season.
Big Blue Blogger : 5/13/2022 1:03 pm : link
Yet another over-age product of the transfer portal. Might be a nice insurance policy to have on the Practice Squad for when injuries hit the interior line. With the team so tight against the cap, short-term promotions to the roster will be easier at the rookie salary; but he's a "technically sound" player with a lot of football under his belt for a rookie. If he gets a contract, he might still have to compete with Josh Rivas and others for a PS slot.
Gehrig Dieter had a well-defined role in Kansas City.
Big Blue Blogger : 5/13/2022 1:18 pm : link
He was the permanent understudy at WR, promoted from the practice squad when Reid needed a body. The expanded PS helped him hang around. He's 29 now. Maybe Deboll sees some value in incorporating the same role here.
...
Eric from BBI : Admin : 5/13/2022 1:23 pm : link
Ralph Vacchiano
✔
@RVacchianoSNY
What’s changed for Kayvon Thibodeaux since he’s been drafted by the Giants?

“Everybody thinks I’m a good guy now.”
Might this be our future punter?
Anakim : 5/13/2022 1:24 pm : link
2020 RAY GUY AWARD SEMIFINALIST: Kirk Christodoulou, Pitt,...Christodoulou (Melbourne, Australia/Balwyn) is averaging 44.7 yards on 51 punts (42.7 net). He has placed 22 inside the 20-yard line and only has one touchback. Christodoulou becomes the first Pitt punter to be named a Ray Guy semifinalist since 2010 when Dan Hutchins was recognized. - Pitt Football

"Australian native Kirk Christodoulou made a name for himself over the past four years as Pitt’s punter. His 41.94 net punting average in 2020 set a school record and Christodoulou was named a semifinalist for the Ray Guy Award, given annually to the nation’s top punter. He earned ACC honorable mention status and was named to the Pro Football Focus All-American team.

Christodoulou continued where he left off in 2021, averaging 41.4 yards as a senior. In the ACC championship game against Wake Forest, Christodoulou had five punts land inside the 20-yard line, matching his career high.

He was named to the ACC academic team for the fourth consecutive year and was named a semifinalist for the William V. Campbell Trophy, presented to college football’s top scholar-athlete.

On Pitt’s pro day, Christodoulou hit some balls off the roof of Pitt’s indoor practice facility before heading outside.


Master Teague III was highly-touted coming out of HS, but never really impressed at Ohio State. He was stuck behind the likes of Trey Sermon, JK Dobbins, Henderson, Mike Weber Jr., etc.
RE: Here is what I have for the tryout players
Anakim : 5/13/2022 1:34 pm : link
In comment 15707669 Eric from BBI said:


Corrected two of the names for you :P
Evan Neal
Professor Falken : 5/13/2022 1:34 pm : link
on the move. Sheesh. When he pulls, I would imagine a lot of DB's making business decisions.
Neal - ( New Window )
Master Teague got Wally Pipp'ed by TreVeyon Henderson last year.
Big Blue Blogger : 5/13/2022 1:35 pm : link
He was surprisingly the Buckeyes' leading scorer in 2020. Got nicked early in a Week 5 game against Maryland in 2021, and only saw significant action in one game after that, a blowout win over Michigan State.