NFT: Why this ‘98 Yankees SI cover is relevant now

Jints in Carolina : 5/19/2022 11:40 am
On the morning that magazine containing Tom Verducci’s accompanying article landed on newsstands and in mailboxes, those Yankees had won 27 of their first 36 games, which is exactly how the 2022 Bombers performed through their first three dozen contests.

The Jeter-Tino-Mo squad, of course, went on win 114 regular-season games and sweep the Padres for the franchise’s 24th World Series championship. Time will tell how history judges this squad, but no one can argue that they are off to a sensational start.

“I think it’s a special group; I do,” manager Aaron Boone said. “There’s a long, long way to go, so we’ve got a ton to prove. I think to this point, we’ve proven that we can win games in a lot of different ways. I think it’s shown up, even on this road trip. This group knows that there’s not just one or two ways we can beat you.” 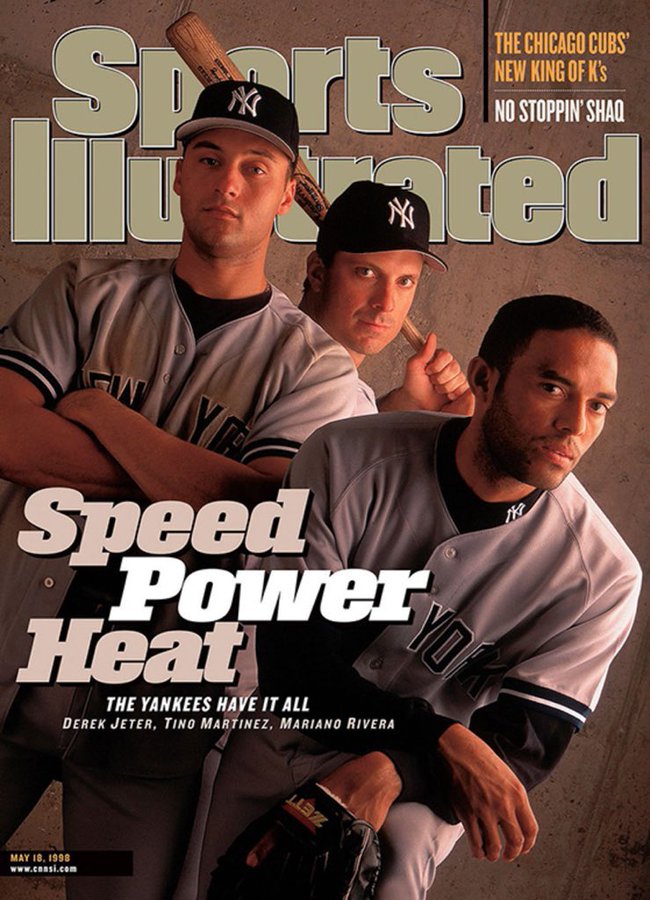 IIRC, Bernie lead the Yanks with 28 HRs. Judge may have that by the All Star break.


Agree on Chapman - but they have King and Holmes. If Chappy was 7th or 8th inning guy nobody would really care.
CF - just consider that Judge. LF, ok maybe Marwin out there(?). Stanton in RF 1/3 to 1/2 the games.
I do not think this is a finished product and if Gallo doesn't improve, I expect Cash will do something about it.


Yeah. I'd always look forward to see what was on the cover. I remember getting pissed at my friend for reading out loud the cover title of the SI cover after Tyson/ Holyfield ear incident. I wanted to soak that in myself!
RE: That team had no weakness
NoPeanutz : 5/19/2022 12:37 pm : link
In comment 15713386 The_Boss said:


"No weaknesses." I distinctly remember reading the SI baseball preview that year, it was Friday night after dinner, looking up and down the batting order and wondering out loud where the outs were. It was just .300+ hitters top to bottom.
Tino
Jeter
Knoblauch
Brosius
Posada
Bernie
ONeil
Slugger's Choice in LF/DH


They virtually never lost. I liken that 98 season to winning 75 games in the NBA or going 16-0 in the NFL like the Pats did, but yea, we know how that turned out. The 98 Yanks did in fact close things out in October while the 07 Pats just couldn't block the NYG legendary defensive front.

98 team was perfect. My god even Shane Spencer went bananas in September and didn't exactly suck in the postseason. So you had this insanely good and deep team, hitting on every cylinder, pitching as well as any team could ever pitch....all that... and oh yea you had this kid from nowhere hitting HRs like 10 games in a row. Yea that team.


They actually had a relatively cool September if memory serves.

In many ways the 99 team was even more dominant, but not until the postseason. The 98 Yanks were scared by Cleveland. Legit scared...down 2-1 in the series before taking off. The 99 team was really never threatened at all. They killed everyone in October and only the Sox really had even a shred of success, winning game 3 after the Yanks jumped out to the 2-0 series lead (they crushed Clemens in that game) ---game 4 comes around and the Yanks destroyed Boston 9-2 and won game five 6-1.

The ATL-Yanks 99 world series had to be most boring series ever. Other than game 3 (yanks won in the 10th) that series was a complete blowout. I honestly don't remember one single moment (maybe Chad Curtis talking shit to that asshole reporter?)


Had that game on in the car on the ride home up the NJ turnpike from college graduation..
......
Route 9 : 5/20/2022 12:10 am : link
I remember that 99 ALCS vs Boston. I no-showed "The Pinelands Experience" in 7th grade just so I could watch that series. Some program where kids sit out in the woods with high schoolers as their team leader/camp counselor for a few days. No red flags at all.

Those were the days.
Important distinctions this year: Middle relievers, The dead ball.
manh george : 5/20/2022 7:44 pm : link
This year's team is puzzling to watch sometimes, until one recalls that we haved entered a new "dead ball era." Imo, players like Jeter and Martinez, as talented as they were, would have had a tough time handling the dead ball, like much of the league is right now. The Yankees have a number of players, starting with Judge and Stanton, who can muscle the dead ball through the ionosphere. On base average against is running an awful median of about .236.

One other difference, of course, is that there were no teams in that era that had the kind of reliever depth the Yanks currently have. Starters never have to get worn out with that much talent behind them. In the playoffs, expect a number of Yankee games to start with "openers."