One team the Mets will have no worries about this year.
in other Mets news…
KDavies : 5/27/2022 8:16 pm : link
Jankowsi out 6-8 weeks after hand surgery. Szapucki sent down. Lopez and Nogosek brought up. Lopez appealed suspension. Knocked down to 1 game. Serving tonight.

After the two losses in SF its time to right the ship - as long as you're looking for the ship to take you to the WS.


Huge win. They needed this.
Pete made a couple good defensive plays
Snablats : 5/28/2022 12:34 am : link
almost gave them back with his usual going to far to his right move

The Mets need to bring in proven veterans for the bullpen. You cant let this team falter because of guys like Shreve and Smith and Rodriguez when you have the money to buy a better pen
Pete with a helluva game all the way around.
speedywheels : 5/28/2022 12:39 am : link
Now take tomorrow and get back to winning series again. 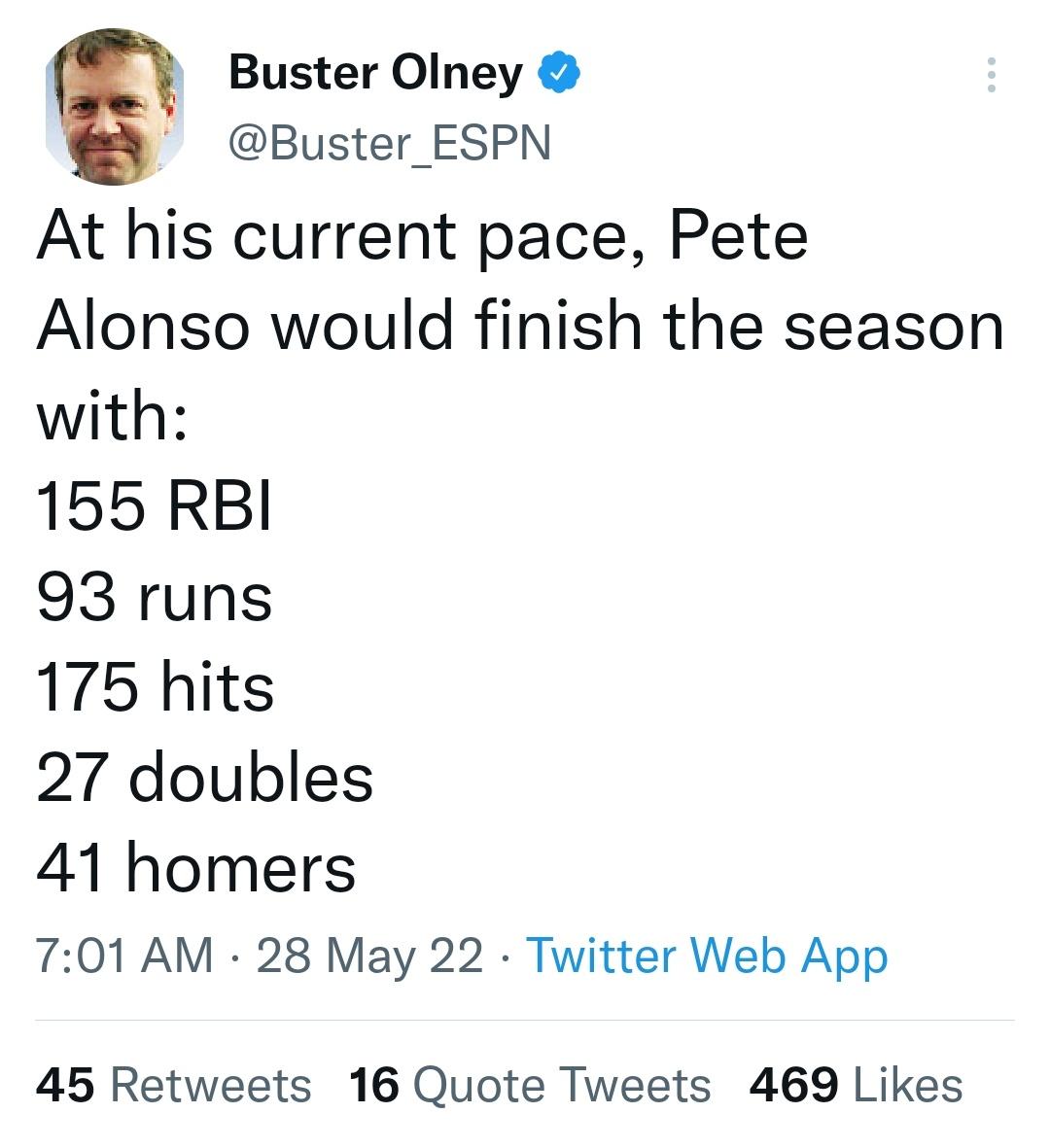 
I can't put Smith in that category right now.


What is so special about Strikeouts now? Fielders can't field any more? I remember when Doc Gooden said he was going to Strikeout fewer batters and let the fielders take some of the pressure off him. It worked out well.

He did not want to be here. Which is different from someone like Wheeler for example who was pissed the Mets never even made an offer.

The Mets likely would have given Noah the $2.5M more he got from the Angels.

but...if Noah stayed I doubt Scherzer was signed and injuries aside I prefer Scherzer if I had to pick one or the other.
Should have kept Wheeler
spike : 5/28/2022 11:31 am : link
F Coupons
i wouldnt be against Noah...
Italianju : 5/28/2022 11:43 am : link
on the mets but he is basically pitching like a 4/5 starter right now. That has value for sure, but it does put you as more a JAG then anything else. He is like 50th in IP in the AL, 60th in K's and hasnt even accumulated enough innings to be ranked in ERA/WHIP. Rankings dont really mean much, i was more using it to make the point he is a JAG i guess. We know wins are a mostly useless stat so his record doesnt really matter to me. His K numbers are awful. SO's are important because the more hitters put the ball in play the more they will get on base and score. Unless you are a guy who consistently has a low BAA on balls in play (Noah doesnt) then its tricky to keep a low ERA (or any advanced ERA stat) when you arent getting K's. His BABIP this year is 259, he hasnt been under 313 since his rookie year. So odds are there is some negative regression coming for him.


Think about it this way...your talking about having Peterson and someone else start maybe up to 10 games...

he's also 38 innings into a season where he will probably hit a wall and get shutdown somewhere between 100-150. So he may be a couple starts away from his season being halfway over.

i wanted him back as much as anyone but the mets dodged a bullet in terms of $. I think they still would have gone for Scherzer even with Syndergaard, but I doubt they'd have also added Bassitt - who is also $10m cheaper than Syndergaard would have been which gives them money to spend elsewhere.


Rangers
Yea but having him would be really handy right now
Debaser : 5/28/2022 7:49 pm : link
I like Bassitt but he stunk up the place recently and has an ERA nearly a point higher .

would be huge if he sticks.

one thing that hurts even more without deGrom and Scherzer is Walker needs to be used more and I'd like to be able to rest him so he's fresh in the 2nd half (unlike last year)
it should help walker that he's more built up by now
Eric on Li : 5/28/2022 9:24 pm : link
2020 he threw 53 innings off basically 2 full lost years.
last year he threw 159 which was the 2nd most of his career and most since 2017.