Pete Townsend said "Rock is Dead" around 1975 or so...and he was basically correct.
I was 13 when Tatoo You came out,and my older friends who loved the stones all complained about it...but as I look back at was a better album then we gave it credit for.
But for me Let it Bleed and Sticky Fingers are so much better than the others
Do yourself a service and put on some headphones and give them a listen...properly.
I guarantee results there!!!
RE: RE: top 3 for me -
AG5686 : 6/19/2022 7:54 pm : link
In comment 15735879 rebel yell said:

Some Girls has some great songs on it...the problem with comparing the early Stones albums with such great great songs on it...Satisfaction for example,those early albums had cover songs on them and make true comparisons difficult
Exile was a double album which should have been a single album.
I just cringe everytime I see it in some top 3 of All Time any artist Rock N Roll.list...as I don't even consider it top 3 or even 5 of THE STONES....
#14 ALL TIME per Rolling Stone
Stan in LA : 6/19/2022 8:42 pm : link

In my younger years I was a big fan of the pre-1968 Rolling Stones. Once Brian Jones wasn't involved, I was never too interested. It reached a point in the 70s where they kind of became voodoo effigies of themselves.

Between the Buttons? Aftermath? 12 x 5? I wore those records out. Exile on Main Street? I don't think I've ever heard it all the way through.

Its funny how that Rolling Stone list changed over the years...I remember 20 plus years ago Ezile was #4 or something
There haven't been 10 good rock albums since that time and now it's #14???
It has a few great songs...the rest is crap
Maybe if it was a single album with only the best stuff I would feel better about it...but I think the press overrated it because of the mythology of it being made in France amidst all the debauchery that was going on as it was being made
A few steps below Let it Bleed and Sticky Fingers....
It's there best
sb from NYT Forum : 6/19/2022 10:49 pm : link
...and if you think it's overrated then you are a bad person.
Ill play
Gmanfandan : 6/20/2022 12:41 am : link
And Exile is not in my top three


Not including Get yer Ya Ya's Out which in reality is No. 1
The run of four albums
Producer : 6/20/2022 1:10 am : link
From beggars to exile is one of the best ever by any band. All four albums are phenomenal and I adore them equally.

I remember k rock playing the whole tattoo you album back in the 80 s. So it’s definitely up there since that was probably there last good album and the proceedings before my time. But exile is a good album.
#1 for me
JB_in_DC : 6/20/2022 7:12 am : link
And imo (any plenty of others, not exactly going on a limb) the greatest rock album ever, probably. It is not a singles album, so I get why some will have others higher. But the whole thing just oozes this chaotic energy. With the blend of blues, country - if you wanted to show an alien what American music in the mid-late 20th century was all about - just stick this on. A VERY sexual record.
Great albums all
BobOnLI : 6/20/2022 7:22 am : link
But still not better than “Who’s Next”.
RE: Ten People
HomerJones45 : 6/20/2022 7:49 am : link
In comment 15735919 GruningsOnTheHill said:
Pretty much the case. There was always other bands that were better, more popular and overshadowed the Stones. No one was talking about Exile on Main Street or even the Rolling Stones in 1972.

God Bless them they stuck together all these years, continued to tour, re-invented themselves about 18 times and kept going.
I'm not old enough to really judge this
Andy in Halifax : 6/20/2022 7:59 am : link
but I would assume after Beggars Banquet (68), Let it Bleed (69) and Sticky Fingers (71) that it would have been considered a bit of a disappointment? Partly due to those being three consecutive incredible rock and roll albums.
Exile is my favorite
Gap92 : 6/20/2022 9:23 am : link
Followed by


Is this based on a quote from Pete or are you referring to his song Long Live Rock?

I agree and can you imagine if they weren't limited to the number of songs that could fit on vinyl and were able to fit Pure And Easy and Let's See Action on the album (two of my favorites that were written for the Lifehouse album (that was never made), but were left off Who's Next due to space)?
RE: RE: Great albums all
trueblueinpw : 6/20/2022 11:04 am : link
In comment 15736033 Gmanfandan said:


I could caucus with idea as well. Who’s Next is a outstanding from the drop of the needle to the very end. There’s isn’t a weak note on the record. Every member of that band was massively talented. The song writing, the music, the engineering and production are all A+. As well, all music is derivative of what’s come before, but unlike a lot of the Stones records already noted, Who’s Next isn’t overtly ripping anything or anyone off. I’m not sure how it happened but The Who seem to have faded in appreciation. But they were an unrivaled rock band, every bit as talented as The Rolling Stones. The Who wasn’t anywhere near as popular or as prolific or as enduring, but as musicians making making rock n roll they were probably a great distance better than the Stones.
RE: RE: Great albums all
Dr. D : 6/20/2022 11:09 am : link
In comment 15736033 Gmanfandan said:

I just saw The Who back in May (for the 10th time). Fantastic show. Glad Pete and Roger didn't die before they got old. And Zak Starkey (Ringo's son) is an animal on drums. His hands/arms are just a blur. Can't even believe how he can do it for 2+ hours.

Here's a pic of young Zak with his Godfather Keith (the story goes Ringo didn't want Zak pursuing a career in music and wouldn't buy him a drum kit. Keith said f*ck that and bought Zak his first drum kit): 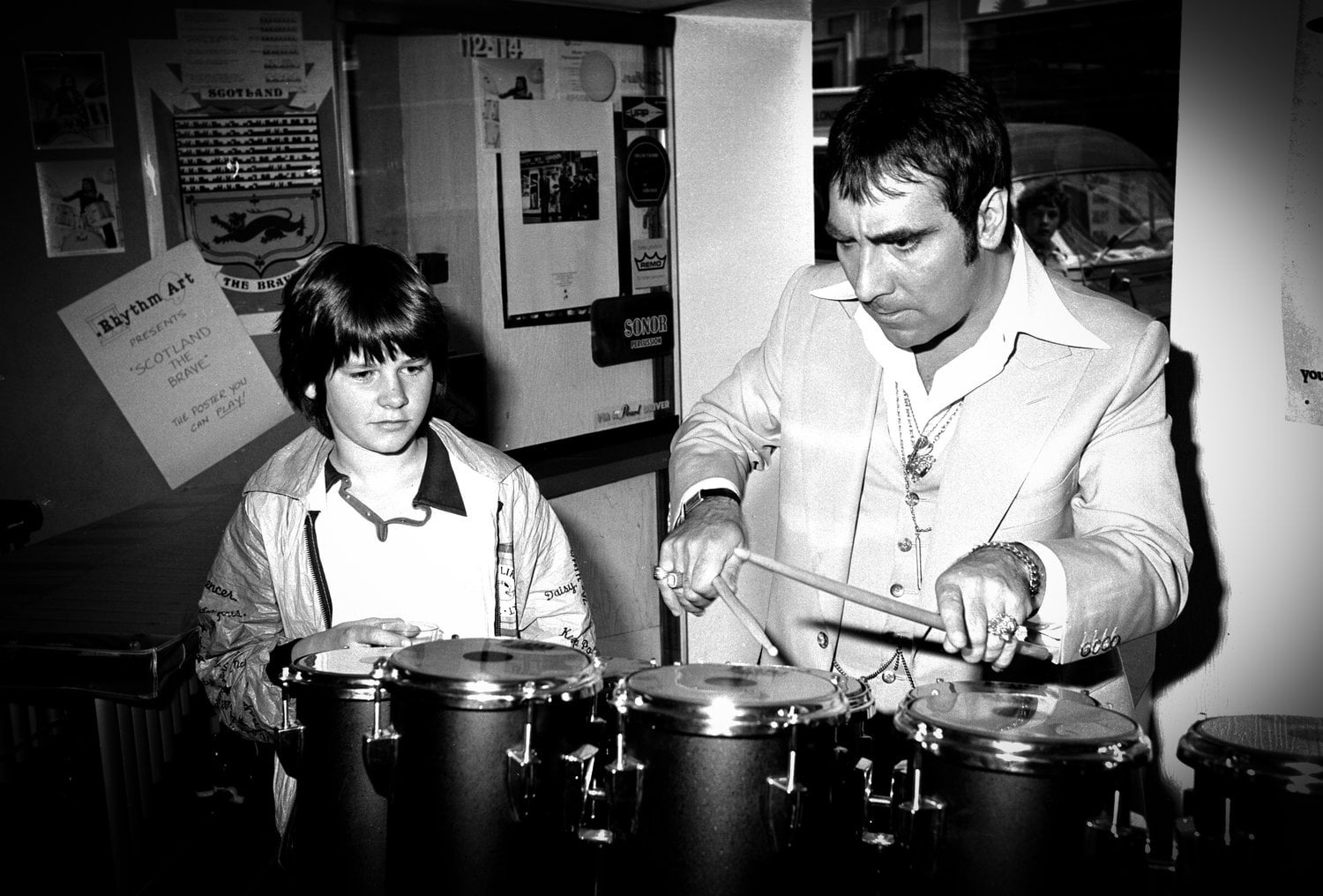 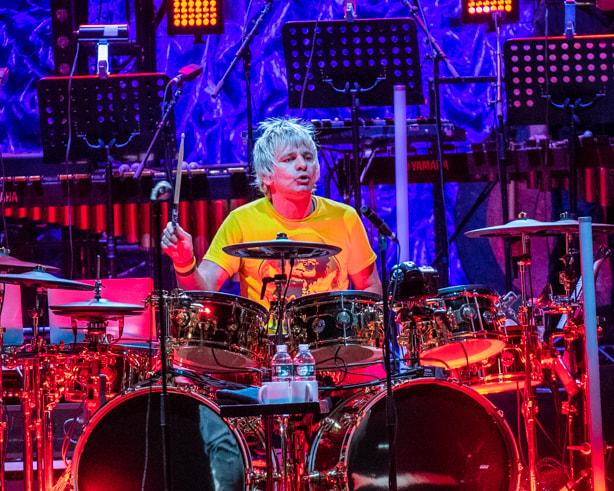 Two of my favorite Stones songs happen to be on Exile (Tumbling Dice and Happy), but i always felt the rest of the album was just ok and I often wondered what I was missing (when some list would have it ranked really high, even say it was best rock album of all time).

I agree with the first paragraph 1000%...
I think you should give Let it Bleed and Sticky Fingers a re listen closely...
There are a few duds in there but its mostly great riff trading back beat with micks great vocals...
I got Sticky Fingers on the Point Pleasant Boardwalk
Peter from NH (formerly CT) : 6/20/2022 2:59 pm : link
Spinning wheel record shop. Had a hot streak betting on the peace sign. Got Dave Mason’s Alone Together in its original psychedelic plastic pressing as well. I think Aqualung as well.

they would still be in the RnR HOF (IMO).

I will let others decide which albums belong in what position but, if there was a Mt Rushmore for Stones' albums - I think it belongs there. I think I remember Jagger saying when it first came out it was panned by the critics (when the Stones re-released a remixed version for it's 30th anniversary? - he was giving interviews regarding "Exile ..) - but seems to have gotten better with time - in the eyes ears of those same critics.