What is going to happen to Mike Glennon?

I think with Grudin out and Payton retired ; there is no where for him to go except ESPN or his couch? 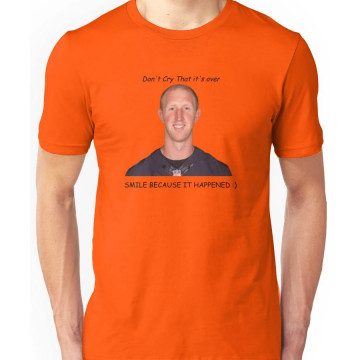 I am serious btw...
Pages: 1 2 <<Prev | Show All |
You think it was fair that Glennon
Debaser : 6/29/2022 2:39 pm : link
had to play week 13 when there was nothing wrong with JOnes neck. A season was already over before it began and instead of looking bad on a team that had given up , he got to take a vacation instead of face the music. WHICH pretty much he created with bad play in weeks 1-3 despite an oline that was actually playing half way decent at the start.

He should have gotten benched after week 3 . I don't know about Glennon but for another QB for sure. It would have been weird to start Glennon there but another rookie of a Mitch Trubisky would have made sense. And shoot if Garner Minshew got benched for him why not Jones?

Also I think a lot of retired athletes in TV commercials over the years have convinced a lot of middle class people that takes like "pro sports are not for you son, hope you got your accounting degree " or whatever. This guys has made like 40 mil playing sports ; he isn't showing up in the empty cublicle next to jim in accounting. Didn't
NoPeanutz : 6/29/2022 3:11 pm : link
he get $28M or something from Chicago? Mike did pretty well for himself.
And he can hold his head high (sorry), bc I think we all believe that he's a better QB than he showed last year.
I think one thing is for sure
Debaser : 6/29/2022 3:15 pm : link
with him out of the league the undisputed neck champion is now Texans D mills ... I read a funny tweet the Texans shoudl sign him and change their name to the Long Necks or something


What does Jones have to do with it? Glennon is a player on the roster and is expected to be ready to play when his number is called.

No offense, but this will be the last post of yours I ever respond to or actually ever read again. You haven't a clue.
His career is probably over or close to it
eric2425ny : 6/29/2022 3:49 pm : link
He’s had chances with Tampa and Chicago to be a starter and failed miserably.


The point I was making is D Jones is obviously given preferential treatment -- which is largely unearned an undeserved -- instead of a fair evaluation of him as QB by Mara. And further subsequent consequences i.e. getting benched much earlier in the season and losing his starting job. Glennon should have been given the start much sooner and if that fell flat on its face D Jones should have had to finish out the season as an evaluation period. Not just been given a pass because he was drafted 6th and we want to make double triple sure he doesn't suck. Weeks 1-3 were obvious.

Glennon got benched as a bear with a similar 1-4 record. The same rules should apply.

LIke I said I don't know how much sense it would have made to go with Glennon much earlier in the season but not sure I have seen an honest evaluation of him as a player from any experts. The closest being Coach Payton who had a high opinion of him and almost drafted him. Coach Grudin same. The Jacksonville coaching staff I guess?? Not sure why the decision that Minshew should be benched but I guess the Philly staff feels the same even though he has pretty good stats.

Also can someone just answer the question please? Where is this guy going to go? Any chance he gets picked up by another team or practice squad or is he retiring and going to espn?
RE: You think it was fair that Glennon
eric2425ny : 6/29/2022 3:53 pm : link
In comment 15743776 Debaser said:


Right so Jones was throwing a football the next day. Glennon played with a fractured hand that required Surgery and his season was over. Jones just magically got better.
RE: I've never seen a worse quarterback than Glennon
Reale01 : 6/29/2022 4:17 pm : link
In comment 15743694 Ben in Tampa said:

As far as Glennon? I’ll see him doing color commentating on MAAC games Tuesday night on ESPN2.
He has a vital role in the NFL...
BamaBlue : 6/29/2022 4:23 pm : link
he's a sure-thing for teams wanting a high draft pick. Why risk throwing games, or tanking when you can put Mike Glennon under center?
Am I confused?
Matt123 : 6/29/2022 4:47 pm : link
Preface by saying that Glennon obviously won't be the answer for any team, but..

Didn't he play an ok/decent/not embarrassing half of football in his first game last year then get concussed and play through it? I don't remember the details, but remember thinking he took a hit to the head and wasn't the same after. Granted that may have knocked him down from a 3/10 to a 1/10, but if the case, I won't knock him.


This poster is a chucklehead, so him coming up with a silly conspiracy theory is just par for the course.

When the more-seasoned veteran posters on the site come up with their own self-made versions of "Clue" is actually when the real fun begins...
holy schnitzkies
George : 6/29/2022 5:49 pm : link
The Giants went 4-6 with Danny Jones at QB.

They proceeded to go 0-7 with Mike Glennon there.


What did you expect from this poster?
I think OP is on the right track
adamg : 6/29/2022 6:44 pm : link
Put Glennon behind this OL and see what he can do
Glennon wasn't awful as a backup for Chicago
Johnny5 : 6/29/2022 7:24 pm : link
But he looked like he didn't belong on a football field for Joe Judge and staff. So I sort of agree Debaser, but at the same time I'll reiterate the same point what does that say for Jones? The offense completely folded up it tents after Jones went down. We were completely uncompetitive without Jones in the lineup.

Tells us a lot about Joe Judges (and the clapper's) scheme and staff. I guess we'll see what Daboll does with what we have here.
as for me
gidiefor : Mod : 6/29/2022 8:22 pm : link
as long as I don't have to watch him on the field in a Giants uniform --I don't really care
Guy made like $75 mil
bradshaw44 : 6/29/2022 11:02 pm : link
Sucking at football. Ok ok he had some mediocre years I’m sure. But he can F off for all I care. He’s a multi millionaire that embarrassed us last year beyond belief. I genuinely don’t give a shit. Why you do is beyond me. Actually we all know this post is for shock value and AD’s on your part.


Yea maybe that is off base. And maybe I am giving Garrett too much credit and he was just pretty bad at play calling. I still think he is better than the worst coach ever that BBi makes him out to be.

I guess maybe that is it ; he was just a average to below average coach. It was just bizarre that the play calling seemed to change so much when Glennon got installed into games.

The deep routes abruptly and just abandoning the run. It was like he just didn't trust Jones with that ; and I have to say I don't blame him. Jones is just not a professional QB. He does not have arm , he doesn't have the processing, he doesn't have any subtlety at all in his game. If you blitz him that will completely mess him up. A year 3 QB who can't respond agaiinst the blitz.

OK chick no offense but you know what your problem is? You think because you spread your legs for some jock in the back seat of a car that makes you some expert on sports.

Right they are highly paid athletes and all that. They are still human beings who get up for competition and mail it in otherwise.

Getting the start in week 13 of a wasted season is now the same thing as being someone who got all the reps in practice ; never had to compete for the job etc.

If you played anything competitive at any kind of high level including high school sports you would know that.


We can use his first 3 years in the league with the buccaneers if you prefer . The point is made that Glennon is a much better quarterback than he let on with the Giants , and is a lot closer to Jones than many realize. Furthermore he should have been given at least 50/50 reps at some point in the season BEFORE week 13 when it was obvious the season was over. Jones got a vacation and while the team didn’t have their golf clubs in the locker roo
— I’m sure many had them hidden in their cars
Who knew Glennon had a BBI account???
BigBluDawg : 6/30/2022 6:35 pm : link
Welcome Mike!! Come in and have a seat. They are kind of a tough crowd at first, but don’t worry you’ll get used to them.
If Glennon was a lot closer to Jones
GNewGiants : 6/30/2022 6:41 pm : link
Why did he play so much worse than him given the same team?
RE: If Glennon was a lot closer to Jones
UConn4523 : 6/30/2022 7:16 pm : link
In comment 15745129 GNewGiants said:


Shhhh, I don’t think he knows they played on the same team in the same season.
Glennon’s career stats look quite similar
cosmicj : 7/1/2022 8:53 am : link
To Jones. In fact, the best pro Jones argument I think is Glennon’s 2021 season. Glennon had a track record of a solid but mediocre NFL backup and arrives at the Giants and posts dismal tape (which likely ends his career). It makes you wonder if Jones is actually improving but was held back by a lousy situation. I don’t think it’s true about Jones but it’s at least an intelligent argument.

And LMAO about Glennon’s future. He earned well over $30 million in his career (not 75), which means he’s probably sitting in his mansion right now worrying about the NASDAQ.
RE: Glennon’s career stats look quite similar
Debaser : 7/1/2022 12:06 pm : link
In comment 15745529 cosmicj said:


THe team just quit starting at week 13. The season was over and in walks Glennon holding the bag.